Game day for the 49ers vs Cardinals arrives and it’s another glorious sunny and warm day in San Jose, as was yesterday when I got here. The forecast is 81º F and no clouds in sight. Breakfast consumed I leave the room at 10.30 am. Kick-off is 1.25 pm so I get a later train than last year, but it then turns up 5 minutes later than advertised. The VTA app works fine to buy my ticket.

I get to Levi’s Stadium at 11.15 am and head for the tailgaters. They seem more louder and raucous than last year. Maybe the optimism for the season ahead is infecting everyone, despite the loss of potential franchise quarterback Jimmy Garrapolo to injury a couple of weeks ago. 🙁

After a good look round and soaking up the brilliant atmosphere in the parking lot, I go inside the stadium at 12.10 pm. I’m in the United Club again and it’s very busy with long lines for food. I was going to walk the concourse first then have lunch but decide to swap this around as it might be even busier in here later, and I could miss kick-off. I have a Louisiana Hot Links sausage that turns out to be very spicy. Having asked the server, she said it was a little spicy but it’s way hotter than ‘a little’. I don’t finish it but it was also quite big. 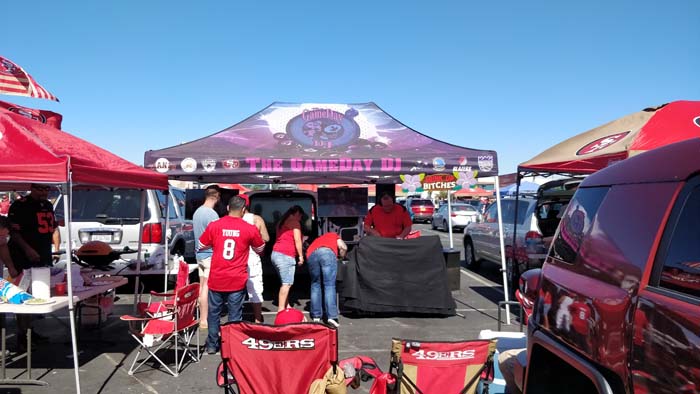 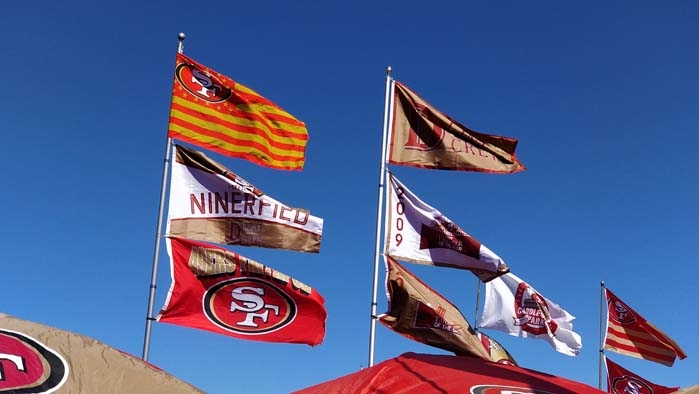 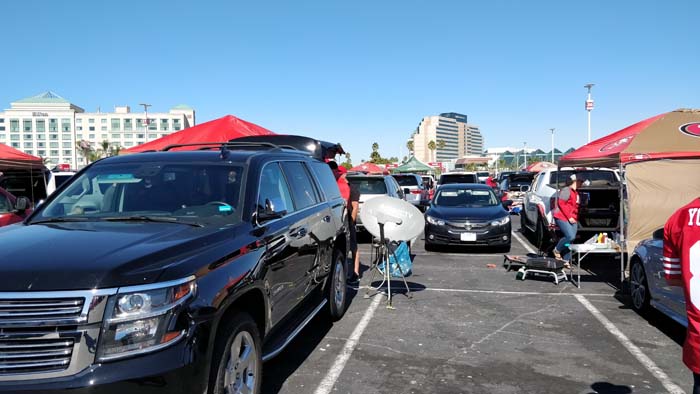 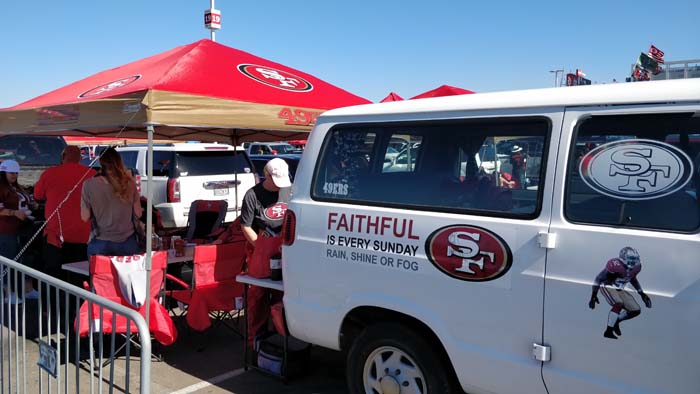 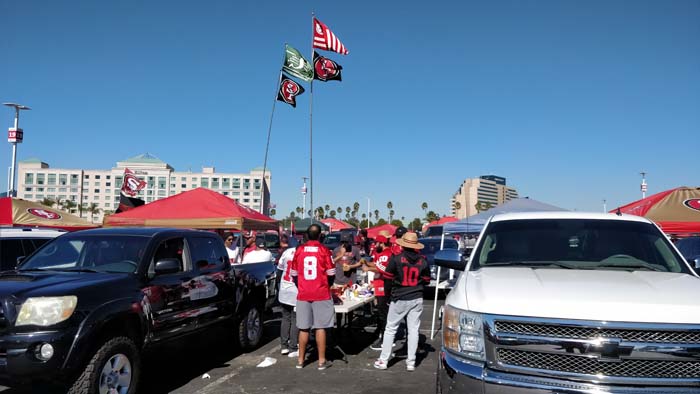 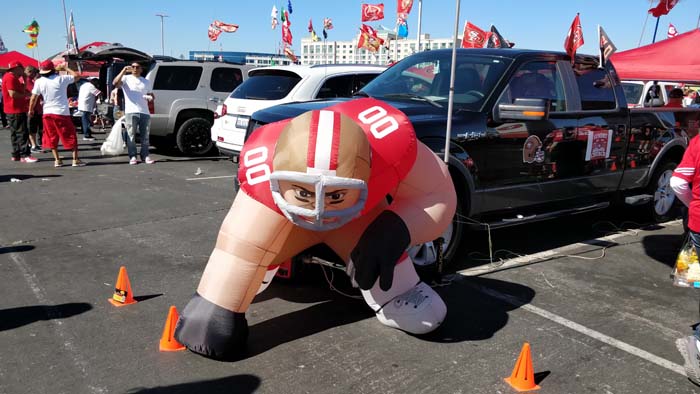 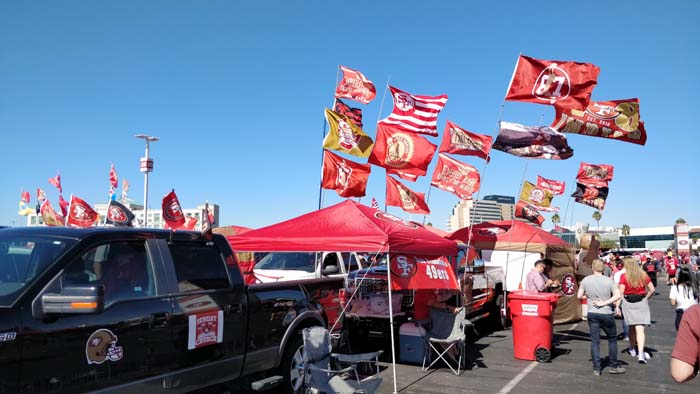 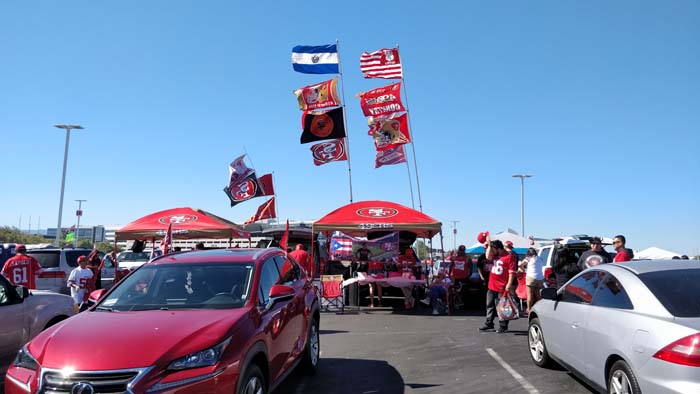 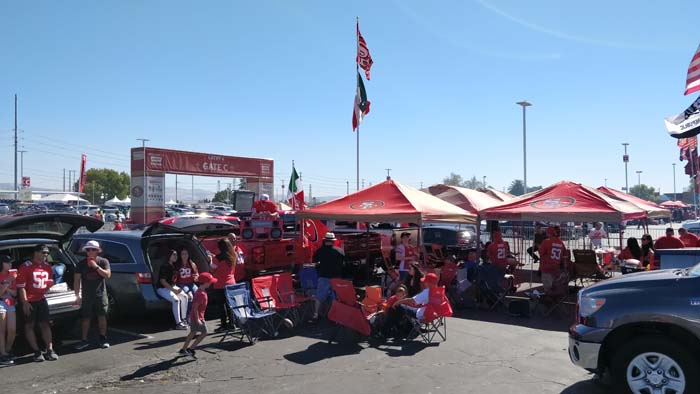 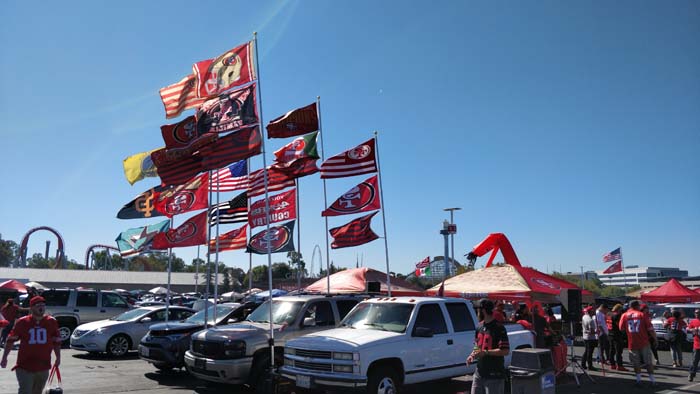 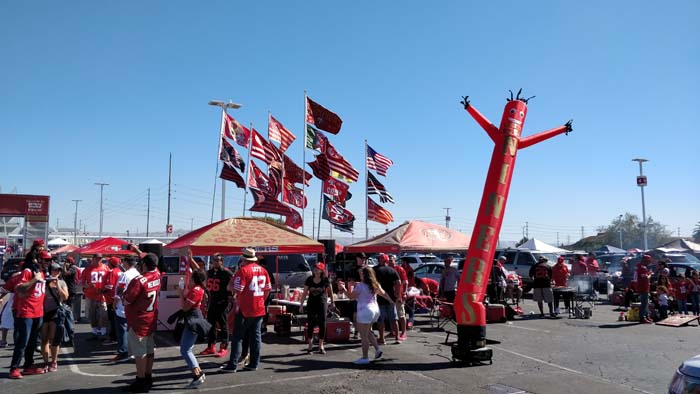 Videos of the tailgate below

Outside into the sunshine again, the concourse hasn’t changed much apart from some new food outlets. There are more than last year and a wider choice. It seems to me as if the food out here is better then inside the Club. ‘Food for thought’ for next year perhaps. There’s also a bigger buzz along the concourse than previous years as well. Circuit completed, back inside the United Club I grab a beer and head to my seat. This year I chose one in the second row up from the pitch, so I’m really close to the 49ers sideline. 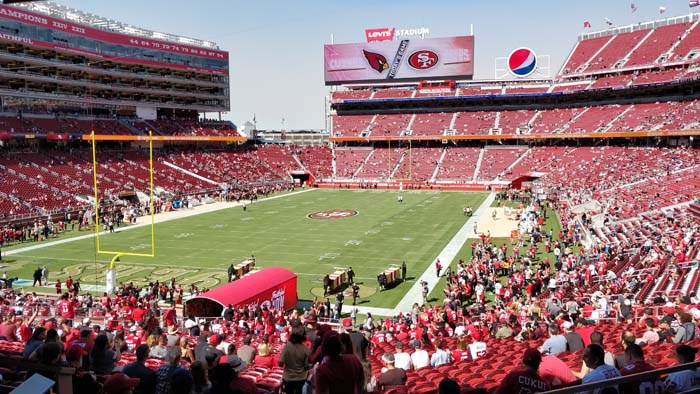 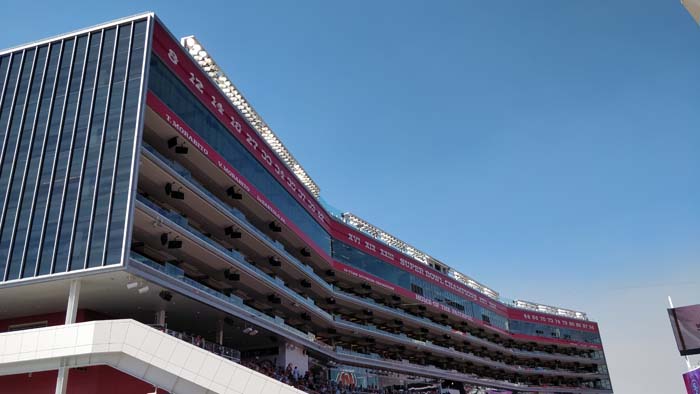 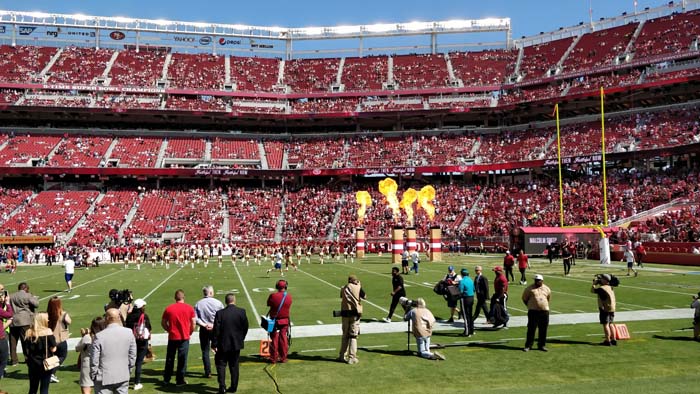 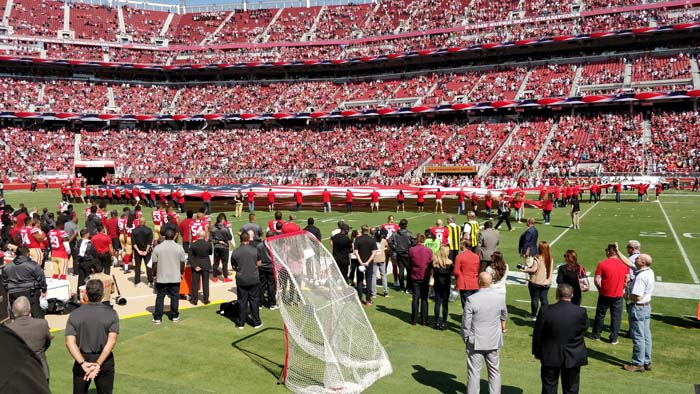 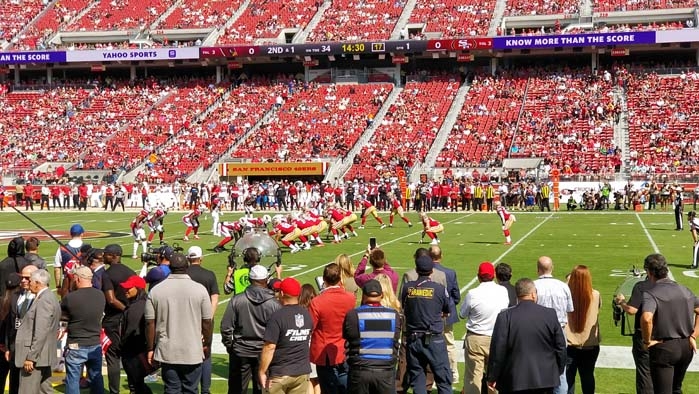 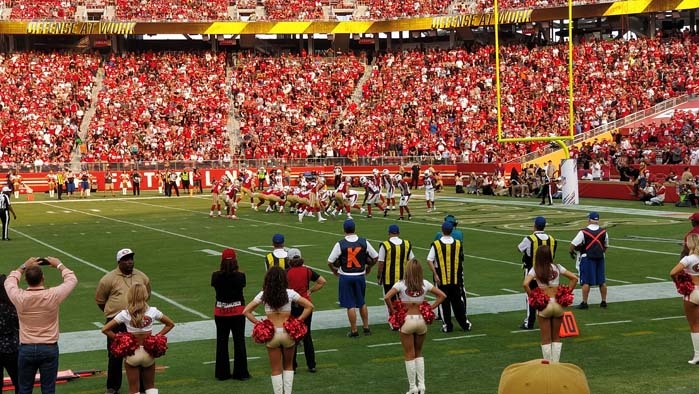 The game kicks off and despite a touchdown on their opening drive, the missed extra point sets the tone for the 49ers for the rest of the game. It’s yet another terrible performance by them. They eventually lose 28-18 to the Arizona Cardinals. The overall game is pretty abysmal as well. I might see them win at Levi’s one day… just not this year.

I also didn’t like the seat position being so close to the pitch. Yes, you get a close-up of the sideline but you lose a decent perspective of the pitch and game to my mind. I need to be higher up the stand to see how a play ‘plays out’. For me it’s too low for a good, top-down view. Definitely need to be higher up next year. 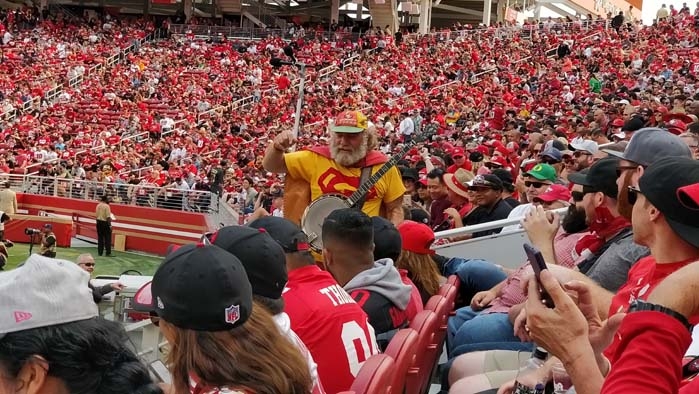 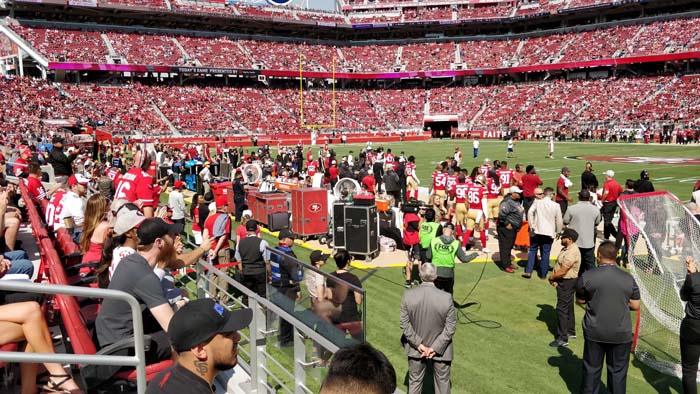 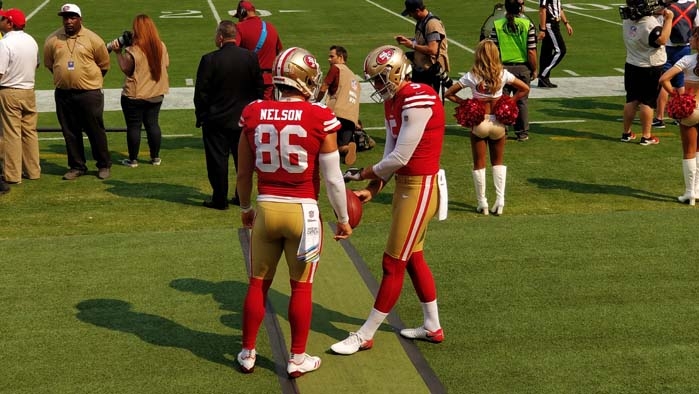 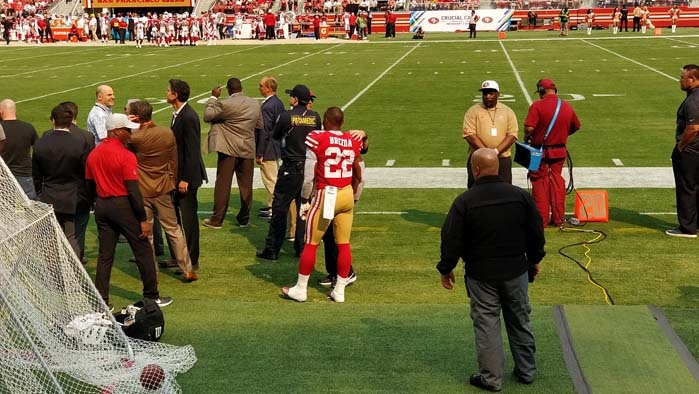 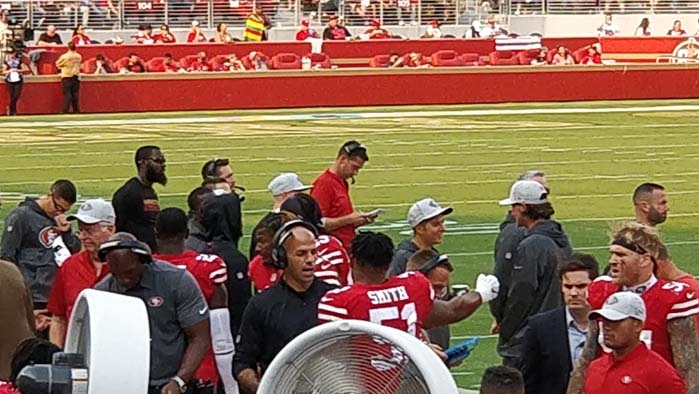 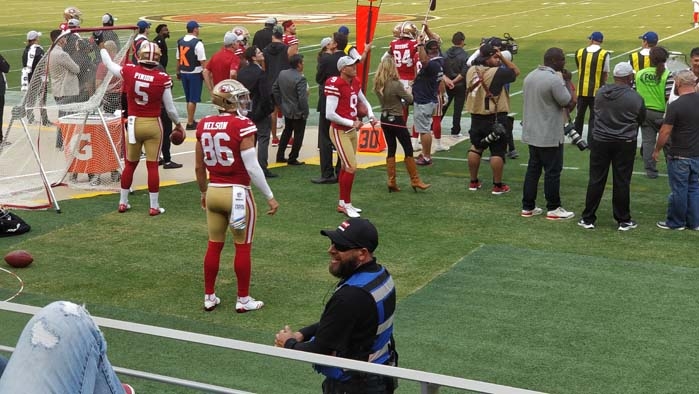 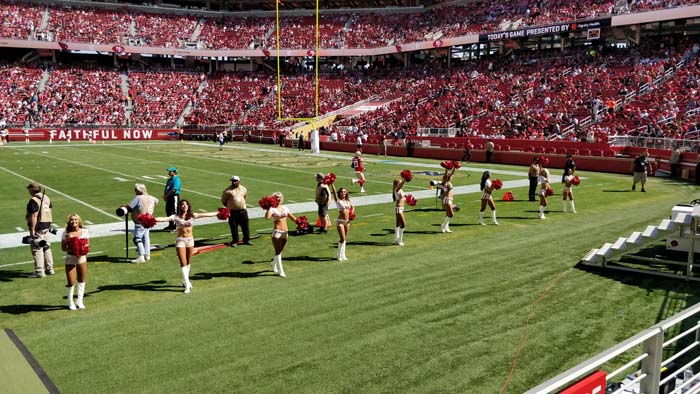 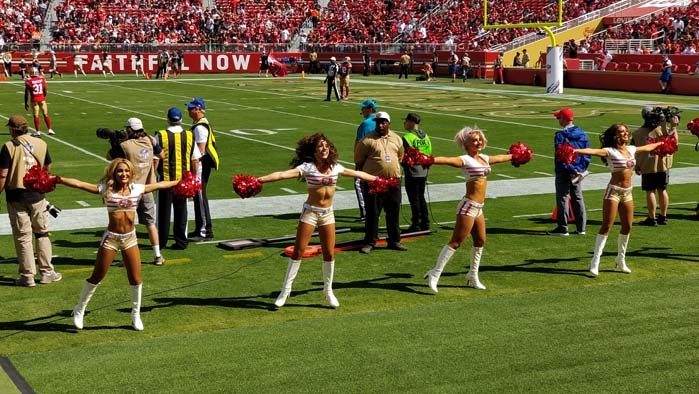 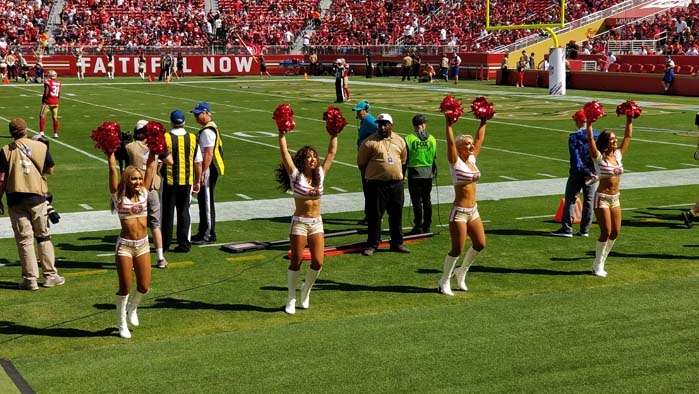 At the end of the game I visit the Team Store. As per previous visits nothing takes my fancy so my retro polo shirt will get at least one more year of service. Back to the VTA station and like previous years there are no queues, because I delayed my arrival back here. I just missed a Winchester train but within 5 minutes a Saint Teresa train arrives to take me back to the city.

I’m back at the hotel by 6 pm. I relax for an hour or so before walking up South 1st St to Rookies Sports Lodge. It’s very busy inside and a good atmosphere as the Dodgers vs Braves baseball and Cowboys vs Texans football games are on the numerous TVs. There’s lots of support in the bar for all of the teams, creating the atmosphere.

The games conclude and lots of people leave. There’s no bar chat at all this year here, even from the bar staff, I’m left on my own. I do some diary and eventually leave just before 10 pm. Back at the hotel I avail myself of my second complimentary beverage and head upstairs. I watch some sports round-ups on TV for a while, then it’s lights out. Time to go home tomorrow.