You are here: Home1 / Coast To Coast2 / Devils Tower

Off To See The Devil

Map of the Black Hills

Another cold and overcast start to the day. Breakfast is good and fills me up and it wasn’t too expensive. After check-out, there’s more messing about with Auto and Maps in the car before I finally drive away at 10.15 am. I think I’ve finally got the phone to show me the route I want. We’ll see.

I take Hwy 44 out of Rapid City and into the Black Hills. Despite the gloomy weather it’s an enjoyable drive, with great scenery. The road is good as well and I’m doing 60-65 mph most of the time. A right turn onto US-385 N takes me to the neighbouring towns of Deadwood and Lead. A left turn onto US-85 S and once out of Lead, I’m driving along a valley floor with the hills towering high above me. The road is lined with sheer rock faces where the route was blasted through the valley (I guess). It’s been a really good start to the day. 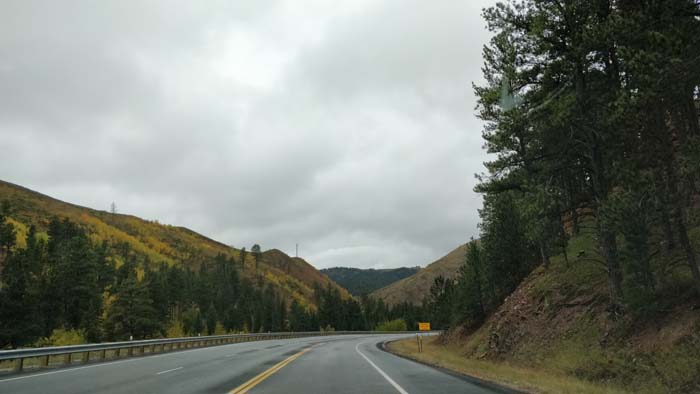 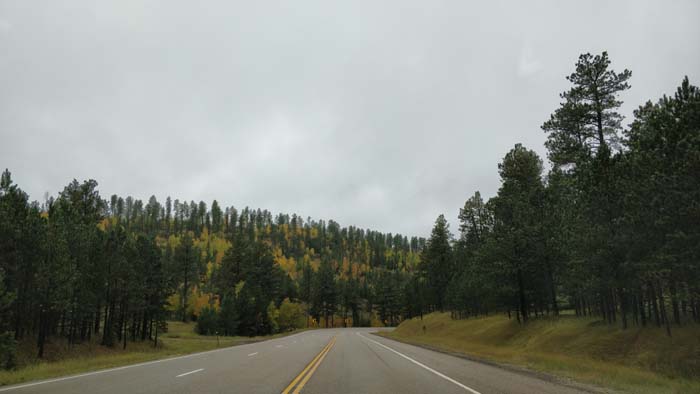 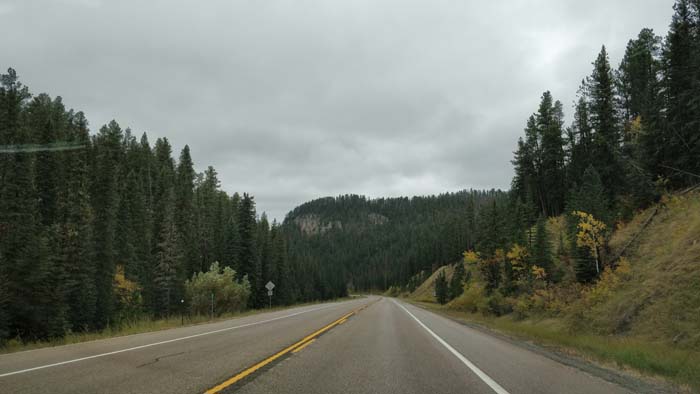 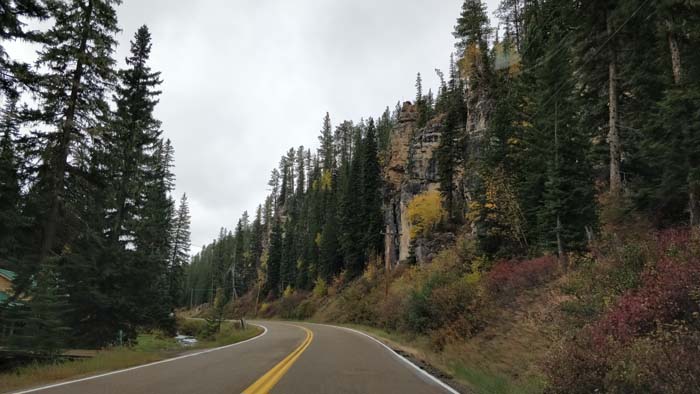 As the hills subside, the clouds thicken. I cross into Wyoming then turn right onto WY-585 N at Four Corners. It starts to rain. It’s heavy and the cloud is very, very low, creating a misty fog-like haze. The landscape here is not flat, with few crops to be seen. It seems to be mostly cattle territory here.

A short blast on I-90 W for one exit, of about a mile, then a right turn onto US-14 W. A few miles later as I crest the brow of a hill, I see Devils Tower in the distance, dominating the landscape. It will grow larger and larger as I approach.

I had not investigated what was around the base of Devils Tower but I discover on arrival it was America’s 1st National Monument, designated in 1906. The monument is managed by the National Parks Service, so there’s a $10 fee to get in. There’s a Visitor Center up ahead near the monument’s base. Having come this far, I may as well pay the fee to get up close, I reason with myself.

Rising over 1200 feet high, it’s very impressive up close at the base. I hadn’t figured on staying long either but find there’s a 1.3 mile trail around the base. Again, I decide it would be daft not to do the walk having now paid to get in the Park. And I’m glad I did it. It took me about 35 minutes but you get to see Devils Tower from all different angles and ‘faces’. It’s fascinating how the view changes as you circumnavigate it. 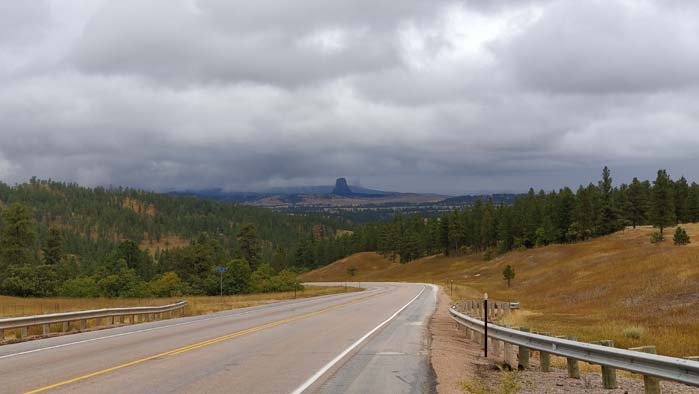 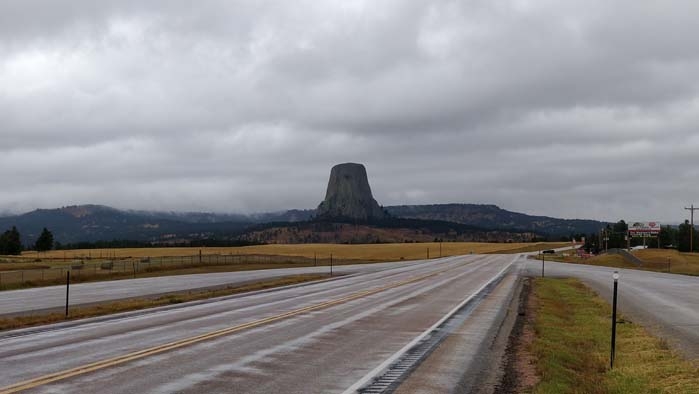 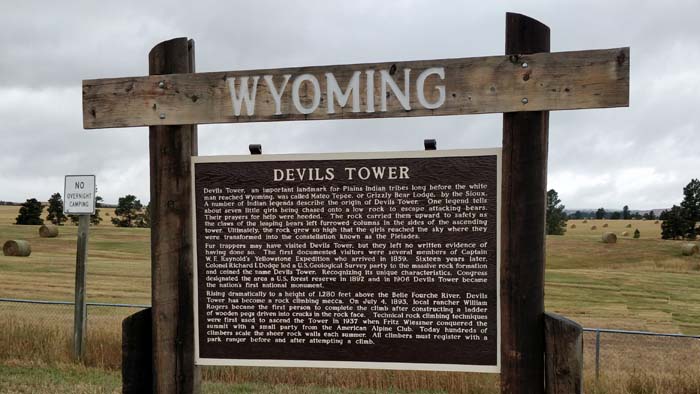 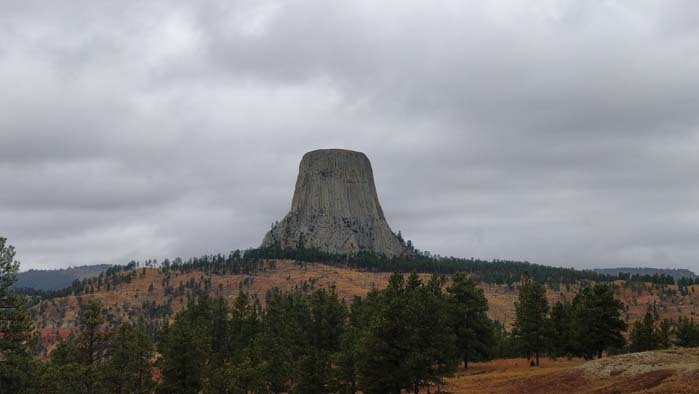 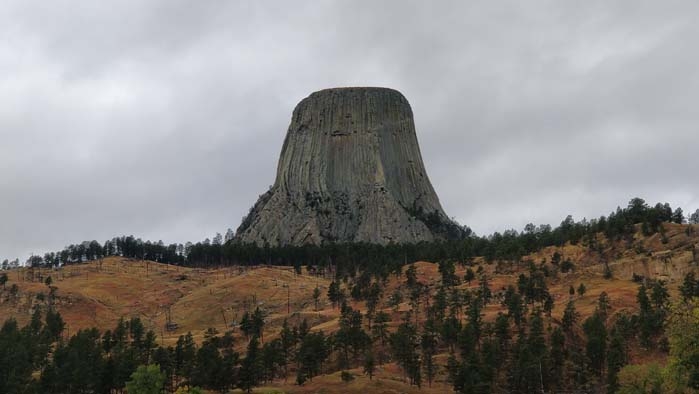 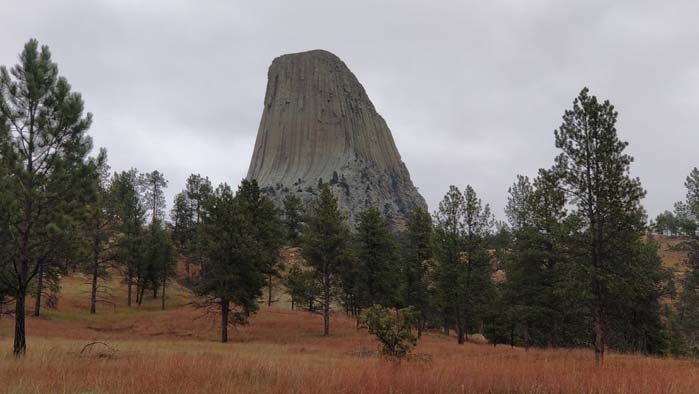 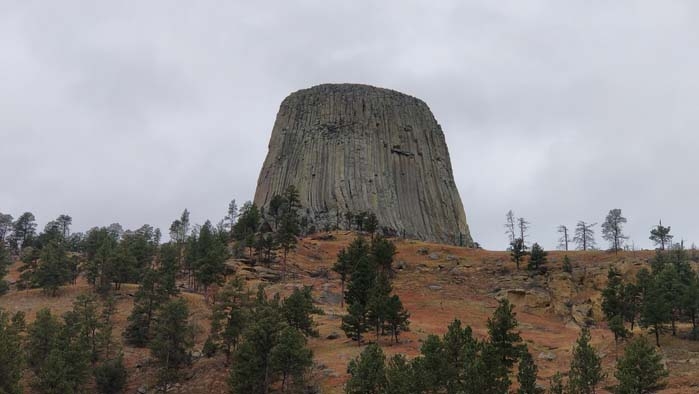 I know this place from the movie Close Encounters of the Third Kind, which as a fan of cinema is why I mainly wanted to visit. From the displays in the Visitor Centre I learn the area, and ‘butte’ to give Devils Tower its technical name, is sacred to Native Americans. They were driven away from the lands when Western settlers arrived but thankfully today their cultural and spiritual connections to the site have been re-established. It really is an awesome sight and well worth a detour and visit to go and see it up close. 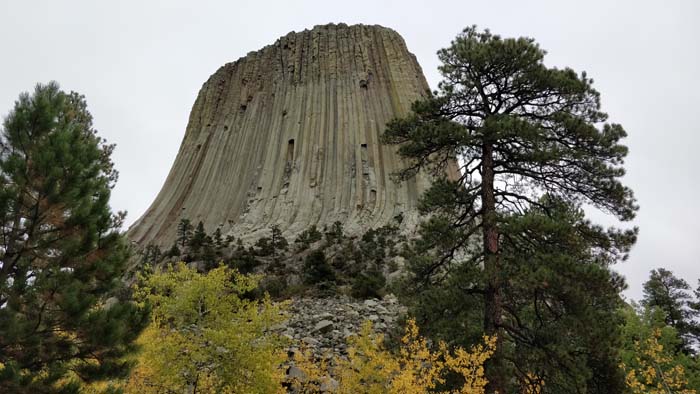 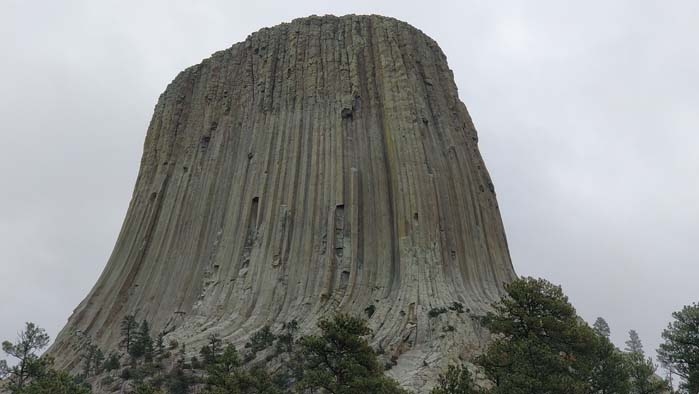 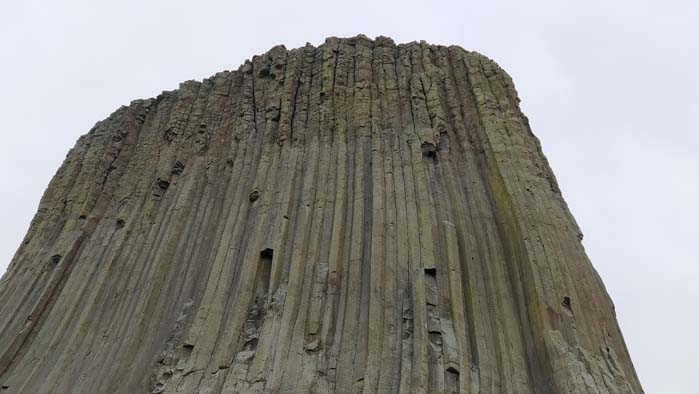 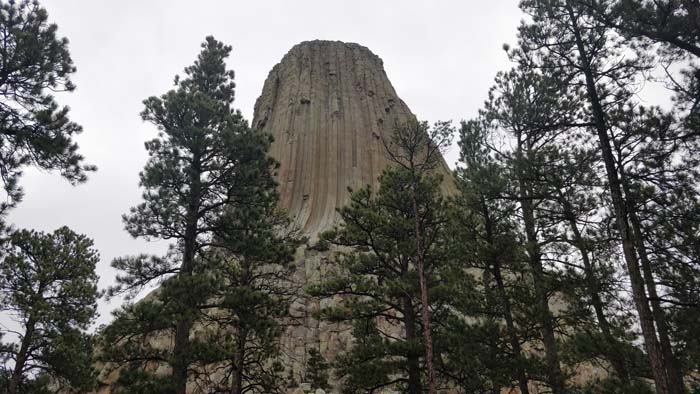 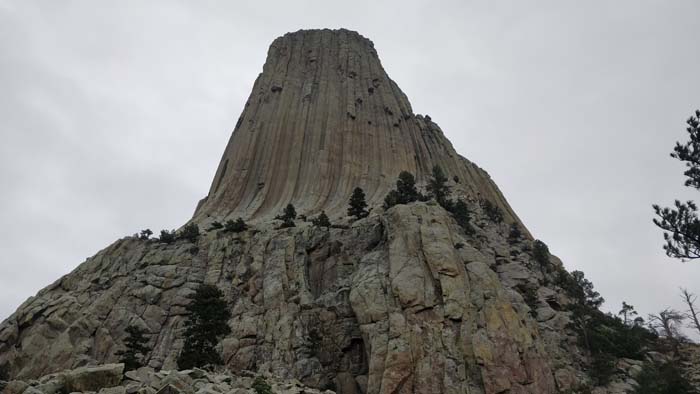 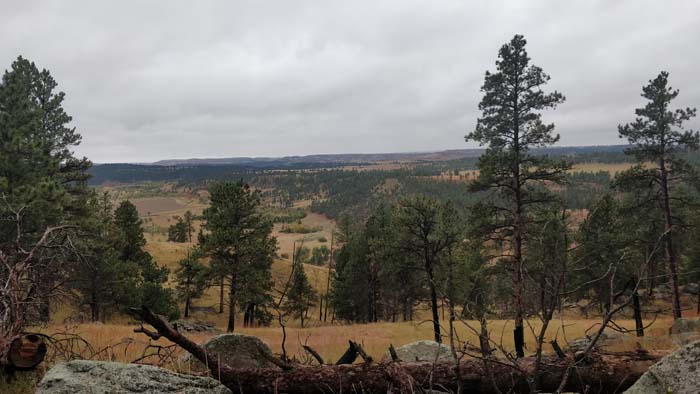 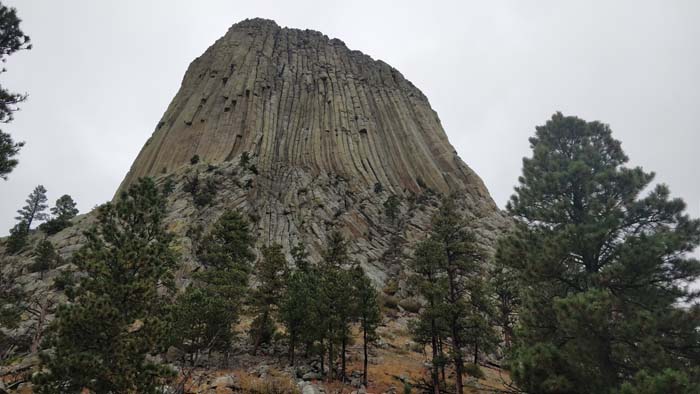 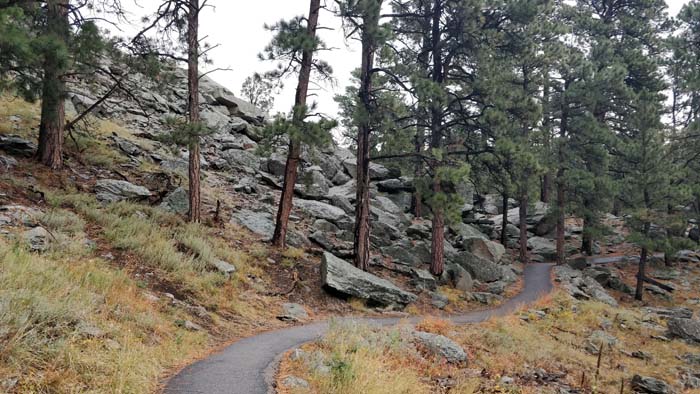 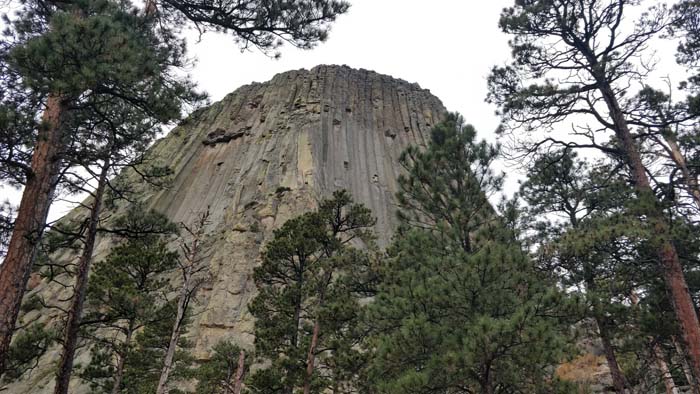 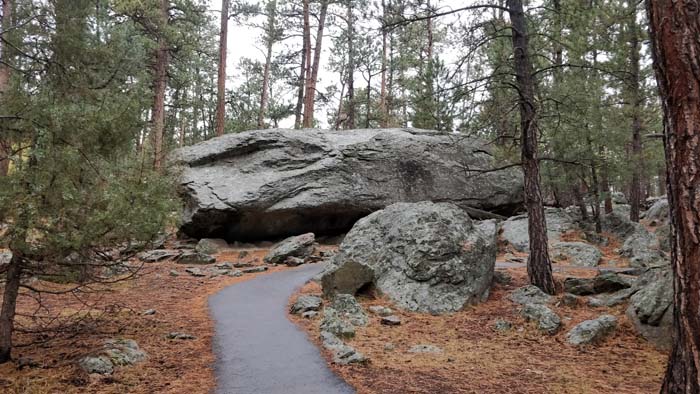 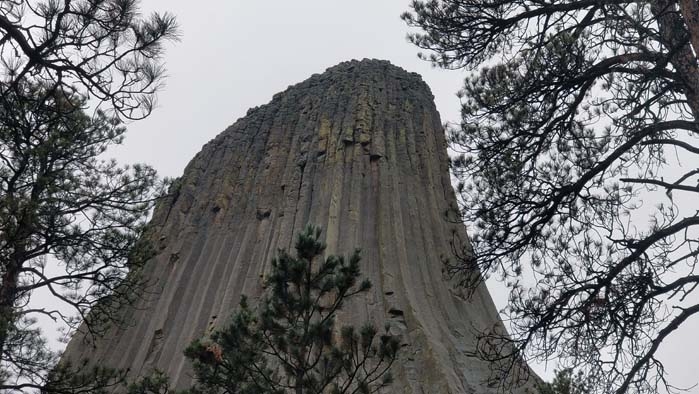 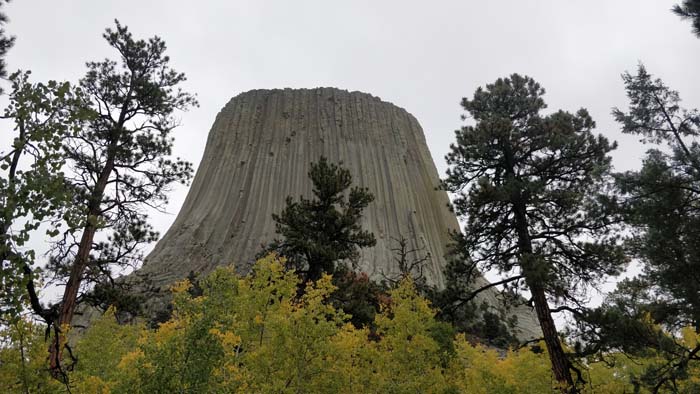 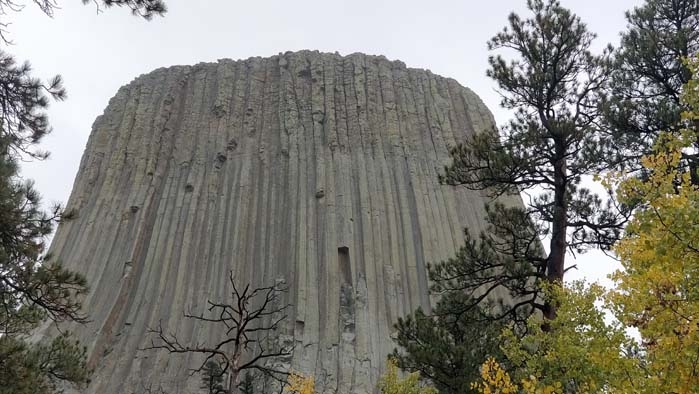 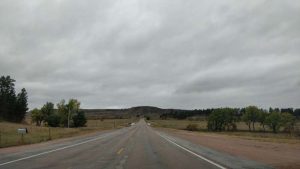 US-14 W near Carlile

I depart about 2.15 pm, getting back on US-14 W and then I-90 W, all the way to Sheridan. Same old, same old I-90 sadly. Still little traffic, still an 80 mph speed limit. I go up and down some hills where the cloud cover is so low it’s skimming the hill tops. I pass by a large city called Gillette that had lots of industry by the roadside. Out in the country, and over the hill crests mostly, there’s a lot of road kill, small deer mostly. A few cows graze in some fields here and there.

Another town, Buffalo, comes into view, smaller than Gillette, but there’s little else to see on the drive. Another endurance drive then. Sheridan comes into view and it’s a big place, for these parts, covering quite a bit of territory. The hotel, the Best Western Sheridan Center, is only a couple of miles off I-90. I fill up with gas on the way there, and then cruise Main St to see if I’d missed any bars in pre-trip research. Truth is, there weren’t any that I found then, and I find none now. Or rather any that were not clearly shit-holes. So I had decided to stay in the hotel tonight, and I knew the bar had lots of TV to watch SNF on.

I had however assumed I could eat there. And I can’t. They don’t serve dinner, just breakfast, the receptionist advises me on arrival at 4.40 pm. Oh dear. I ask her for eating recommendations, preferably that I can walk to. She mentions two, next door to each other, just a couple of blocks down. This was quite lucky as Sheridan seems a bit of culinary wasteland. Later, I lazily drive to check them out, just in case they are not walkable. They are, but both close early as it’s Sunday. Back at the hotel I look up their menus online and decide on Powder River Pizza and Pub.

I leave at 7.30 pm as they close at 9. There are maybe 8-10 people inside, scattered around the place. The barman is very friendly and helpful. He’s also black, a fact I mention only for the fact that since leaving Chicago 6 days ago I haven’t, to my recall, seen many African-Americans since. Anywhere. Go figure. In fact, the only other one was the guy who shouted at me to stop staring the guy being arrested in Rapid City.

There’s some local Sheridan-brewed draft beer on offer from the Luminous Brewhouse, and the IPA is very good. I order a personal 8” pizza, which the barman says is very filling, and should be enough. It was. The Wyoming Cowpoke pizza was excellent, as were the two dough sticks with it. The barman comes over to my table and says it’s last orders. It’s 8 pm! I say the door sign says they close at 9. He responds with the fact that the boss changed it last week because there’s usually no-one in after 8 pm… he also tells me that many bars in Sheridan routinely close at 9 pm! However there are still about 8 folks in now, plus me.

He comes back a few minutes later to say they’ll stay open until 8.30 tonight. So I order another beer to finish off washing down my pizza, and watch SNF on TV. It was a good meal in a nice, if quiet, bar. I bid farewell to the barman and head back to the hotel.

There are half a dozen guys around the bar. The receptionist told me earlier that the bar would close when the football finished, irrespective of an advertised closing time of 10 pm. This barman however is busy on his phone and completely ignores me when I sit at the bar. He gets off his phone and still ignores me, even walking right in front of me to leave the bar and walk up to a couple of old guys at a table to replenish their drinks. On his return he finally acknowledges me and says he’ll be with me soon. Not impressed. Why are some bar people just dick-heads? Probably because they can be.

I have a couple of beers whilst the game finishes. Only towards the end of the match does the barman chat a bit about the game, but nothing substantial. Game over, I return to my room and dig out my diary whilst grazing the last night sports round-ups on TV before lights out.

I haven’t quite seen the last of I-90 yet but today’s afternoon stint was my last major Interstate driving until I near San Jose in just under a week. I shall not miss it. But the start of the day in the Black Hills was a great drive, Devils Tower was amazing, and the pizza bar was short but ‘sweet’, so overall it’s been a very good day.