You are here: Home1 / Coast To Coast2 / Gettysburg

I need to be on the road in good time so that I have enough time – how long I will need I don’t know – at Gettysburg. So the plan is to be driving away by 10 am. Breakfast in the hotel is OK. No fruit but the cereals and pastries were acceptable. The hotel was good, room was nice, good space and décor. The complete lack of parking was the only issue but then it is at quite a few city centre hotels.

I walk to parking garage and they take ages to get my car, very inefficient they were. By the time I get back to the hotel to pick up my luggage and drive away, the time has just gone 10 am. Not too bad I suppose.

The drive to Gettysburg was unremarkable. Weather overcast, which makes any drive worse than it could be in sunshine. At the start the road went parallel to the Schuylkill River, which was nice. But after leaving that, a few miles out of Philadelphia, the route was non-descript. I arrive at Gettysburg just before 1 pm, a little later than planned. The Maps route in the morning came up 30 minutes longer than when I planned it at home, not sure why. 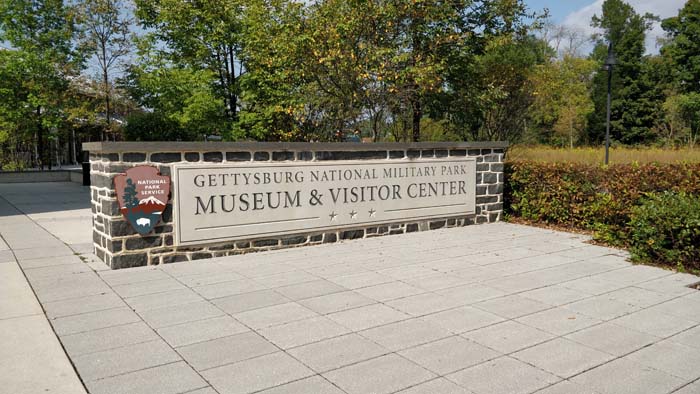 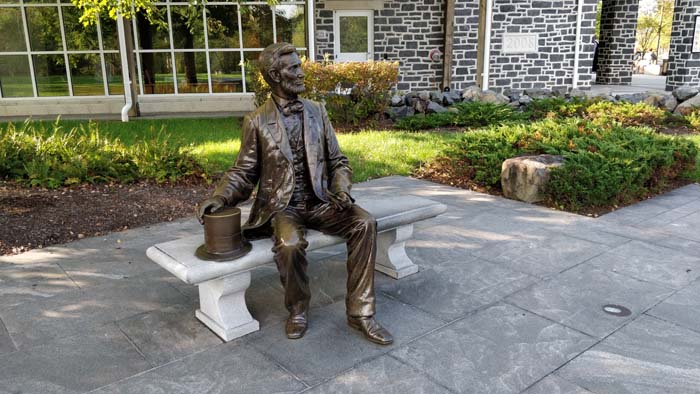 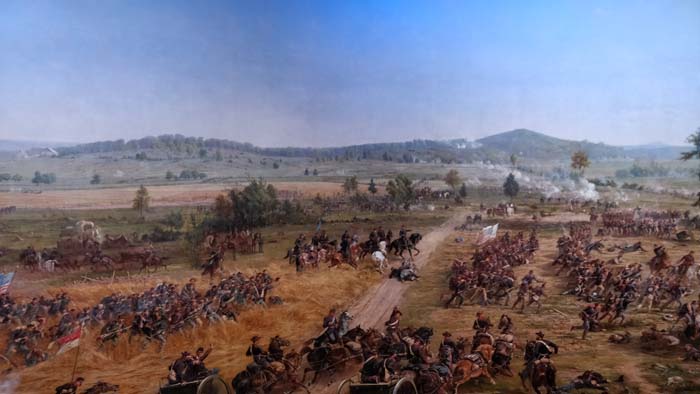 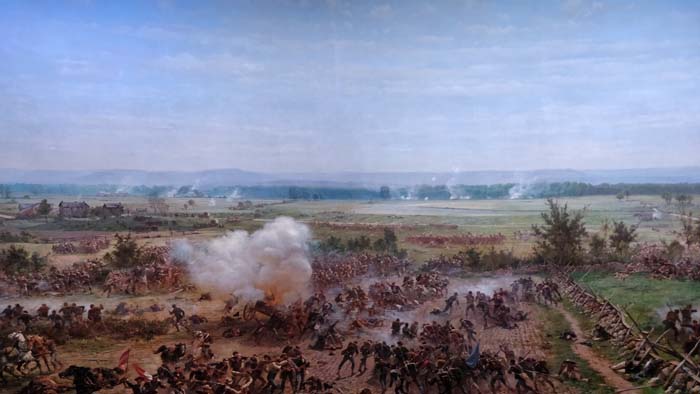 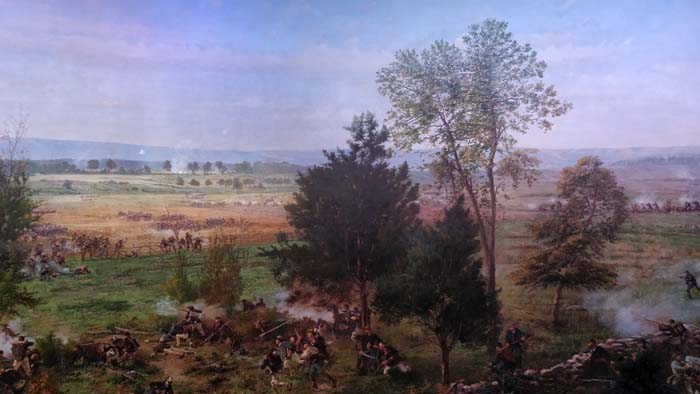 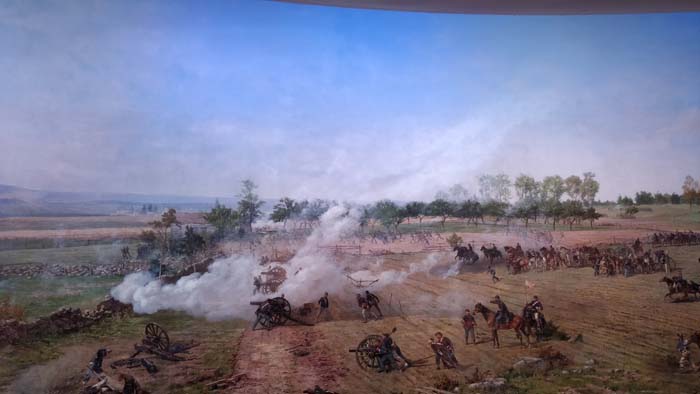 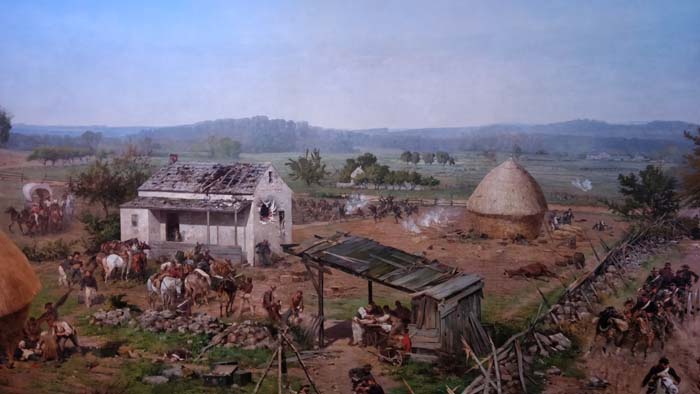 So why Gettysburg? I wanted to visit Philadelphia then Niagara Falls and the distance between them is too far for one day. Hence I needed an overnight stop, so looked for something on the way of potential interest. I’d heard of Gettysburg but knew nothing about it. So I thought I’d find out.

I start the ‘exhibit’ with a short film that very helpfully tells me precisely that. After that there is the Cyclorama, an astonishing 360º painting, 42 ft by 377 ft, displayed in a circle. It depicts the climactic Confederate attack on Union forces on July 3 1863. It’s quite amazing. Then into the Museum for lots of exhibits that tell the story of the Battle of Gettysburg. I get half way round before leaving, as I have booked a Battlefield Bus Tour starting at 2.30 pm. This 2 hour excursion is a narrated guided tour of the significant sites and encounters between the opposing forces over the 3 days of the Battle. And very good it is, well worth doing. Lots of detail that help flesh out the story of the Battle. The guide was always helpful in answering the groups’ questions. 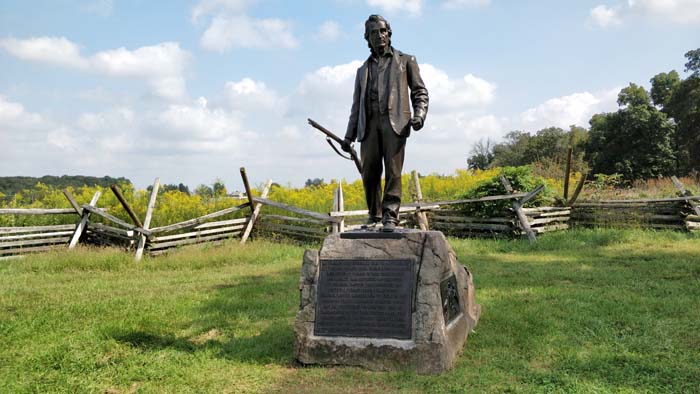 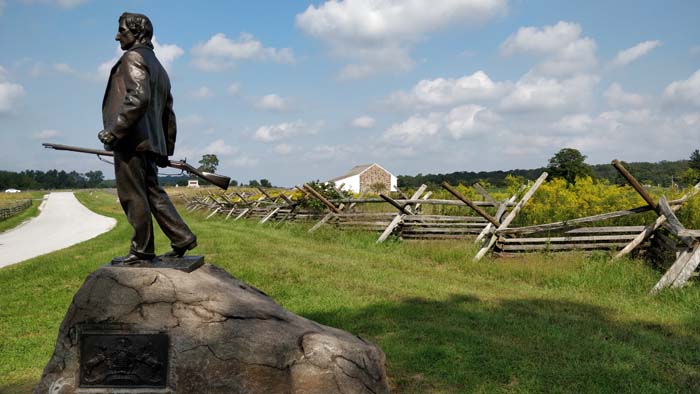 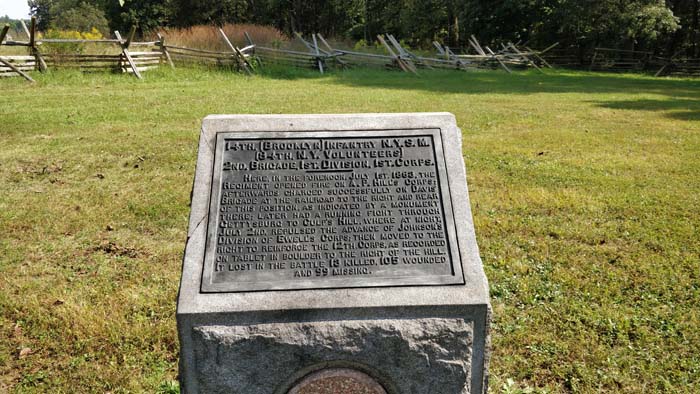 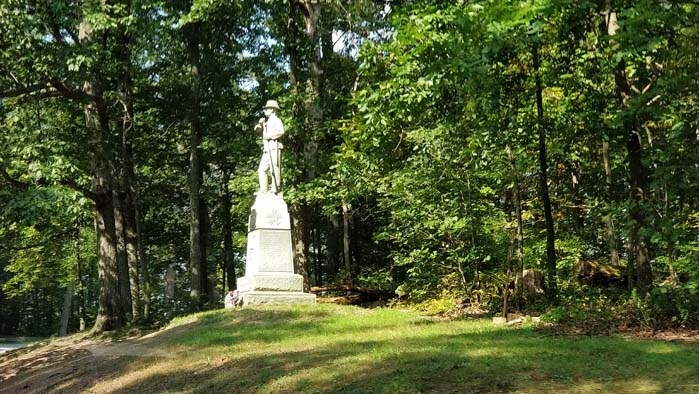 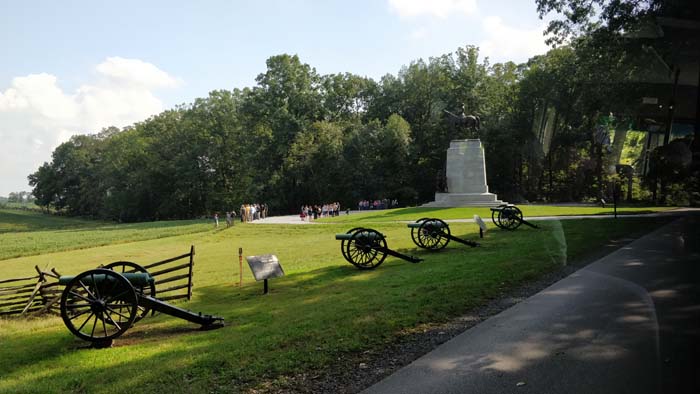 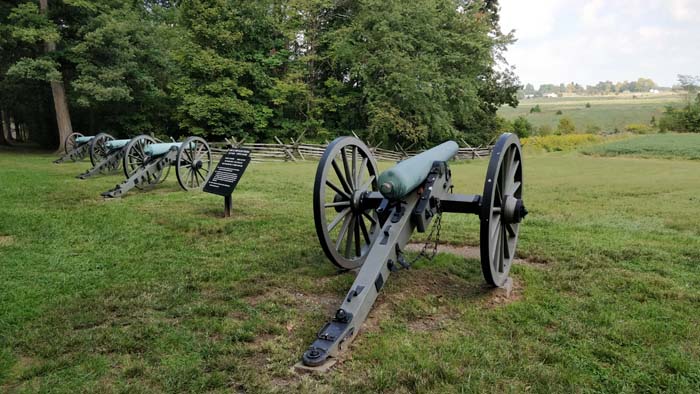 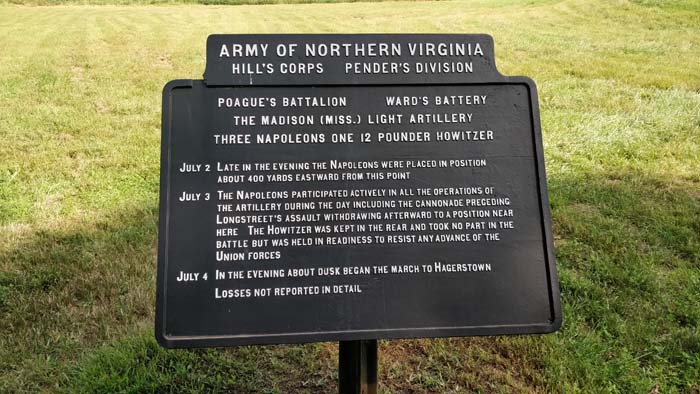 Back at the Museum, I resume then finish my tour in there. Again, it was very good at telling the story, from both sides, and helping newbies like me to understand. I’d asked the guide earlier about a view I’d read that Gettysburg was the War’s turning point and he said it wasn’t. His view was that the Confederate cause was probably already lost by then. The War indeed dragged on for another 2 more years. He thought Gettysburg’s significance was more “emotional” in terms of dealing a huge blow to the already low morale of Confederate troops. In a way I suppose, the straw that, eventually, broke the camel’s back. 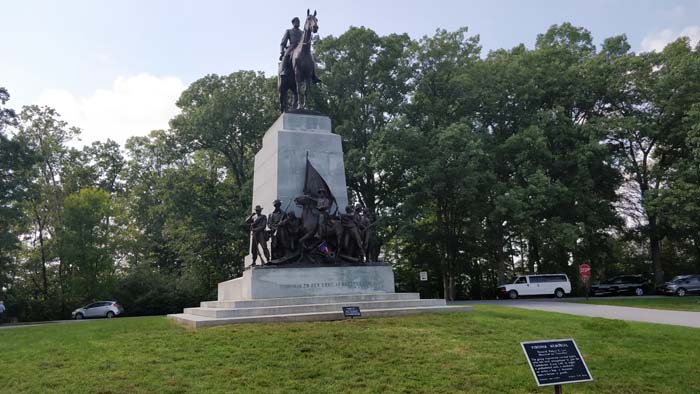 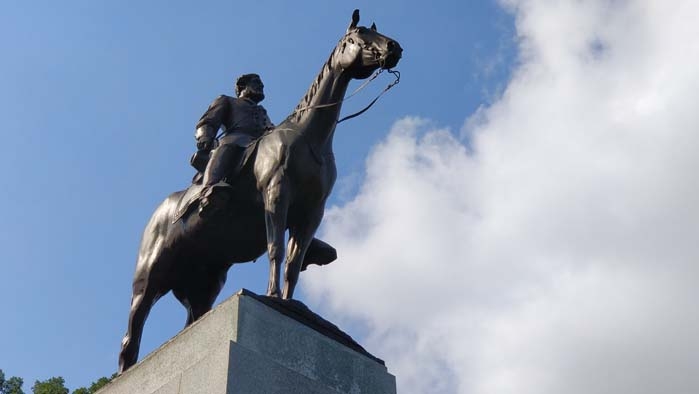 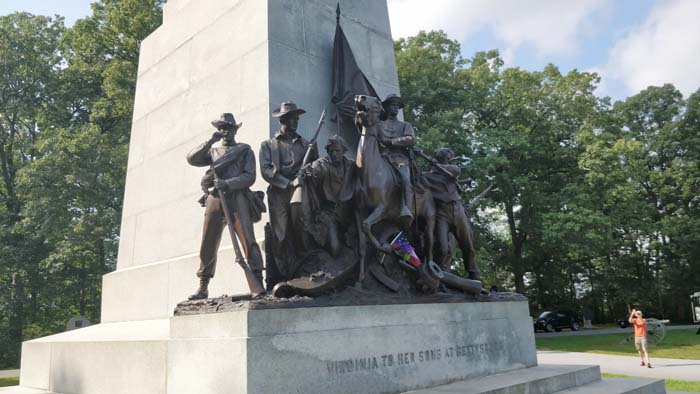 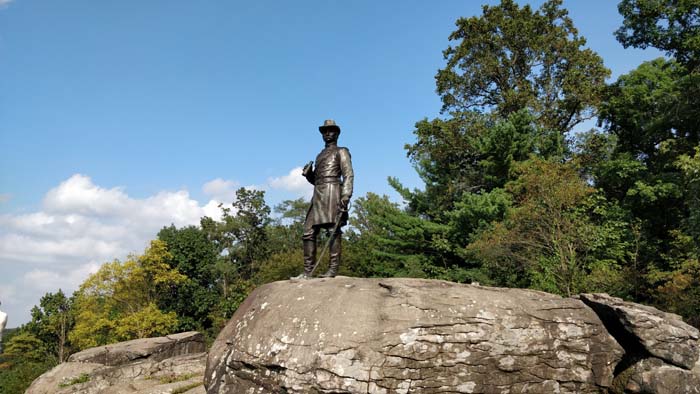 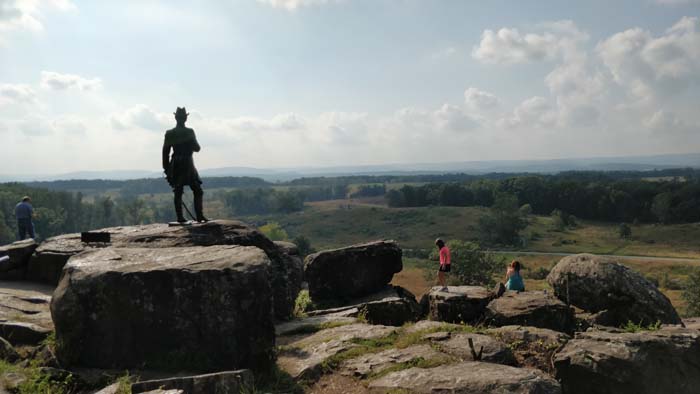 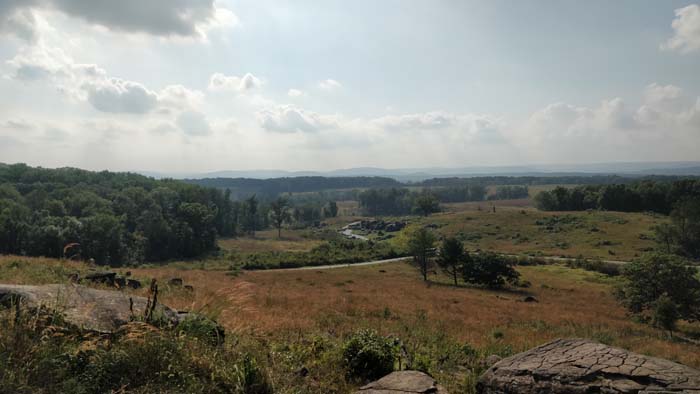 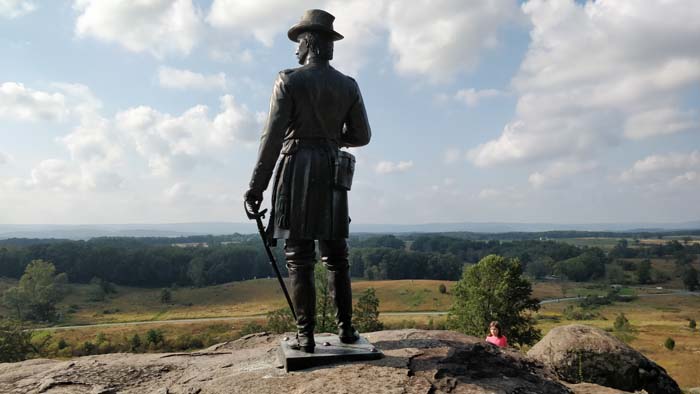 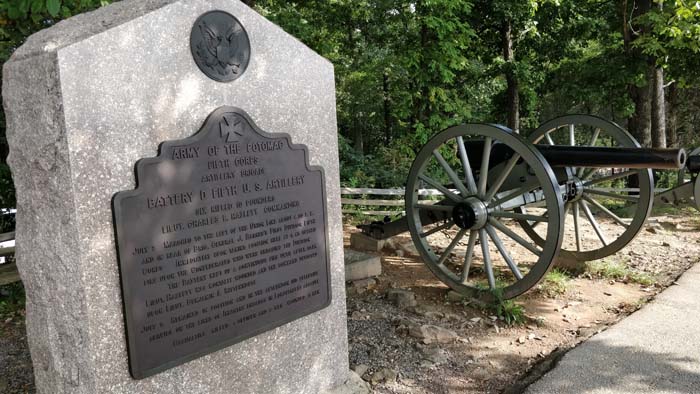 I’m glad I visited though, I learned a lot and it’s all very well done. On the road again by 5 pm, heading north-east for Harrisburg. Again the drive is pleasant but with nothing of interest to see really. I arrive at the Sleep Inn & Suites Harrisburg – Hershey North at 6.30 pm, having filled up with gas further up the road. Something I’ll be doing a lot of on this trip given the mileage to be covered. I have to ensure that I’ve got enough gas every day to cover the next day as I’ll be out in the wilds in places. So I resolved to fill up every night however late I am, unless the next day is a layover or known short drive. But there aren’t many of the latter…

The Sleep Inn is a typical chain motel. Large room, clean, modern and spacious, and a reasonable price. I’m way out of town as all the downtown hotels had terrible reviews – and I mean bad – apart from one, and that was really expensive. And just up the road is Ted’s Bar and Grill, which had good reviews for food and drink. The key was then finding a back route on residential streets so I could walk there – without risking my life on the highway. I’d used StreetView to see that there were no sidewalks on the main road that Ted’s was situated on…

After my usual ‘housekeeping’ for tomorrow, I’m ready to leave just before 8 pm. My walking route works fine and I’m seated at the bar by 8.10 pm. It’s very busy inside, quite amazing considering it’s out-of-the-way location. Whilst it’s on US-22 E, there’s little housing around that I saw –  the parking lot was near full but then Americans never walk anywhere. A fact reinforced later when the guys I end up talking to express absolute disbelief when I tell them I walked here from the Sleep Inn.

The evening starts slowly though in terms of chat, nothing happening whilst I’m ordering beer and food. Ted’s claims to have the “best wings in town” so ordered the boneless variety with Mesquite BBQ Sauce. They were awful. They obviously strip the chicken meat from wings then reconstruct it as long wing-shaped ‘nuggets’ and cover them in some hard, crunchy coating. This must dry out the chicken meat in the process. I’d never had boneless chicken wings before. And I never again will again.

A while later I noticed this guy kept getting up out of his seat to give it to a lady who kept coming and going to talk to him for whatever reason. There was a spare seat to my right, so I tapped him on the shoulder and said I’d move down one. Would he like that? “Thank you,” he replied. So I did, he sat in my old seat and he introduced himself: “Hi, I’m John, one of the owners.”

At which point the guy now on my immediate right starts chatting, as well as John. Over the next couple of hours we have some great banter, also including John’s son serving behind the bar. Good chat, good evening. John even offers to drive me back to the hotel when he leaves for the night, but I figured that might be quite late. Plus when he hears my road trip plans, and that I’m on my own, he offers the view that “You hear to get some pussy then?” So despite the good chat, I figure he’s maybe not the sort of guy I’d really want to associate with. Along with being offered some cocaine whilst walking in New York and Mikey offering me some pot, it’s been an interesting start to the trip.

I never did find out the name of the guy on my right, but we got on well. Or so I thought. When I went to the restroom later on, upon my return, he’d just upped and left without so much as a goodbye!

I decide to leave myself and John again offers me a lift, which I politely decline. He wants re-assurance that I am definitely walking the back route and not on the freeway, which I give him, and I’m on my way.

Safely negotiated in the dark, I arrive back at the hotel and to bed, ready for a long drive tomorrow. A good day today: a couple of OK drives, some culture and knowledge, plus a reasonable bar and company. More of the same please.