You are here: Home1 / Coast To Coast2 / Thru’ Grand Teton To Salt Lake City

Given the crap evening yesterday I didn’t comment on the day’s events. The weather was generally overcast throughout the day, with only moments of sunny intervals. These were very fleeting. So this wasn’t great. The scenery though is spectacular throughout and the roads were all great to drive on, varying as I made my way along the Grand Loop Road.

I didn’t see as much wildlife close-up  as I thought I might, although having a bison amble past close to the car probably makes up for that! I did the Grand Loop in a day and saw most of what I wanted. Frankly, there’s probably only so many geysers you can see before getting bored, and I did see the major complexes at Norris Geyser Basin and Midway Geyser Pool. I don’t believe I missed out on anything but it was a rush in a day, as I’d read prior.

You definitely need to keep an eye on the clock if you attempt it in a day. I could of course have started earlier. I entered the Park at 10.10 am and my actual Loop trip took me about 8 hours, removing the hour from the North East entrance to Tower Junction. Most estimates I read said between 5 to 7 hours for the Loop, and it was traffic that made it so variable. I now assume those timings exclude stops. I guess in Summer the roads are very busy but traffic was light during my visit.

All in all, despite the lodgings issues, Yellowstone is a great place. Definitely a bucket list item, now ticked off.

For today though, something went wrong with my Maps route planning. It was always going to be a long drive to Salt Lake City both in terms of miles and time. However when checking it last night there was an extra 60 miles and 1½ hours added on! I think I know what I did wrong but won’t be able to verify until I get back home.

And I can’t do anything about the extra time now. I just need to get to Salt Lake City so I decide on an early start and am driving off at 9.15 am. There’s only light traffic and no animals in the road but it’s still difficult to average more than 45 mph over any distance due to the nature of the roads. I exit Yellowstone by the South entrance and a few miles later I enter Grand Teton National Park. The roads are better here and the scenery is just as spectacular. In places, it’s even better than Yellowstone. It’s a really great drive. However I can’t stop as much as I would like to in order to take photos because of the distance I have to drive today. 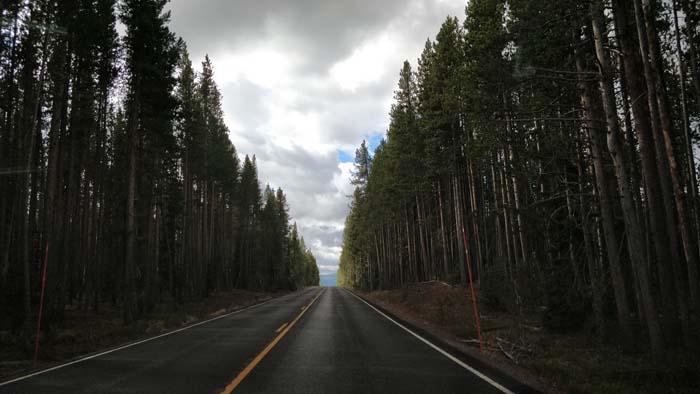 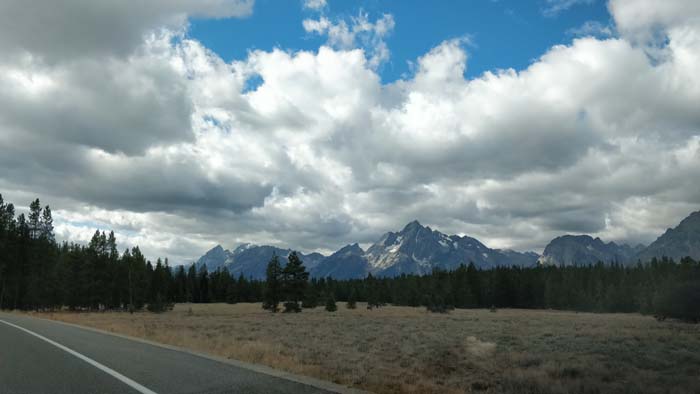 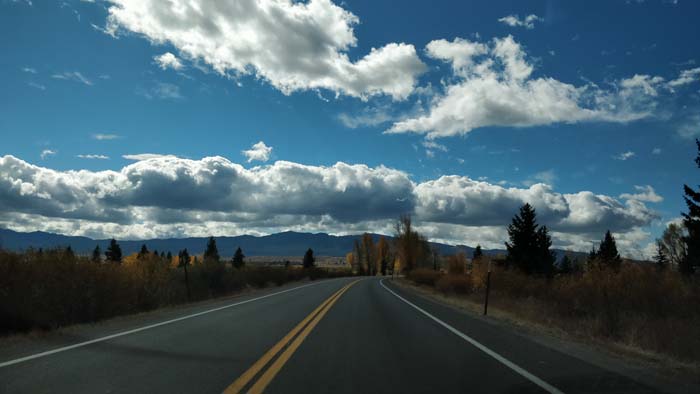 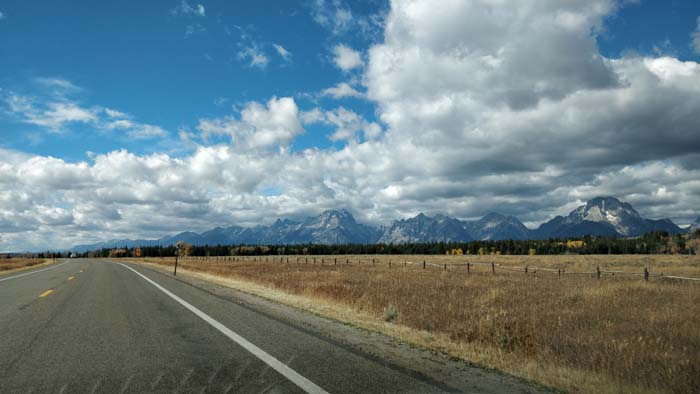 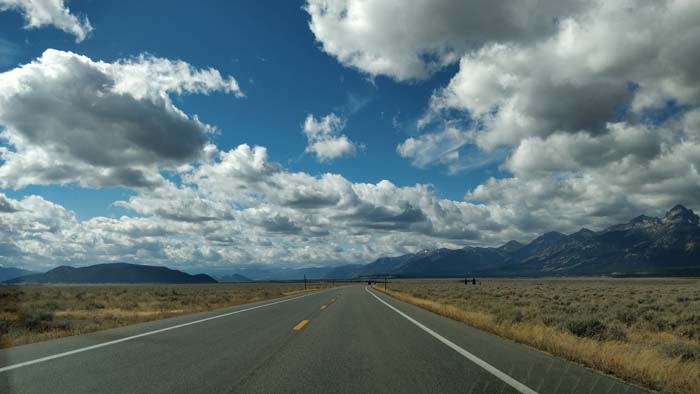 I do stop as planned at the Snake River Overlook where Ansel Adams took his iconic photo of Grand Teton in 1942. Clouds obscure the top of the peak but it’s a nice view. Moving on, I stop in Jackson at a gas station to buy lunch. Soon after leaving the city there’s a really nice valley to drive through on US-89 S. The landscape then flattens out and the valley widens, to be flanked by hills on either side. The road is fast though, speed limit of 65 mph, sometimes 70. Traffic is light and the weather – at last – is good. It’s brightened up today and there’s lots of blue sky but also white fluffy clouds. I pull over into a turn-out to eat lunch. As I travel south, the temperature is picking up a bit as well. 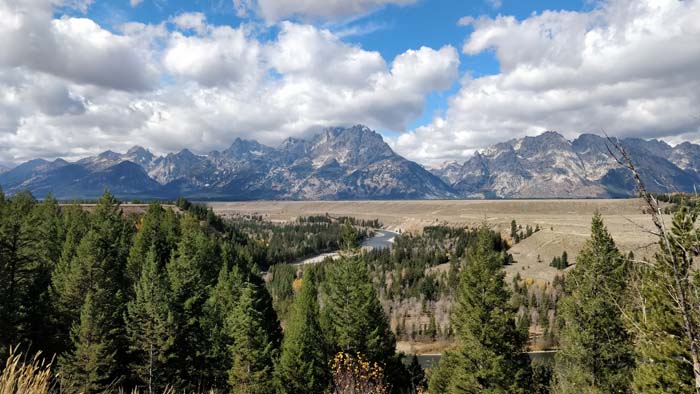 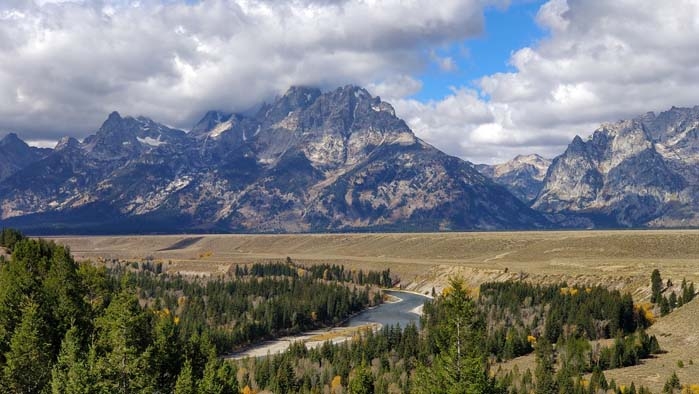 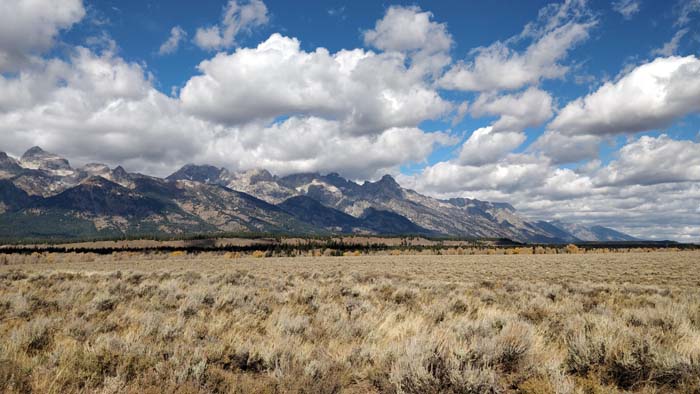 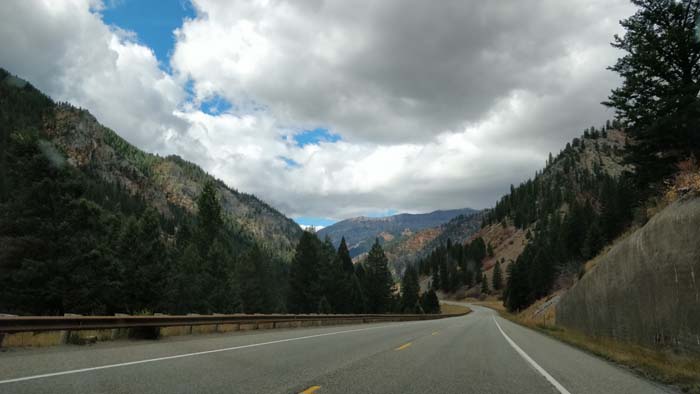 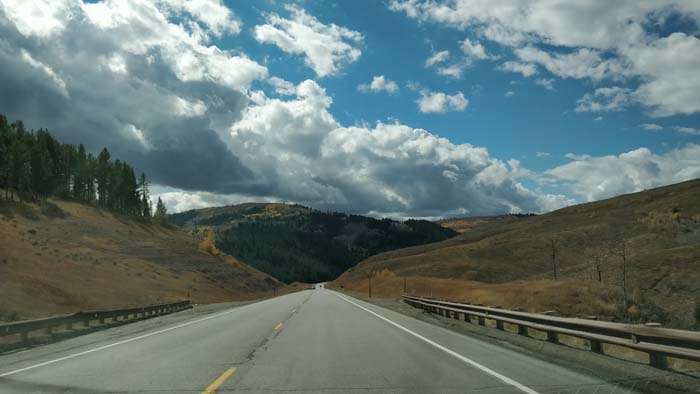 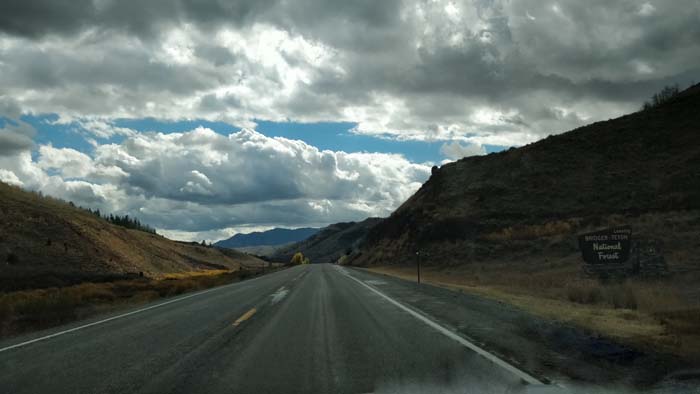 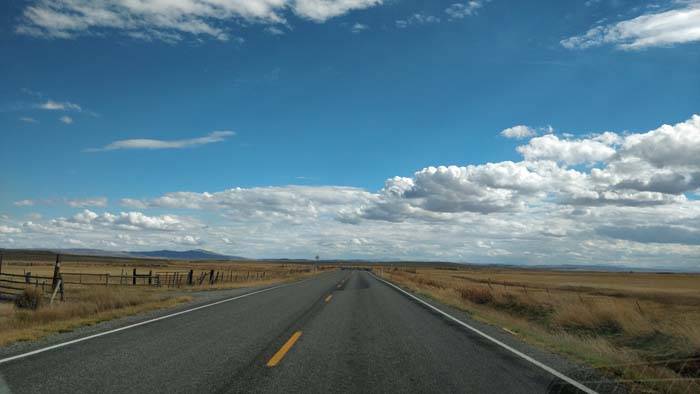 There are some hills to climb over in places and at one point I enter Idaho only to leave it a few miles later, going back into Wyoming. Later on I enter Utah, then back into Wyoming before finally staying in Utah just after Evanston when on I-80 W heading towards Salt Lake City. It’s a strange route but once out of the Bridger-Teton National Forest I just let Maps choose the quickest way.

The non-Interstate roads were generally good and the route took me through some towns, so I saw slices of Wyoming life. The scenery was obviously better than being on an Interstate for most of the way. I did enjoy it, just not the distance nor time it took.

By the time I arrive in downtown Salt Lake City at The Peery Hotel it’s 5.15 pm. So the journey took 8 hours to drive 390 miles…

The room at the Peery is a bit small. There’s a very large reception area and it’s an old hotel, built in 1910. After such a long drive I don’t feel tired, in fact I haven’t on any of the long days on the road. The Chevy Malibu is a comfortable and easy car to drive but it has terrible acceleration. Once at speed, say over 60, it cruises well and accelerates OK. But at low speeds when wanting to overtake slower traffic, the kick-down is practically non-existent. I have to judge overtaking very carefully.

Just across the street from the hotel is Squatters Pub Brewery. It has good reviews online and when I ask the receptionist, he rated it as well. It’s very busy though when I walk across at 8 pm. I get the last seat at the bar, squeezing in between an old guy and a younger one. They brew their own beer in here, so I try that and it’s good. I order nachos with shredded pork. Such appetizers are often huge, and the barman confirms this when I ask to place the order.

A bug plate piled high with food duly arrives. The older guy to my left then comments: “That’s huge. I’m from Texas where things are big, but I’ve never seen nachos that big!” And neither have I. They are good but I do not finish them all of course – in fact it looks like I’ve hardly touched the plate! But now I’m stuffed.

The younger guy to my right eats his meal and leaves without speaking. Texas man and his wife settle their check, and we chat for about 5 minutes until they too depart. He mentions they’re staying at the Peery: “Nice place but the room is tiny.” Quite.

A while later another mid-30s guy replaces the Texan. We exchange a couple of words, but not much. I instigate things a couple of times but he just lets it die. When some minutes later another guy his age sits to his left, he’s soon waxing lyrical about his life and the universe. Obviously he didn’t want to talk to an old man. Age-ism, I think. 🙁

However, maybe it wasn’t a bad thing. I got the impression from overhearing a few things – I could hardly avoid it as he was next to me – that the first guy was a bit full of himself: there was a lot of bragging going on. So it probably wouldn’t have been a good chat anyway. Hence I write my diary until I’ve had enough and then leave to walk the short distance back to the hotel. It’s started to rain lightly but I hardly get wet and am soon up in my room.

There’s no breakfast at the hotel, nor a fridge. I didn’t eat all the fruit salad I bought in Yellowstone and brought it with me. In Jackson I bought yoghurt and a banana, but forgot some juice, which I then picked up when getting gas in SLC before arriving at the hotel. So before dinner I raided the ice machine to keep everything cool. Hopefully all will be OK in the morning.

It was a good, even excellent, drive today through some very nice scenery. Just a bit long…

Another busy day lies ahead tomorrow.