I’m going to be out all day, for a long day, and won’t be back until well after midnight. Breakfast is included in the room rate and it’s a typical US hotel buffet. It’s good for what I need and perfectly acceptable. On the road again I drive around the Beltway to take the Grounds Tour at the Indianapolis Motor Speedway, the day’s first activity. As mentioned before I’m going to Detroit and Indianapolis was about halfway so I looked at what I could do here. I figured there’s not much that beats going to the Brickyard.

The tour bus takes us onto and around the track, stopping on the start line to look at the few remaining bricks of the famous ‘brickyard’ circuit. A couple ask me to take their photo on the start line and then insist on doing the same for me. The circuit is very impressive and holds about 260,000 on race days. That’s a lot of people. The tour guide is very good, giving out lots of facts and answering questions when asked. The tour also takes us inside the buildings by the start line. We get to see the winner’s press conference room, media centre, go onto the winner’s podium outside and into hospitality suites. Finally we drive past all the (locked) garages at the back. The whole place is huge, and very well organised and setup. 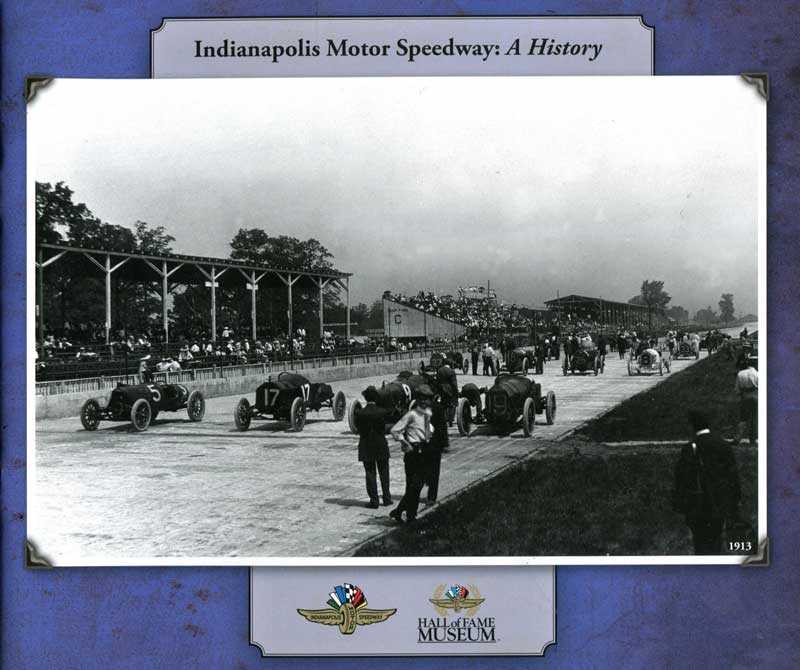 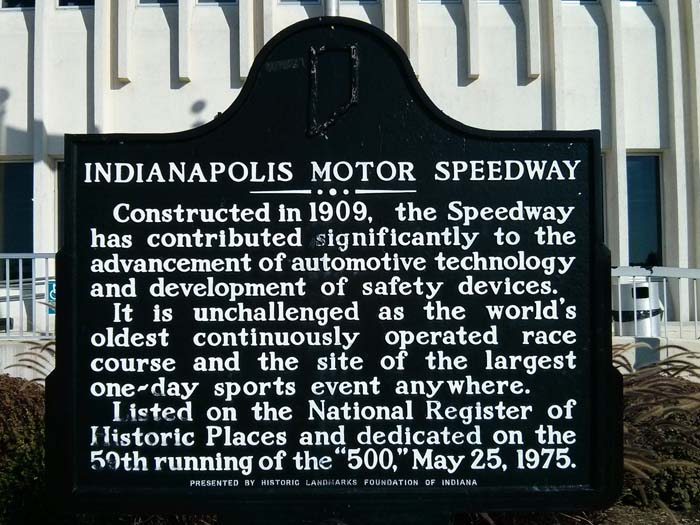 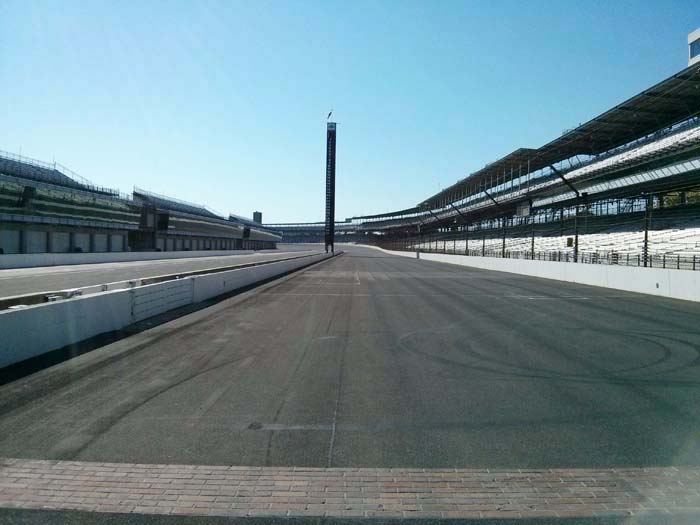 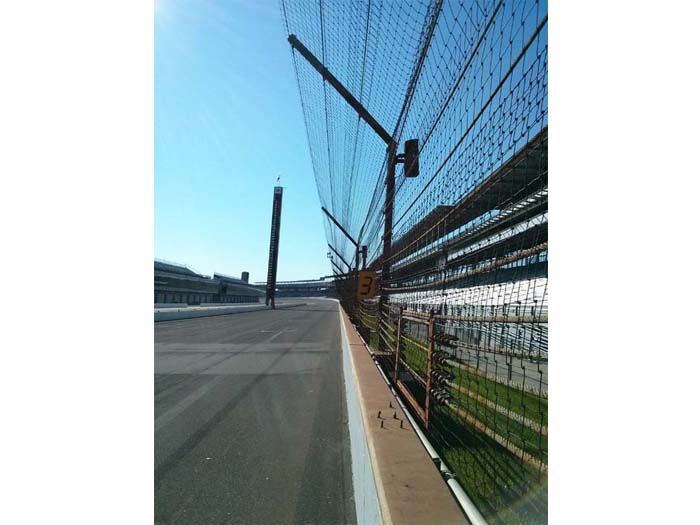 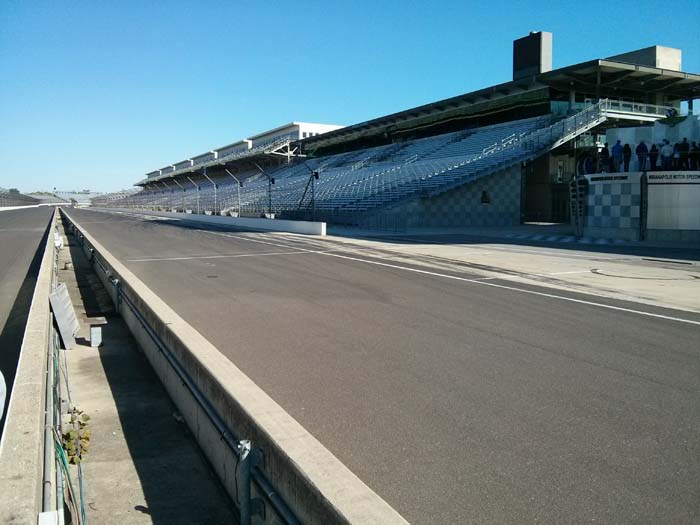 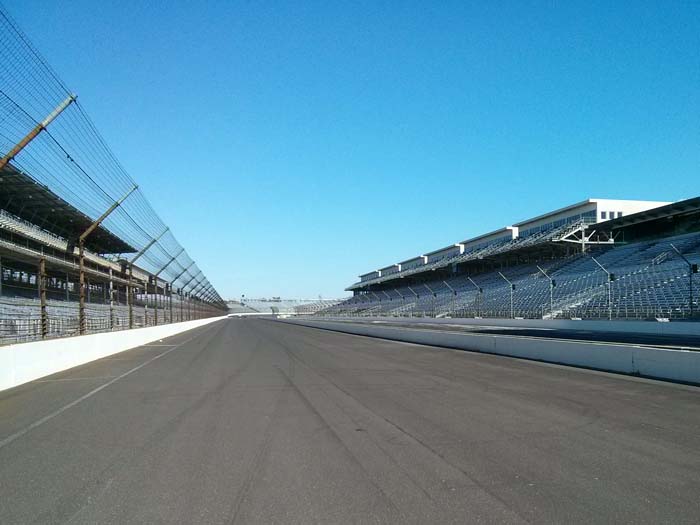 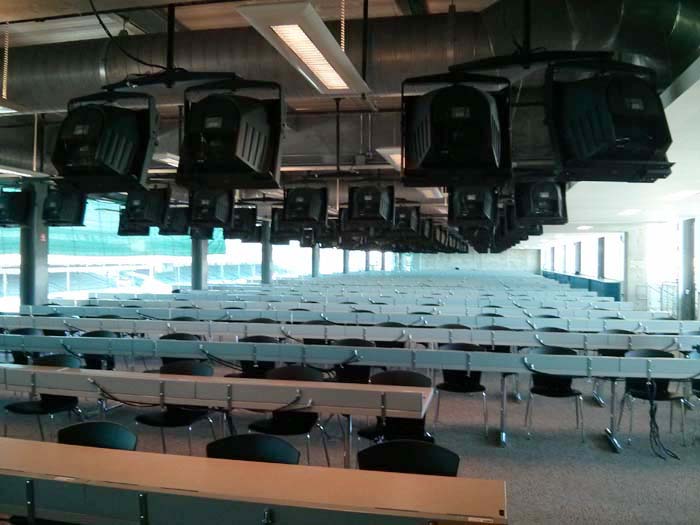 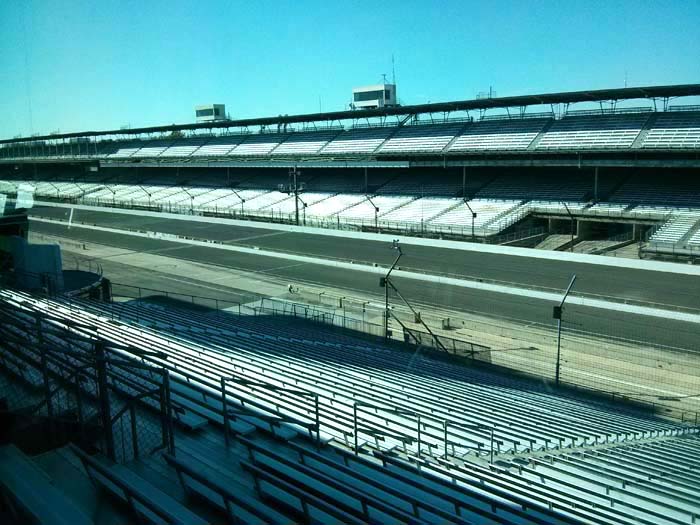 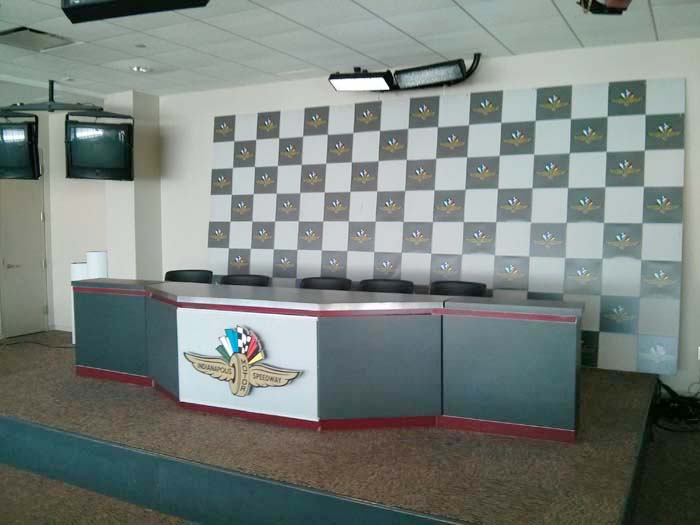 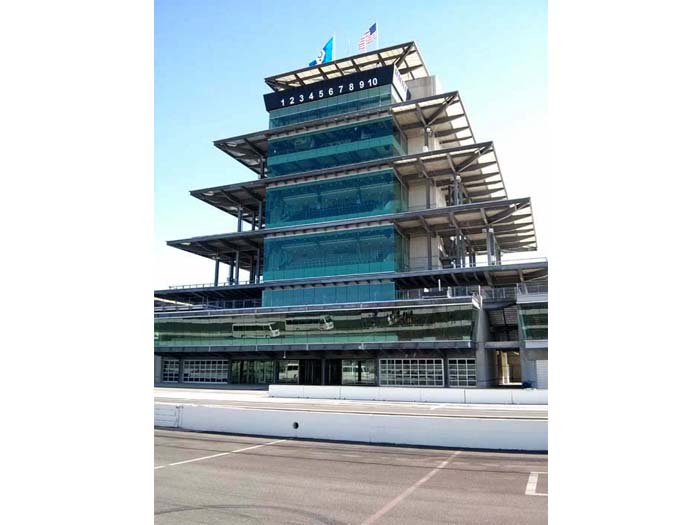 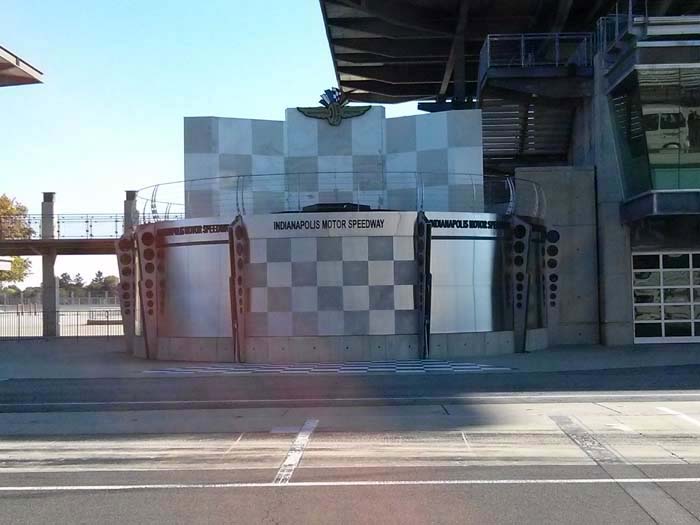 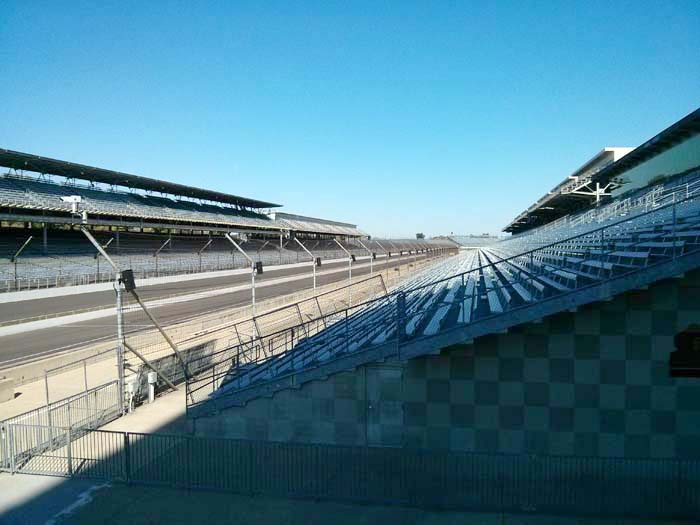 My “ticket” for the Grounds Tour – a badge!

On the tour bus at the start a Colts fan sat down next to me – she had a football shirt on, it was easy to guess! As usual with Yanks she started gabbling away to me. But she was OK and we had quite an interesting chat. I told her I was going to the game and she gave me some tips for later about timings and the like. We go into the museum together after the Grounds Tour and then she goes off to walk round with her friends whilst I browse the cars and exhibits.

It’s all very well done and impressive – well worth a visit – but I refuse to pay $25 for a t-shirt. And if you go to the circuit, do the Grounds Tour, which takes you around the track. These are timed events and they do get full, so book ahead.

After the Speedway I head into downtown, stopping off at a gas station on the way for a sandwich. I arrive in the centre around 3 pm. Just under 6 hours ’til game time. Peyton Manning is back in town and I’m going to Lucas Oil Stadium for the Colts vs. Broncos and the return of the Prodigal Son. I’m a 49ers fan and I went to Candlestick Park two weekends ago to see them play the Texans, for their last ever year at the old venue. I didn’t mention that I was in San Francisco before arriving in New Orleans, but that’s another story…

Anyhow, when I was looking at how to get from St Louis to Detroit, I also looked at what I could do in said stop-over. Identifying Indianapolis as a potential mid-point, and seeing what I could do there, bugger me when I realised the Colts were playing at home and who the opponents were. I just thought it would be a great experience. I got ripped off for a ticket on a second-hand ticket exchange but at least I got a ticket. Now you understand why all the hotel rooms were booked in town. There was a game on plus he was back in town.

I’d pre-booked a space in a parking lot downtown via ParkWhiz, reasonably near the stadium. It’s a nice warm sunny day and with time to kill I then wander around the city seeking out landmarks, many of which are very impressive. The central downtown area is quite compact, something I’m used to in US cities. I find a 9/11 Memorial that looks like it’s made of steel girders from the World Trade Center. However there’s no plaque or anything around the memorial to acknowledge this, which I find most strange. 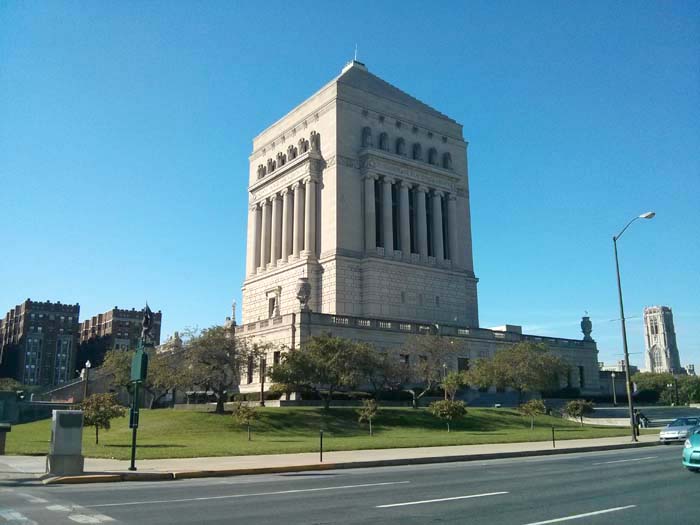 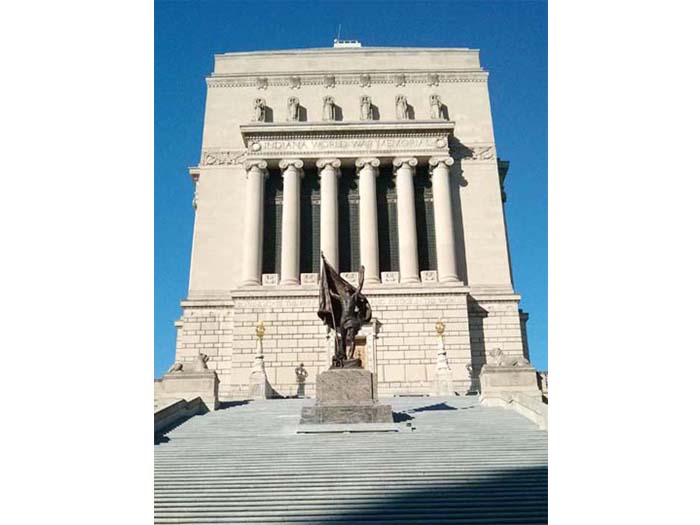 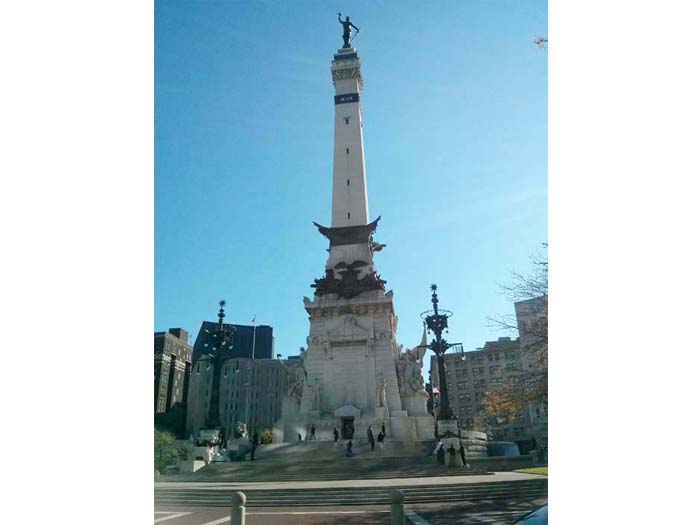 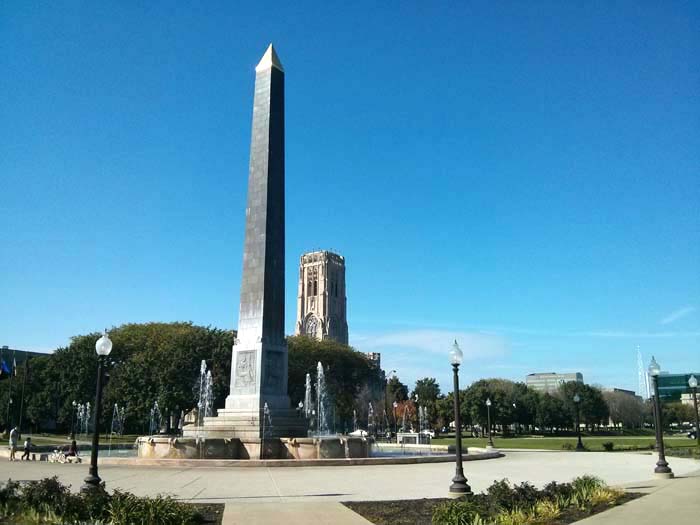 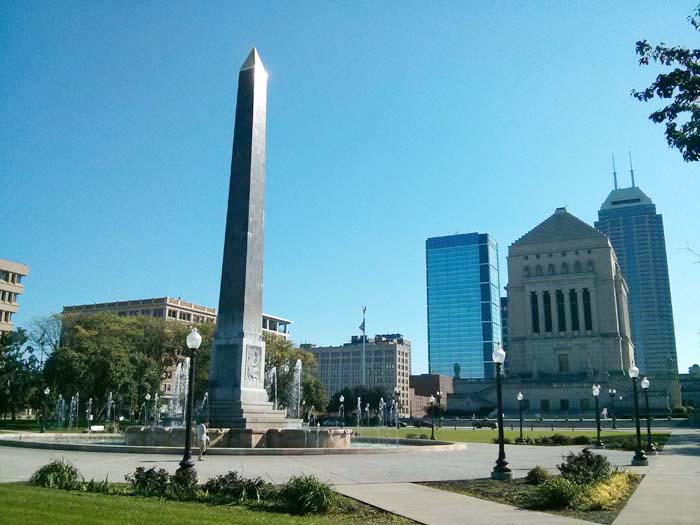 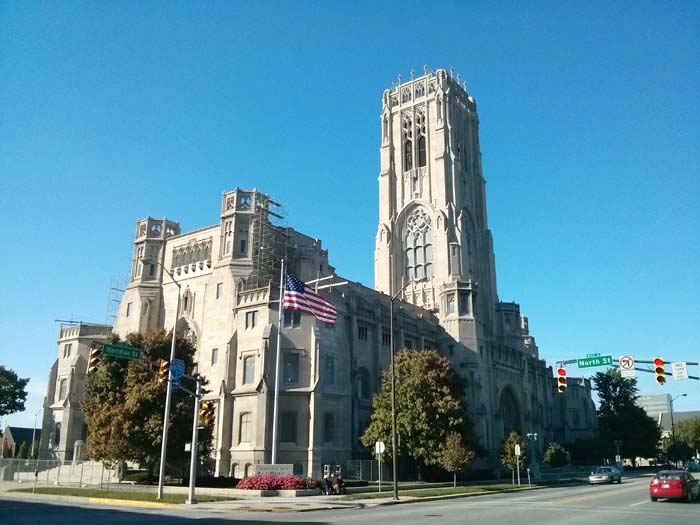 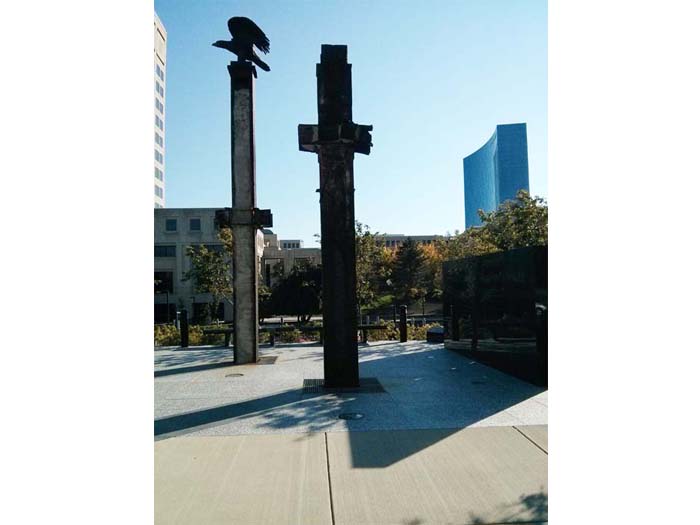 Lucas Oil Stadium is in the heart of downtown and I walk to the stadium early so I know where it is. The city is teeming with Colts fans unsurprisingly but also loads of Broncos fans. There’s a small pep party of sorts on a street near the stadium: music plus food and beer (neither free!). And then I run out of things to do and there’s still two and a half hours until kick-off. So I wander aimlessly for a while, people-watch all the Colts and Broncos fans and go back to everywhere twice. Eventually I head back to the stadium for food.

I get a burger and a beer, and whilst standing at a table by the catering truck a couple in their late 50s join me with their burgers and start chatting. My accent as usual gives me away as not being from these parts but they seem genuinely interested in my trip – “Oh, tell me more” – and it’s sincere, which some Americans aren’t. You know the thing, “How are you?” when they don’t actually give a damn. They’re a nice couple and it’s a pleasant chat, and frankly it’s killing some time… The guy buys me another beer, which is good of him. It’s an enjoyable and good encounter. We chat some more until about 7.15 pm when they say goodbye and head inside, as do I.

I take my time in soaking up the atmosphere, walking slowly to my seat which is up in the very top tier. I find my seat and whilst its high in the stadium it’s not too bad. It’s miles better than the top tier at Twickenham, which I went to a few years ago. From there the players look like matchstick men. Here the view is OK. Just before kick-off there’s a nice tribute to Peyton Manning on the video screen and he acknowledges the crowd in return – and the noise the crowd are making is almost deafening.

I’m surrounded by rabid Colts fans most of whom are extremely vocal, all the time, especially some women behind me and three louts to my left. My God, it’s loud in here – both the fans surrounding me, with their constant chatter to each other (they never seem to stop talking) and shouting out to the players, and the stadium as a whole. I’ve been in some noisy football (soccer) stadiums but the noise inside Lucas Oil Stadium tonight is incredible. It’s a good game and the Colts edge ahead. Of course, I’m an honorary Colts fan for tonight and am cheering them on. 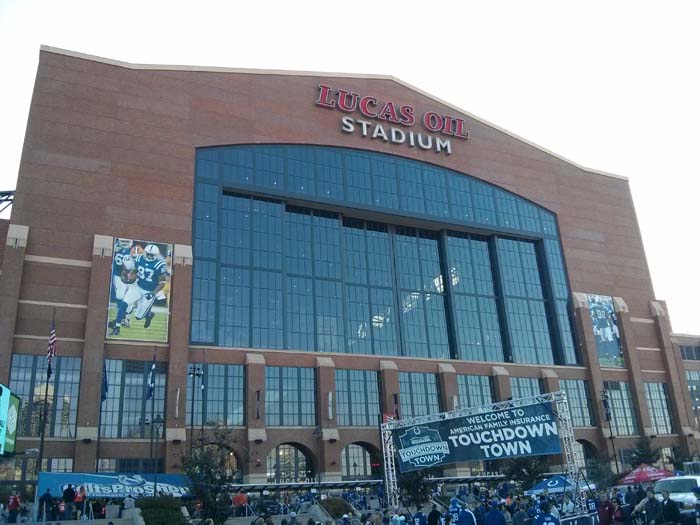 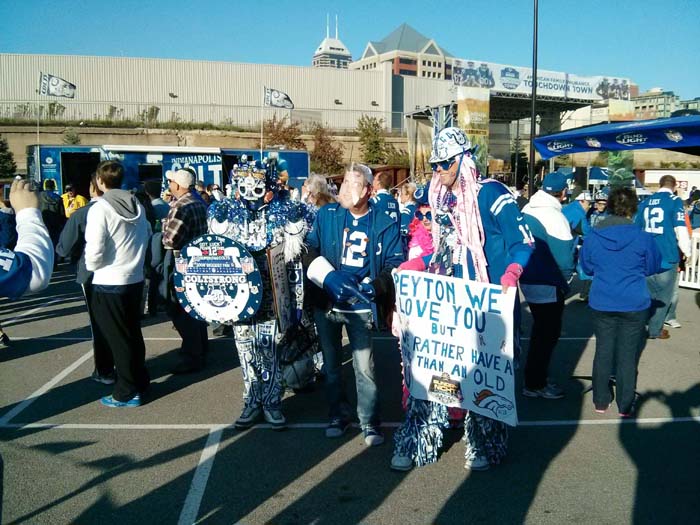 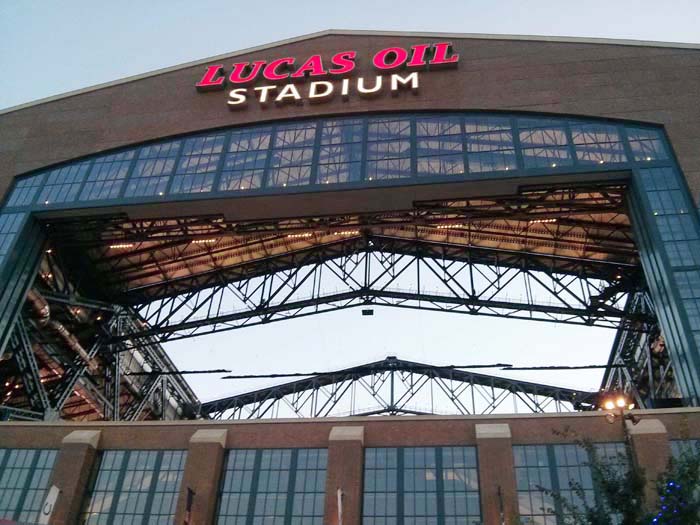 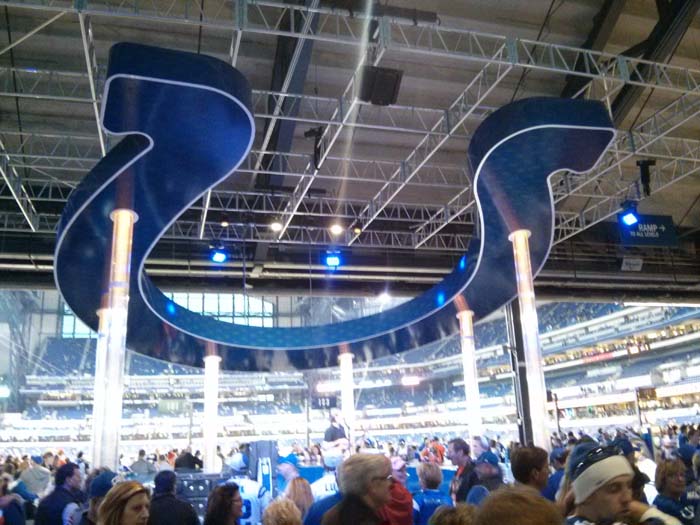 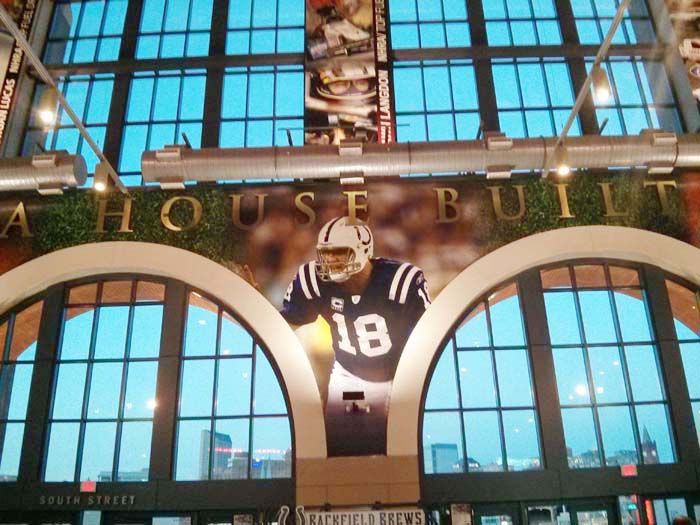 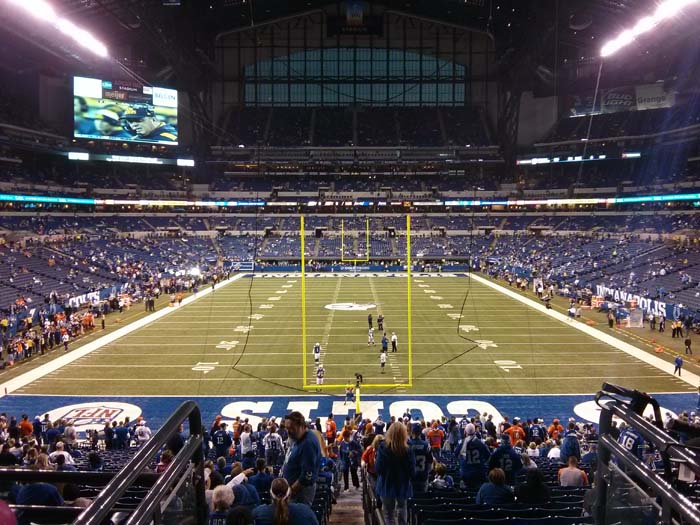 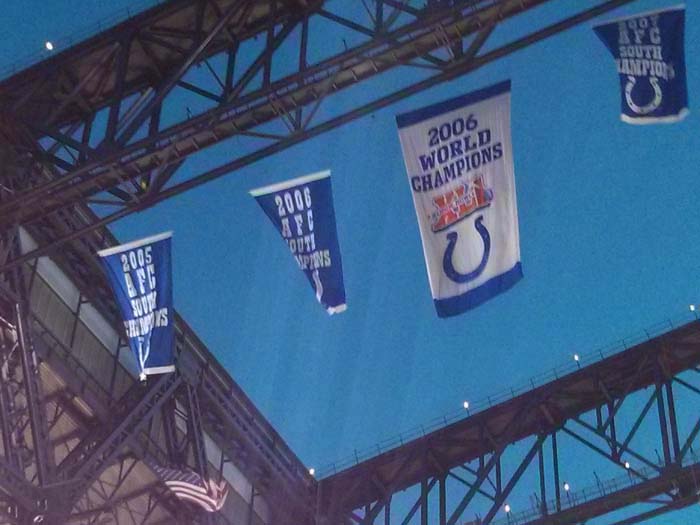 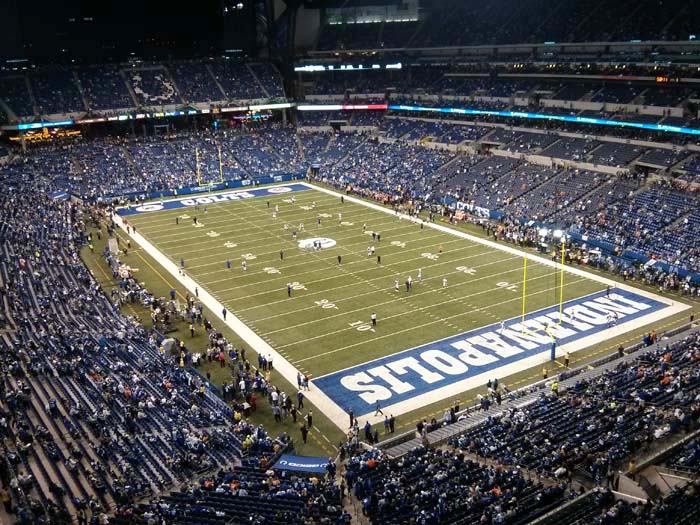 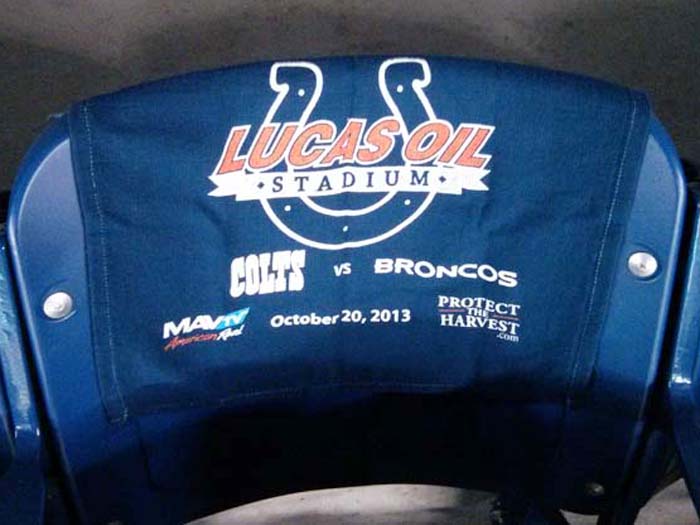 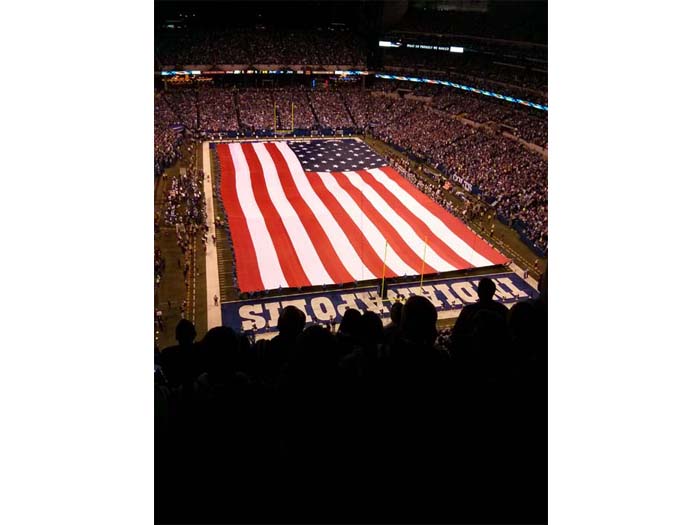 At half-time one of the chatterbox women behind me leans over and says “Why are you on your own?”, implying that it’s some sort of psychopathic behaviour to attend a sporting event solo. The insult of which I ignore but as soon as I open my mouth it’s the usual stuff of “Where you from” and “Where are you going”. Soon, everyone around me is interested and they’re all listening in. The chatterbox actually turns out to be quite ‘sweet’ and nice in normal conversation. As soon as the game starts again though she’s off again, with all sorts of fruity language aimed at the players.

Throughout the second half I turn and make a few comments to her about the game, which I think gets her respect. I have after all been an American Football fan for many, many years and do know quite a lot about the game. After all the various bits of banter, she’s all right I think – but I bet her husband, sitting three seats down from her, doesn’t have a quiet life.  🙂

The Colts win 39-33 and it’s time to leave so I turn around and high-five my new lady friend and say goodbye. She says “Have a good trip” and we part company. The game finishes really late at 20 past midnight (it was an 8.30 pm kick-off). By the time I’ve walked back to the car and driven back round the Beltway I don’t get back to the hotel until 1.15 am. So I chill out reading for a while and go to bed just gone 2 am.

I felt a bit down this morning for the first time on the trip. I think this was more do with having left music behind for now, after such a great time in Memphis. But also my slight disappointment with St Louis and not being able to stay downtown in Indy. I’d have liked to found some music last night and apparently there’s a famous blues club downtown but given it’s a 45 minute journey from downtown to the hotel, I wasn’t going to do that after driving all day. And I bet the buzz would have been great in the city after the Colts win. Anyhow, it’s another day tomorrow and I’m back on the road again.