To The Airport, Heading West

Time to leave Austin and fly west to San Jose. I spend the morning writing my diary before vacating the room at 12.15 pm. The receptionist could not extend my time any longer he said. 12.30 pm is the time a system-generated automatic overstay charge is imposed, so I sit in reception to await my shuttle bus to the airport. It is scheduled for a 12.50 pm pickup, so not too long to wait. I’m using SuperShuttle again. It is a really good service. I get regular texts to tell me the bus is on its way, plus the company has an excellent Maps-like tracking system where you can watch a little blue bus move along a street map of the city in real-time. It’s really cool. And very useful.

The bus is on time and we pick up two other people before heading to the airport, where we duly arrive at 1.30 pm. The airport is quiet today so I’m quickly through security then stop off at a Subway-type place to get a sub for lunch, which I eat  whilst waiting near the gate. The plane is on-time: it’s a near 4 hour flight to San Jose with Alaska Air – I got a cheap direct flight – but we are again on-time on arrival.

Back In Downtown San Jose

There’s a free shuttle bus that runs around the terminals that takes me to the Metro/Airport VTA station. From there I catch the light rail train to San Antonio station in the heart of downtown San Jose. It’s just a short walk and I’m soon checking-in again at the Four Points by Sheraton on South 1st Street, where I stayed last year. I got another good rate and I know it’s a decent hotel near the transport links I need. After unpacking I venture out to the Safeway I also used last year, and purchase my breakfast for the next two days.

Back at the hotel I chill for a while before going out for dinner. San Jose doesn’t really have much going on downtown. There was little choice in terms of live music for tonight, the same as last year. If, as I hope, I’ll be back to see the 49ers next year in 2018, I decide I’ll need to re-think where I stay next year. This is reinforced when I realise later that I’ve made a mistake in going to Café Stritch again.

First I’m asked for a cover charge to get in, which there wasn’t last year. But it’s not a cover charge, it’s a “voluntary contribution” of $5. “So I don’t have to pay it?” I ask the strange young chap on the door. “Well, not if you don’t want to, but it does help support putting the band on”, he replies. So I pay up in the cause of some hopefully good music. Second, I know that tonight’s band is some sort of jazz combo but there really was no other live music on in San Jose this Saturday night.

Well there was, actually. I discovered the Poor House Bistro earlier when searching online – a blues joint! – but unfortunately it was a ticketed event tonight, and had sold out. I can’t understand why I never found it last year – maybe they just discovered how to do SEO. Or it’s a new club? But there’s hope now for next year… I just need to book in early. There is also The Ritz downtown but on Saturdays they have a DJ-based evening, and tonight it’s ‘urban’. Nice. Not. The Caravan Lounge is also downtown but on the weekends this turns into a punk / goth / metal joint based on the bands advertised. I can’t remember who was on tonight but it looked even weirder than usual. So I’m back at the Café. What persuaded me – not that there was any other choice – was tonight’s ‘star’ at the Café is Wil Blades who plays a B3 organ in a “soul-jazz style”. Here’s hoping… 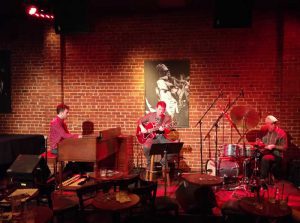 ‘Fraid not. The first song starts out fine but after a few minutes Wil, the drummer and guitarist are boring most people stiff with interminable bullshit soloing that is, frankly, tuneless. There are no vocals and every band member gets his 5 minutes in the spotlight, on every song. If they actually followed a tune or melody, it maybe wouldn’t be that bad. But Wil, the lead, is just playing a random sequence of notes with no structure or rhythm.

So I tune him out into background muzak and catch up on my diary. I also have a half rack of baby back ribs to eat and they are good. Whenever I look up from my diary writing it seems to me that very few people are paying any attention to the band. Most people in here tonight are in groups around tables and are chatting amongst themselves. Last year when Faye Carol was on, all the chairs were turned to face the stage and everyone was listening to her sing. Tonight, apart from a couple of sad bastards right in front of the band who are inanely nodding their heads as the jazz ‘groove’ gets put down, I don’t see anyone else listening.

I then ponder why this city is dead on a Saturday night. There’s no entertainment district that I can find and what few clubs there are, are very spread out. I’m just surprised there aren’t more bars and clubs; I mean, it’s not a small city. Whatever, it is what it is. The ease of access to Levi’s Stadium via the VTA is great but a definite re-assessment of where I stay and of the nightlife is required for the future.

After an hour or so I’ve had enough and go back to the hotel for a nightcap in the bar. When I left there was a group outside having a birthday celebration BBQ. When I return however this ‘party’ has moved inside and into the bar area. Although I am not prevented from entering the bar, it’s effectively a private party. The house lights are off, there’s a DJ pumping out hip-hop, very loudly, and disco lighting illuminating the area.

I’m somewhat taken aback by this. These party guests have taken over all the lounge area seats – not that I would want to sit with them at their ‘party’, especially as the music is so loud as to be nearly painful – but I’m a guest at this hotel and I’m being kind-of excluded from the bar.

I buy a drink and with nowhere to sit I find a table in the restaurant section away from the noise where some dinner guests were still finishing their meal. A few minutes later a young waitress comes across and says the area is closed and tries to throw me out! I firmly – but politely – tell her to get lost as I’m a guest in the hotel and they’ve “closed” the lounge. So I need to sit here, I say: just let me finish my drink and I’ll be gone shortly. She goes away but then 5 minutes later another waiter comes across and tries the same thing. So he gets the same treatment. Neither bothered me again. And I was off to bed 15 minutes later. 🙂

I found out on check-out that the hotel does not own or control the bar / lounge / restaurant. Whilst it is in the hotel building, it is operated by a separate company and they apparently do what they like. They are supposed to tell the hotel about such events as tonight’s, but rarely do. WTF? It is clearly implied by the hotel that this is its restaurant & bar. But they have no control over it. What’s all that about? Weird.