I eventually find a place called Grace’s Table for breakfast, a place recommended by Steve, the wine tour guide. I have bacon & egg, fruit & juice plus coffee – it’s a bit expensive at $23 but then it is Napa. However it was good and fills me up for the day. I check out of the hotel and set off for the short drive to San Jose, about 100 miles or so. It’s a nice bright sunny day and there’s good scenery to start the journey as I travel along Highways 12, 121 and 37, and then I eventually turn onto Hwy 101 South. The scenery is still good as Hwy 101 winds its way through the mountains to the north of San Francisco. I get glimpses of the sea to the left as I get nearer to SF and then I see the towers of the Golden Gate Bridge in the distance with San Francisco Bay and the city itself in the background. A great sight.

The highway bears right again and then the towers are right in front of me in all their glory. After crossing the Bridge I’m in the heart of SF but I make a slight wrong turn off Hwy 101 before rectifying the error and finding my way onto Marina Boulevard. I stop at San Francisco Marina Yacht Harbor to stretch my legs for a few minutes before recommencing along the shore heading towards the Bay Bridge, or the San Francisco–Oakland Bay Bridge to give it its full title. It’s turned into a bright, sunny and almost cloudless day – and it’s also hot again. I drive along The Embarcadero past all the various Piers in some heavy and slow moving traffic and then up I-180 E onto the Bridge. I’m going this way to San Jose rather than down Hwy 101 because I’ve never been over the Bay Bridge before or driven on I-880 whereas I’ve done Hwy 101 many, many times from my days when I used to travel to Silicon Valley on business. 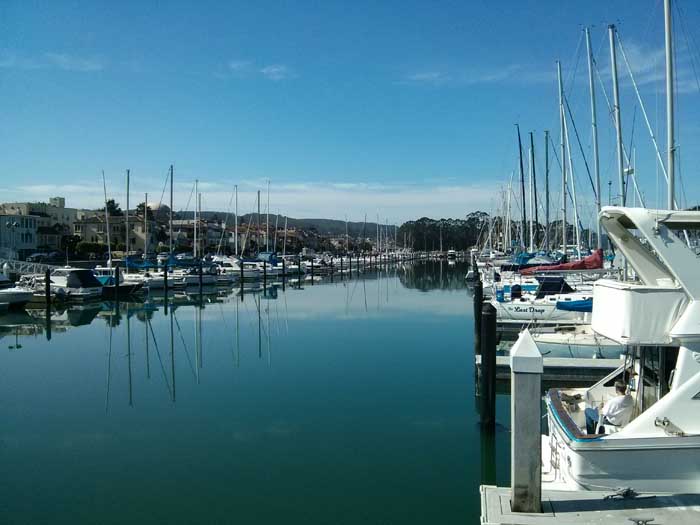 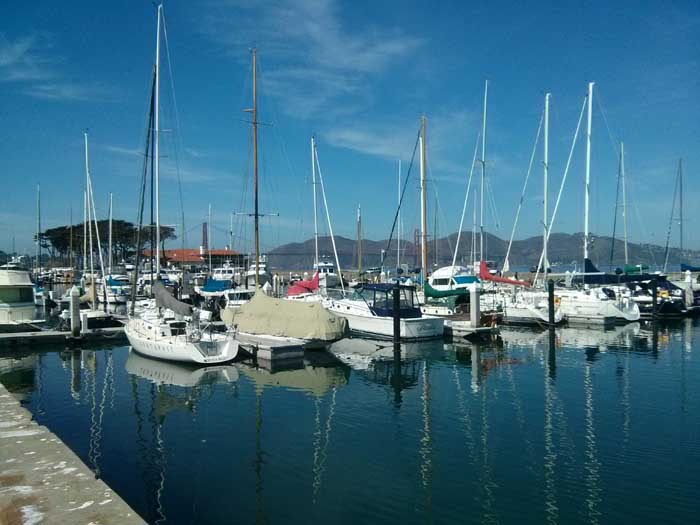 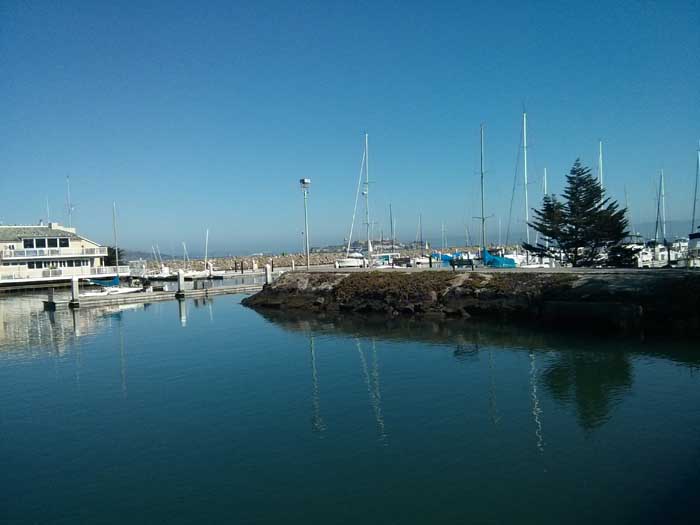 On the initial part of the Bridge however I’m underneath the roadway going in the opposite direction and I can’t see a thing of the Bay itself, which is very disappointing. Soon after though, I think about halfway across, the Bridge changes into a side-by-side carriageway arrangement and I can see off to the right towards Oakland and down the San Francisco Bay for some good views. Onto I-880 S and suddenly there is loads of slow moving traffic as I head past the Oakland Raiders stadium to my left and I begin to wonder if I might be late. Thankfully though the road clears a few miles further on and I make good time and arrive at the Arena Hotel in San Jose just after 1 pm. It’s been a good drive apart from some heavy traffic in SF and on I-880. After check-in at the hotel I pay my Golden Gate toll by phone and then head out at 2.15 pm to find the San Jose Diridon Light Rail station (VTA) for transport to Levi’s Stadium.

On The Train To Levi’s Stadium

I get a train ticket and the train arrives, but it’s quite slow going and there’s loads of Seahawks fans on board, as well as plenty of 49ers. The train pulls up at the stadium stop and I just follow the crowds towards the Stadium. However there’s heavy security with body scanners to get into the stadium perimeter and I don’t have my actual ticket yet, as I have a Will Call ticket. This means I have to be escorted to the Ticket Office by a security guard. He takes me to where I need to be and thankfully all is in order, I am given my real ticket and I can go inside!

It’s very busy inside already at 3.45 pm – kick off is 5.30 pm today – with loads of people milling around. I walk all the way around the stadium on the concourse level taking in the sights. I grab a beer and hot dog for a late lunch, take lots of photos and, frankly, I get a bit emotional at having made it here… There are amazing sights all around. OK, it’s only football stadium, I think it’s amazing. I go to find my seat in one of the sections of the Levi’s 501 Club and it really is a ‘Club’: it’s a separate area inside the stadium with its own entrance. So the hoi-polloi can’t get in and inside there numerous food and drink stands. It’s even air conditioned inside! Which is well needed because the temperature has risen really high again – whilst waiting at the train station I was boiling hot and it’s still very hot. Despite the plethora of food and drink stands I discover at half-time that there are still queues though. I chat to a hostess and discover the Club stays open for an hour after the game, serving food and drink. I then talk to a security guard and he tells me that the VTA runs until midnight so I decide I’ll hang around after the game to have a beer and miss post-game crush at the station. 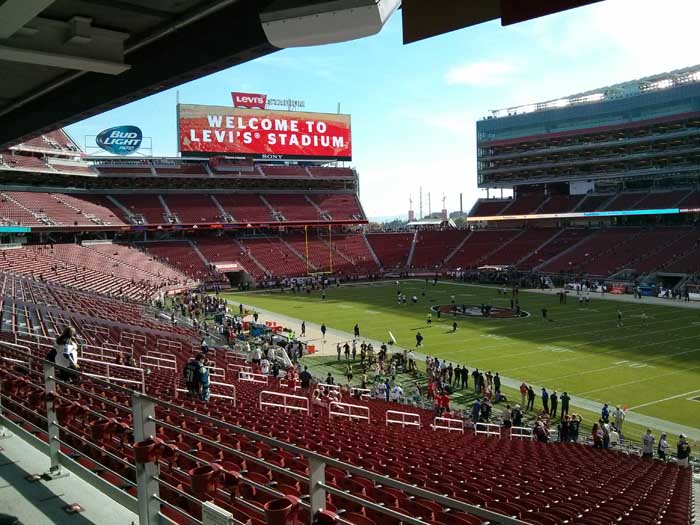 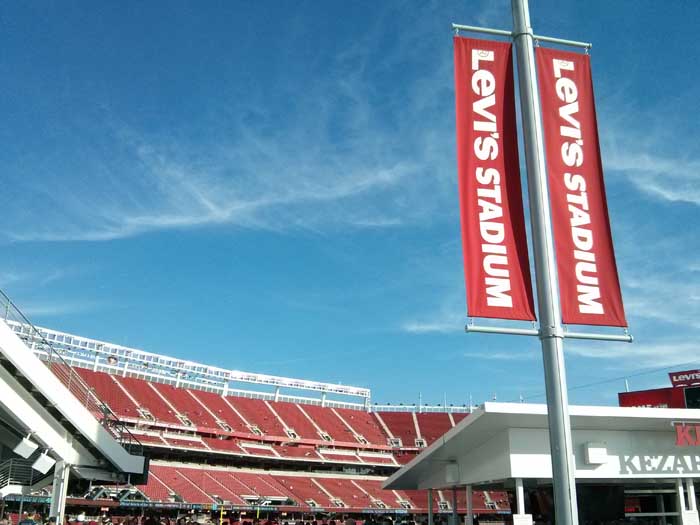 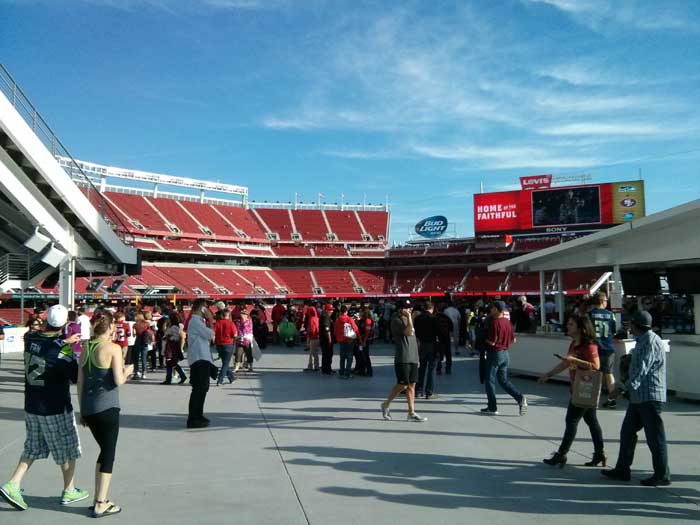 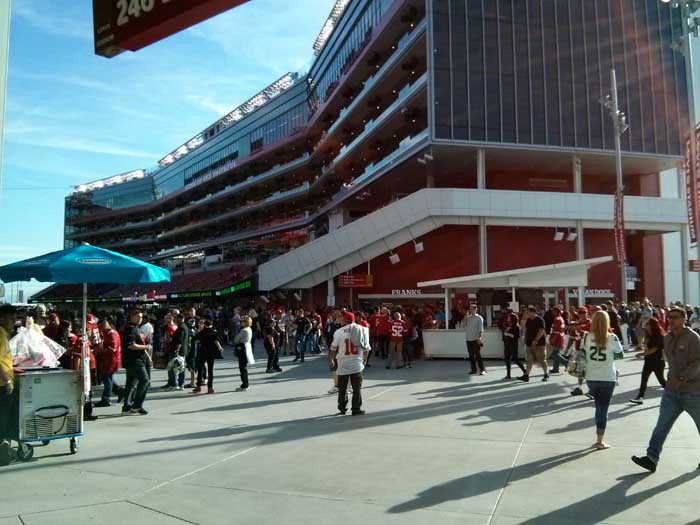 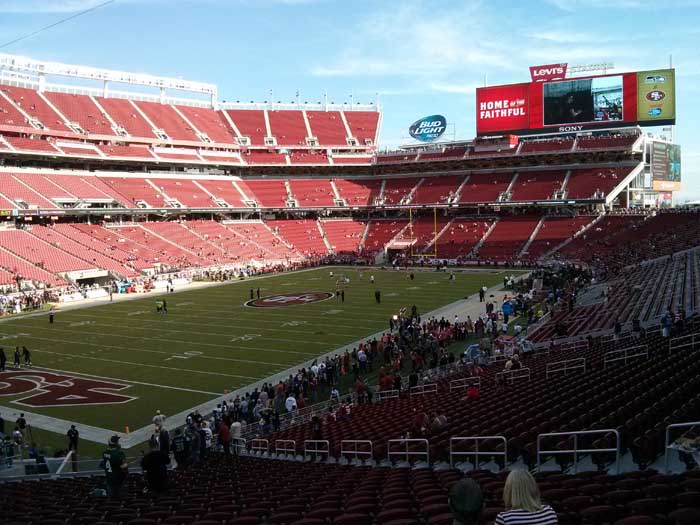 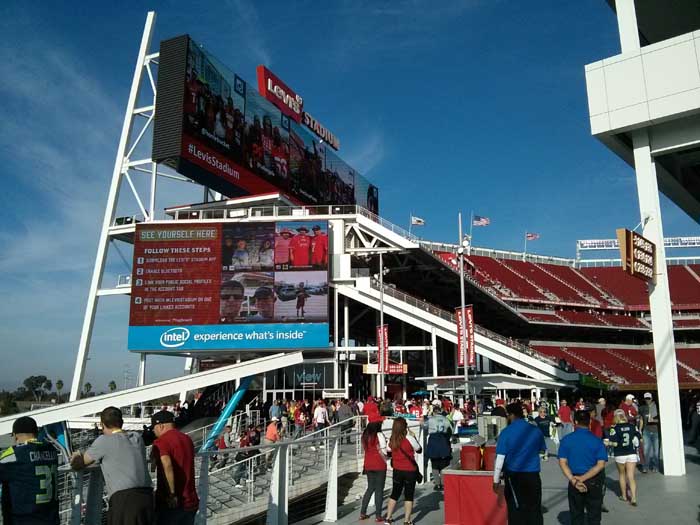 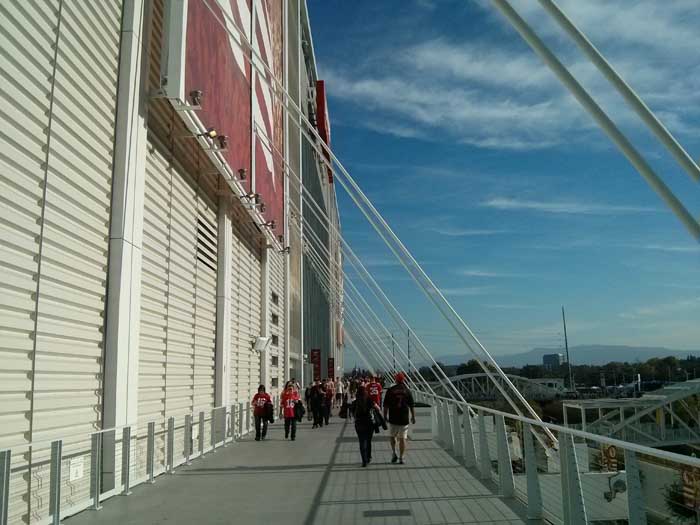 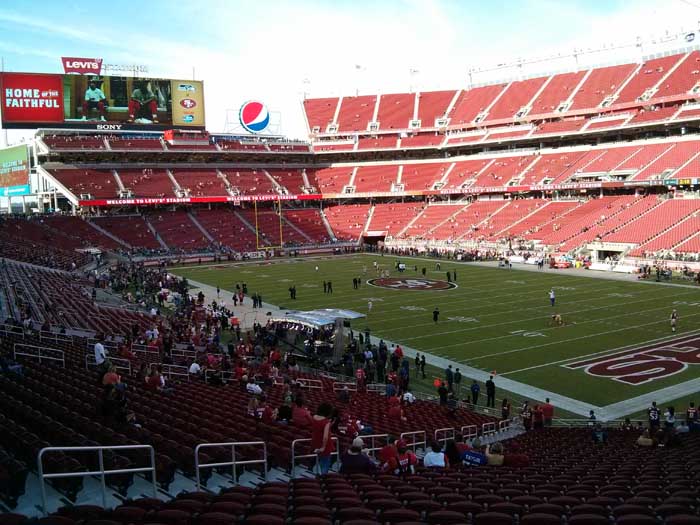 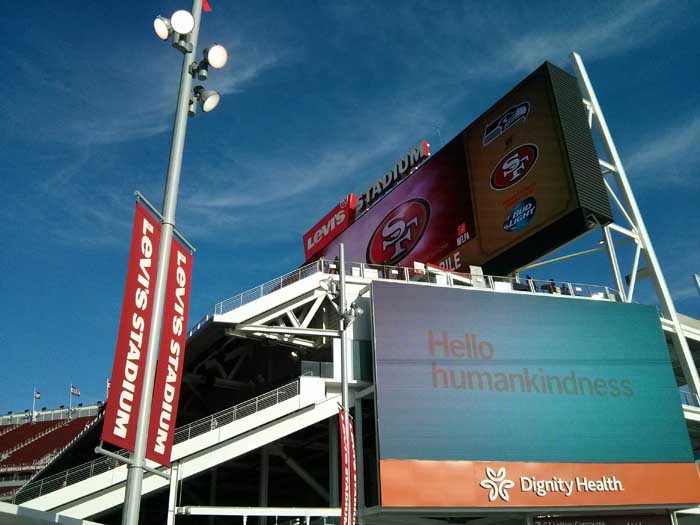 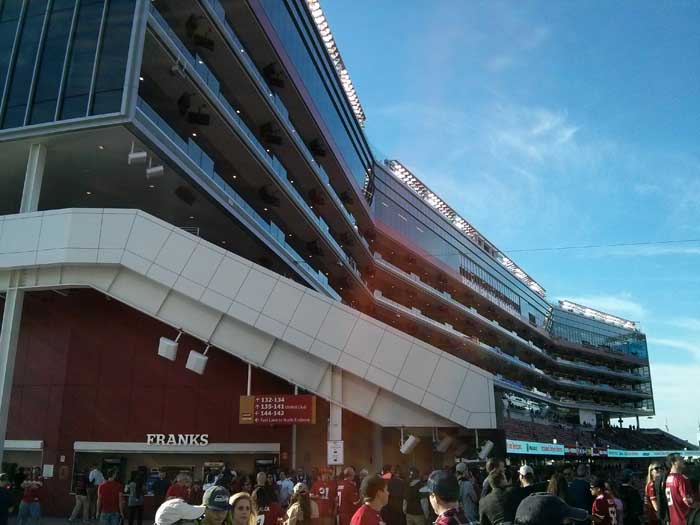 The game gets underway after the usual razzmatazz, it’s all a very impressive spectacle but the in-game announcer and music is way too loud, it’s almost deafening. “Make some noise” we fans are exhorted to do, but it’s bloody noisy enough without us thank you. My seat is in a great position, which is about the best thing I can say about the game as the 49ers are unbelievably bad. Something is very wrong with this team this season and it’s not even a contest with the Seahawks. A Seahawks fan near me is being extremely provocative towards the home fans and a few shouting matches break out over his goading of the locals. I’m concerned this might escalate into violence but at half-time he goes off somewhere. What an asshole. For whatever reason the dickhead doesn’t re-appear for the start of the second half, so thankfully any nastiness is avoided. He does eventually reappear sometime in the 4th quarter but this time he keeps his mouth shut. 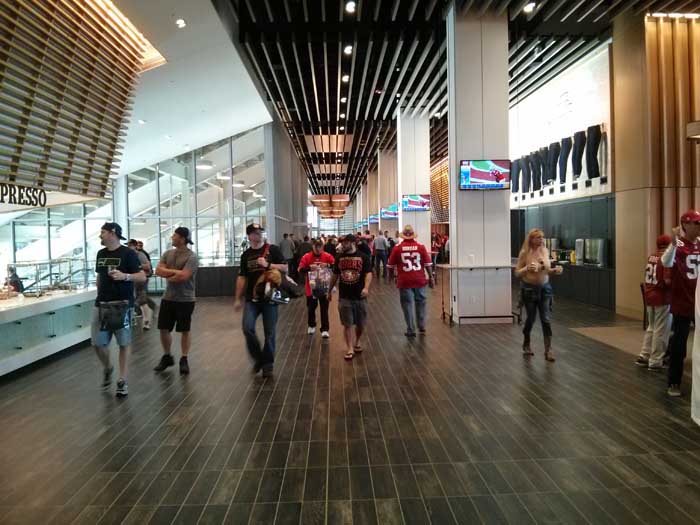 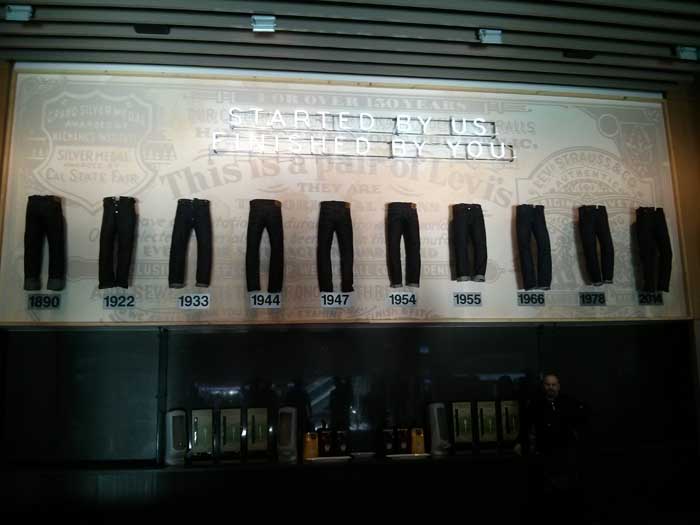 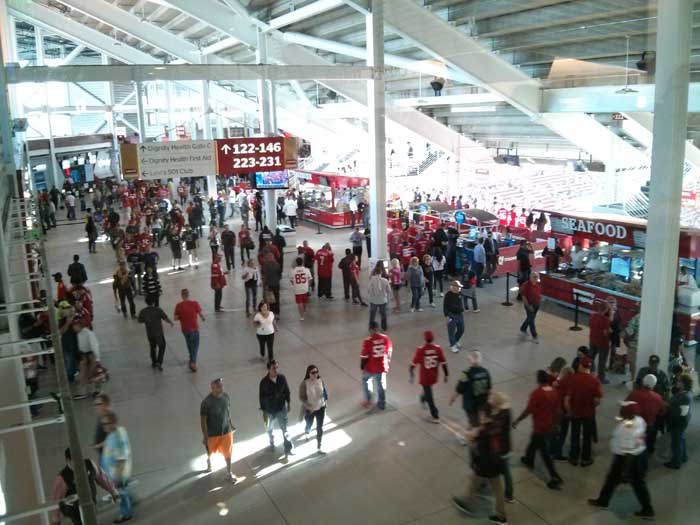 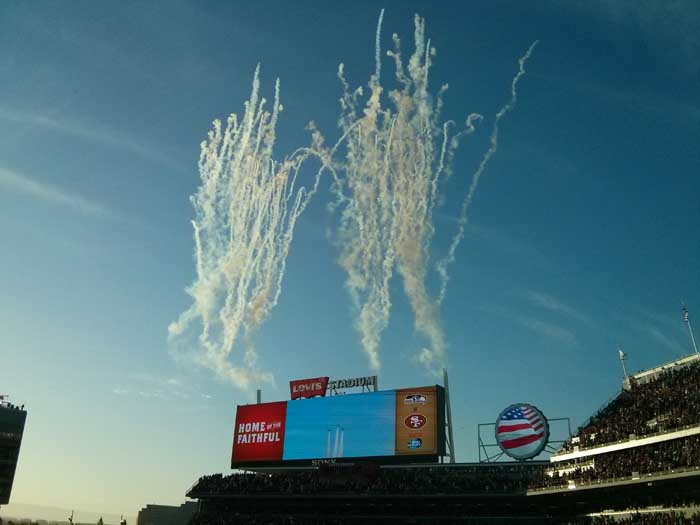 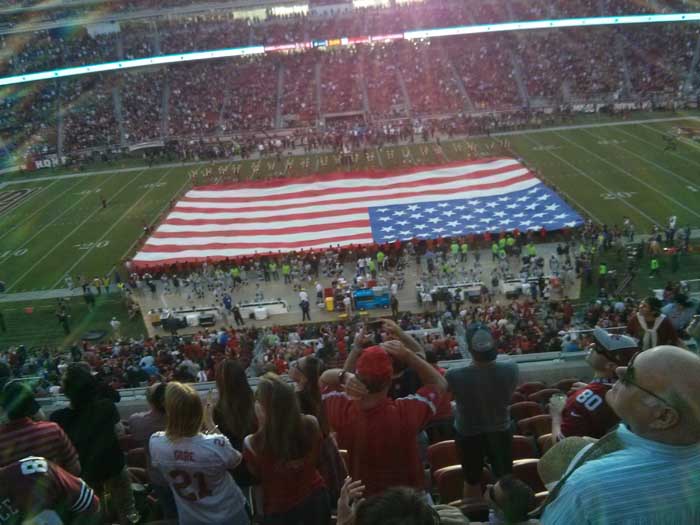 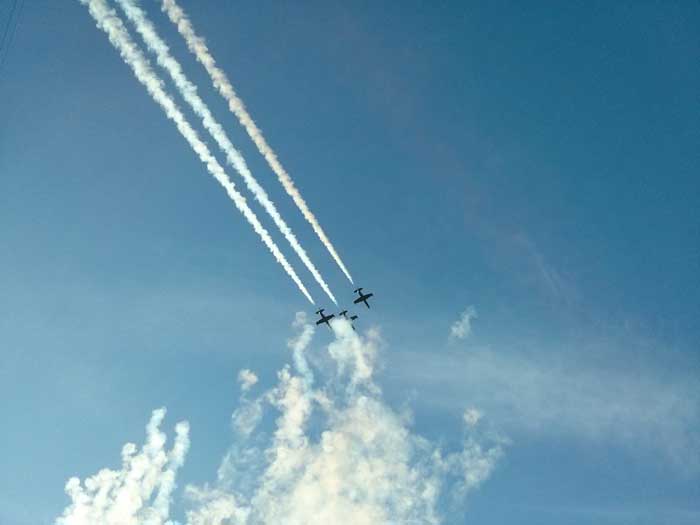 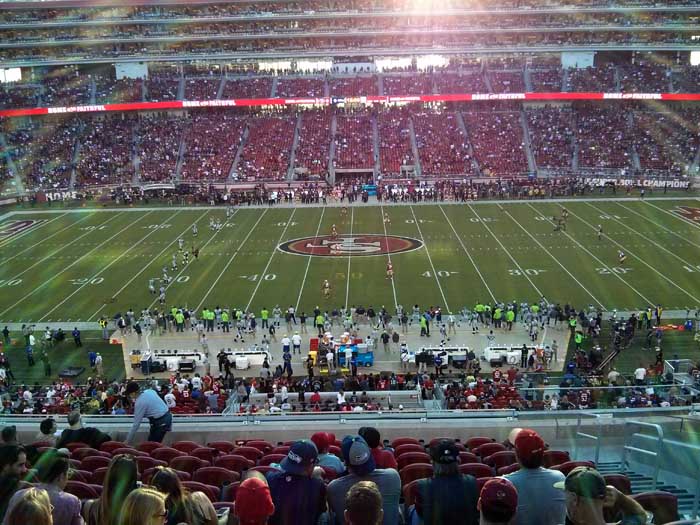 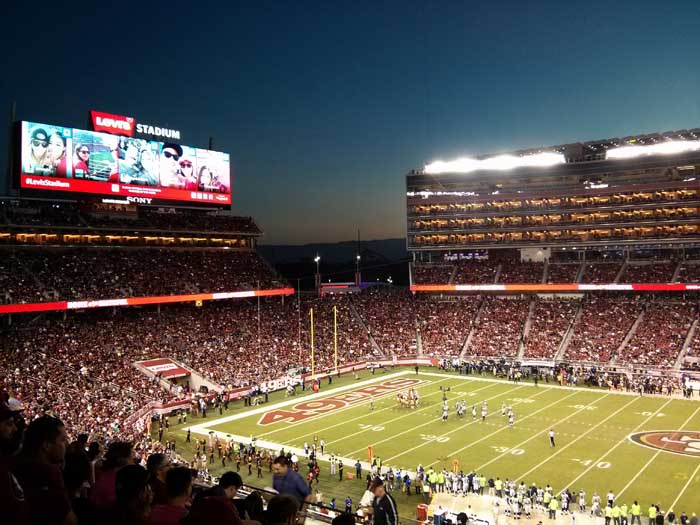 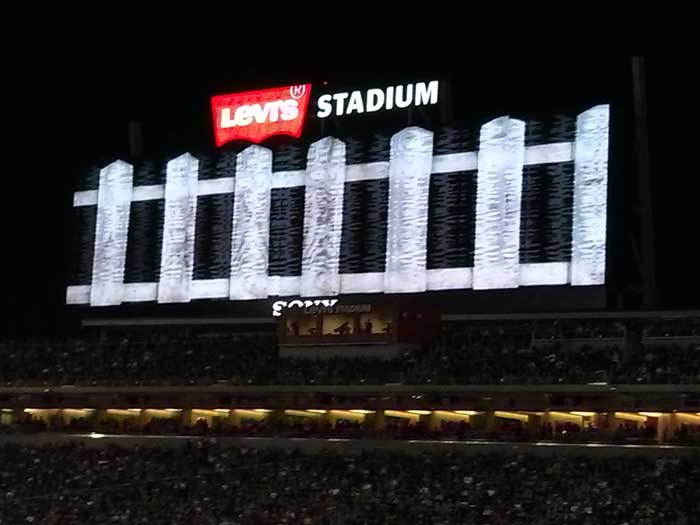 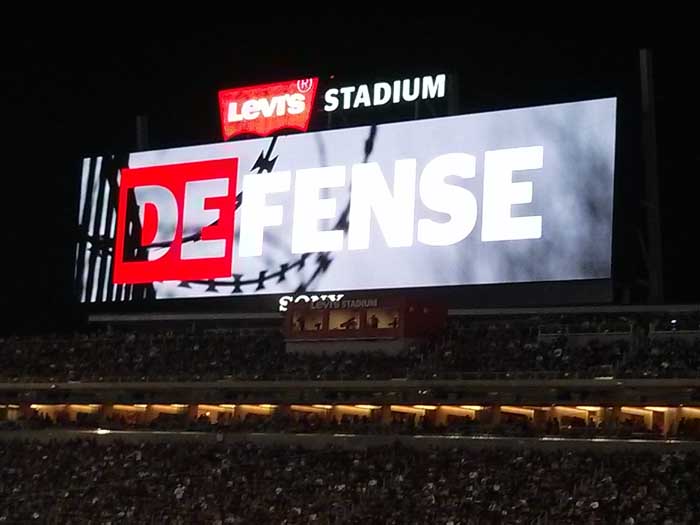 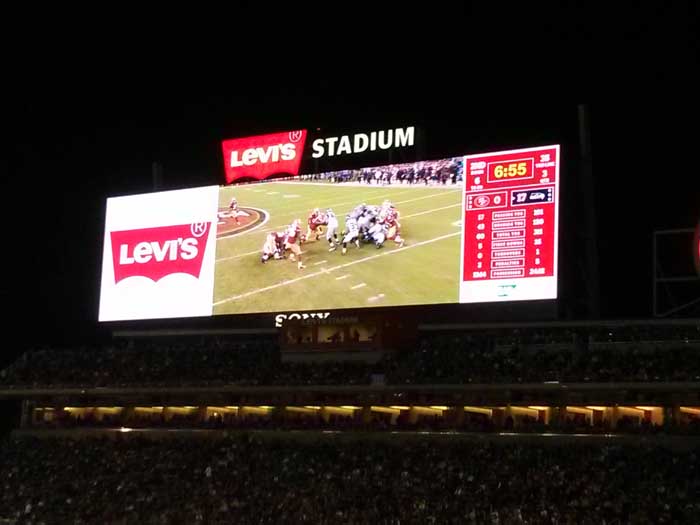 As the 2nd half gets underway my phone alarm sounds and I open up the British Airways app and do an online check-in for the flight home tomorrow. How cool is that? Boarding pass on the phone…

As the 3-20 rout of the 49ers develops the stadium starts to empty but I stay until the bitter end, by which time the place is pretty empty. Not a good sight. At the final whistle I grab a beer and another hot dog in the almost empty Levi’s Club. After about 30 minutes I leave to go to the VTA station. There’s no queue and a train turns up straight away, so I board with ease and even get a seat. Good plan Batman. It’s about a 10 minute walk from the downtown station to the hotel and I’m back there just gone 10 pm. It’s been a good, even great in places, day – apart, of course from the result…