A Night At The WigWam Motel

When I’m on my way again this morning it’s the usual start out on Rt 66 for a short while before re-joining I-40 W. But it’s just for a few miles before I exit right to find Goffs Road, true old Rt 66, about 6 miles north of I-40. This is a 24 mile-long stretch of the Mother Road in the desert. It runs parallel to the railroad for much of the time, but other than that, there’s not much to see.

Unfortunately a couple of years ago some storms washed away sections of Rt 66 between Essex and east of Amboy. Normally one would cross I-40 at Fenner and head south on the original road. But they still haven’t repaired the damage yet so I have to re-join I-40 W at Fenner. It’s a long detour: 30 miles due west on I-40 until an exit left onto Kelbaker Road, then south for nearly 12 miles on that to re-join Rt 66.

Soon after getting back on the Mother Road, I enter Amboy. Well, what’s left of it. There’s a gas station, a sign and a motel that’s been closed for many years – and that’s about it. The sign however is a Rt 66 classic: for Roy’s Café and Motel. The motel is still standing but derelict. EZ-66 wrote (in 2015) that someone had bought it (in 2005, actually) with the intention of restoring and re-opening the motel. However it was still empty in late 2019, with little sign of any activity. The outside of the motel buildings look in good condition so maybe there’s hope.

There are quite a few sightseers at Roy’s, a bit surprising for such a remote place. But as soon as I’m back on the road, I don’t see another soul for many miles. It is a great drive from Amboy to Ludlow. As I drive I can see black lava flows on either side of the road from the Amboy Crater, an extinct volcano.

Just after leaving Amboy is the ‘ghost town’ of Bagdad, where there once was a real Bagdad Cafe. Nothing – absolutely nothing – remains of the town today however. A 1987 movie, Bagdad Cafe, was made supposedly based in Bagdad. But the film was shot at the then Sidewinder Cafe in Newberry Springs, 50 miles west of the site of Bagdad. The café is now a tourist destination and it changed its name to Bagdad Cafe to capitalise on the movie. Just before Newberry Springs I’d passed the Lavic Lake volcanic field where more black lava flows can be seen roadside.

Thankfully there are few visits to an Interstate for most of the rest of today, until near the end, and one small excursion near Barstow to skirt around a US military camp that was – bizarrely – built straddling Rt 66. Once built, Uncle Sam decided that no-one could drive on Rt 66 through their camp, so forcing ’66ers like me back onto I-40.

Off I-40 again and into Barstow, I find and stop at a Walmart, buy lunch, use their ‘facilities’ and eat lunch in the car park. There are clear blue skies and it is very warm, if not actually ‘hot’. There is a Route 66 Mother Road Museum here in town but I discovered last night it’s only open Friday to Sunday. I drive by just to check this hasn’t changed, but no, it’s closed. Out of Barstow, it’s a nice drive to Victorville. On the way there I stop at the famous Elmer’s Bottle Tree Ranch, a bizarre artistic creation by the roadside. The owner died a few months ago and the Ranch then got vandalised. It only re-opened three weeks before my visit, so I’m lucky to get to walk around and marvel at the weird stuff on show.

In Victorville I stop at another museum, the California Route 66 Museum. It is quite small and decidedly average I’m afraid (the museum did have its own website but the domain expired in January 2021 so maybe it’s closed). I-40 ended its life at Barstow and now I-15 is the Interstate that heads towards Los Angeles. I’m routed onto it just outside Victorville, and there is heavy traffic for about 20 miles or so before I can leave and rejoin Main Street USA. Before getting off, the trip through the Cajon Pass on I-15 S has really great scenery.

Having departed I-15 though, driving Rt 66 on Cajon Blvd is even better, a really nice drive. Once this road ends though, I can tell I’m getting close to LA as the metropolitan sprawl starts to grow. Approaching San Bernardino, Rt 66 is a so-so drive, with the commerce of Greater LA starting to clutter and dominate the roadside ever more. 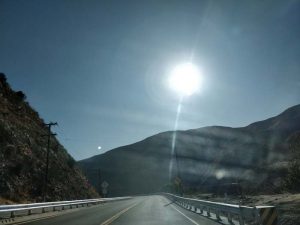 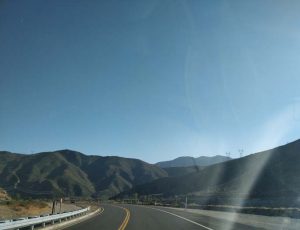 Miles later, just east of the Rialto city limits, I pull up at the Wigwam Motel with their classic Tee Pee rooms, recently restored to the former glories.

They are rather bizarre, but I do like them. The space inside is small, compact but functional, if a little dark through small windows. There is nothing around the Wigwam Motel other than bad news though. I’d read it was not a good neighbourhood and was resigned to driving somewhere for dinner. The receptionist however suggests an Uber and recommends a recently opened bar.

After a successful recce out for gas and breakfast, then sorting tomorrow out, I order a Lyft to Septembers Taproom and Eatery on Renaissance Parkway. It’s a $10 ride and takes a good 20 minutes or so to get there, so not walking distance…

It turns out to be an OK place. There’s no bar chat with anyone, but there’s baseball and football on TV with LA teams playing. Of course as soon as the games end later on, the bar empties. From being full, it’s now more than half empty.

I order a beef au jus sandwich. It is not huge. It is f****** ginormous. I am amazed at myself in even eating about half of it. It is also very nice but a massive waste of food. Why does America persist with serving up portions of food that a normal person cannot eat? I take the other half with me to eat for lunch tomorrow. (However, in the morning, it smelt a bit funny, so I dumped it.)

Towards the end I did end up talking to a bartender. This bar, like almost every bar I’ve been in on this trip, has a huge array of beers on offer. The guy asked me what I thought of the choices and we discussed it for a while. We both agreed that craft beers in the USA have got out of control, just becoming weirder by the day.

On the 20 minute Lyft ride home I’m reminded of the sheer vastness of LA. It takes this long to get a half-decent bar? Who’d live here, I wonder to myself.

“If you ever plan to motor west” *

Back in my Tee Pee at the Wigwam Motel, I ponder on another varied day on the road. From my early trip exuberance, remembered as I wrote up my diary, I can see some weariness coming in, in the latter stages.

It’s such a very varied experience. Months after the trip, I can now say, “It’s brilliant, go do it.” Yet my diary write-up at the WigWam Motel says: “I’m not sure about the whole Rt 66 experience. It’s definitely not ‘exciting’. Interesting, for sure. But worth it? Not sure yet.”

Well I am now. Definitely worth it. Road fatigue, maybe, was at play at the WigWam Motel, or a ‘road hangover’ from the tyre trauma of the previous day. And truth be told, there were some good bits today, but maybe being back in a mega-city after being on the open road has impacted my viewpoint tonight. That’s why I do the diary, to be honest with myself and what I thought of the day. I learn from my musings for the next trip.

It’s a journey, obviously. But one that I didn’t know what to expect. Or whether I’d like it. But that’s always been the case. You never know. That’s why I do it.

So despite what I originally wrote about today, here’s what I think now: do Route 66 before you die. You won’t regret it.