Arrival In The Windy City

Back In Chicago Again

An early start for this year’s road trip, leaving home at 7.15 am for a 10.30 am flight. The flight times to Chicago were either then or arriving around 8.30 pm local, and I thought the latter to be too late.

I’m travelling First again this year with BA. So there’s some peace and quiet in the Concorde Lounge to begin before going to the gate. We’re on time and the service is excellent, again. We land on time at O’Hare International Airport at 1.10 pm local time. Immigration is a bit manic but I’m soon through and outside.

At the car rental desk the car I ordered has been misrepresented by the company I booked through. The desk agent tells me I’m only entitled to a much smaller car than I thought I booked. She will not alter her stance either, to my increasing annoyance. But for such a long drive ahead, I want – nay, need – something bigger. So I pay for an upgrade and will have to sort out the issue out upon my return home.

After checking my red Chevrolet Malibu thoroughly, I’m driving away from the airport at 3 pm. The traffic heading into Chicago is terribly congested at such – to me – an early hour. I’m crawling along for more than two-thirds of the 18 miles into the city. Hence I don’t arrive at the Hampton Inn & Suites Chicago – Downtown until 4.30 pm.

The hotel wanted $60 for a night’s parking and I thought that was too much. So I leave my bags in reception and drive around the corner to a pre-booked ParkWhiz garage a block or two away, which cost me $23. After a short 5 minute walk, I’m back at the hotel.

Out For Some Blues 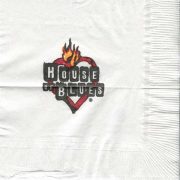 Checked-in and up into the room, I find said room very spacious and in good condition. Breakfast is included, so no need for a trip to a 7-11 tonight. Around 6.30 pm I leave to walk the short distance to the House of Blues. Keith Scott, first up tonight on the Back Porch Stage, is on a break when I arrive. He’s a singer-guitarist and, on his return, is quite good. I don’t recognise any songs he plays, but they are all blues-y type numbers.

The audience grows as his set develops and there’s a good crowd by the time he finishes at 7.45 pm. He gets a good, warm round of applause to close. Earlier, I discovered some decent draft beer on offer at the bar. I order a small portion of wings to eat. I hadn’t eaten since UK-time lunch, so needed something now it’s gone midnight on my body clock. Conscious, however, of not getting bloated by over-eating when trying to manage meal times across different time zones, I don’t eat all the wings. They were also just OK.

Next up music-wise is Dave Spencer and his band. It’s what I’d call modern blues, and almost all his own tunes. The band are all accomplished players with Dave on lead guitar plus bass, drums and keyboards. There are some instrumental numbers, then Dave and the keyboardist swap lead vocals on a few tunes. 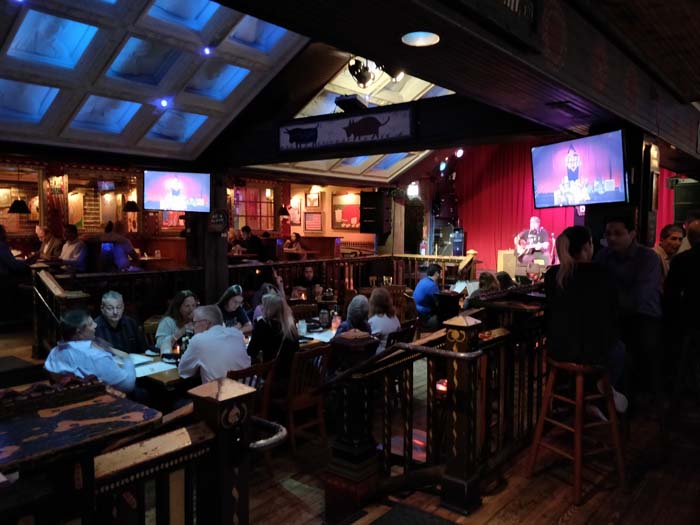 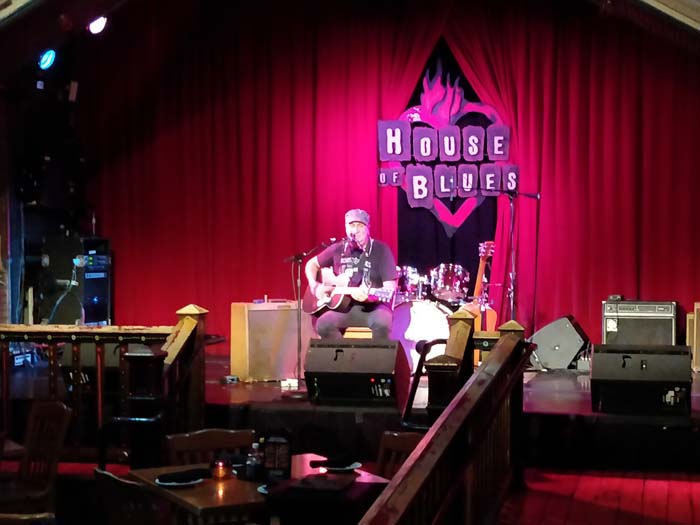 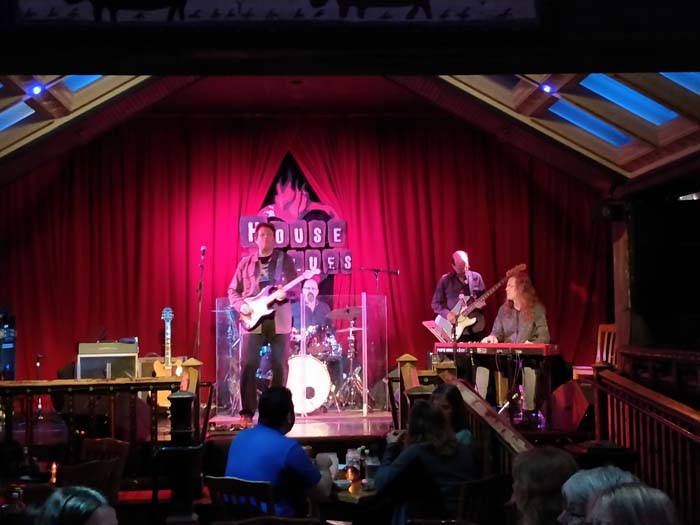 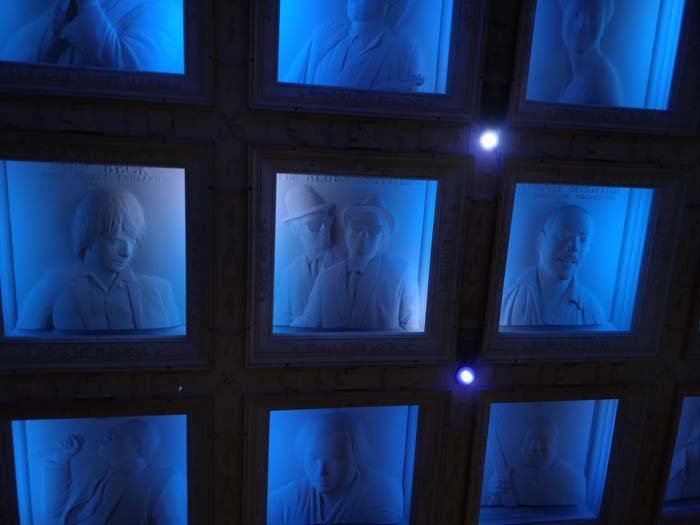 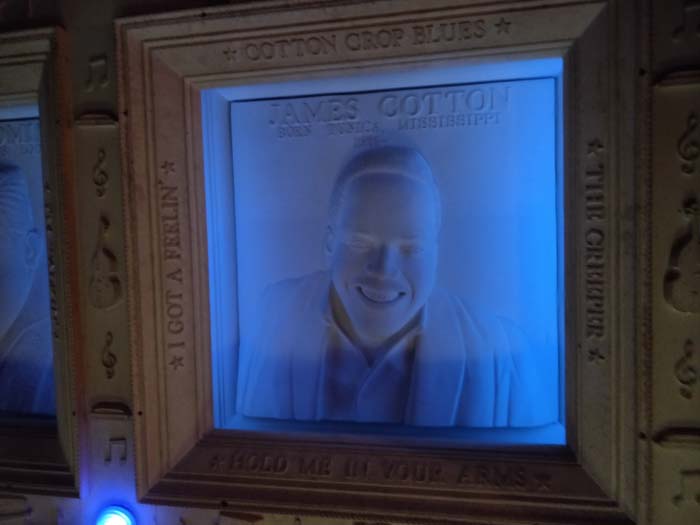 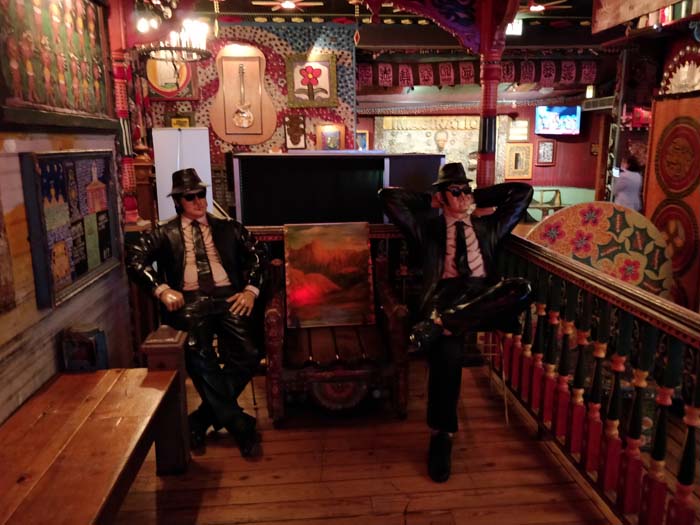 “Back to that same old place” *

It’s good music but not great. Unless it was outstanding, I’d decided beforehand to revisit an old haunt. It isn’t great, so it’s time to move on. I’m back at Blue Chicago, just gone 9 pm. The venue on N Clark St hasn’t changed externally since my last visit 6 years ago. The same can be said about the inside as well, as I enter after paying the $10 cover charge. That has changed, it was only $8 last time.

Onstage are the Mike Wheeler Band and they are going down well in the half-full club. All the seats at the bar are taken however so I choose a bar stool by the door, which has a good view of the stage. The music is good, very good in fact. There’s a much better atmosphere here than in the House of Blues as well. To close off the first of tonight’s three sets, Mike hands over lead vocals to Demetria Taylor. She delivers some great, soulful and powerful tunes. Watch a short clip of Demetria that night on YouTube. 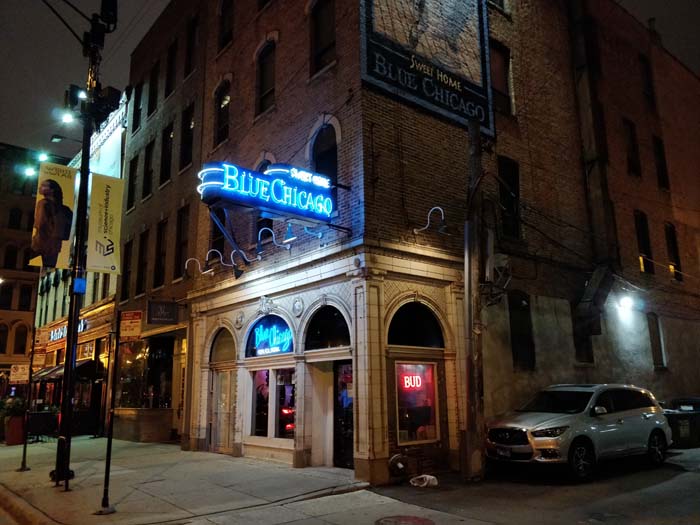 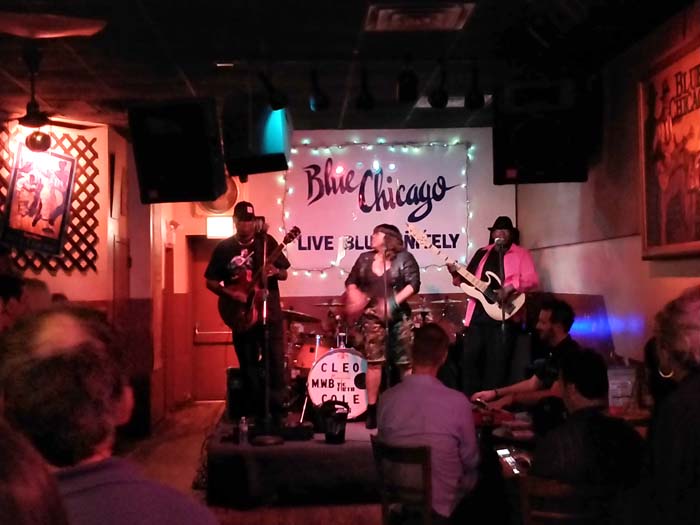 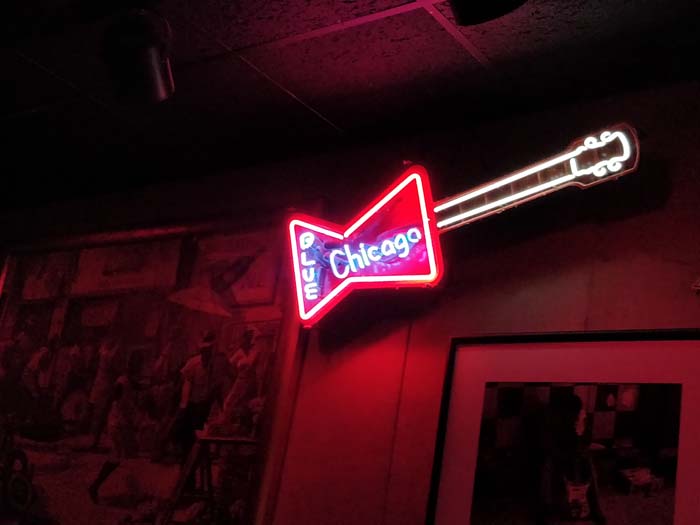 A seat has come free at the bar so I move across. The Blue Chicago t-shirt I bought on my last visit has, unsurprisingly, become a little faded by now. So I enquire of the barman what they’ve got these days. They still sell the t-shirt I have but unfortunately they have no stock at present and are awaiting a delivery. Oh well, never mind.

During the set break a guy sits down to my right and we start to chat. We talk about lots of things, and he’s OK, quite engaging and interesting. We don’t however exchange names and never got onto our personal lives, so I have no idea whether he’s local or why he’s at Blue Chicago tonight.

I stay for the second set. At the end of the break after that, my new chat friend wishes me well on my trip ahead. We start to watch the music again – it’s too loud to talk when the band is playing – and shortly after my friend gets up to dance. The club has filled up during the night – although people are coming and going all the time – and Mike and Demetria have been exhorting people to come and dance, which many do. Watch a clip of Mike and his band on YouTube.

I wait a while and see if my chat friend will return to the bar, but it seems not. I can’t see him on the dance floor either but decide it’s time to leave. The show goes on until 1.30 am but about 12.45 am – 6.45 am UK time – I figure I might have done enough to sleep through, even though I am actually feeling OK. So I depart without saying goodbye, which I’d have liked to have done.

The band and Demetria were great, bringing back memories of my two previous visits to Blue Chicago. The beer wasn’t too overpriced at $6 a pop, there was a great atmosphere and brilliant music. An excellent night all round.

I walk through almost deserted streets back to the hotel, reflecting that House of Blues was good but that Blue Chicago was way better. Back ‘home’, it’s lights out at 1.30 am.

** I Got The Blues by The Rolling Stones