The Journey Continues To Pismo Beach

You are here: Home1 / Route 662 / The Journey Continues To Pismo Beach

Back on the Pacific Coast Highway

Maybe there was some sub-conscious relief at ending my Route 66 journey but after getting up to use the bathroom at 7 am, I then sleep through until 9.30 am! There’s no rush today though. I have breakfast sitting on the balcony overlooking Santa Monica Beach and the Pacific Ocean. It’s a glorious sunny morning. What a pleasant way to start the day.

I check out just before noon and drive to the junction of Olympic Blvd and Lincoln Blvd, just for completeness. Why? This was the last official end of Rt 66. It’s just a road junction, pretty non-descript and I couldn’t see any signs recognising it’s place in automotive history. I am now truly done with Route 66.

The official end point of Route 66

On the road proper at 12.30 pm, back past the hotel on Ocean Avenue then a left down to the seafront – and onto Highway 1, the Pacific Coast Highway. My road trip this year now enters phase two, a journey north to see the 49ers play on Monday Night Football. Tonight I’m staying in Pismo Beach.

From Santa Monica and for most of the way to Malibu, there is heavy traffic on the road. There are clear blue skies and temperatures in the high 70s. It is of course the weekend so I guess many people are heading to the beach or just for a day out. The traffic does thin out later but there are always other cars on the road. When I did the PCH, the road was very quiet most days.

The glorious scenery brings back happy memories of that previous trip, it truly is quite stunning to see it again. After Malibu and then through Point Mugu Rock the road heads inland towards Oxnard and then I’m onto Highway 101. The PCH merges with Hwy 101 for the next few miles. I weighed up going the whole way to Pismo Beach on the PCH but decided to use Hwy 101 for a quicker journey time. Plus, my current plan is that I’ll be back on the PCH next year in 2020.

Just after Ventura, there is a short section of the PCH that runs right by the shoreline. I remembered it from the previous trip so I take a quick detour off Hwy 101 to re-visit. It’s just under 5 miles long but a nice diversion, before I have to re-join Hwy 101.

Nearing Santa Barbara I come off Hwy 101 to find a gas station, plus a rest room. I find the former, but not the latter. After driving around for 15 minutes I discover none of the gas stations have rest rooms. I even tried in a CVS Pharmacy but their rest room was out of order!

I figure I need to get back on the road and when out of the city stop at a turn out and discretely go behind a large tree or bush! A few miles on however, there’s a sign on Hwy 101 saying there’s a rest area ahead. Thank f*** for that, there will be toilets there. 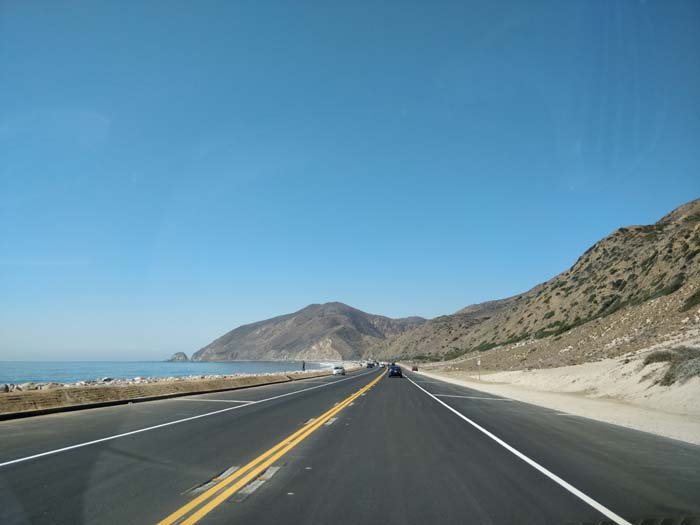 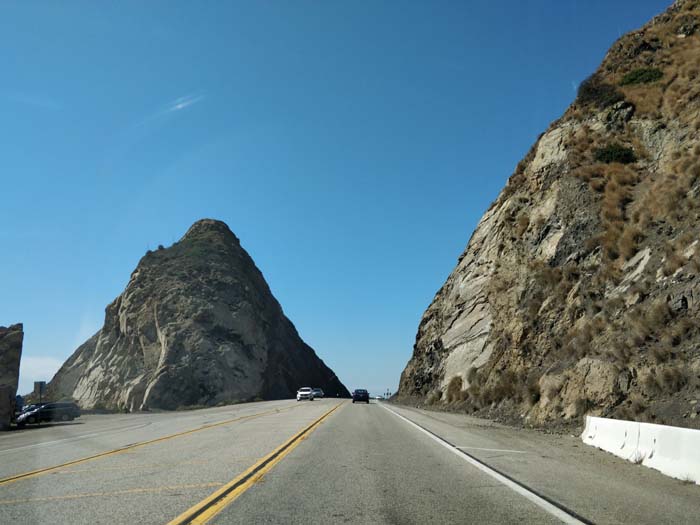 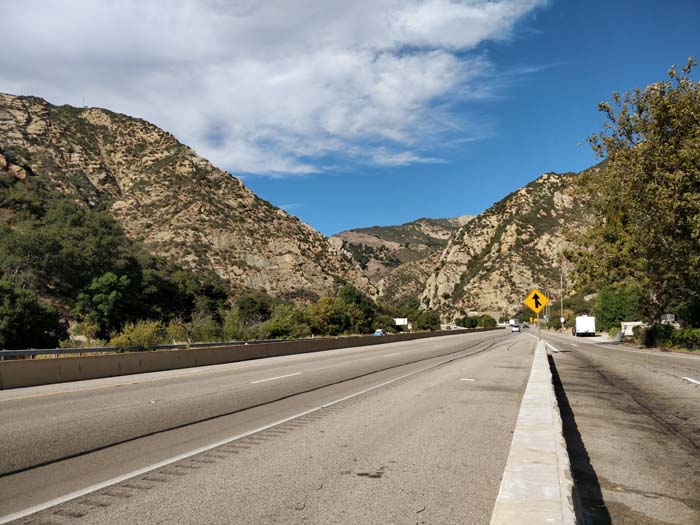 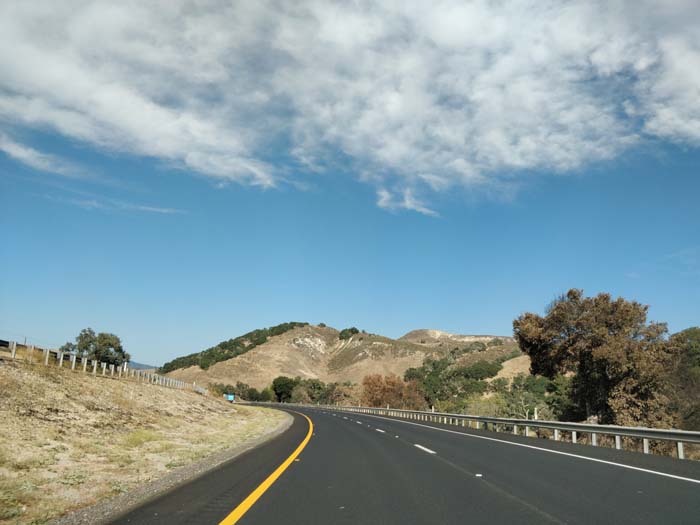 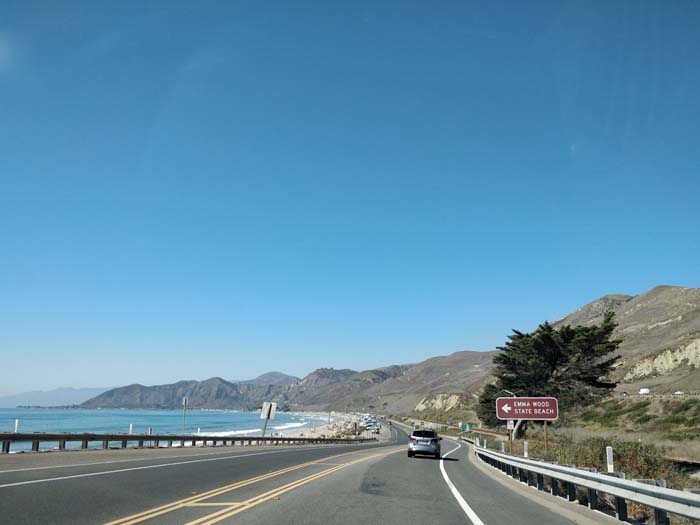 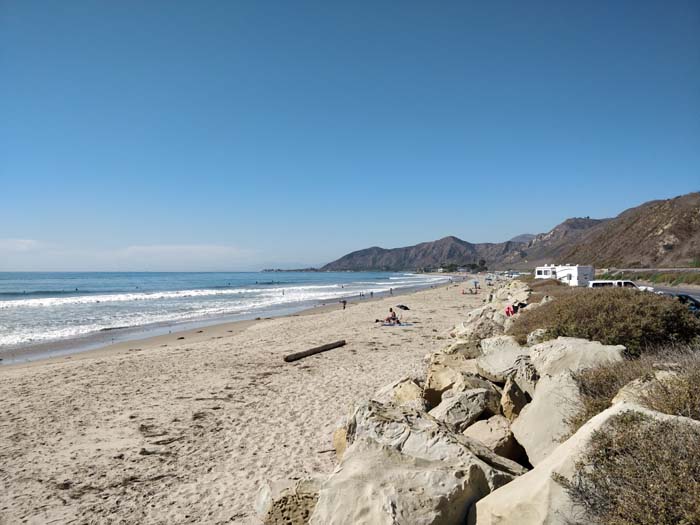 Another 100 miles on, and my destination is nigh. Pismo Beach is right by Hwy 101, and it’s only a mile off the highway into the town. I drove through Pismo Beach on the PCH trip and thought it looked like a cool little town. Back then I saw loads of surf shops and other interesting stuff, and so made a note to stay there one day. I find the SeaVenture Beach Hotel and check in. It’s another ocean front room with a sea view. 🙂 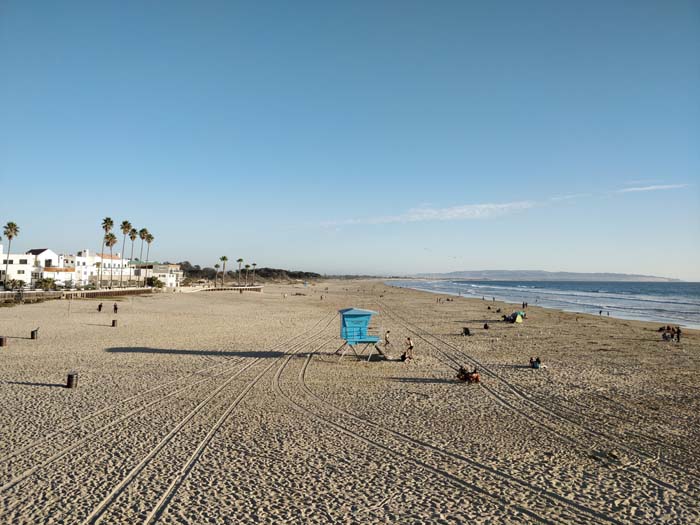 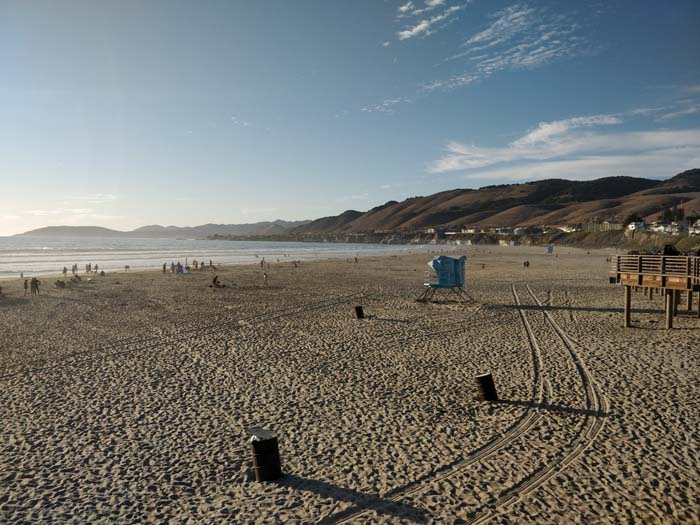 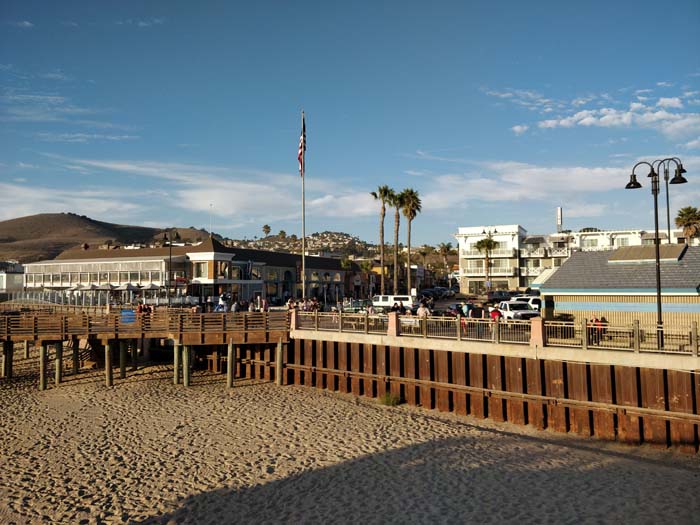 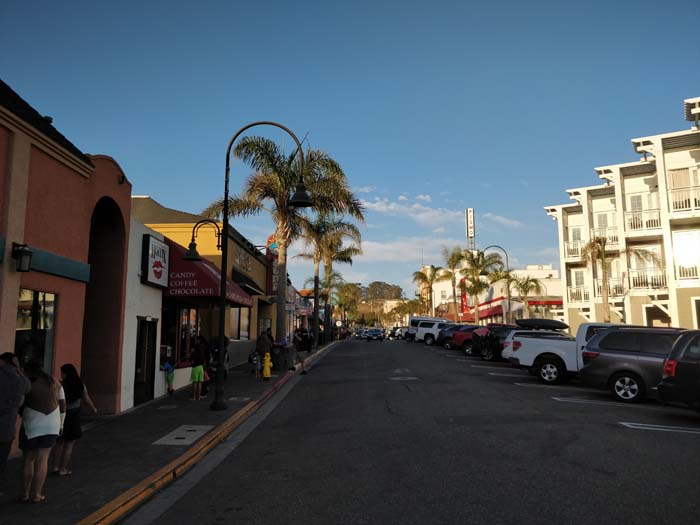 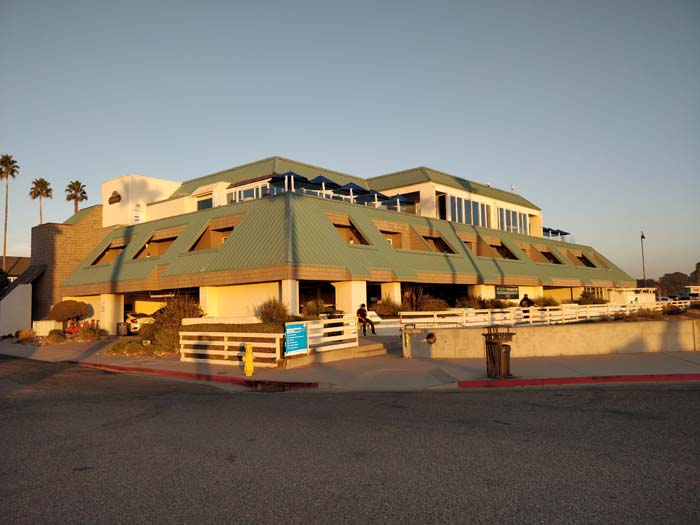 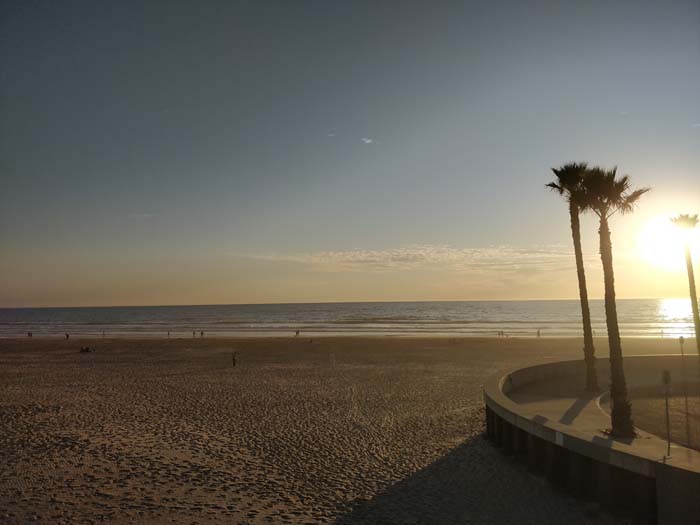 I go back out for gas and breakfast, then drive into the town centre to have a walk around. I also look into my dinner options. There was a bar that had live music but the hotel receptionist was certain they did not serve food. On my walk I ask at the entrance door and they do not. The hotel recommended a place called Wooly’s so I look at the menu outside, and it seems fine. Sorted then.

I’m not interested in all the tat shops lining the main street but Pismo Beach is a great little town, well worth a visit or stay. Back at the hotel I watch a reasonable sunset down on the beach – a bit of cloud obscured some of it. Around 8 pm I walk over to Wooly’s. There is as usual a large and obscure beer selection to be negotiated first. I can’t remember the name of what I drank but after a few samples I found a couple that were good. 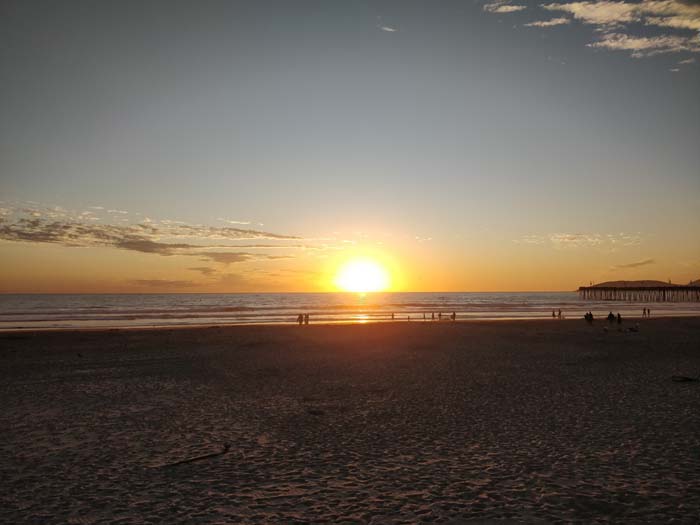 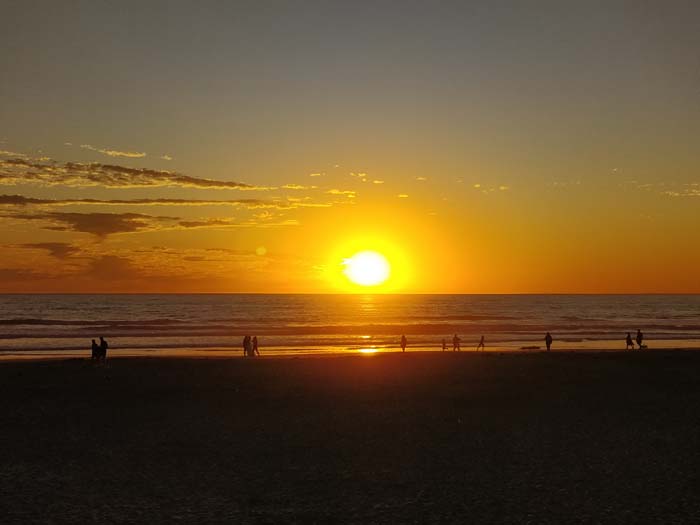 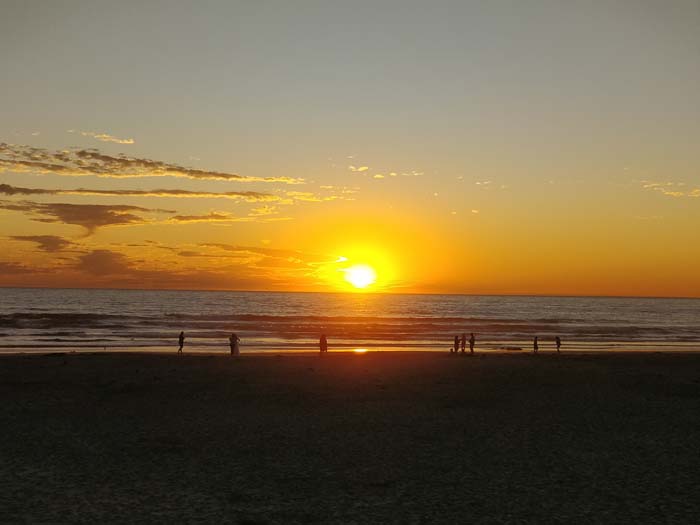 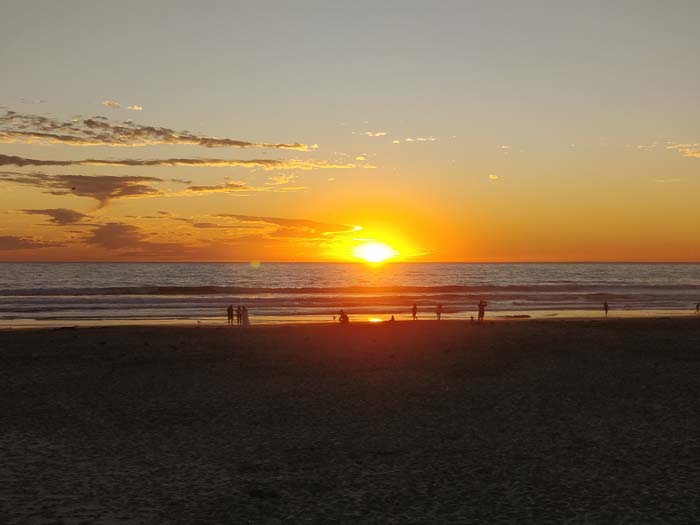 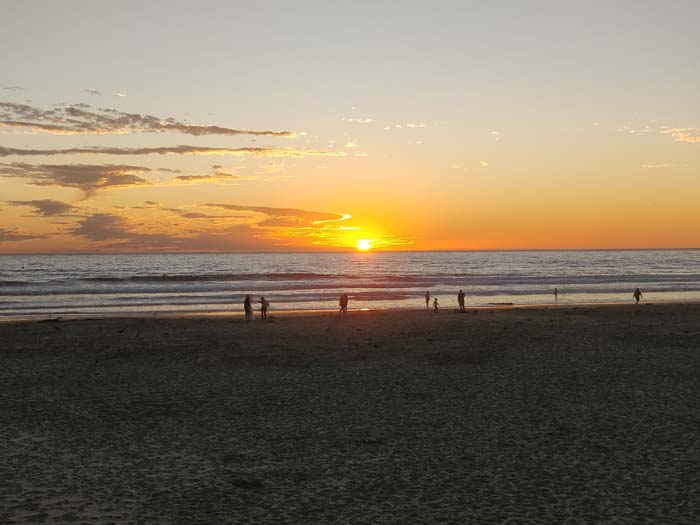 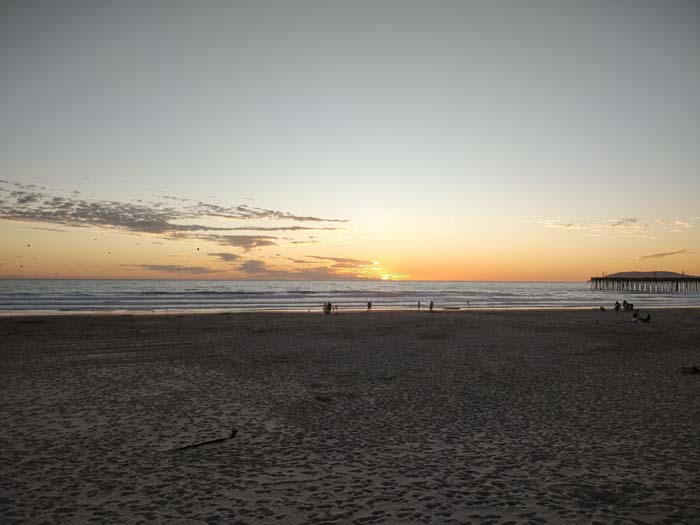 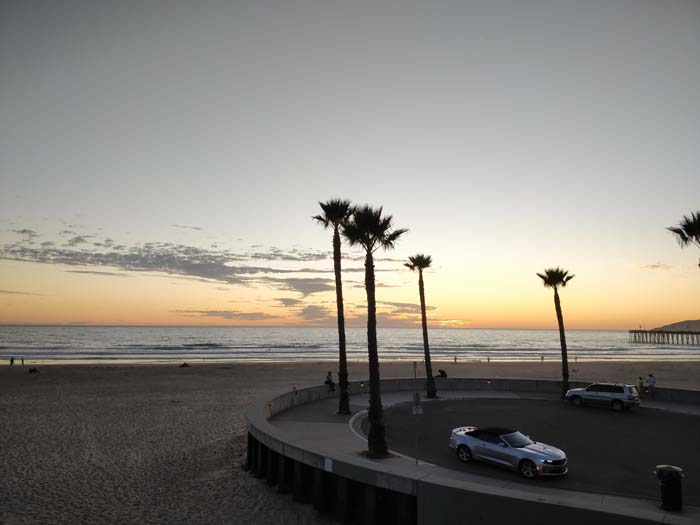 I hadn’t had wings in ages so I order some of those after starting with a cup of very good clam chowder. The coating on the wings is Frank’s Red Hot and, frankly, they are too hot. The meat is good but they are just too spicy. Dinner completed, I check out and walk up the street to Harry’s Nightclub & Beach Bar. The place is absolutely packed out with people. There was a band playing at 6 pm earlier when I enquired about food and, I assume, it’s another band now rocking out the tunes.

Harry’s For Some Music

Said band are called Rock of Ages. The dance floor is full as I walk by it, seeking a seat at the bar, which I eventually find. There was no chat at Wooly’s, the bar area was almost deserted as most people sat outside at tables in the warm evening weather. Walking to Harry’s however I noticed it was getting noticeably cooler due to the sea breeze.

There’s no chat in Harry’s either for now, so I mainly watch baseball and listen to the band in the background. And they are not bad either. The singer is almost an AC/DC clone type of guy. Songs included Sweet Child O’ Mine, Walk This Way and Dream On by Aerosmith and Def Leppard’s Pour Some Sugar On Me. Harry’s bar is a right old melting pot of people: young, old, the weird and the wonderful. You can watch Rock of Ages play Sweet Child O’ Mine on YouTube.

One noticeable aspect on this trip – or maybe it’s just the places I inhabit – is that people these days are sporting tattoos everywhere, on every conceivable bit of flesh. They then mostly wear – or not – clothes that highlight them. Neck, fingers, thighs, arms… everywhere. I also noticed a plethora of tattoo parlours in almost every town. What’s with this? Dunno, but I won’t be joining the party.

Later on I go to the rest room having left a full beer glass on the bar by my stool, my spectacles case open next to the glass, and then placed my sweater on the stool. When I come back I discover that some dickhead has put my sweater on the bar and sat on my seat. “Excuse me,” I say, “I’m sitting here.” His mate to my left mutters something like “Oh, he was talking to some woman sitting here.” To which I reply, “I’ve been sitting here for the past two hours.” Dickhead thankfully gets up off the seat without a fuss. They both leave about 10 minutes later.

Another guy and his mate sit down there soon after. Not long after that some very drunk middle-aged guy about three stools to my left is trying to speak to me: “Let me buy you a drink.” I didn’t hear him at first but the guy to my immediate left brings this to my attention. No idea who the drunk is but I gratefully accept a Maker’s Mark.

I now start to chat to this guy to my left. He’s on a 50th birthday road trip with his mate, visiting places he’s never been to before. I give him a few more ideas based on my travels…

Only afterwards do I wonder how that came across. I hope he didn’t construe it as “Nice trip, but you could do better…”, which was not my intention. Anyway, he’s good company for half an hour or so before I take my leave and depart. I did think of buying the drunk guy a beer back but when 50th guy and I discussed doing that, he’d disappeared. Just before I leave though, the drunk re-appears. He sat down in his seat, closed his eyes, and started swaying wildly, looking as if he was about to throw up. I decided against buying him another drink…

It was great to drive the PCH again, Hwy 101 had some quite reasonable scenery on the journey and it was a good fast drive. It was a reasonably good night in town as well. My final overnight stop beckons tomorrow.