The Other Springfield On Route 66

I get a reasonable night’s sleep and I’m driving off at 9 am – for breakfast. A guide book recommended Shelly’s diner, just down the road, for breakfast. I figured, correctly, that the motel would not have a room fridge. Nor as it happens did they have any ice machines either. So a 7-11 breakfast would not have been possible here anyway.

Shelly’s is a typical roadside diner, lovingly restored a few years ago by the owner, Shelly. There are no airs or pretences here. I could order cereal and milk but opt for a classic of eggs sunny-side up, turkey bacon and toast, plus tea. A large glass of orange juice gets me started. It’s all good. I debated with Shelly whether I’d have an English muffin but after the eggs and bacon I’ve had enough to eat for now.

Back at the motel, I pack up. At reception, named Connie’s Shoppe, I drop off the key and also meet Connie, the owner. I drive out of the motel and back onto Rt 66 at 10.15 am, heading for the other Springfield on Rt 66. In Cuba’s downtown I pass, and pull over to admire, the wall murals the town is renowned for. 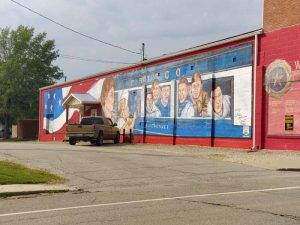 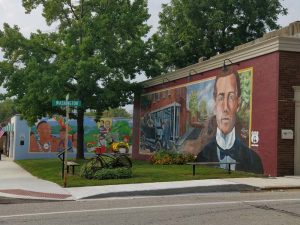 Two of the numerous wall murals in downtown Cuba

A few miles down the road is Fanning where ‘sits’ what was the World’s Largest Rocking Chair from 2008 to 2015. It is located outside the Fanning Outpost General Store. Another Rt 66 oddity. And yes, it is large. It has now been renamed the Route 66 Rocker.

I decide to browse inside the Store, expecting a little shack or similar. Inside however, it’s huge and just goes on and on at the back of the Store. Once I get past all the Rt 66 tourist tat in the front of the Store, I come across rows of kitchen appliances and all manner of other goods. Further down I can make a bunch of garden supplies as well. A general store indeed.

All of the classic original white heart-shaped Rt 66 signs are gone from the roadsides these days. I’ve seen plenty painted onto buildings as I drive along, leveraging the road’s heritage – but I won’t see an original sign. So I decide to buy a mini-replica for a wall back home. Not sure now which wall, but I’ll find space.

On the road again it’s more of the same wild mixture of roads, driving and iconic Rt 66 roadside fixtures, such as Devil’s Elbow Bridge and the Munger Moss Motel. There is however a massive irritation between these two places when the app takes me on a detour to near the closed Gasconade River Bridge, followed by then doubling me back to a junction on I-44, and then onto it. I come off the Interstate at the next exit! 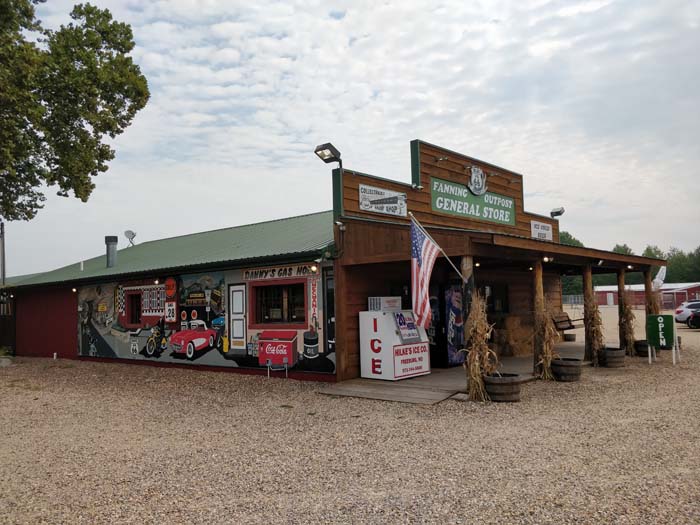 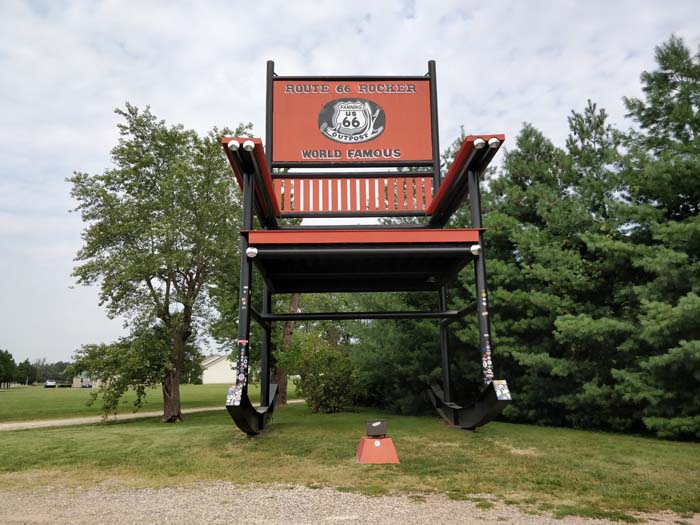 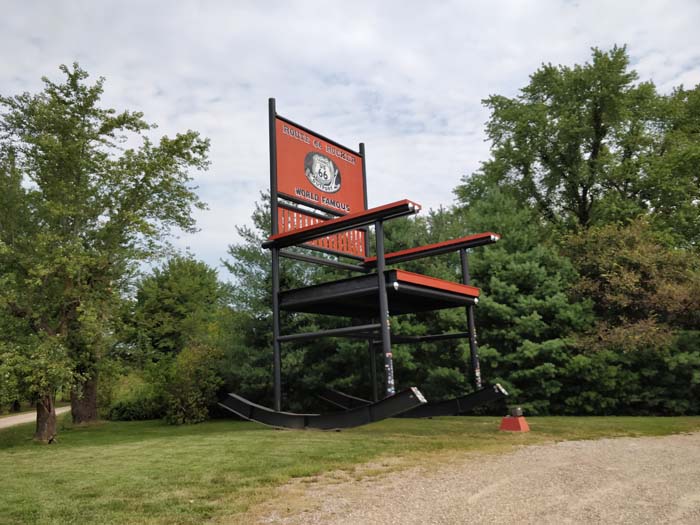 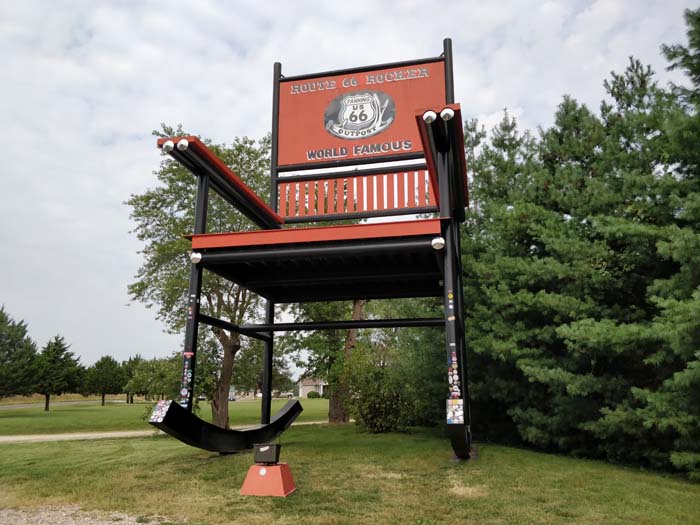 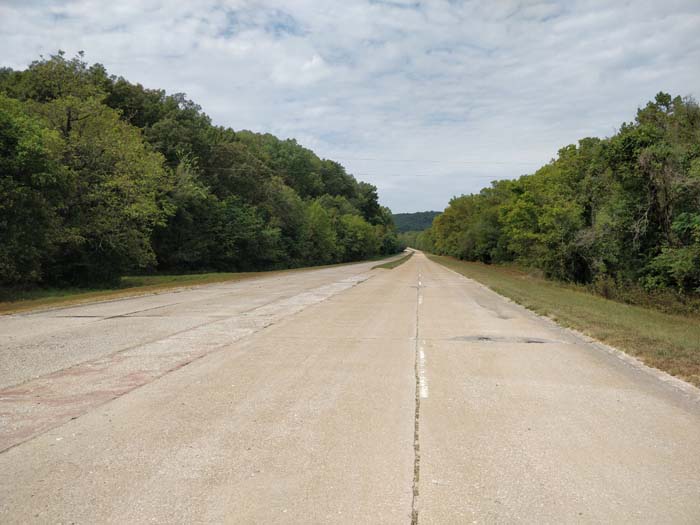 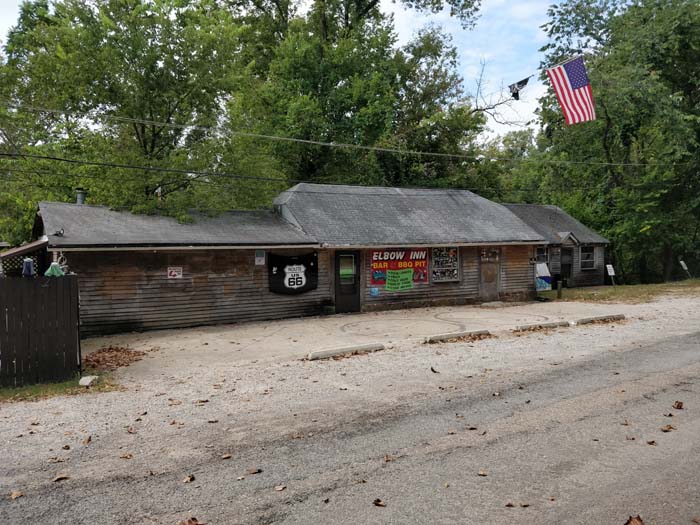 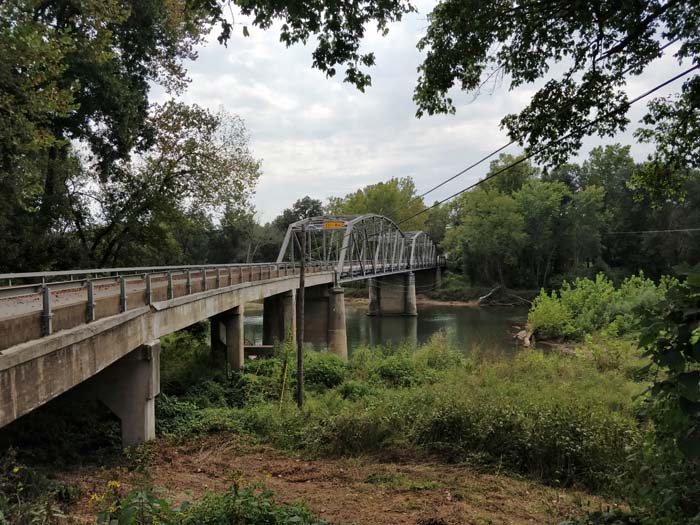 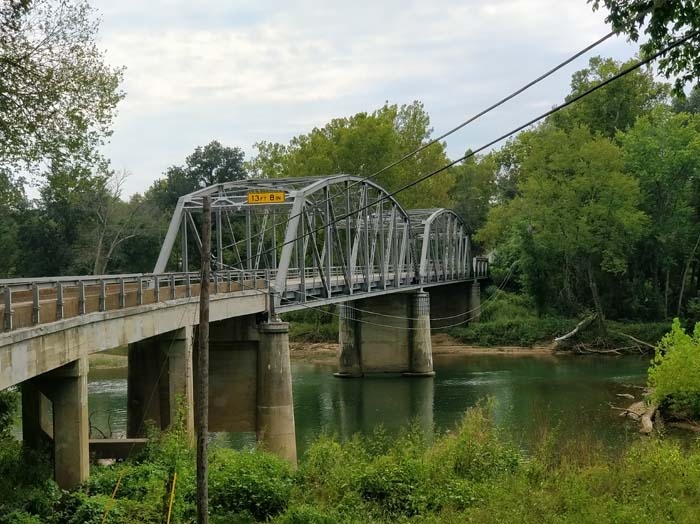 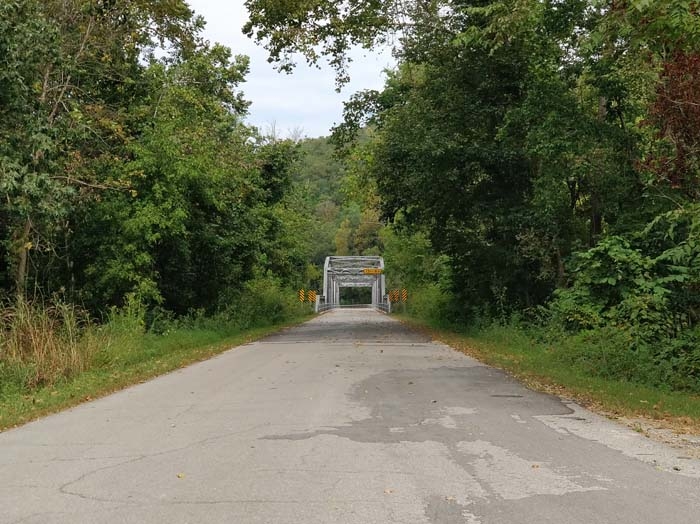 First the app should not have diverted me because I didn’t explicitly state I wanted to see the Bridge, albeit it was on Rt 66. Well, not quite. The original Bridge is closed due to being unsafe now but Rt 66 did use to traverse it. Second, I’m convinced I could have continued along the road I was on without going on I-44. I later verify this on Google Maps. A new Gasconade River Bridge has recently opened that means you can now stay on old 66 uninterrupted. From this new bridge you can look down at the old one. Approaching, the app should then have indicated the old Bridge was a (short) side trip to be taken if desired, and carried straight on using the frontage road it diverted me off. What a waste of time and mileage.

Whatever, it was a minor blip on another great day. The weather started out bright and sunny but has now clouded over as I head nearer to Springfield, MO. Earlier I was making sufficiently good progress that I stopped for lunch at Wrinks Food Market in Lebanon, just across from the Munger Moss Motel, for a roast beef sandwich from their in-house deli of. Very nice it was too. I ate it in their inside seating area.

Strangely this place is yet again not flagged by the app as a POI. Further on down the road after lunch I stop to visit the Route 66 Museum, also in Lebanon. In there, Wrinks is highlighted as a Rt 66 icon and there’s a write-up about it in a display cabinet. Go figure. The Museum is a small affair but well done and as usual I learn more snippets about Rt 66’s history and legacy. 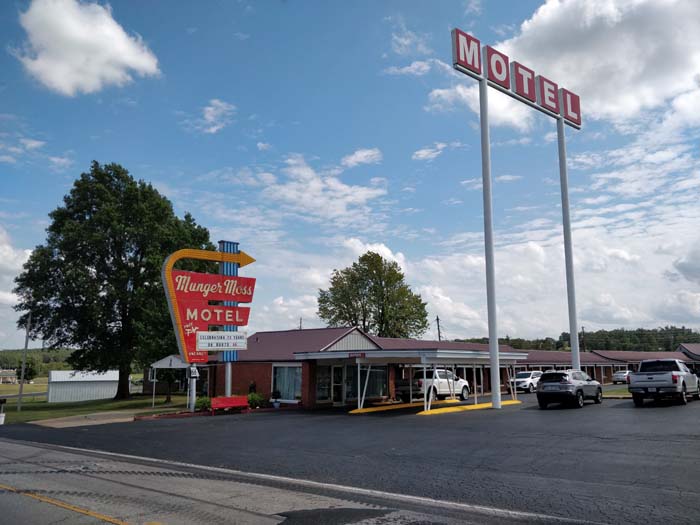 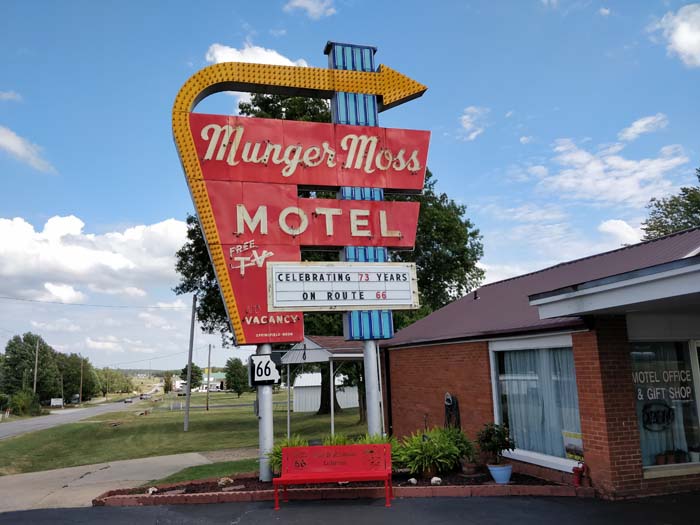 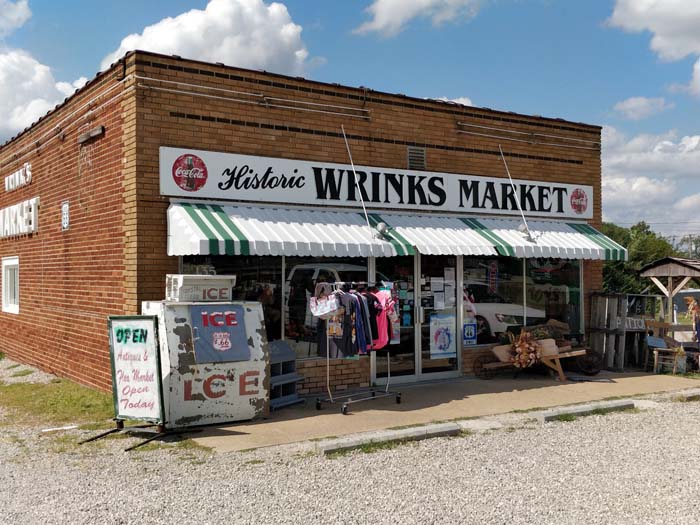 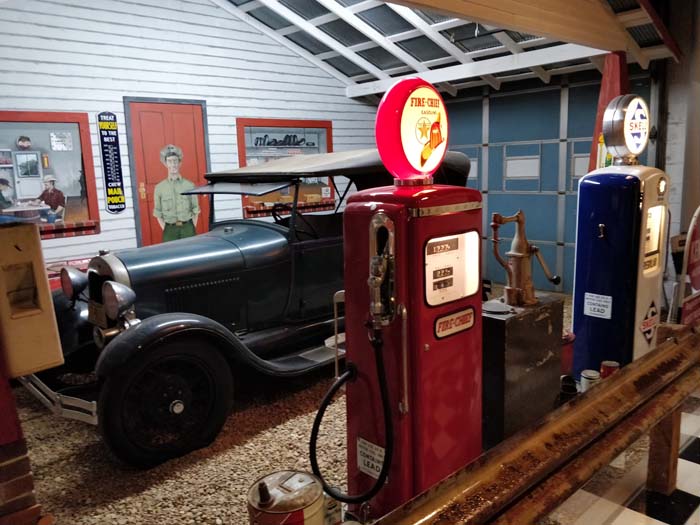 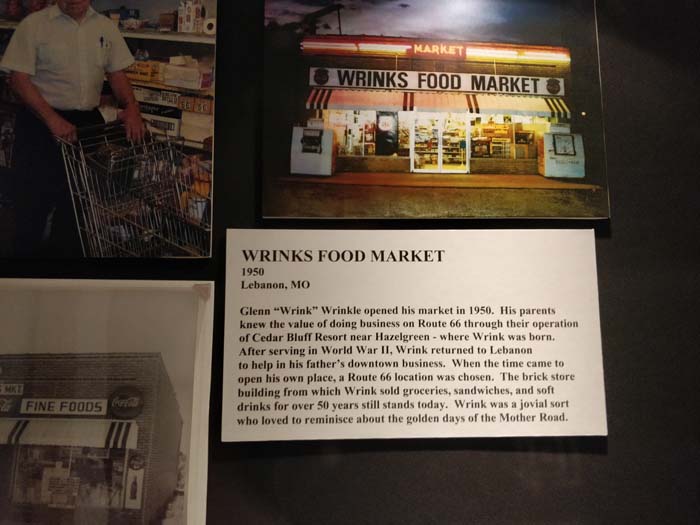 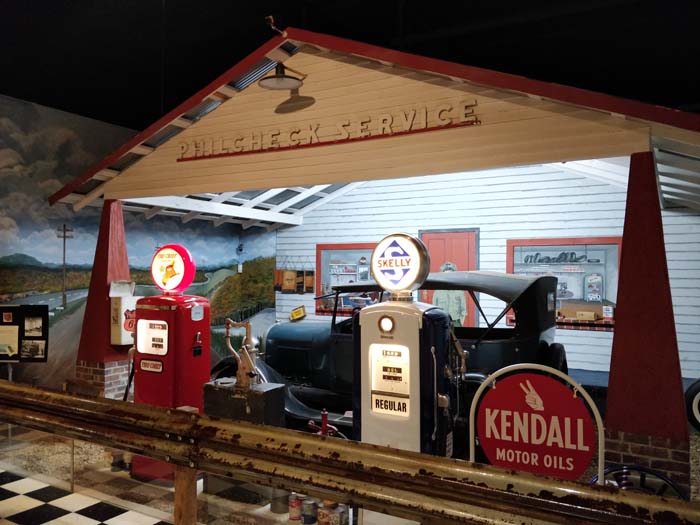 Despite the cloudy skies and some rain, the temperature remains in the high 80s through the afternoon. It was even hotter earlier. On the way into Springfield MO about the only industry on view are fields, or rather ‘parking lots’, full of truck trailers. There are 1000s of them, all neatly lined up. Springfield must be trailer-central for trucking. This Springfield also seems to be a much bigger city than the Illinois one.

The app directs me to the Route 66 Rail Haven Motel. Or rather it tries to, as I first drive past the Motel and then it takes me into a suburban cul-de-sac behind the motel. So I kill the app and re-trace my steps and eventually find the proper entrance. I then search in vain for a few minutes to discover where reception is located. I spot it eventually as I see folks coming and going into a small building. A sign saying ‘Reception’ would have been useful. 🙂

Once inside I’m told my room is not ready yet despite it being past check-in time. They promise to call me when it’s ready, the manager saying it should be about another 10 minutes. In fact it’s nearly 30 before I get a call. I fill the time by sorting a few admin things out whilst sitting in the car and then cruise up the road the hotel is on. There was nothing coming up pre-trip that was a possibility for dinner locally, and my drive confirms this.

Elvis Has Left The Building

Back at the hotel and the wait for the room was worth it. I’m in Room 409, the Elvis Suite. Oh my gosh, what a sight! Elvis Presley stayed in this very room in 1956 when he played a concert in town. A few years later the hotel turned the room into a shrine to Elvis, as well as being a bedroom. It’s wild, brilliant, kitschy, and I love it! See the photos. Needless to say you need to book the room months in advance. 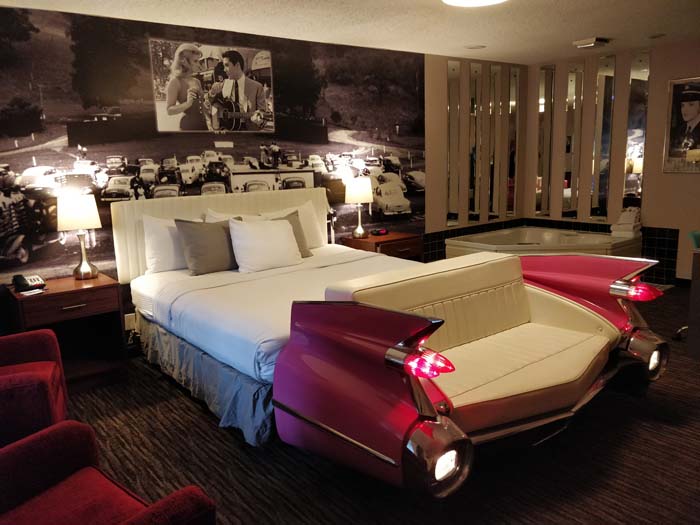 Around 7.45 pm I order a Lyft to take me to the Springfield Brewing Company for dinner in downtown Springfield. My driver Charles must be pushing 65 and frankly should be banned from driving. First he nearly kills both of us by pulling out of a side street without stopping or looking, only to slam the brakes on at the last second when he realises there’s a car coming straight at us. 30 seconds later he does pull out but in a completely unsafe manner as there is another car bearing down on us. How this second car didn’t smash into us I have no idea, they must have had to brake very hard to avoid us. Thankfully the rest of the journey is without incident.

The Brewing Company is a micro-brewery also serving food. It’s very popular and very full. There are no free seats at the bar but there is an open space. I ask a bar lady if I can sit there, just checking it’s not a space for servers. “Sure” she replies. So I find a free bar stool elsewhere and bring it back.

Chrystal, for that is her name, says to me, “Oh thank you. It really annoys me when people take the bar stools away from the bar.” I might have made a friend… She however is run off her feet all night and we don’t engage in any chat, simply because she hasn’t got time. She does however keep looking after me by regularly feeding me beer and food. 🙂

Her shift ends before I leave and as she’s going she says, “Nice to have met you!” She had a very good service manner and a bubbly personality. Nice lady. During the evening I eat some wings and try the local brews, made in-house. All is very good. So there’s no chat at the bar but I do get to do some diary catch-up later.

Nearing 11 pm I cash up and order another Lyft. Brandon duly appears and 10 minutes later drops me right outside the Elvis Suite back at the motel. Inside I sit on the sofa, by the tail fins of the ‘car’, looking around and musing about the bizarre setting I’m in, and reflecting on another superb day. Onward tomorrow to Tulsa. 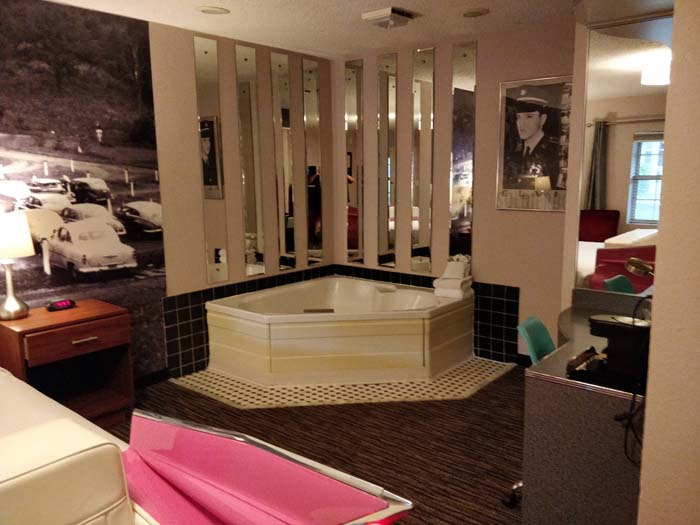 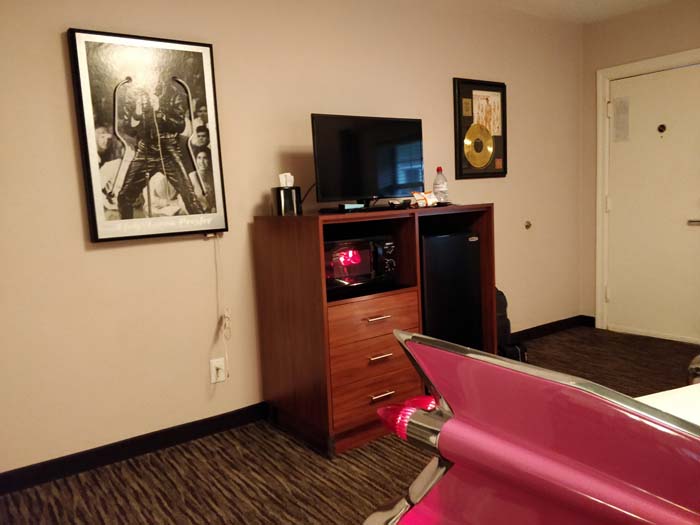 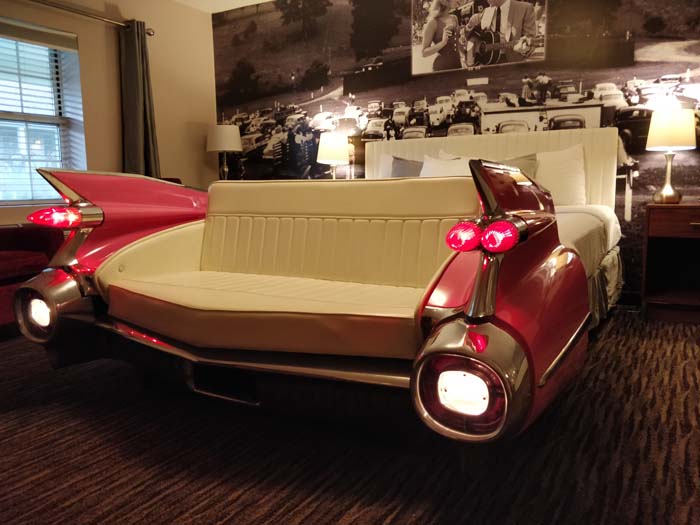 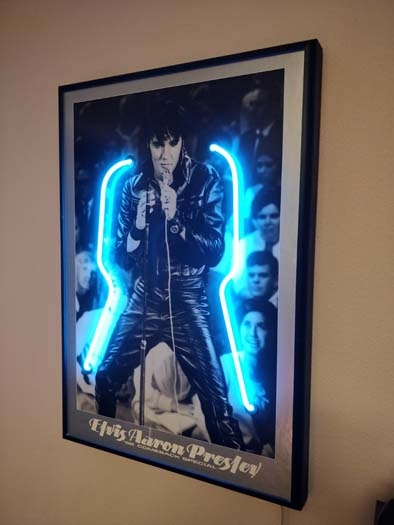 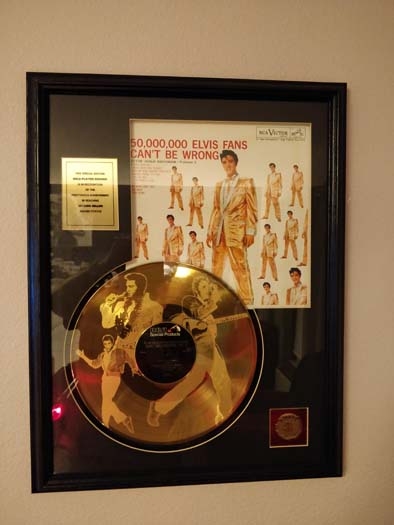 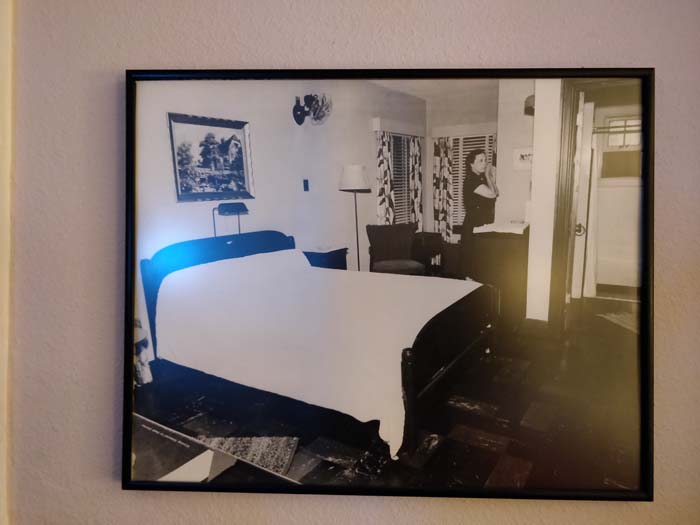