I leave the hotel around 10.30 am to catch the VTA Light Rail to Levi’s Stadium from the stop right outside the hotel. The train is not that full but it’s mostly 49er fans. The weather is glorious again with a forecast to remain so for the day. On arrival at the stadium I wander around the tailgate parties in the parking lot, something I didn’t have time for last year. There’s loads of BBQs, beer, games of catch and an excellent atmosphere despite the 49er’s awful performances so far this season. It appears everyone’s hopeful for an upturn in fortunes, hopefully against today’s opponents, the Tampa Bay Buccaneers. 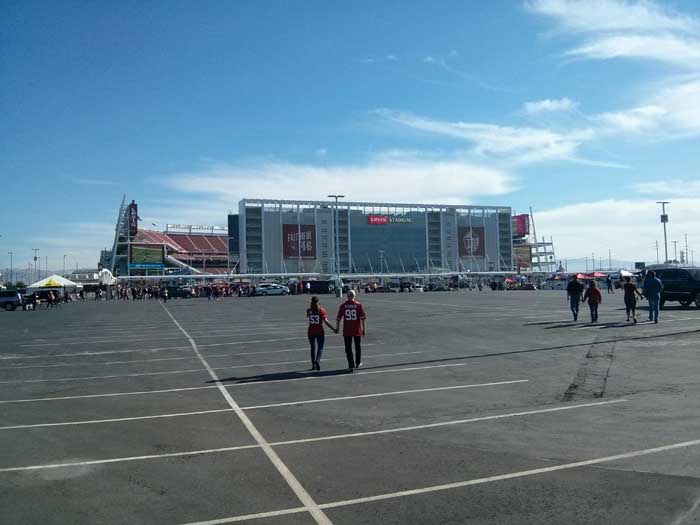 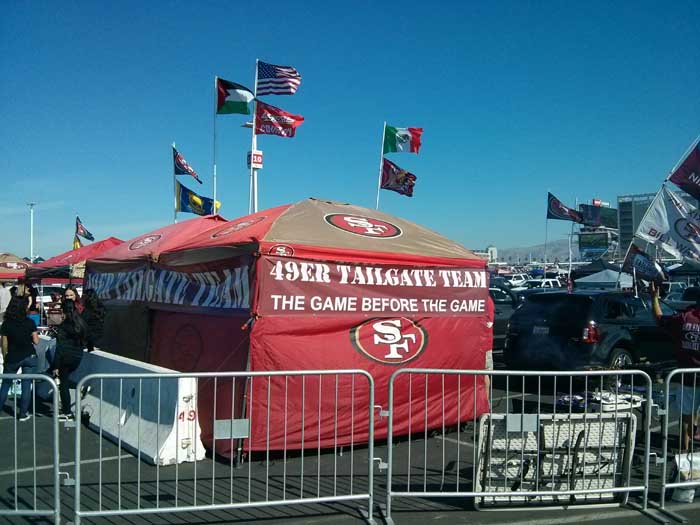 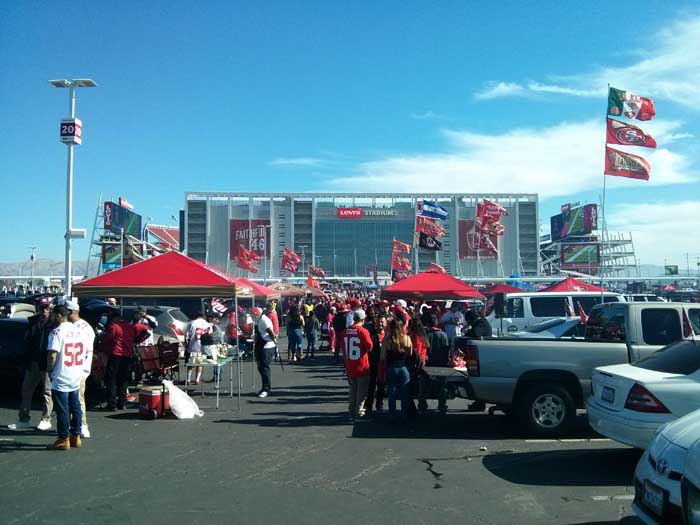 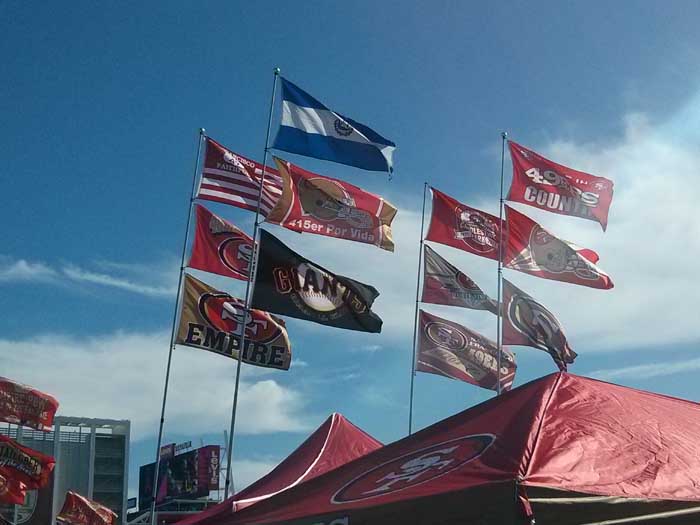 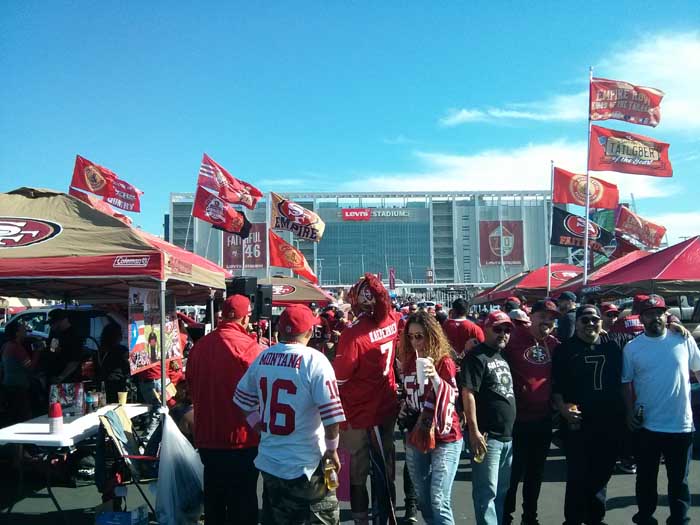 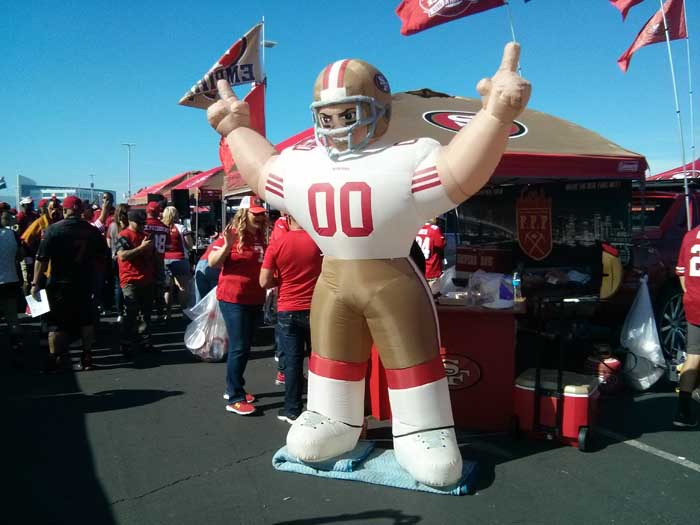 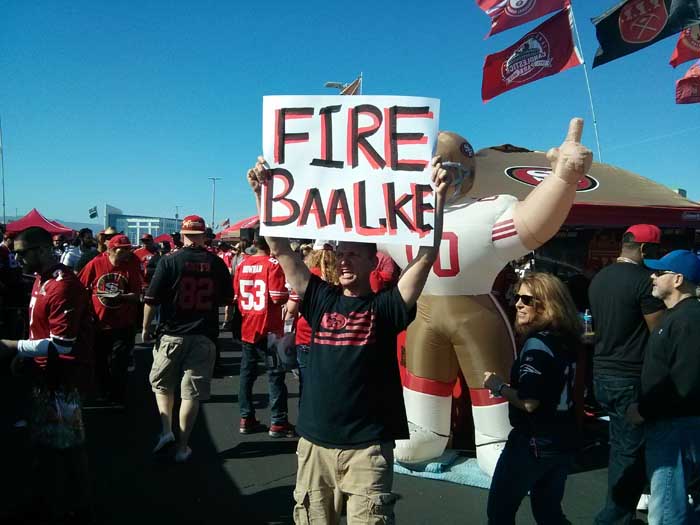 Kick-off approaches so I get through security and into the United Club. I go into the stadium to find my seat and it’s brilliant, as I’d hoped. I’m right behind the 49ers sideline, almost on the halfway line, and about 11 rows up from the pitch. Definitely worth the dosh. I go back inside for a hot dog and beer, it’s a bit early but it’s a 1 pm kick-off so need to be fed and watered by then.

Just before kick-off, we all stand for the national anthem – apart from Colin Kapernick of course, who’s protesting this season – followed by a flyover by some military planes, a few fireworks, then we’re in play. Sadly the 49ers are as bad as they’ve been all year, there’s very little to cheer and not a lot of noise in a half-empty stadium. I stay until the bitter end, a 43-17 loss to the Buccaneers, hanging around in the Club for a bit to let the crowds disperse. I leave and walk around the Team Store just to browse but like last year there’s nothing to tempt me. The shop though is doing an extremely brisk trade – it’s heaving with people. I depart for the station and there are no queues again this year and a train arrives very quickly to get me back downtown 40 minutes later. 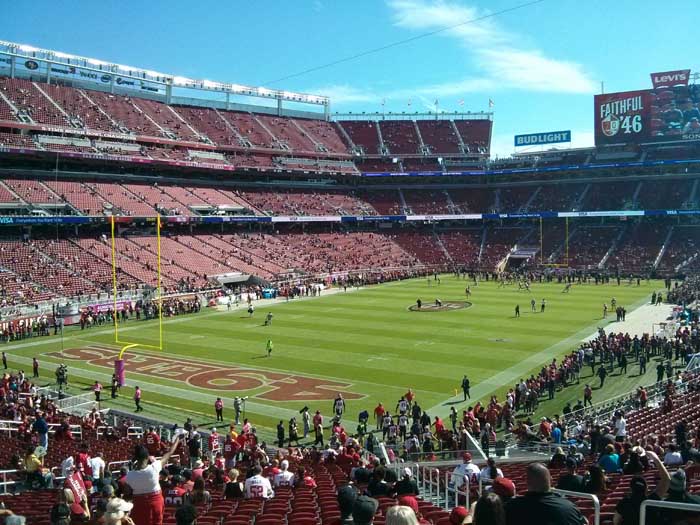 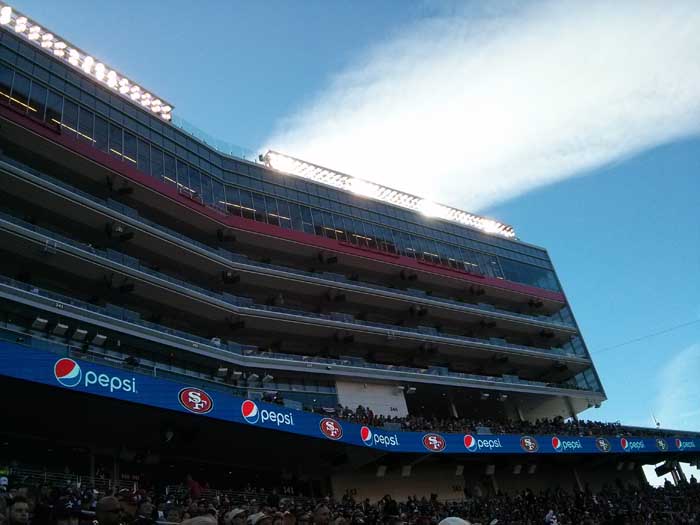 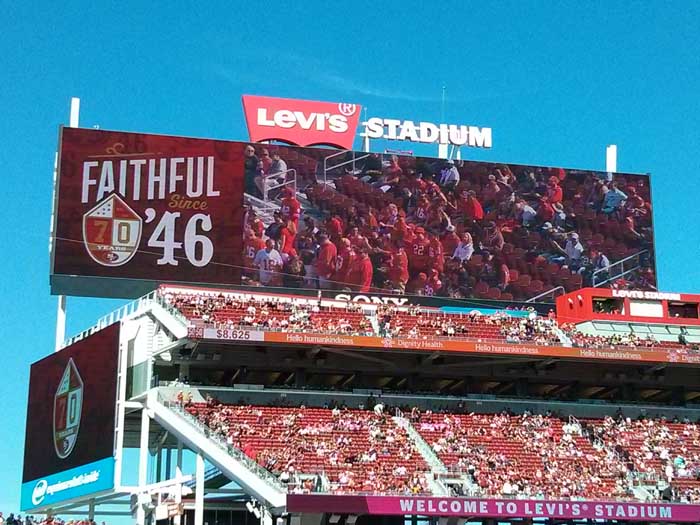 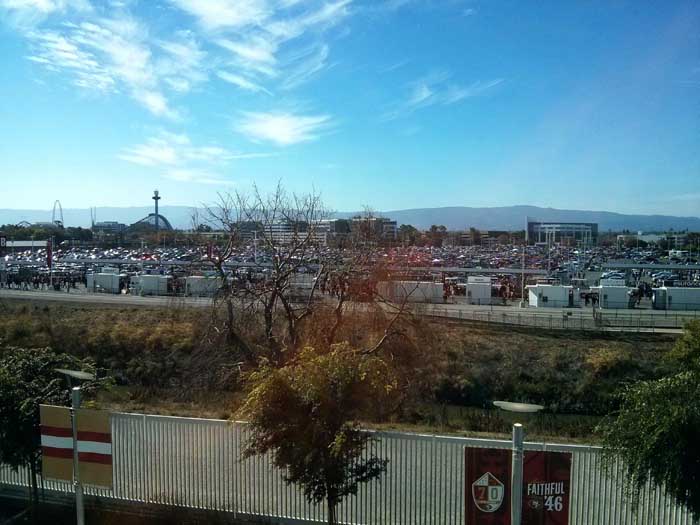 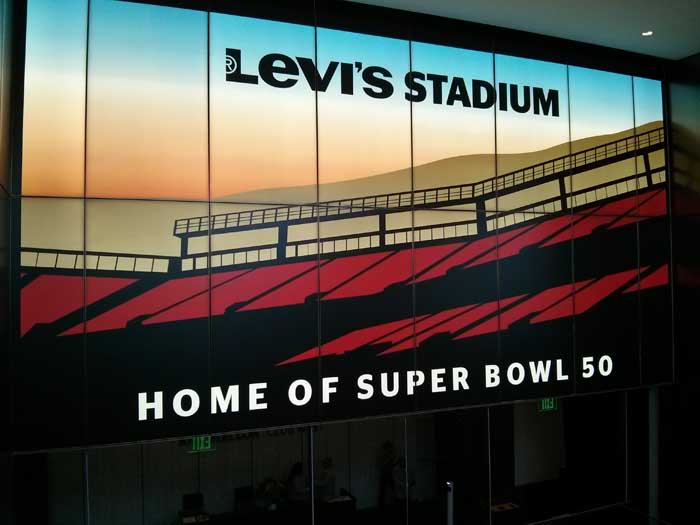 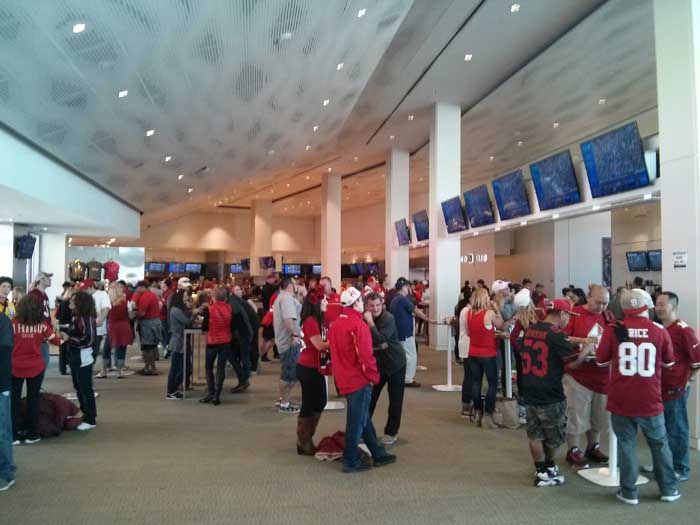 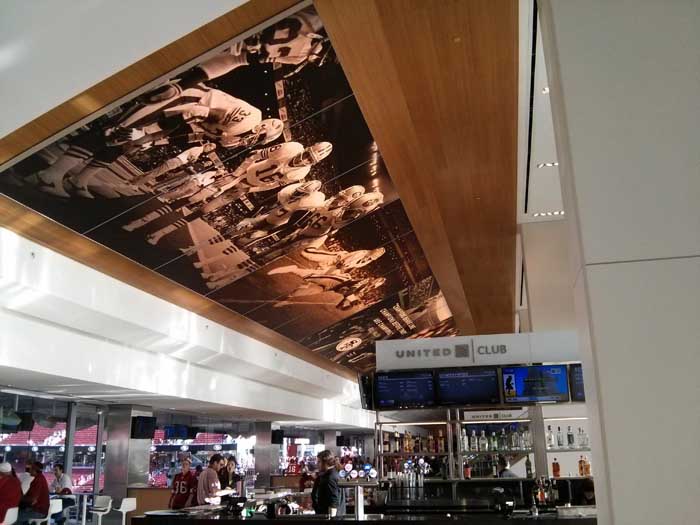 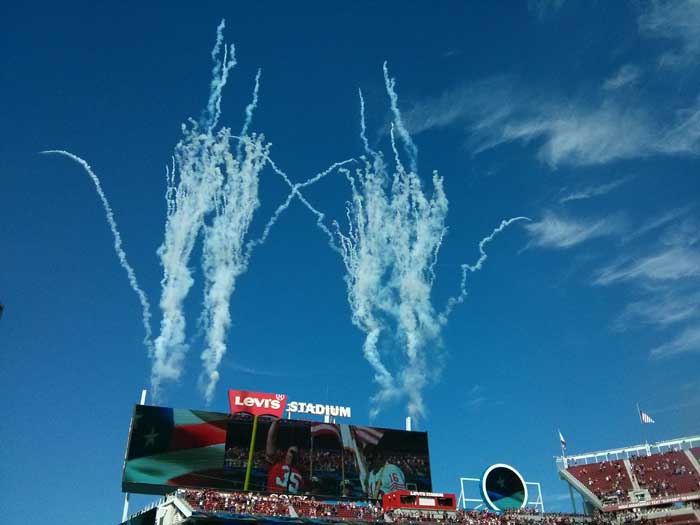 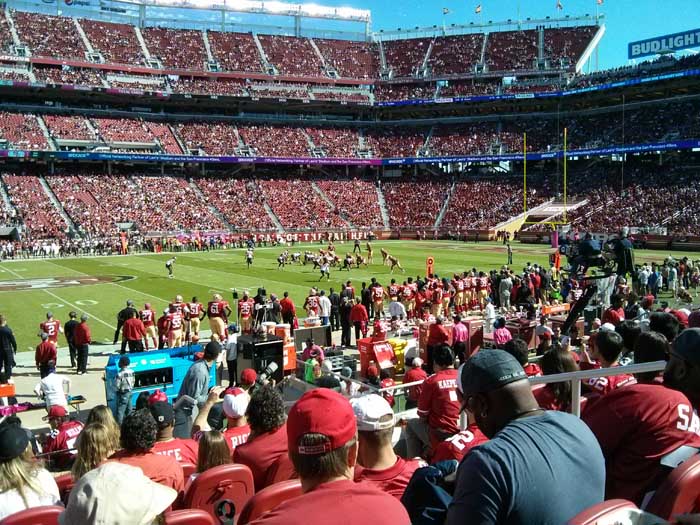 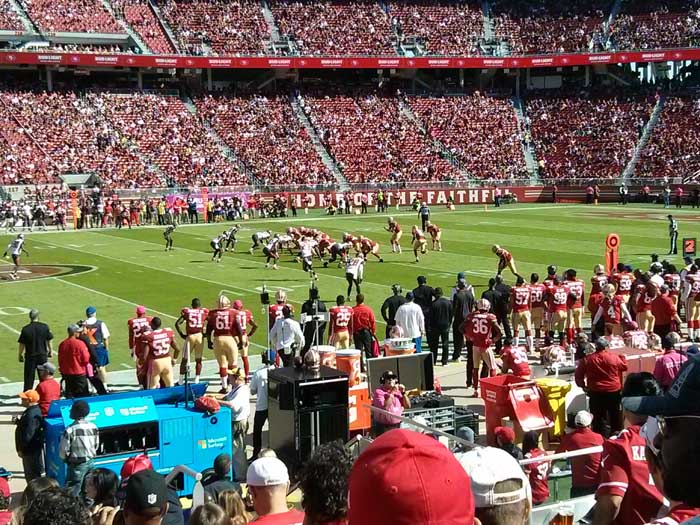 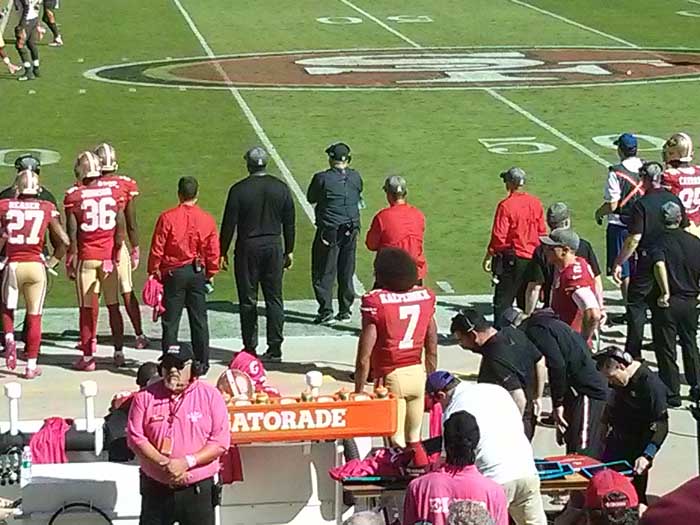 Back in my room I search the web for somewhere to eat tonight and settle on Original Gravity just up First Street. It serves a range of craft beers plus many different types of sausages for food, so worth a try I think. Sunday Night Football in on the TV when I arrive and I grab the last seat at the bar. Yet again though there’s no bar talks per se, as everyone is watching the game. There just a few comments between us every now and again, but nothing sustained.

The game, Arizona Cardinals vs Seattle Seahawks, however is absolutely dire. Until the last 5 minutes of overtime that is, when it has the most bizarre finish I think I’ve ever seen to a game with both sides missing easy field goals. The game ends in a 6-6 draw and there’s a few more comments between everyone. Disappointing game and company, as was the food and beer. Despite 20-plus beers on offer, and tasting quite a few samples, I didn’t like any of them that much. No real depth of flavour to the pints I had. And the trend for craft beer in the US to add all sorts of weird flavours has really got out of hand. There’s beer flavoured with chocolate, plums, chilli, coffee… you name it, they had it. Years ago I had flavoured beers in Belgium and found them disgusting. Please, brewers, stop this. Plus the other bad trend is for ever higher alcohol content. There were plenty of the 20+ beers over 8% ABV and some higher than 10%. STOP IT! And the sausage I had was terrible. It had a very tough casing that was inedible, the filling inside was bland and tasteless, and it was really, really poor. The fries were OK. None of the servers asked me if my food was OK, even when they cleared away my half-full plate. So I won’t be coming back here again, and can’t recommend the place I’m afraid.

Annoyed In The Bar

After enough bad beer for one night I decide to go back to the hotel for a nightcap in the bar on my last night. There are not many people in the bar – Sunday night at 9.30 pm – and I sit on a sofa away from the bar. There are however a small group of people being excessively noisy at the bar, to the extent that after 20 minutes of raucous noise I complain to a waiter. One of the issues was that they were watching some reality show on TV. The TV’s sound was turned up very loud and they were all commenting and shouting at the show, making matters worse. There wasn’t an immediate cessation of loud noise but the TV show ended, they changed channels, and eventually quietened down thankfully.

Another thing that annoyed me was that soon after I sat down a young guy sat at the other end of the sofa (it was very large). As I said, the bar lounge was practically empty and I wondered why he didn’t sit somewhere where no-one else was. He then started to watch music videos on his phone at an extremely loud volume, through the phone’s speaker, which bugged the hell out of me. He’d stop watching, search for something else, then watch that. This went on for about 10 minutes and just as I was about to politely ask him to either put on some headphones, or move somewhere else, he gets up to leave. Completely objectionable and inconsiderate behaviour.

Time moves on and the barman calls last orders but I’d decided it was bedtime anyway. Literally a minute or so later a waiter comes across to ask me to leave. And guess who it is? It’s the thoughtless prick with the mobile phone from earlier. I don’t like the tone of his voice in asking me to leave, especially as he should see I still have a bit of my drink left – and the barman only called last orders about 2 minutes ago.

Enough, I decide. I recount the sofa experience from earlier and take him to task – nicely – for how he annoyed a guest in a nearly-empty lounge. But he doesn’t apologise and in fact starts to argue back at me! I keep telling him I’m pointing out his selfish behaviour as an employee in front of a guest. But no, he won’t have it. Next thing he walks away and returns 30 seconds later with a supervisor… I calmly explain the lad’s behaviour to the supervisor, pointedly looking at the lad when saying “I’m trying to help you here with your behaviour in front of guests.” The supervisor clearly understands this point, so I say to him: “You need to address the issue of him using his smartphone when on duty – now I’m going to bed.” And I promptly walk out before anything else can be said, probably just before they decide to evict me… 🙂

Sorry, but if you don’t speak out regarding such unacceptable behaviour, it will only continue. Rant over.