Arrival: Back In Pacifica

You are here: Home1 / Sierra Nevada & The Gold Rush Trail2 / Arrival: Back In Pacifica

Back To The San Francisco Peninsula

I get a taxi from my home in the UK at 11:00 am for a 2:05 pm flight from London Heathrow to San Francisco. This is probably too early but better safe than sorry. I’m through Security quite quickly and hang around in Departures until the gate is displayed. Upon arrival at the gate for boarding I find I’ve been upgraded to business class. Result!! The seats are a bit weird in BA Club World these days but comfortable and thankfully I’ve got a forward-facing one, I’m not sure I’d have liked a rear-facing one. The food and wine is very good as well. We land on time and I’m off the plane quickly as I’m in Business Class and then get straight through Immigration. I’m soon at Alamo Car Rental and get served straight away. The result is that having landed at 5 pm local time I’m driving away from SFO at just before 6 pm, which is amazingly quick.

I’m staying in Pacifica for a couple of nights, which I’ve visited before and I remember the route. There’s the usual heavy traffic on I-280 but nothing too bad. After turning south onto the Pacific Coast Highway, I soon arrive at the Holiday Inn Express Pacifica at around 6.30 pm. The hotel have upgraded me to a partial ocean view room, which is good. But considering the extortionate room rate of $500+ for 2 nights, it’s the least they could do! It’s nice to be able to see the sea from the room though. It’s still light but there’s no sunset to see tonight as it’s cloudy. But I decide to wander down to the seafront anyway before dark to watch the surf crashing onto the Rockaway Beach breakwater. 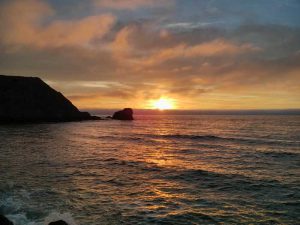 I unpack and sort out what I need for the next couple of days then head off to Nick’s Restaurant for a couple of beers. I decide against eating as the meals on the plane have filled me up. There’s some football followed by baseball on the TV and I have a bit of good banter with Scotty, the barman. I ask him about the band being advertised for tomorrow and he says they’re good. So I say I’ll be back, and he wishes me well as I say goodnight and he says “See you tomorrow buddy”, which is a nice touch. I’ve managed to stay up past 10 pm which I hope will be enough to break the jet lag.

Outside in the car park I hear the surf and wander to the sea front. The sea tonight has got a lot more agitated since earlier. And now it’s amazing… The sea is really rough, the waves sending spray way into the car park. I watch and listen, as close as I can, to them crashing over the rocks for a while and it’s brilliant. It’s dark but I can make out the surf as it violently rolls in. Experiences like this are what the trip is all about – they can’t be bought. It was awesome. Then it’s finally back to the hotel for some sleep…