You are here: Home1 / Sierra Nevada & The Gold Rush Trail2 / Through Central Valley

Back South on the Pacific Coast Highway

The weather is still as yesterday when I awake – cloudy and drizzle, the wind blowing hard. There are more surfers than ever out catching a wild wave or two. After breakfast – perfectly serviceable again – and checking-out I drive off in the gloom after briefly going back to Nick’s car park to watch the waves again. Still wild and wicked! 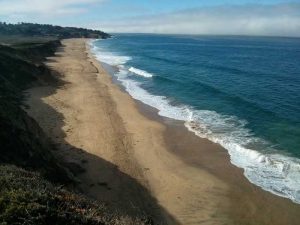 I’m back on the PCH almost a year to the day from when I was last here. But the contrast in the weather could not be more stark from last year’s sun, blue skies and warmth. So this year I can’t see much of the coast through the overcast gloom. I do though remember stretches of Highway 1 and it’s still as impressive as I recall. Approaching Half Moon Bay there’s heavy traffic southbound and I frequently come to a halt.

From about 3 miles outside the town I’m just crawling along. It turns out it’s Pumpkin Festival weekend and it’s clearly a big deal, as the pumpkin farms I pass have literally thousands of pumpkins laid out for people to buy. I come across a portable electronic road sign that says “Expect Delays” – a bit late to tell me now – and I eventually turn left off the PCH onto Hwy 92 E.

The road is now clear for me heading out of town but the other side of the highway is literally nose-to-nose cars coming from Silicon Valley over the Santa Cruz Mountains trying to get into Half Moon Bay. In fact, turns out it’s solid cars all the way along Hwy 92 back to Hwy 101, about 15 miles! It’s a nice drive over the top of the mountains and the weather starts to turn. By the time I’m on the San Mateo Bridge crossing SF Bay it’s sunny with just a few clouds in the sky and the temperature’s climbing as well.

Once on the east side of the Bay I’m driving on Interstates for the next 100 miles or so to get me across the state. The traffic is heavy but it’s moving and it’s a pleasant enough drive but there’s not much to see as I pass through the cities in the area, just the typical US vistas of shopping malls and business parks. I-580 swings south and turns into I-5 at some point that’s not signposted. The scenery loses the urban sprawl as I head out into countryside. It’s flat and uninteresting for the most part but the traffic’s light.

It’s really starting to warm up now and all the clouds have gone. I turn off I-5 onto Hwy 140 and drive east again towards Merced. This road will take me all the way to Yosemite. Just off I-5 I pull over into a Chevron gas station to buy a soda and eat lunch on the forecourt, finishing off the huge sandwich I bought yesterday, which I didn’t finish and brought with me. It was still just about OK to eat. 🙂

The road is flat and straight almost all the way to Merced. It’s farming country here with a mix of cattle and crops. The wind is raging though as I see trees being blown all over the place despite the blue skies and 85 F degree heat outside. Huge dust storms are being whipped up across the arid, open fields. In places I’m driving through ‘sandstorms’ but ones made of soil from the fields. And then suddenly it’s gone: obviously in places trees and grass anchor the soil more firmly than in other places. 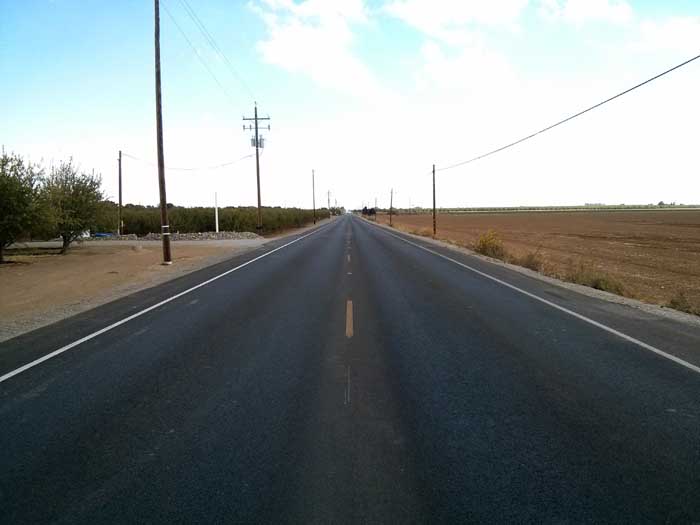 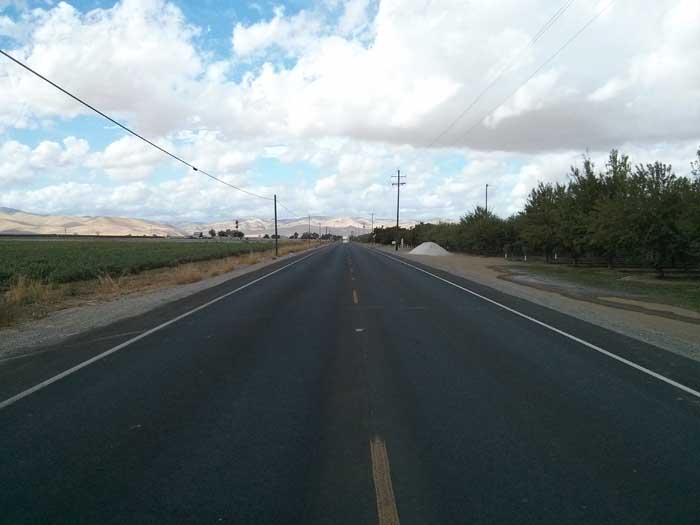 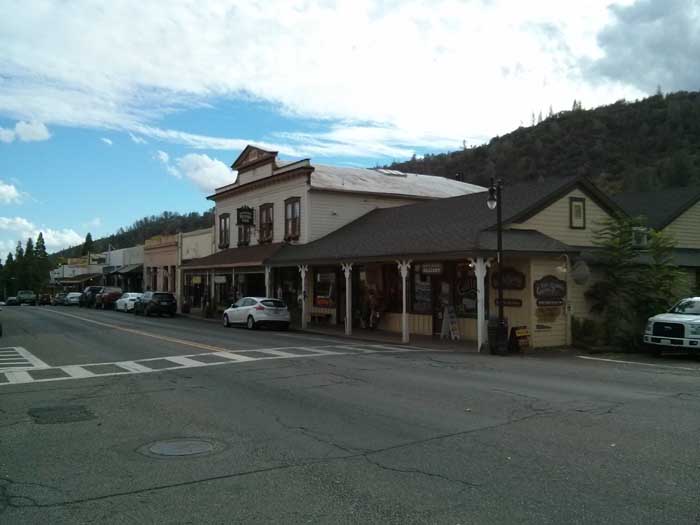 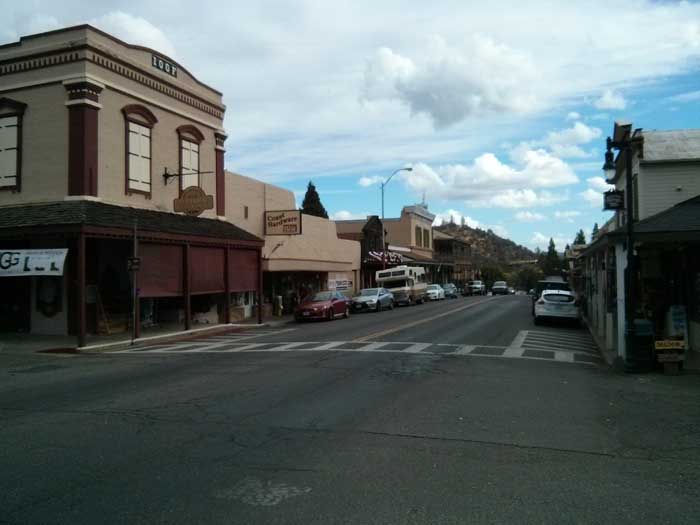 I cross through Merced and drive towards the mining town of Mariposa. The road starts off flat and straight but then I start to see little humps, hillocks and rocks poking through the grassy fields on either side of the road. This must be the start of the foothills of the Sierra Nevada. Soon after, Hwy 140 is rolling up and down with sweeping curves that become quite tight in places. I realise I need to really start concentrating hard as the drive has become quite technical from just being flat and straight a few miles back. It’s a good drive though and Mariposa looms into view.

I stop off here to visit the California State Mining Museum, which is very interesting. It’s my introduction to the Gold Rush and the subsequent gold industry that grew up in the area. Quite a small museum but it’s well worth a visit. There’s no breakfast provided in tonight’s hotel and my prior research advised that village shops near the hotel – the few that exist – are expensive. So I buy breakfast in a town store, fill up with fuel, and then head off towards El Portal.

The clouds have started to gather though and the sun becomes increasingly scarce as I drive along 140-E. This is a shame because the scenery is stunning as I get nearer to Yosemite National Park. The road goes up and over a mountain and soon the Central Yosemite Highway, Hwy 140, is down on the valley floor tracking right by the Merced River. Hillsides tower upwards vertically on each side. The road twists and turns all the time, and whilst quite narrow it’s OK but there’s no room for error. I think to myself that it would be stunning with blue skies and sunshine lighting up the hillsides but that’s not to be. But still pretty amazing. 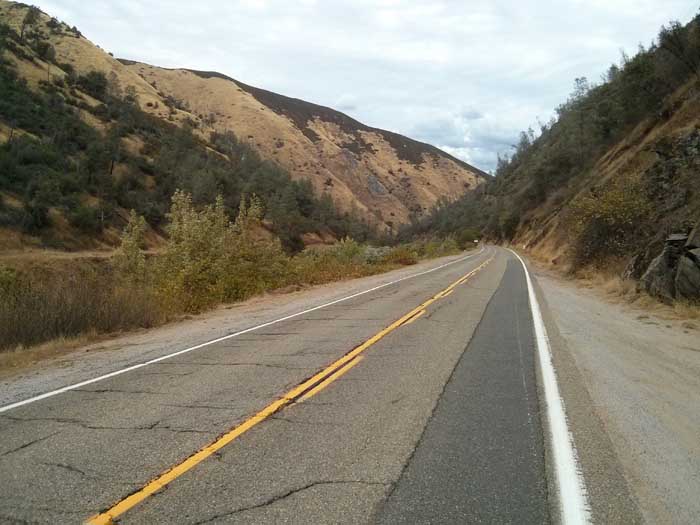 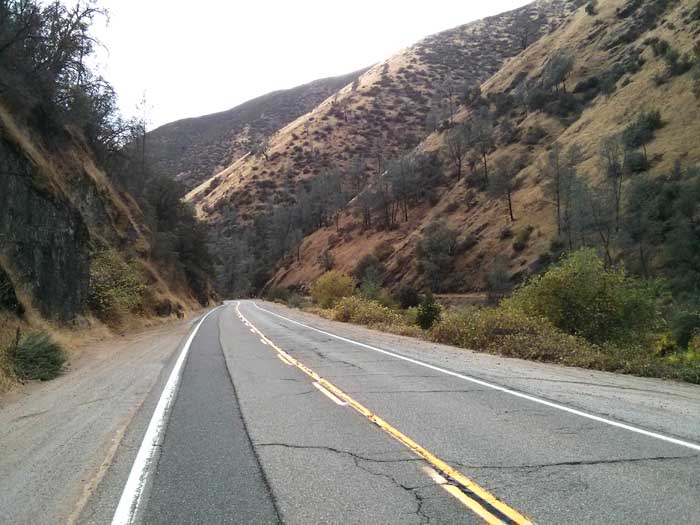 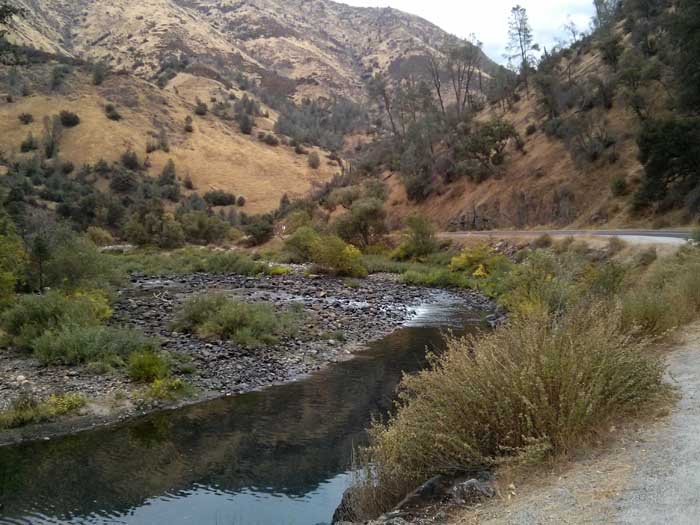 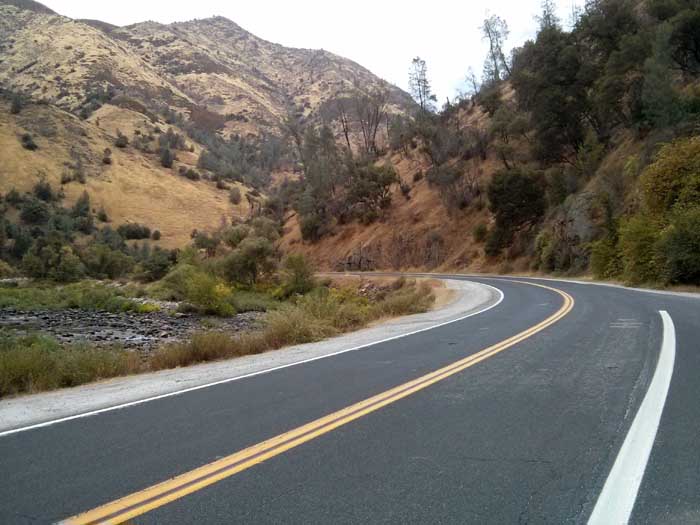 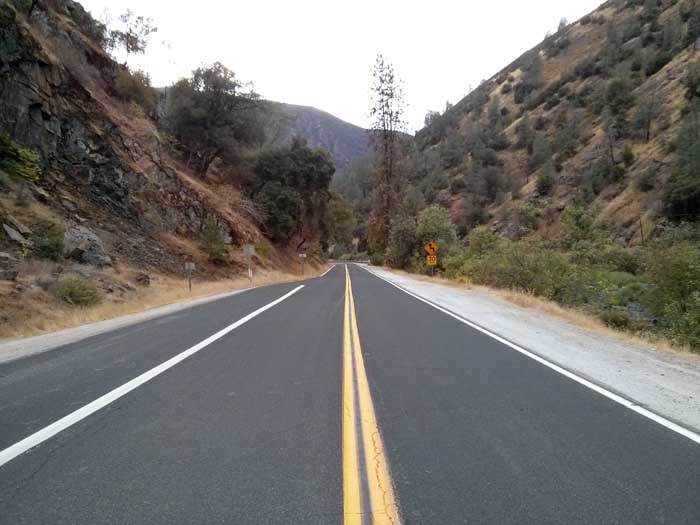 The hotel, the Yosemite View Lodge, comes into view and it’s way bigger than I envisaged. It gave me the impression of being a pokey little motel when booking but it’s huge. Whatever, I don’t care, despite the exorbitant cost for the night because of its location just outside the Park entrance. The room is OK, it’s clean but could do with updating and it’s fine for one night. I sit out on my ground floor balcony right by the Merced River, which here is little more than a stream. Soon I am joined by a couple of racoons, who seem to want to come onto my terrace. I eventually shoo them away but they didn’t go easily. Need to make sure I keep the door closed! 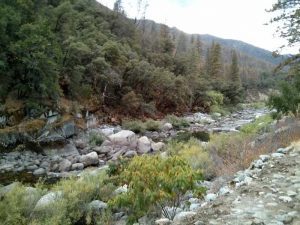 Merced River at the back of the Yosemite View Lodge 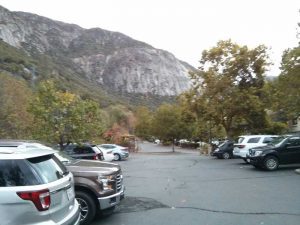 Time for dinner. There are limited options and the only proper restaurant is horrendously expensive so I try the pizza place next door. It’s not too bad but it’s laid out like a school dining room, bright, functional but no atmosphere at all. I finish my meal and leave to find that it’s started raining. I checked the weather earlier and there is a storm forecast overnight and it’s obviously here now. By the time I go to bed, the rain is howling down like a banshee. I just hope it blows through by tomorrow morning. 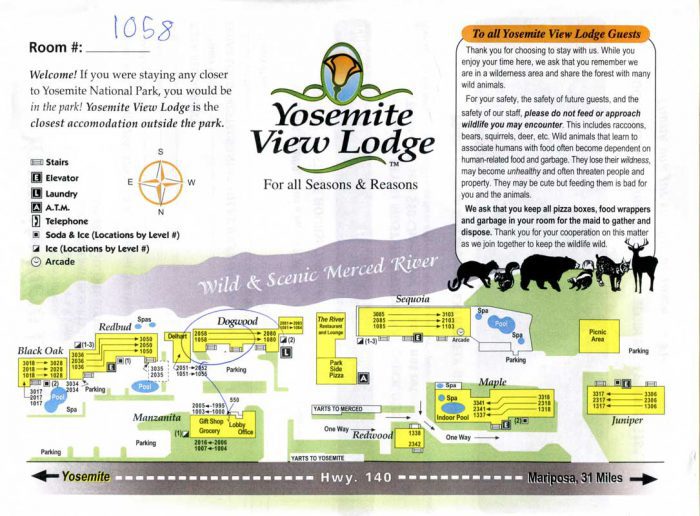