Over The Yuba Pass To Nevada City

You are here: Home1 / Sierra Nevada & The Gold Rush Trail2 / Over The Yuba Pass To Nevada City

Across The Sierra Nevada Over The Yuba Pass

I breakfast in my room and check out late around 11.45 am. I’ve not got many miles to do today on the way to Nevada City so I don’t want to be too early in arriving at my destination. So I just chilled out and updated my diary earlier. The weather has completely cleared up now and the forecast for the rest of the week is warm, sunny and dry. Hurray!

Leaving the hotel I get onto I-80 E then turn left up US Route 395 N and soon after crossing the California state border I leave 395 and turn left onto Hwy 70 W. After a few more miles I arrive at the top of Highway 49, the Golden Chain Highway, in the small community of Vinton. There’s not been much to see so far today, mostly flat countryside and little of interest. Heading south on Hwy 49 here there’s not much change initially either. Cattle farming seems to be the industry around here but it’s not intensive as there is plenty of open, unused fields. The first town is Loyalton and it’s small, almost nothing there. 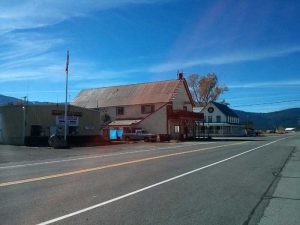 Next is Sierraville where, after driving through and turning back, I stop at the café I saw for a coffee and sandwich. I’d realised it was lunchtime and thinking there might not be much in the way of towns further up the road, decided to go back. It’s getting warm as I sit outside in the sunshine eating my Turkey Deli sandwich. A few folks come and go into the café, it’s all very local but no-one asks me my business despite obviously being a tourist. Considering how remote this place is, it seems a hive of activity.

I’m glad I turned around and stopped there, I even ended up saving half my sandwich for lunch tomorrow as it was huge. Back driving on the Gold Rush Trail again the road soon starts to climb up. And the scenery becomes more interesting. Then the road starts to twist and turn and I think to myself, “This is getting good!” I come across some roadworks and I’m escorted again by a pilot car, just me in a convoy of one. After I’m let loose the drive just gets better and better. There’s no other cars in either direction, which is great having the road to myself. Soon there are a multitude of sweeping bends one after another, then some tight curves to negotiate, allied with stunning views as I climb the Sierra Nevada towards Yuba Pass. There’s snow on the higher hillsides that glisten in the sunshine – this is an awesome drive. 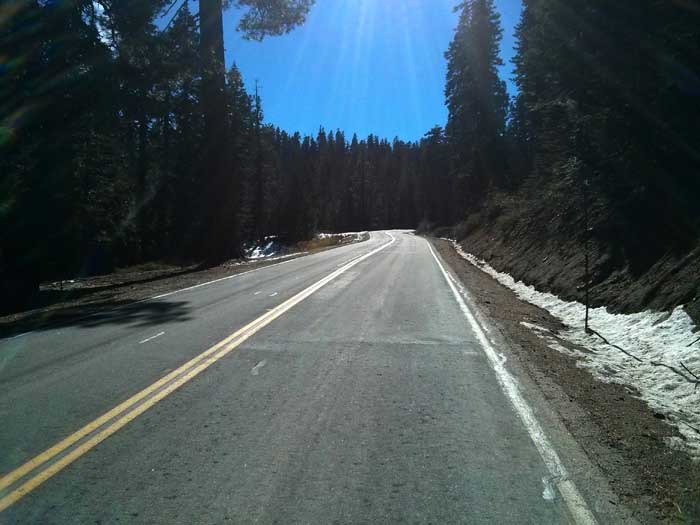 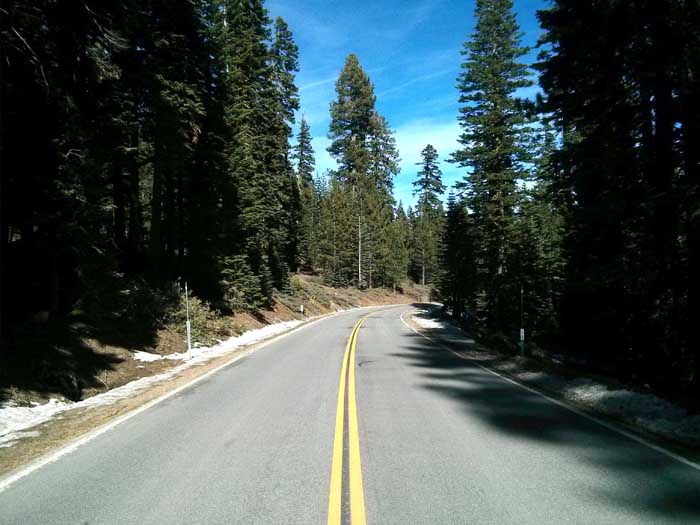 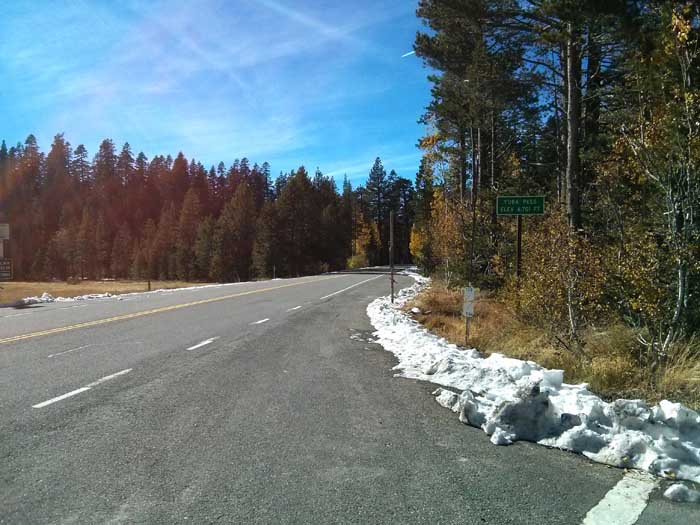 What follows can only be described as an absolutely stunning drive, going over the Yuba Pass at 6,709 ft, then slowly down the other side. Sometimes up again, then down, sweeping left, then right, through beautiful scenery with sunlight streaming through the trees that line the road. 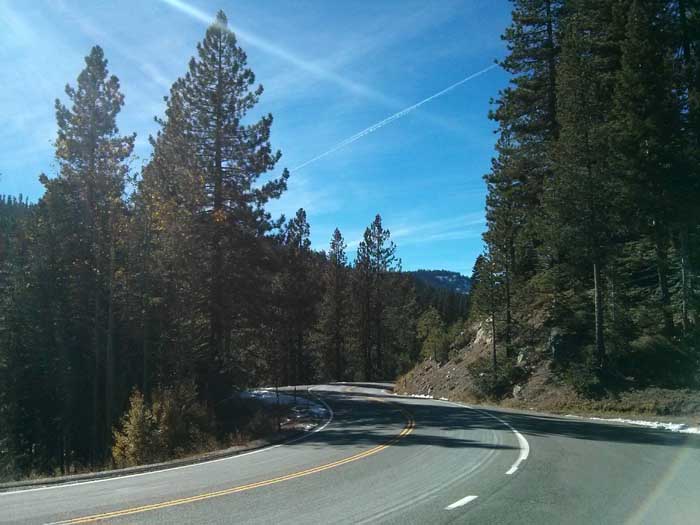 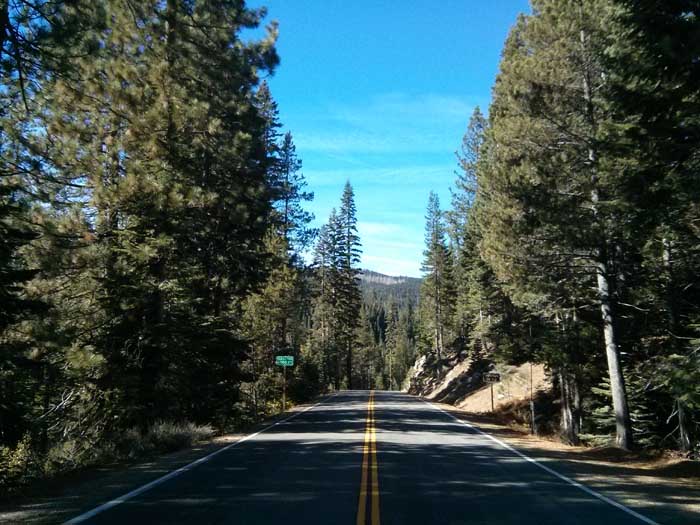 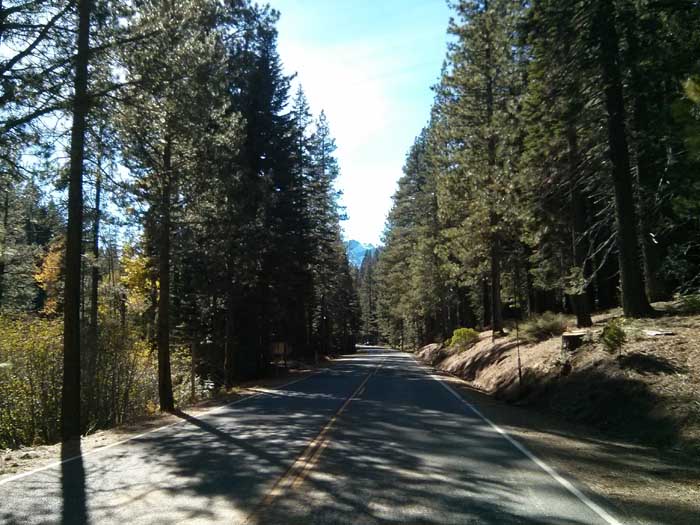 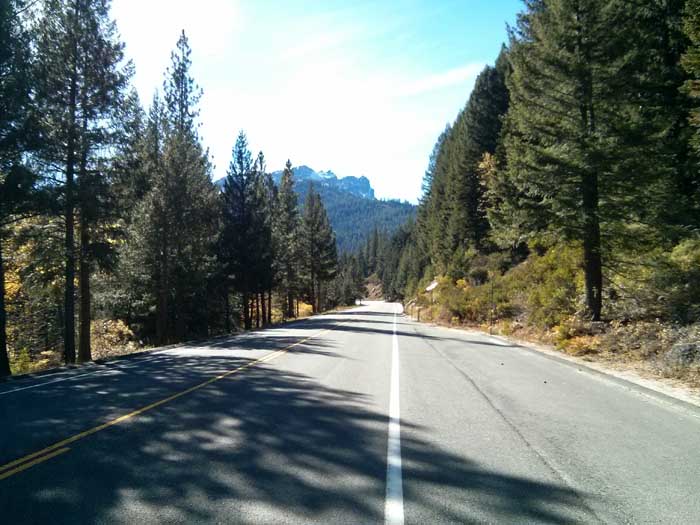 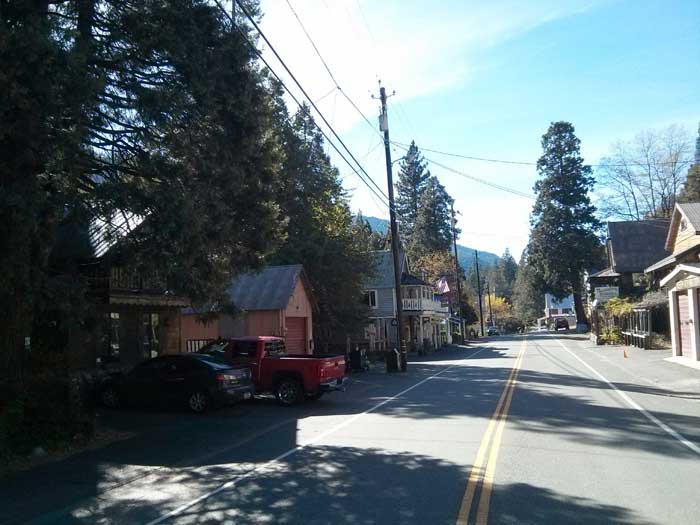 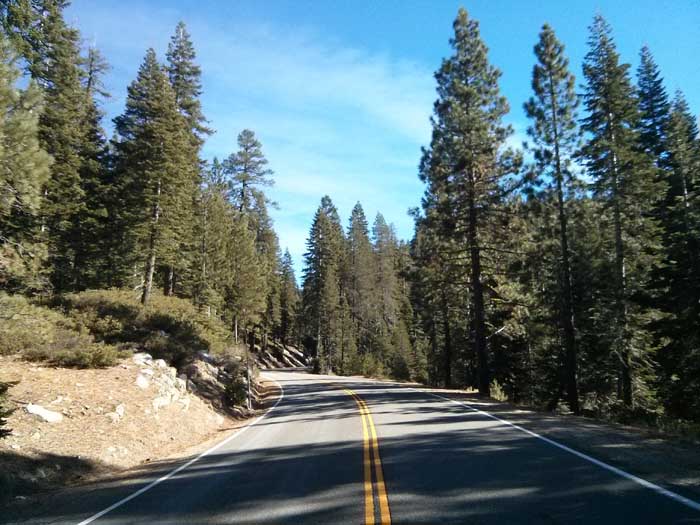 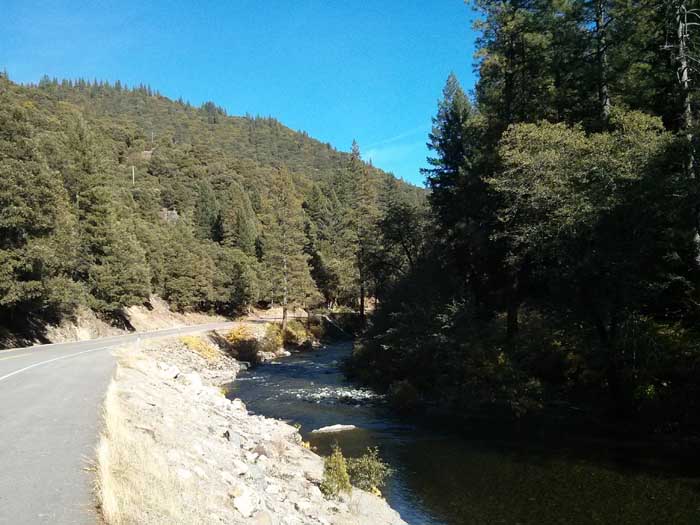 I drive through some small towns and communities where it’s noticeable to see loads of snowmobiles on driveways and in premises. There’s even a snowmobile repair shop. They clearly get some serious weather up here in winter. I continue on down the mountain and the views go on and on… 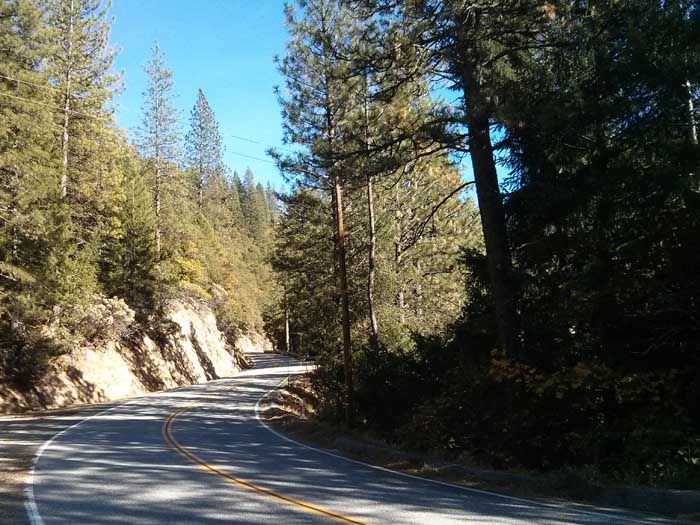 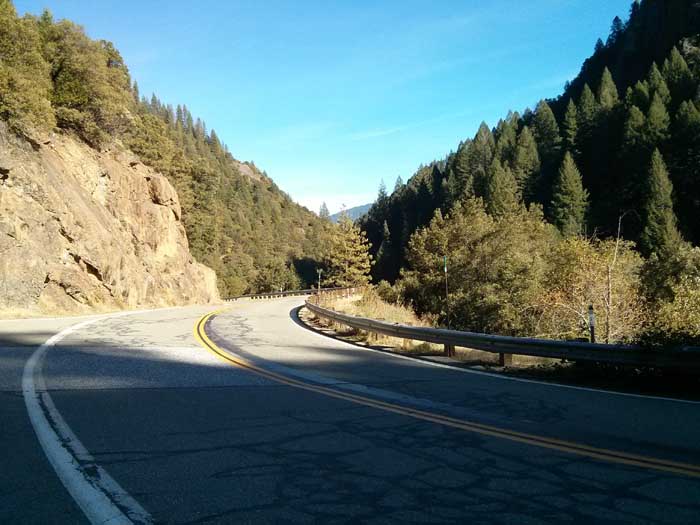 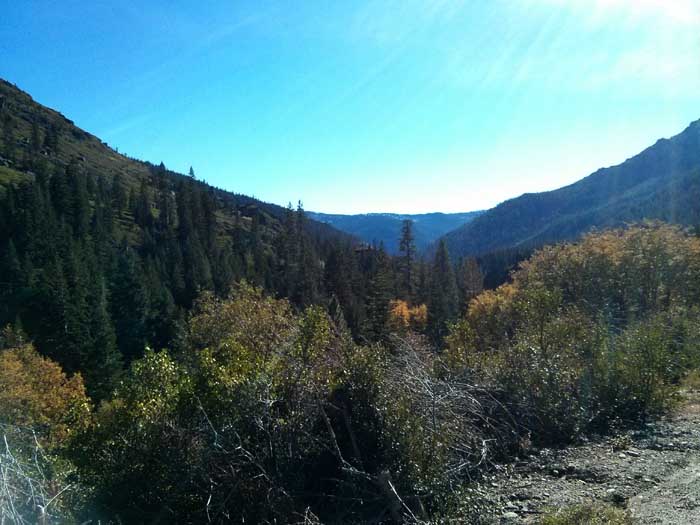 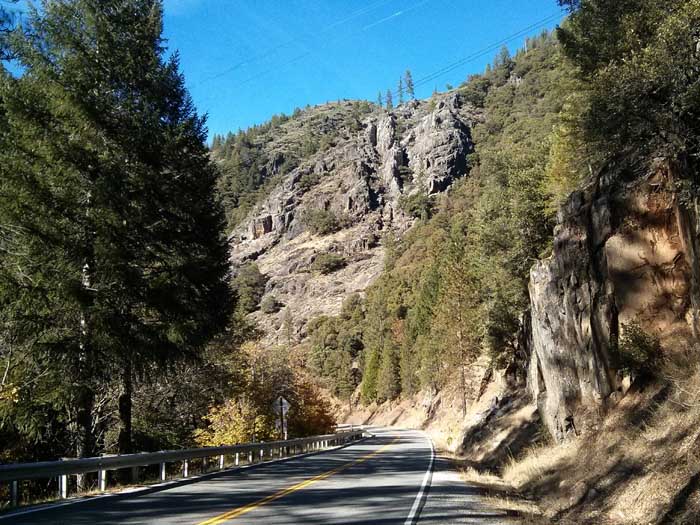 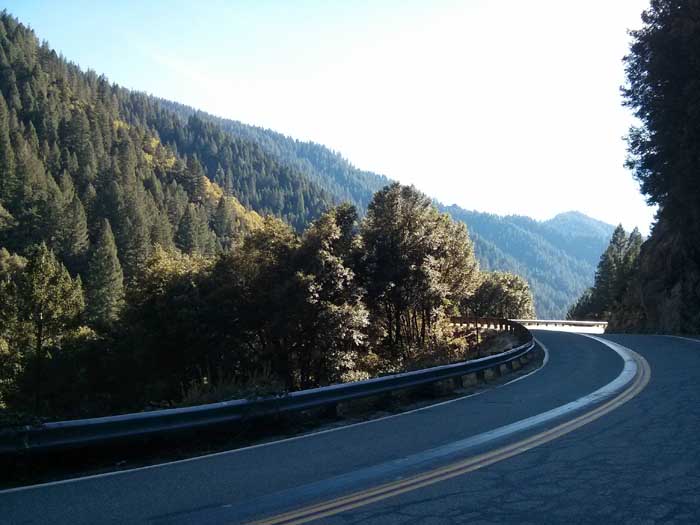 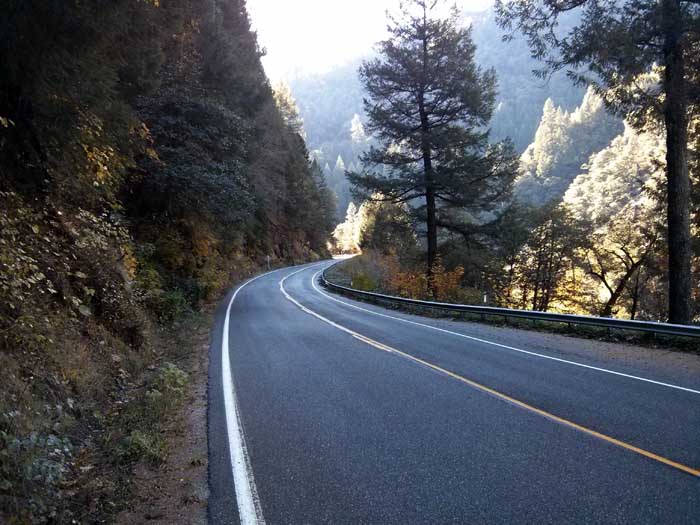 Nevada City In The Mother Lode

The road starts to flatten and straighten out a bit but I’m driving through forest-lined hillsides for most of it. It’s been one lane either way from the start of Hwy 49, which I turn off as a sign for the centre of Nevada City comes into view. I find the Broad Street Inn, which is a cute – if expensive – old house converted into a hotel, my home for tonight. But what a drive today. Absolutely superb. Nevada City’s elevation is 2,477 feet so I’ve dropped over 4,000 feet from the Yuba Pass.

After check-in I walk down into town to find a grocery for tomorrow’s breakfast, rest up back the hotel for an hour, the head back into town for some dinner and a few beers. About half the bars that are open don’t serve food, which is a bit of a surprise. Yet I don’t fancy many of the restaurants – not that there are that many – and I end up in abar called Matteo’s Public (since closed) for some wings (again). The menu was not particularly enticing to be honest but the wings are OK. It’s very quiet in the restaurant, so much so that they decide to close early and effectively chuck me out! In a nice way though. 🙂 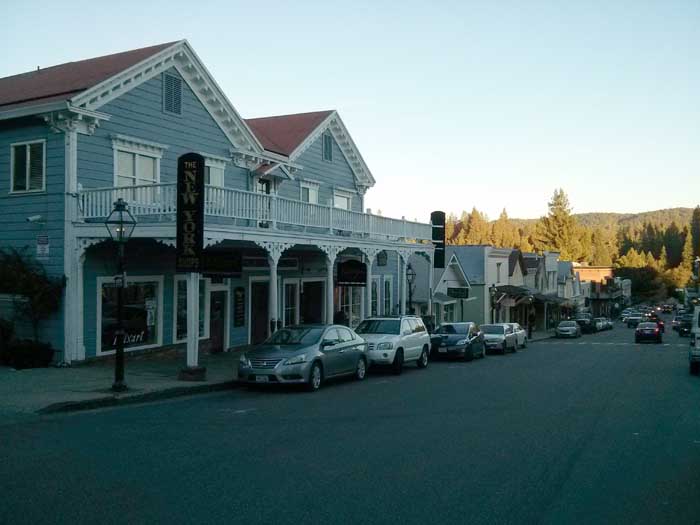 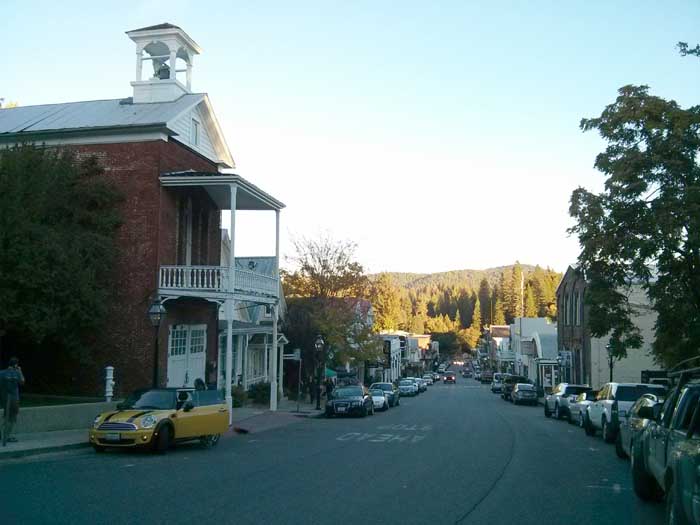 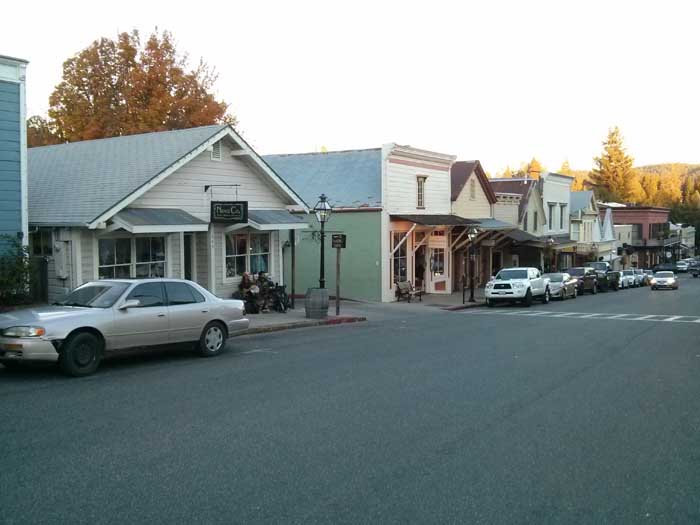 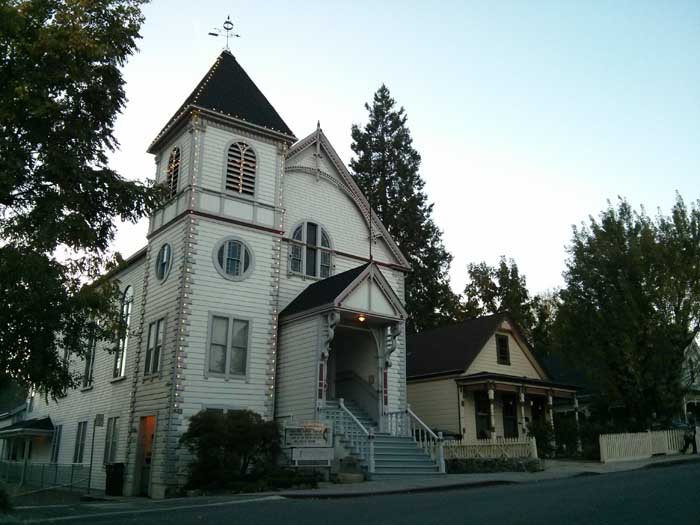 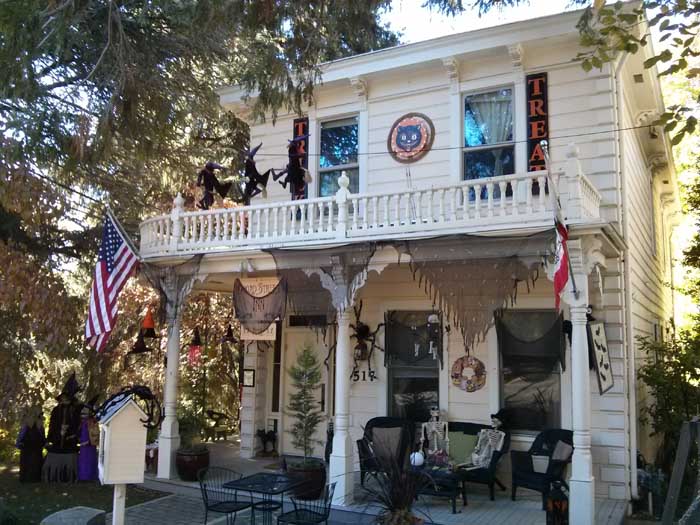 I wouldn’t have stayed anyway as the place really was dead. Before leaving I got engaged in a chat with a local lady, a friend of a waitress who’d popped in. She had some real parochial views about wanting to keep Nevada City “off the beaten track”, as I’d mentioned never hearing about the Golden Chain Highway before planning my trip. “We like it that way”, she replied. All very pleasant but an interesting viewpoint. She does tell me however that there’s some live music in a bar on the main drag, Broad St, but that she didn’t “like the vibe” so she left. The clientele made her uncomfortable she said. Sounds interesting I thought, let’s check it out!

So I depart in search of the Golden Era bar. This place was on my radar anyway before the trip as I’d seen it had live music but their website said there was nothing on tonight. Nice to see a business keeping its potential customers well informed. I arrive and it’s very busy inside, so much so that I cannot get a seat at the bar so I have to park myself on a table. There is a band playing and they are called Northern Roots, who are a bunch of local white guys playing… reggae. I kid you not. Anyway, it turns out they’re actually quite good. They play well, sing well and the tunes are good.

But I keep pinching myself as they play on that I’m listening to a bunch of white guys playing reggae. In Northern California, in the foothills of the Sierra Nevada. Truly bizarre. So, a beer in hand and with the music as a backdrop I open my diary and write a few more pages. Everyone ignores me and I’m not sure what freaked that girl out earlier as everyone’s having a great time and there’s a good atmosphere. Sure there are some weird looking folks, all tattoos and piercings and funny hair & clothes but it’s not some backstreet dive or hell-hole where you think “I need to leave”. The band finish their set to bring an end to a reasonable evening in that the food options were limited but the Golden Era was good.

But what a drive earlier in the day. Truly astonishing. Great day overall.