A Long Drive Into Canada

You are here: Home1 / Coast To Coast2 / A Long Drive Into Canada

Another OK breakfast at this hotel and I’m ready to go just after 10 am. Android Auto in the car is not taking my pre-planned Maps routes, something I recall from last year as well. But I didn’t pay enough attention to it then, I’ll have to figure it out this year though. Canada here I come!

(Note: towards the end of the trip I did figure out what was going on – essentially Maps will always calculate the fastest route between start and end points when you start navigation. Dragging a route on screen when planning, then saving it, is ignored when loaded live. The way to force Maps to go from one point to another, say if you want to visit somewhere or drive on a specific highway, is to use discrete intermediate stops along the way, not dragging the route. Even then there are some quirks which I won’t waste more space explaining. It was very frustrating having spent time planning each day’s route to then have Maps thinking it knows better…)

The first part of the drive is alongside the Susquehanna River but with heavy cloud cover and no sun, what could be a nice drive is just OK. It’s cool outside at 77º F and the cloudy conditions continue until early afternoon. This is a shame, as I drive through some forests and ever changing landscapes on a 4 lane freeway – fast, clear, nothing technical – but the gloomy weather puts a downer on things.

But this is just the start of a long day on the road. 330 miles and 6 hours according to my pre-trip estimate, though Maps said it was even longer when I set off. I stop in Philipsburg at a Sheetz gas station and get a made-to-order deli sub for lunch later, as I’m unsure what might be available when I’m driving through the Allegheny National Forest.

The route is taking me through small towns and countryside. The weather is brightening up and it’s getting warmer. It was the low 80s in Philipsburg and partly sunny, so the drive is perking up. There’s a mix of farming and light industry roadside. For the next 100 miles or so it’s a 2 lane highway, meandering along, making for an interesting drive.

Once into the Forest there are hills to climb and descend, not-too twisty bends and a good speed is generally maintained. The odd truck does slow me down though as it slowly crawls up a hill. What is noticeable is the lack of any turnouts or places to pull over and eat my lunch. This was the case on US-322 W earlier as well so there’s little in the way of photo opportunities either, other than a couple of places in the Forest. It’s nearly 2 pm when I can finally stop, in Ridgway, using a church parking lot of all places as it was the first place I saw on entering the town. 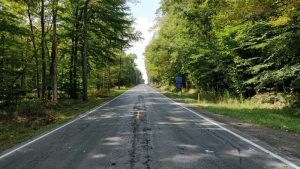 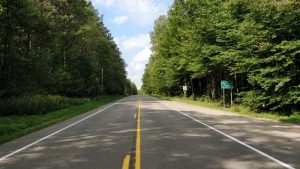 After this the forest starts to widen out and the road starts to flatten as well. Soon the forest has gone and I’m back out in open countryside, heading towards I-90 N. Once on this road, it’s Interstate all the way to the Canadian border. I change countries reasonably quickly but there’s still 13 miles to go before I arrive in Niagara Falls, Ontario.

My tour tomorrow has an 8.30 am pickup time and initially I decided to have a hotel breakfast, but I changed my mind on route. So I arrive outside the hotel about 5.30 pm – which made it my longest ever day driving time-wise – but then cruise around to find gas and breakfast. Duly found and bought I drive back to the Hilton Niagara Falls/ Fallsview Hotel and Suites. I knew it was valet parking at $35 a night and was resigned to that. But when I pull inside the garage, the valet questions my stay. I explain my plans and he then suggests I park in the casino car park opposite. He says it will cost $20 maximum, not $70 with him. Plus there is a walkway from the car park direct into the hotel. So that I do.

There’s a short wait at check-in but eventually I get into my room. I had specifically booked a ‘Falls view’ room, so I pull open the net curtains to see Niagara Falls in all their glory. Well, not quite. There is the small matter of the casino roof opposite partly in the way of my ‘view’. I feel misled and somewhat conned by this. I check the hotel’s publicity photos and re-check my reality. The hotel’s photo is either Photoshopped or some very careful photography from a drone or helicopter. Yes I can see the Horseshoe Falls but not all of it, nor is it an unencumbered view I’d been led to expect. 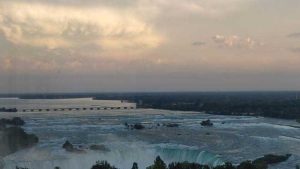 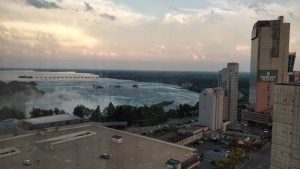 The actual room view of the Falls

After unpacking I head downstairs to the Spyce Lounge for food, drink and music. It’s part of the hotel but the Lounge had a good online reputation for live music. In fact it was about the only place in the city that had live music on a regular basis. Settled at the bar, I order a corned beef sandwich and fries from the somewhat underwhelming menu. This turns out to be what I call pastrami with sauerkraut and mustard. The bread is a bit on the greasy side, too much butter I think before it was toasted or grilled. But it does taste good.

The band is Phil & Friends. They play all covers and a very eclectic mix it is, including Sultans of Swing, Clapton’s Lay Down Sally, You’re So Vain (?!!), ELO’s Don’t Bring Me Down, Bob Seger’s Night Moves, Honky Tonk Women and Led Zeppelin’s Rock’n’Roll – amongst many others. Such as Gloria Gaynor’s I Will Survive. As I said, very eclectic, even bizarre. There’s only three in the band but they are very good, making a good ‘sound’ and they play very well.

However, I spent 7½ hours in the car today, driving 331 miles and whilst I feel all right now, I’m conscious of the early-ish start tomorrow so decided to head to bed around 11 pm. Back in the room, I’d left the curtains open and am surprised by the Falls being lit up by coloured lights. It’s quite a show. 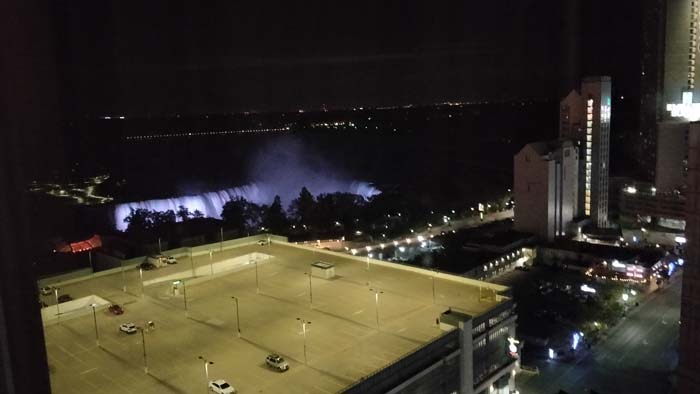 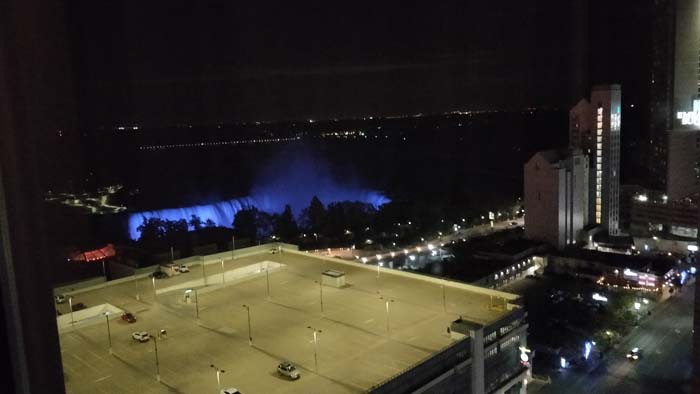 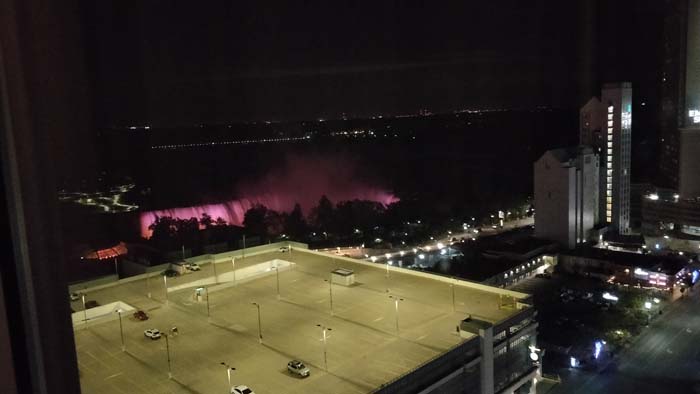 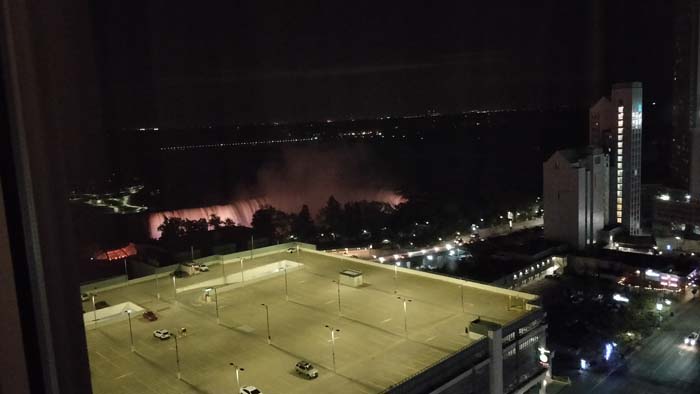 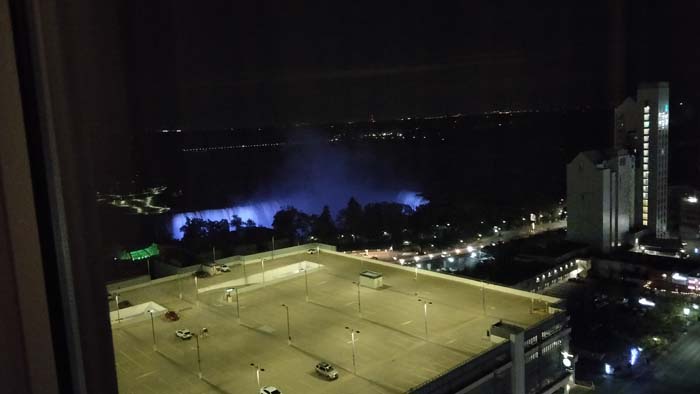 Overall I enjoyed the drive today. But it was long, with changing weather, many different road types and scenery. I found it hard to summarise when writing this. The problems with Android Auto and Maps didn’t help. Again though my pre-trip planning reaped dividends because I could remember the route and bypass Maps’ stupidity in constantly trying to re-route me. For now, some sleep.