You are here: Home1 / Sierra Nevada & The Gold Rush Trail2 / South To Sonora

After my breakfast I’m back on the road, finding Highway 49 again, which bypasses the town. I’m driving south to Grass Valley for the Empire Mine State Historic Park. This was one of the biggest and richest gold mines in California during its mining history of 106 years, and it only stopped working in 1956. There’s a good little museum where I learn a lot about the mine and gold mining in general. After that you can venture outside to walk around the grounds where a lot of the old buildings are still intact and well preserved. There are information boards all around to educate you even more. It’s all very well done and well worth a visit.

Heading back south on Hwy 49 the road has become a 2, sometimes, 3 lane freeway, which it stays as all the way down to Auburn. There’s also a fair bit of traffic about. Not much to see however on this stretch, it’s mostly straight and a bit commercial in places, and just typical USA. However once I’m through Auburn the road becomes one lane each way again. There’s a twisty section up and over some hills with some nice scenery. I stop at a mini-mart in Cool – I kid you not – to get a drink for lunch later, having saved yesterday’s sandwich. There was a fridge in the kitchen area of hotel so hopefully the sandwich will be alright. 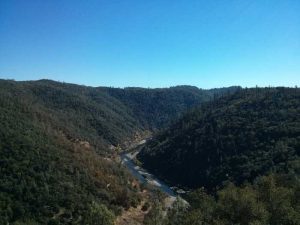 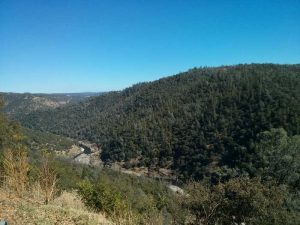 Views from the Golden Chain Highway south of Auburn

American River – the spot where gold was first discovered

The weather is good, with blue skies and it’s getting very warm. I pull over in a turnout a few miles later under some trees to eat lunch. After which I continue on towards Coloma and the Marshall Gold Discovery State Park. This park marks the spot where gold was first discovered in California in 1848 in the American River. I go into the museum but after chatting to the Ranger on the desk, who didn’t really sell the place to me and telling me there’s not much in it, I decide not to pay $10 to enter. And frankly there’s not much to see anywhere in the Park. I drive across the road to a car park by the river and walk down – as far as you can – to the discovery spot, which is not marked in any noticeable way other than a sign by it. You are supposed to pay $10 to park here but when I questioned the Ranger he said that if I was only stopping for a few minutes then I should be OK. The car park is deserted and with no-one else around, I don’t pay. 😉

I suppose it was good to see the spot where gold was discovered but there’s nothing much else to recommend this place. It’s gotten really hot now, so that’s another reason not to hang about outside. On the road again, the countryside is gradually becoming flatter the more south I go, but the scenery remains nice. There’s nothing particularly challenging or technical about the road either, it’s just a nice, pleasant drive. 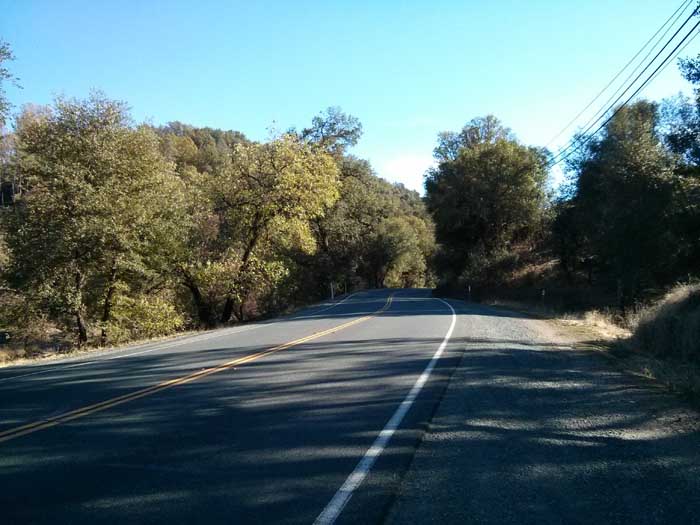 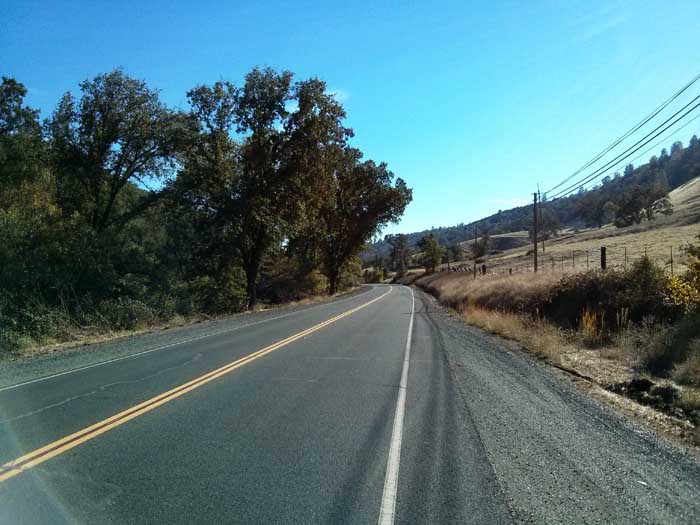 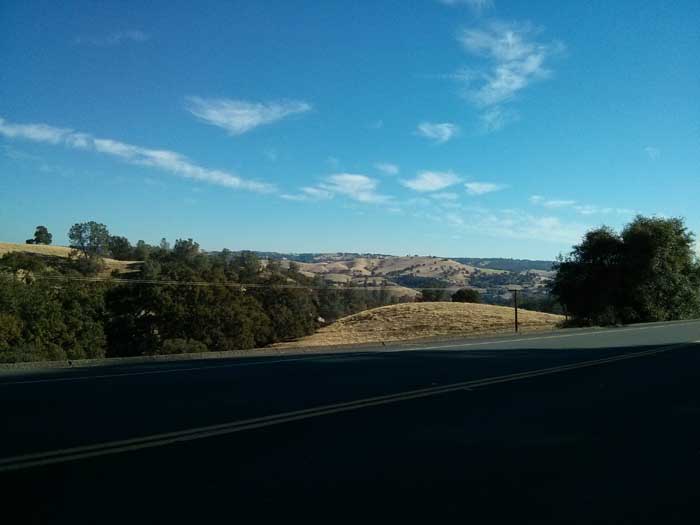 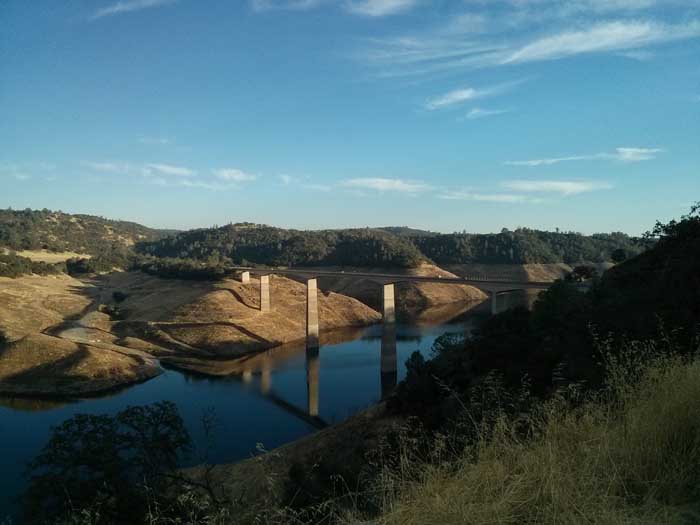 There’s a couple of road sections signposted Old Rte 49, which I take, one of which takes me into Sutter Creek, an old mining town with original buildings. I stop for a wander around and it’s all very nice and quaint. 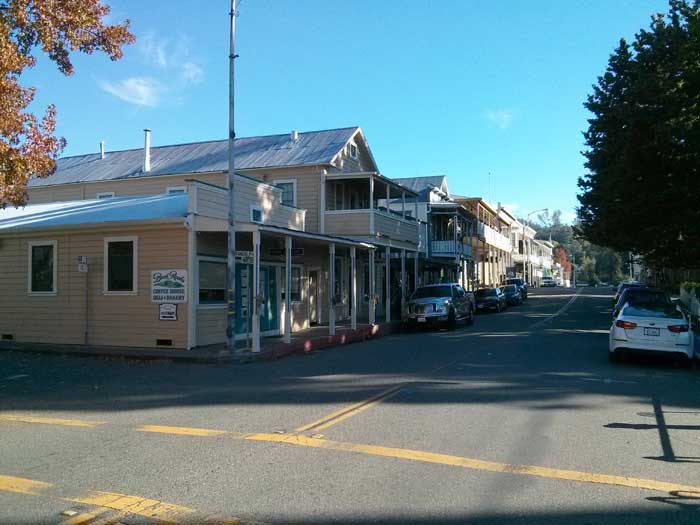 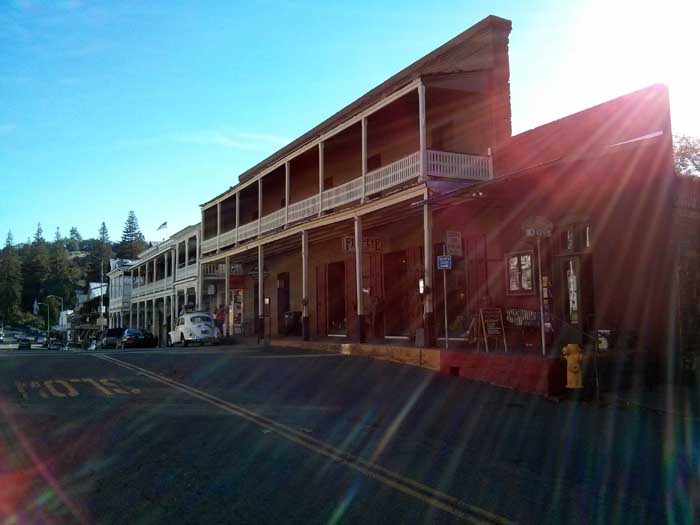 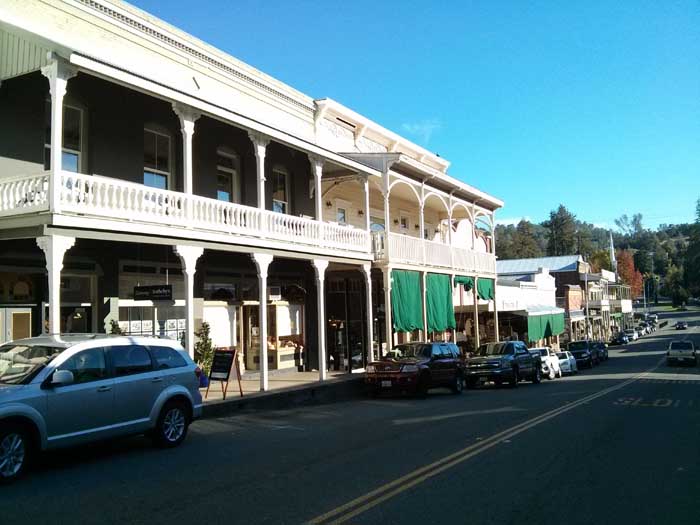 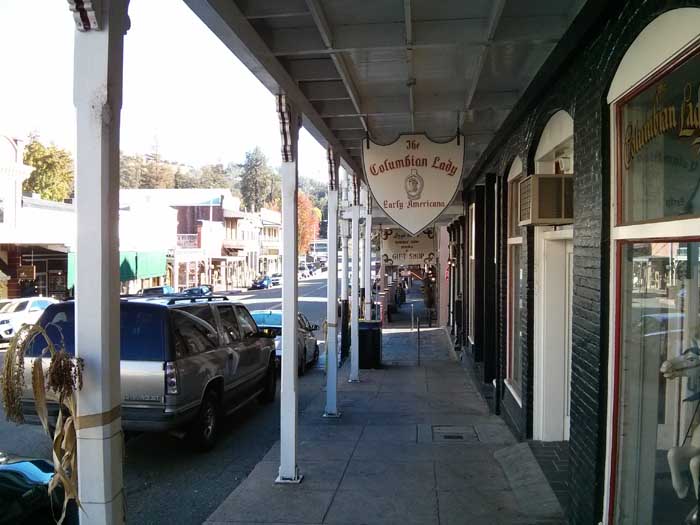 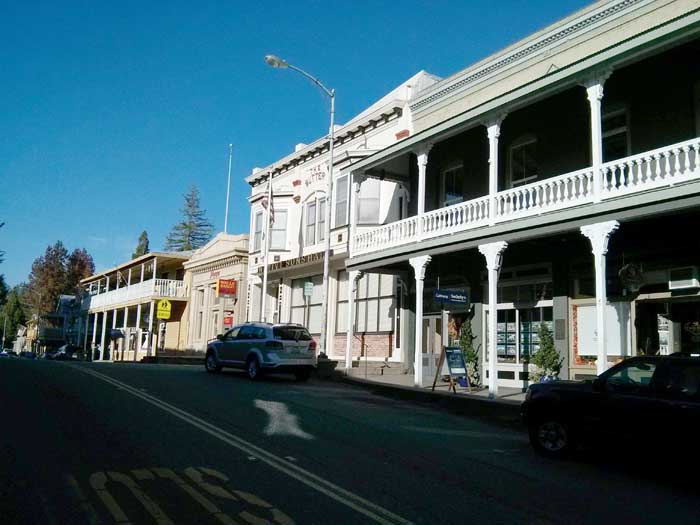 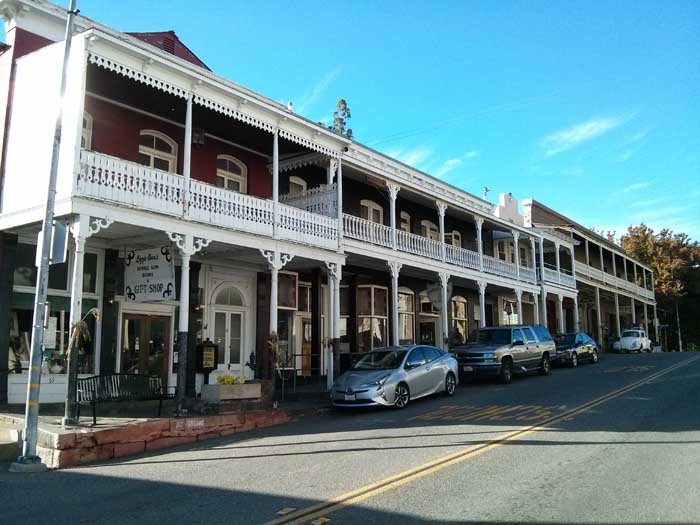 The rest of the drive down to Sonora is good. Through the towns of Jackson, San Andreas, Angels Camp and others. As before, nothing extraordinary but a nice drive. Highway 49 passes through many historic mining communities of the 1849 California gold rush. Wikipedia states the road as being in existence since 1934. I guess it followed established trails that linked the towns, and that after getting out of the ‘proper’ mountains, these trails trawled through the foothills on routes that made it as easy as possible for the horse-driven transport of the gold era. Or I might be completely wrong. And given the sections listed as Old Rte 49 my guess is that there’s also been some route realignments over the years.

Sonora will mark the end of my time on the Gold Rush Trail. Of course I passed through Mariposa further south earlier on the trip, but I’ve completed about two-thirds of the full route. It was just a bit too much out of the way to do the full route to Oakhurst, either now or at the start of the trip. I’d have almost certainly ended up back-tracking or doing a lot more miles. From Sonora I can head almost directly west to my next stop. I’m happy with what I’ve done this time, and as I’ve said before, there may be other trips when I can complete the section I’ve not done. Overall, I think the key to doing the Golden Chain Highway is that there are remnants of Gold Rush history all along it and it pays to do some research to see what interests you, and to plan ahead. For instance there were some old mines and museums that were closed for me because it was out of high season, which obviously I couldn’t do anything about. But I’m glad I did it, I learnt some history, saw some sights and had some great drives.

An Idiot In Sonora

Arriving in Sonora the traffic is very heavy in the centre but I find my motel, the Rodeway Inn, easily (this motel has since closed). I check-in and park right outside my door. The motel is cheap and cheerful, although still not that cheap as I’m in California. A couple of hours later I walk up the main street to suss out where to eat and settle on Emberz. It’s quiet inside but everywhere I check out is tonight. There are couple of guys at the bar and one of them starts chatting to me after a while, the other keeps himself to himself. I have a burger to eat and it was good. The chatty guy is from out of state, here on business and we have a pleasant talk until he calls it a night and heads off as he’s got an early start tomorrow.

I too decide to depart and return to my room to do my diary, and I ask the bar manager for a bottle of beer to take with me. Which she refuses to sell me. So I get into a long – but pleasant – conversation with her about CA state laws on alcohol, which is why she can’t sell me the beer. It turns out it’s all to do with an attempt to clamp down on an epidemic of drink-driving in the state. It seems that CA has a massive problem with young adults, who cannot legally drink until they are 21, getting drunk when out driving and killing themselves and others. Because they can’t legally drink until so late an age, when they are allowed to they apparently have developed no self-control nor awareness of the dangers of driving when drunk. Hence they ‘go mad’, get drunk, drive somewhere and kill people. So one of the ‘prevention’ laws is that the state stops bars selling alcohol ‘take-outs’ of any kind. And it doesn’t make a difference if the bottle is open or not.

However, the manager tells me, I can leave a bar and walk down the street to a liquor store, buy my beer and drive away. Just not from a bar. How bizarre. And what’s the point if I can just go to a liquor store? She also tells me that it’s an offence to have any opened alcohol in a car. So if I buy my beer or liquor, I can’t open it in the car. Even if I have no intention of drinking it, if it’s open I’m not allowed to have it the car, apparently even in the trunk out of sight. It was a real eye-opener of a conversation but I remain unconvinced the law will make any difference; it’s the attitudes towards driving when drunk that need to change.

So I bid her goodnight and go back to my room empty handed. And promptly nearly get killed right outside the bar by some idiot pickup driver turning left at a traffic signal when I have a green walk light to cross the road. He literally misses me by inches. Screeching to halt just past me because I was waving frantically at him, he then winds his window down and shouts “Hey, I didn’t see you, get over it.” Then he drives off. What a prick. Thankfully he was only doing about 15 mph when he just missed me – and it was only because I was aware and moved quickly – but otherwise I wouldn’t writing this…