I leave the hotel and drive the last / first section of the PCH for the last time on this trip, at around 10.45 am. It’s warm again with broken cloud. Onto I-5 N towards LA and my destination for tonight, Bakersfield. It’s about halfway between Dana Point and Sacramento, the next but one stop. When planning the route I figured at 460 miles it was too far to drive in one day to get to Sacramento. Hence a stop-off in Bakersfield. Whilst the goal was to blast up Interstates and/or good freeways to get north as quick as possible, I wasn’t going to do a long mileage or have to drive too fast, or late into the night.

Leaving Dana Point the traffic’s OK, flowing freely in my direction although the other side is crawling along. Let’s hope it stays that way… Many miles later I pass the turnoff for Disneyland in Anaheim, and the traffic slows every now and again, which I was kind of expecting, but I never come to a complete stop, I’m always moving so far – thankfully. 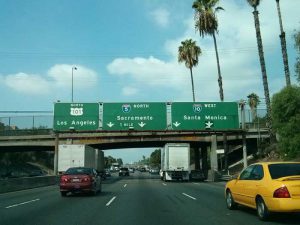 On Interstate 5 in central LA

Into the heart of LA on – at times – 7 lanes of highway on each side. I’m making good progress time-wise as the traffic is still free-flowing. The urban scenery is sometimes different but there’s not many ‘sights’ as such. The sign ahead changes to ‘I-5 to Sacramento’ as Hwy 101 splits off and the skyscrapers of downtown LA are visible to my left. It’s only 12 noon and I’ve only got about another 110 miles to go so I detour to try and find the Stough Canyon Park. I’m in Burbank now and I’d seen this park mentioned on a Burbank flyer I’d picked up somewhere. It’s supposed to have an elevated position overlooking LA, giving great views of the city. Google Maps gets me to the Park access road – but it’s locked. I check on the Burbank city website and there’s no indication or reason it should be shut but the barrier will not let me pass. I’d never thought that a park in the centre of a major city might be closed on a weekend in October, but it obviously is. I wasn’t planning to stay for long but it might have been an interesting little diversion, but never mind.

So I give up and drive around Burbank looking for something to eat. I come across a Subway and grab one for the first time this trip. Back in the car I then drive along San Fernando Boulevard looking for somewhere to pull over and eat. I find a park a few blocks down with tables under some large trees offering shade, which is what I need because it’s now 89º F with clear blue skies. It’s bloody hot again! When I’ve finished eating I’ve still got about a quarter left in the large container of orange juice I’d bought and I decide I don’t want it. There’s a homeless guy with all his stuff on one of the other tables nearby, so rather than trash it I wander across and offer it to him. “Hey, thanks man” he says. My good deed for the day. 🙂

Back onto I-5 N and despite my lunch break, with the traffic still light, I realise I’m going to be very early in Bakersfield and I know there’s little of interest, or to do, there. So what to do? The next exit sign on I-5 comes into view: Van Nuys Boulevard. When I was younger I was into custom cars a bit and I read about the custom car cruising that went on on the street. So with time to kill – and not expecting much because it’s only a street after all and cruising became a thing of the past as the police cracked down on the practice – I turn off I-5 onto the legendary cruising strip of the 60s and 70s. I drive along for a while but there’s nothing much to see, as I didn’t think there would be, other than to contrast it to Hwy 1 after Santa Monica, which was wall-to-wall shops, all crammed on top of each other. Here on Van Nuys it’s a much more traditional US street, with a mix of shops, schools, offices and houses. I pull over to check Wikipedia to see if there are any interesting landmarks nearby but there aren’t near me – it’s quite a long street, nearly 10 miles long – so I decide my detour is over and head back up Van Nuys to I-5.

Through The Mountains To Bakersfield 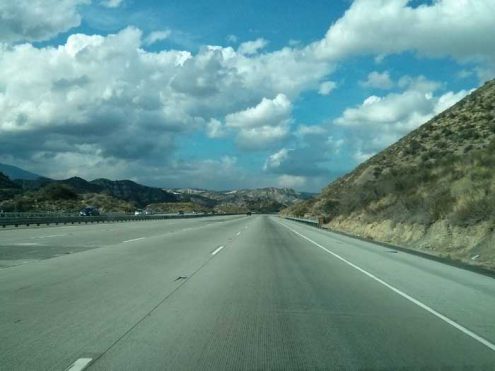 San Emigdio Mountains on I-5 N

It’s still bright sunshine and 87º F. The hills to the right of I-5 are joined by others ahead and a sign tells me I’m entering the Angeles National Forest. The road is cut through the hills and soon after leaving metro LA I’m driving through some very scenic and pretty countryside. It’s quite stunning actually considering I’m on an Interstate.

Into the San Emigdio Mountains and the scenery is still great. There’s a very large reservoir, Pyramid Lake, on the left. There’s a few really long hills where all the trucks struggle mightily up the steep inclines. The way the road seems to just flow smoothly through and across the mountains – I’d call them big hills actually – is superb. It’s a great drive and again a pleasant surprise as I thought it would be flat and boring. There’s a town called Gorman in the middle of nowhere, seemingly a trucker’s stop with gas, hotels and food. Then the Tejon Pass arrives, linking the Tehachapis Mountains, San Emigdio Mountains and the Central Valley to Southern California. It’s a lot colder and cloudier through the Pass but as I descend on the other side it heats, and brightens, up again. It’s been a really good section of road but soon I split right from I-5 onto Hwy 99, the Golden State Highway, which will take me all the way up to Bakersfield.

Hwy 99 is a 3 lane freeway with a 70 mph limit – higher than I-5 – so progress is rapid (no traffic lights…) and I’m soon at the hotel. I didn’t see much from 99 as I travelled up it – it was flat and boring, to be honest – as the surrounding countryside has nothing much of interest to see but it looks like farming country. My hotel, the Holiday Inn Express & Suites Bakersfield Central, is good. I’ve got a large room that looks new-ish and modern, and in good nick. Breakfast is included so I’ve no need to go and find a 7-11 or similar tonight.

A couple of hours to recharge before I wander a couple of hundred yards down the street to Buck Owens Crystal Palace to discover The Bakersfield Sound. I’m not a great country music fan but there’s nothing else to do in Bakersfield so I thought I’d give it a go. I did make a reservation for a dinner space/table before arriving in the US as this was recommended via their website.

The “world famous” Buckaroos start playing as I arrive at 7.30 pm. Musically it’s what I expected but thankfully there’s hardly any of the ‘misery music’ brand of country that rightly gets pilloried quite a lot, it’s all quite upbeat. The place is quite – but not totally – full, and I’m sat at a kind of bar counter looking out at the stage, so it’s a good view. I order a bowl of chilli which is very good but not particularly spicy. It’s served with what the waitress called biscuits but are in fact warm scones, and they might be quite pleasant with something else, but not with a bowl of chilli. I do not eat them. 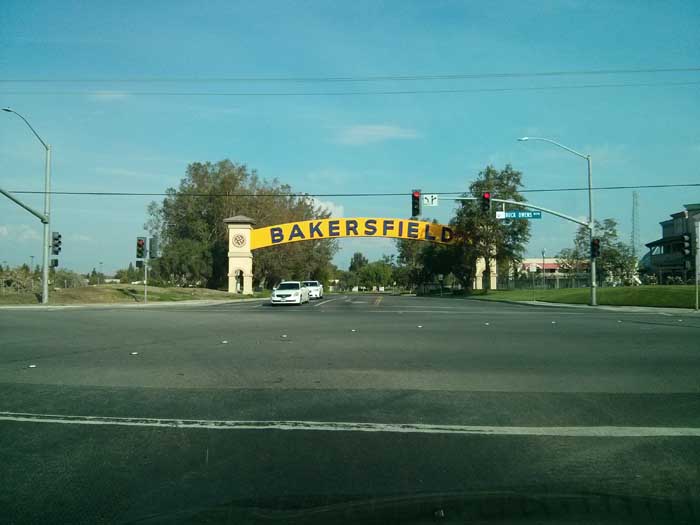 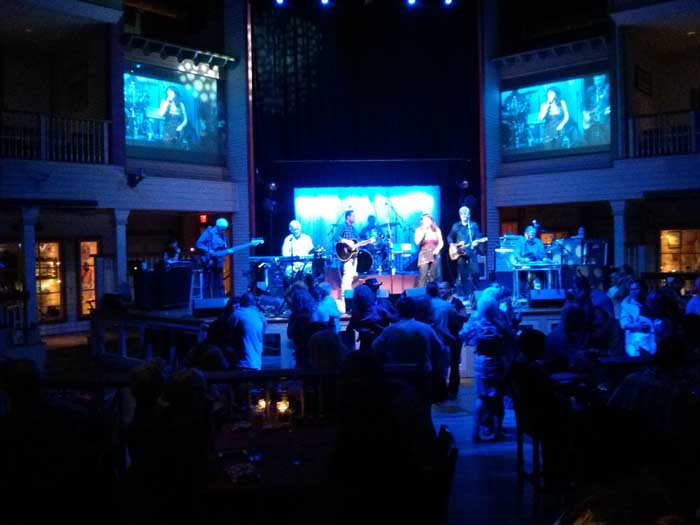 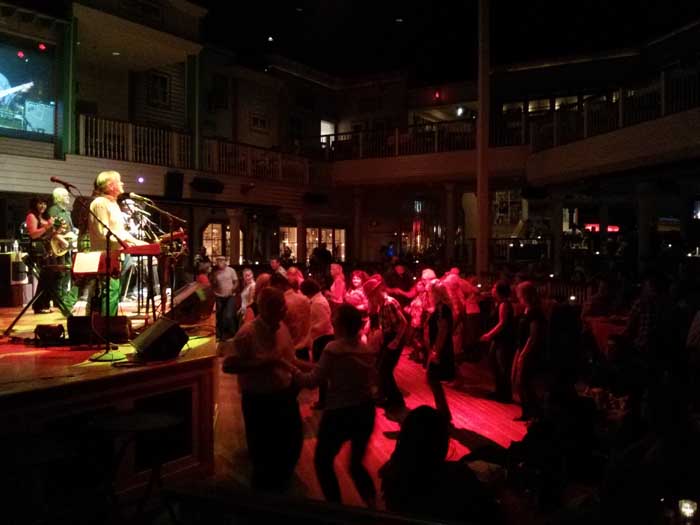 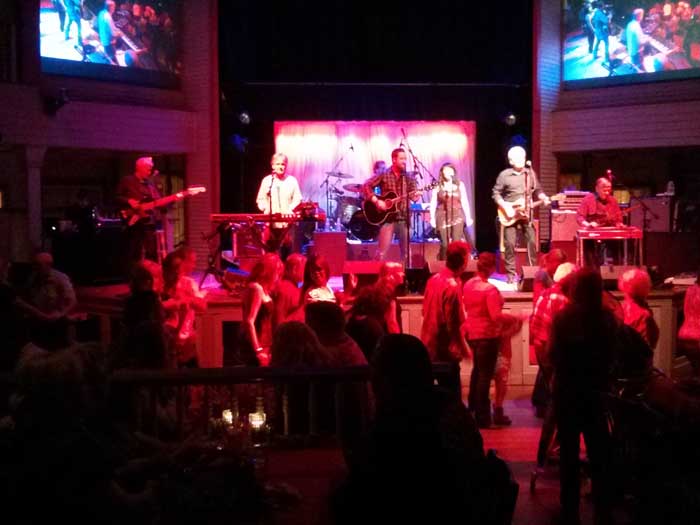 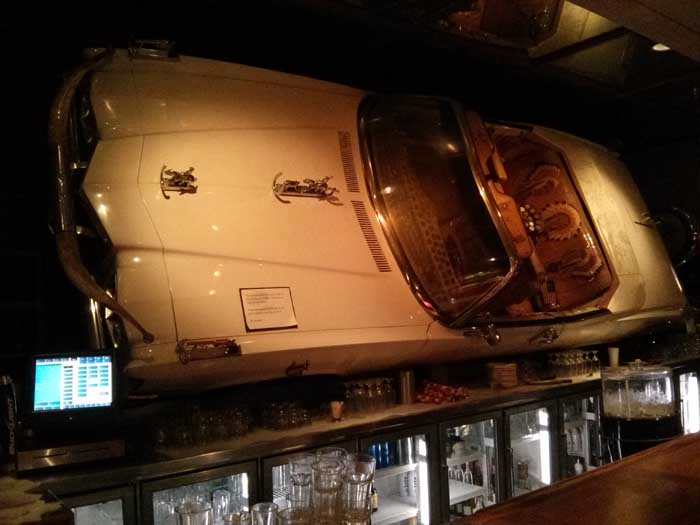 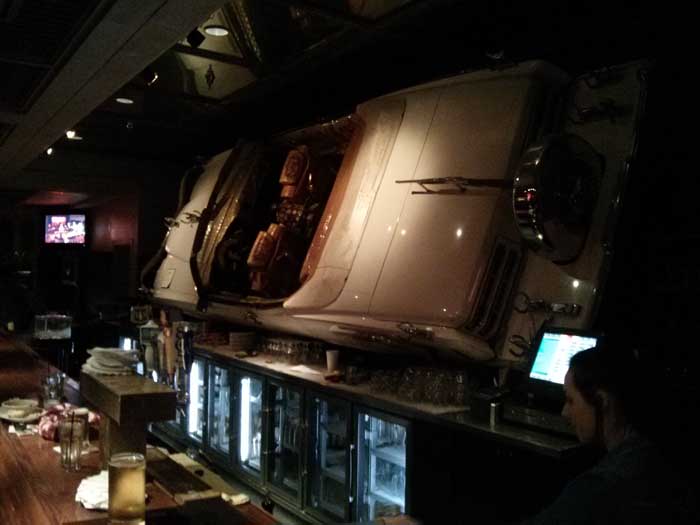 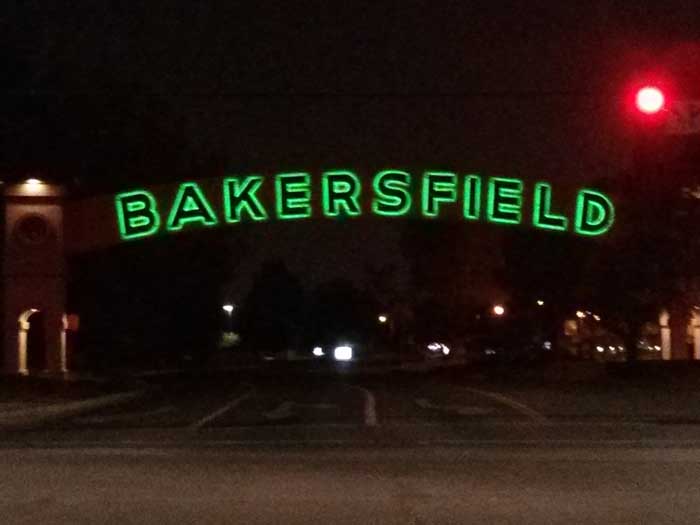 The Buckaroos play for about 2 hours, there’s loads of folks on the dance floor, line dancing to the various tunes. The only song I know is Polk Salad Annie which is not awful by any stretch and reasonably pleasant. Whilst the female lead singer and keyboard player sing Desperado – the second song I know – another band comes on stage, “someone and the Stampede”. Their first song is great, almost rock’n’roll, but then they revert back to standard country style music. I give them a few more songs before I decide I’ve had my fill of country tunes for one night, and head back to the hotel and bed. I can’t criticise the Crystal Palace too much, and although as I said I’m not a massive fan of country music, whichever variant, it was a pleasant evening. At least I got out and heard some different music rather than being holed up in the hotel room or stuck in a quiet bar in town somewhere. On to Sacramento tomorrow…