49ers game day dawns with a bright blue sky and predicted afternoon temperatures of 86º F. Breakfast is good in-room and I undertake the task of re-packing all my dirty laundry from the past three weeks into my suitcase for the trip home tomorrow. Some diary catch-up and then it’s out of the door at 1.20 pm to catch the VTA at the Santa Clara North stop for my first ever Monday Night Football game live, the San Francisco 49ers vs Cleveland Browns.

It’s about a 7 minutes walk to the VTA stop, not just outside the hotel like the Four Seasons was. It’s fine though. I used the VTA app again to buy my ticket, again it worked well. The train fills up with supporters at subsequent stops, me being the first on in downtown. After arriving at Levi’s Stadium I wander around the tailgate more extensively than on previous visits. There are a good few parties underway all over the lots but the ‘main alley’ as I call it in front of Gate B is as mad, raucous and wild as ever. 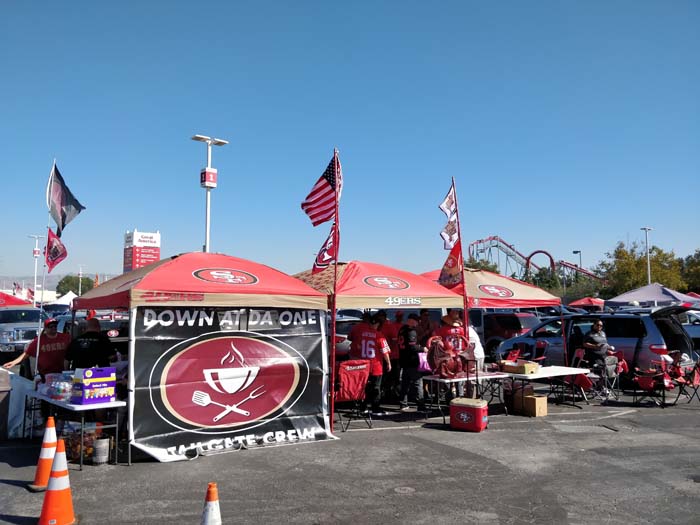 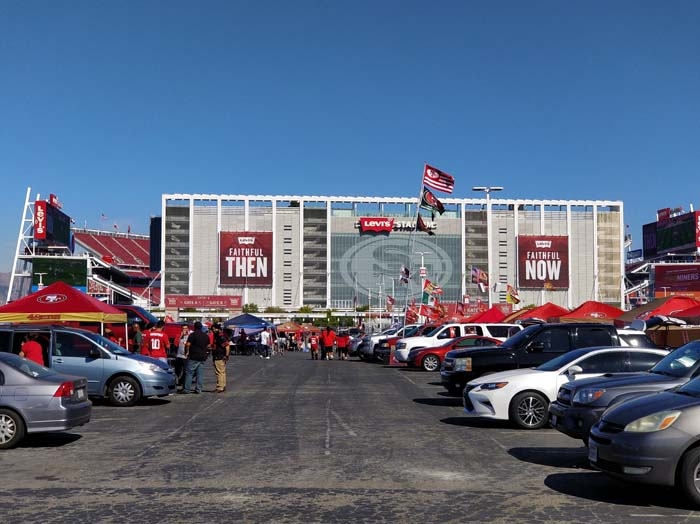 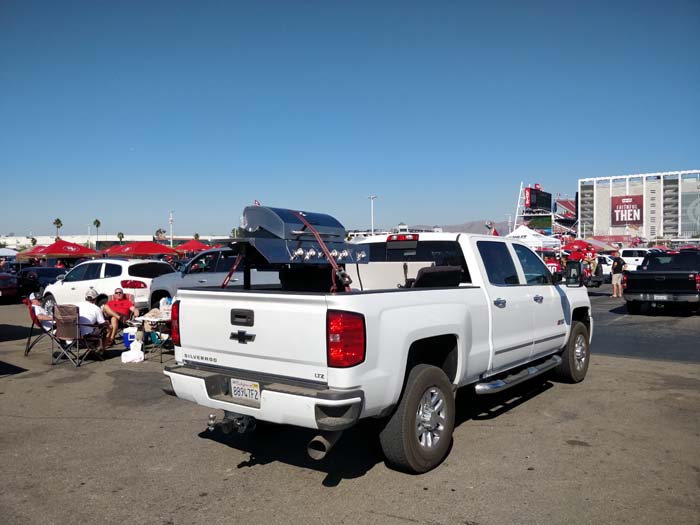 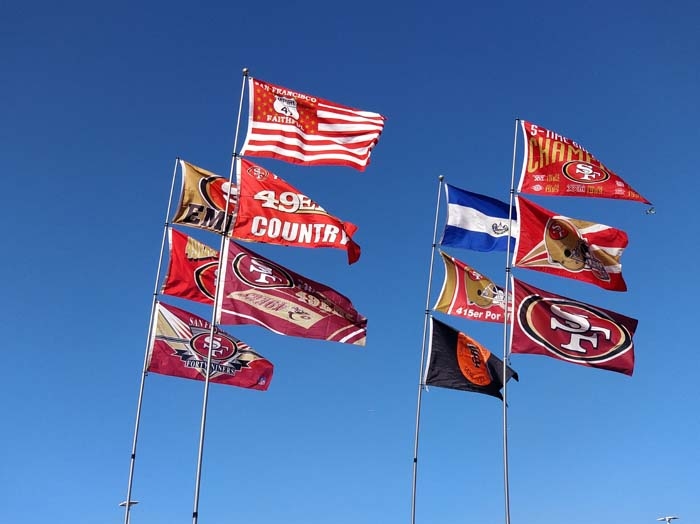 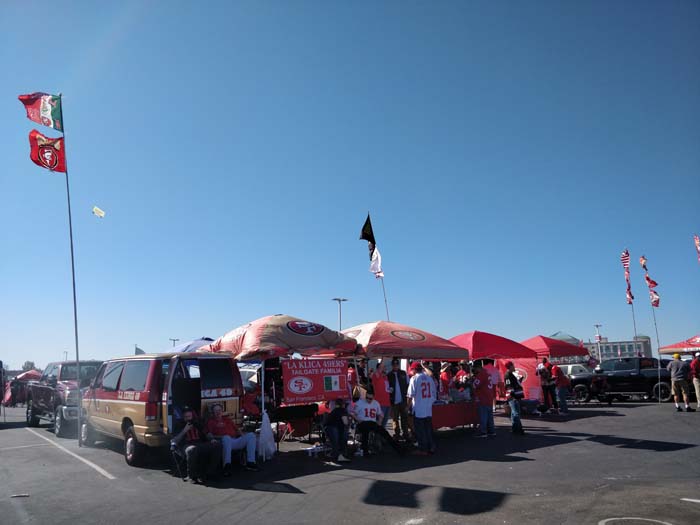 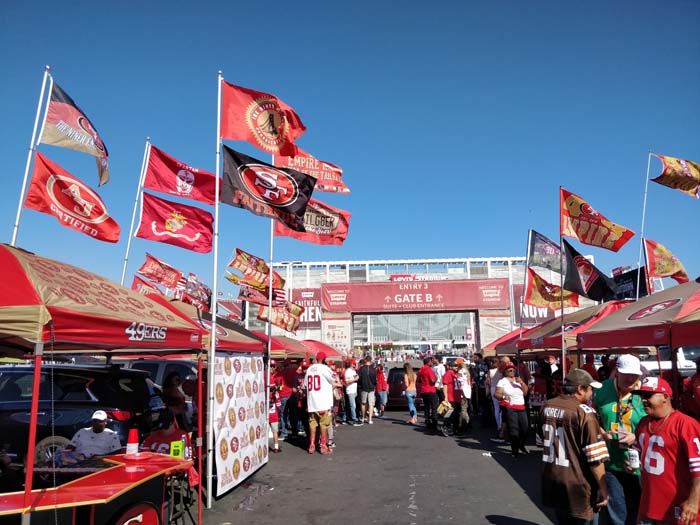 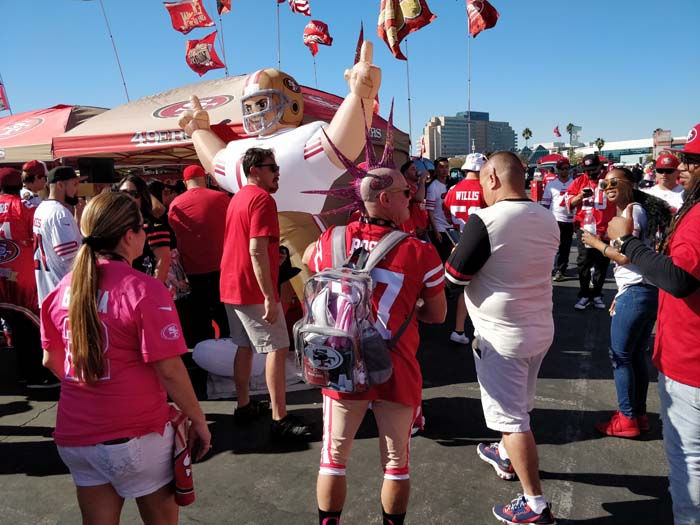 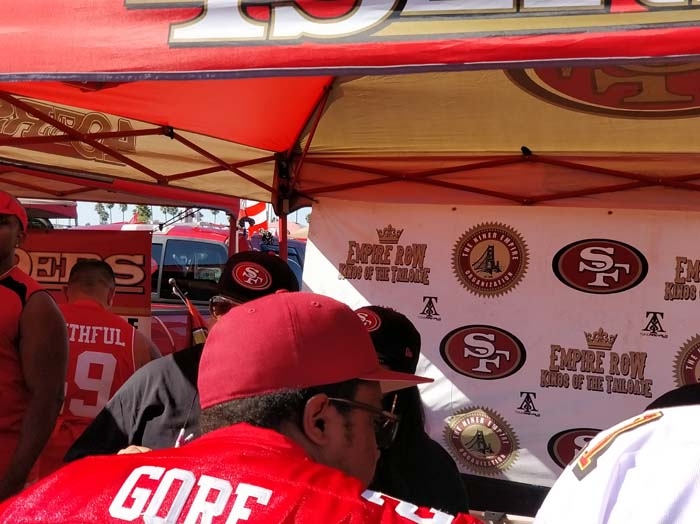 And this time I find a ‘bar’, Empire Row, serving cold beer and other drinks. In return for making a ‘donation’ in their bucket on the bar, they’ll give you a beer, spirits or a cocktail. The bar guy I talked to made it very clear they were not ‘selling’ alcohol. 😉

I asked how much of a donation would be suitable for a beer, and I then donated $2 to their worthy cause. Excellent! The tailgate seems to have the best atmosphere I’ve ever experienced and it really puts me in game mode.

Into the stadium and again there’s a real buzz about the place. To be fair, at each of the games I’ve attended the pre-game atmosphere has always been good, but that soon disappeared when the 49ers played badly as the game progressed and eventually lost. This year will hopefully be different. First off though before ascending to the concourse I visit a new addition to the stadium, some statues of Joe Montana and Dwight Clark that celebrate and commemorate “The Catch“. 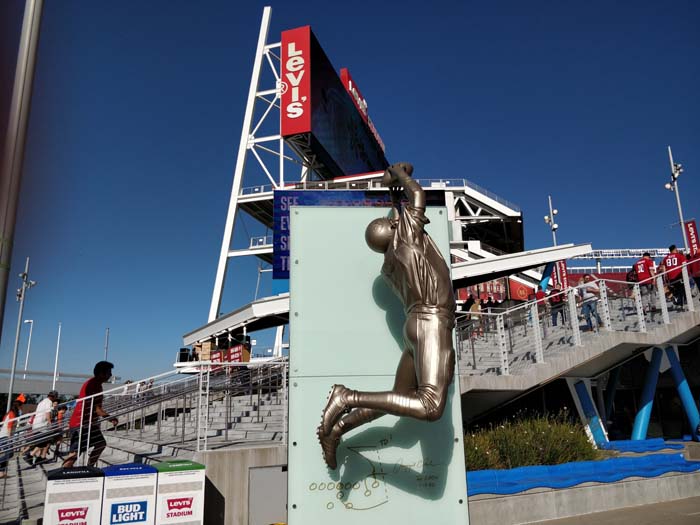 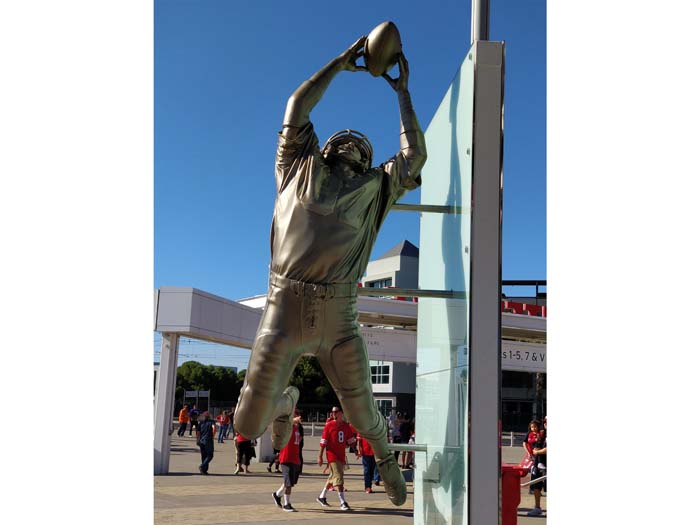 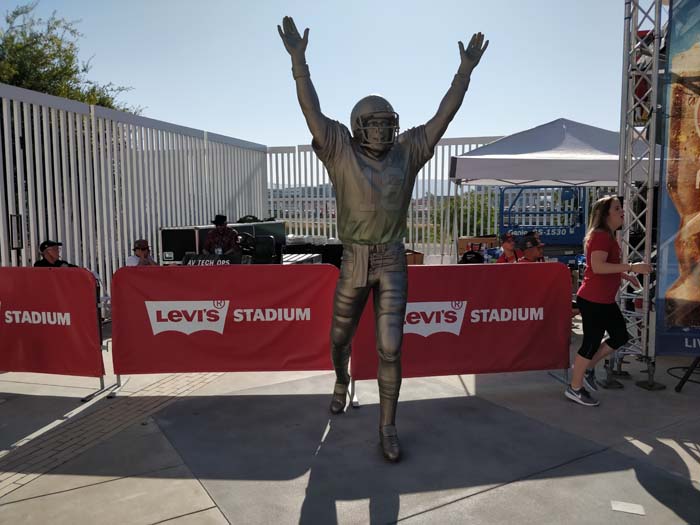 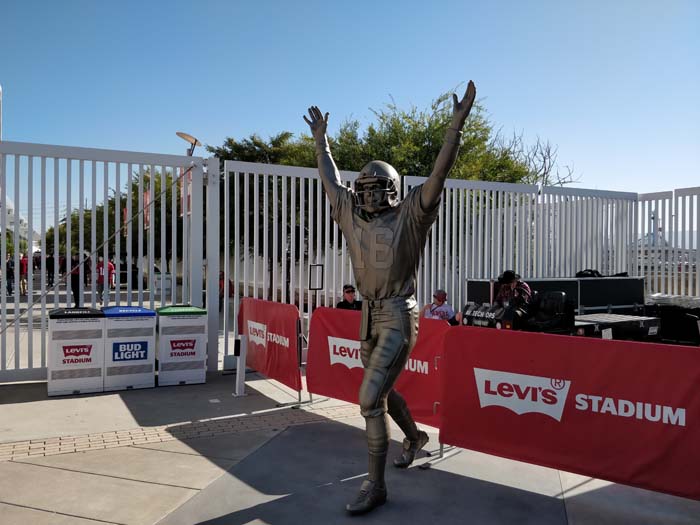 That done, it’s onwards and upwards to the concourse. The walk around it is as invigorating as ever, there’s a sense of real anticipation from the Faithful. Watch some pre-game footage here on YouTube. This year I’m back in the Levi’s 501 Club after a few years – I decided on a change from the United Club this year – but I misjudge the beer queue and I miss the National Anthem and fly past, which was a shame as I do enjoy that part of the pre-game spectacle. I’m just back in my seat to watch the kick-off. 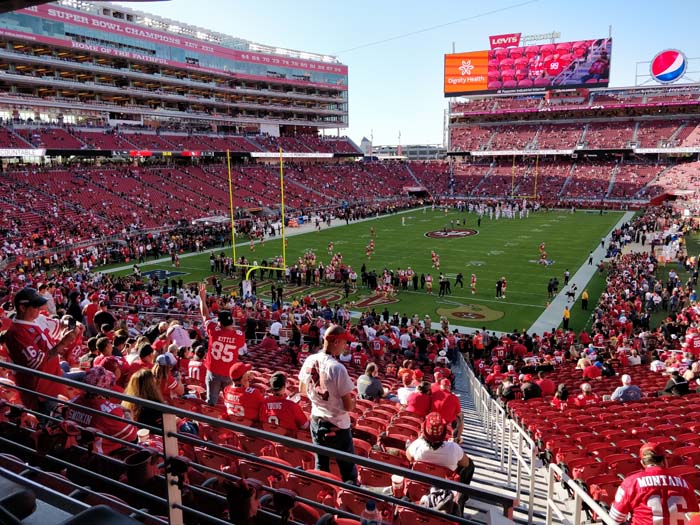 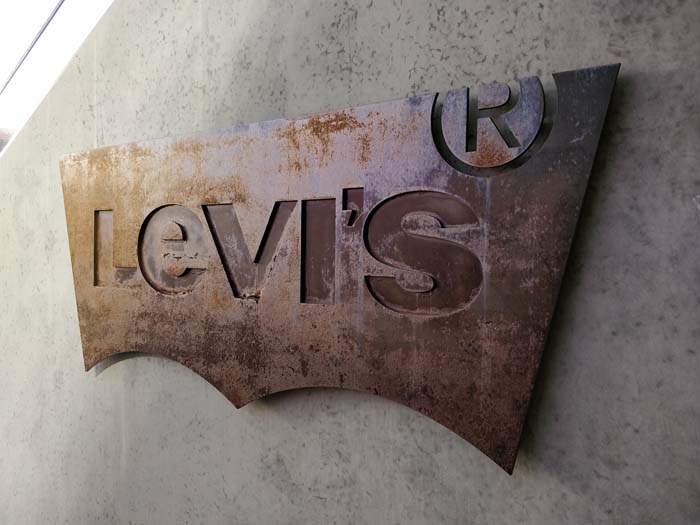 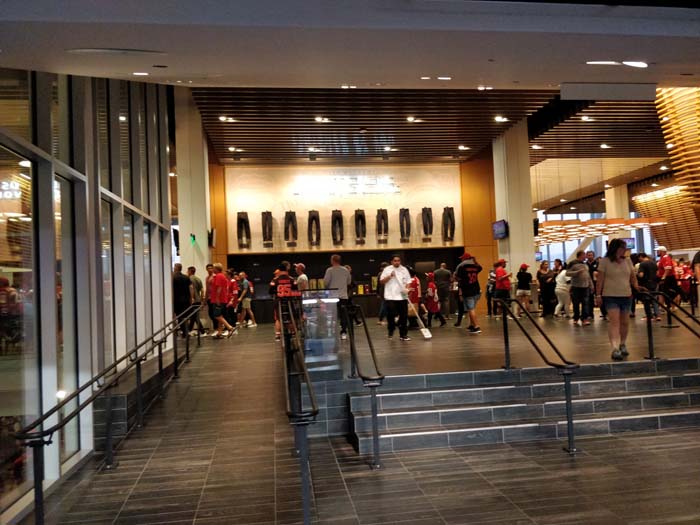 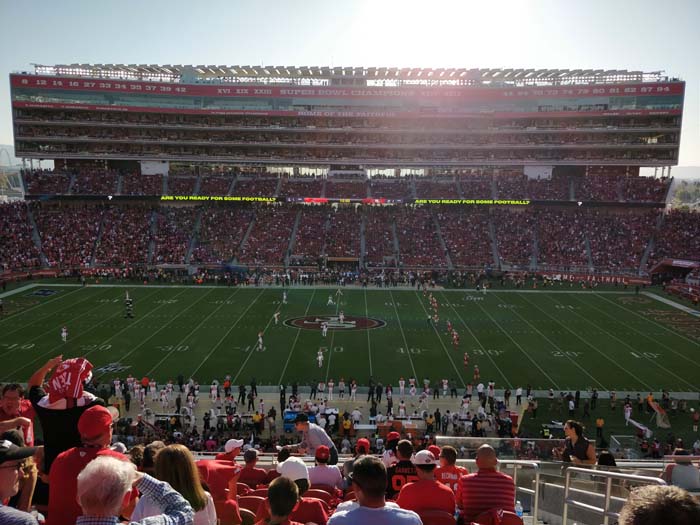 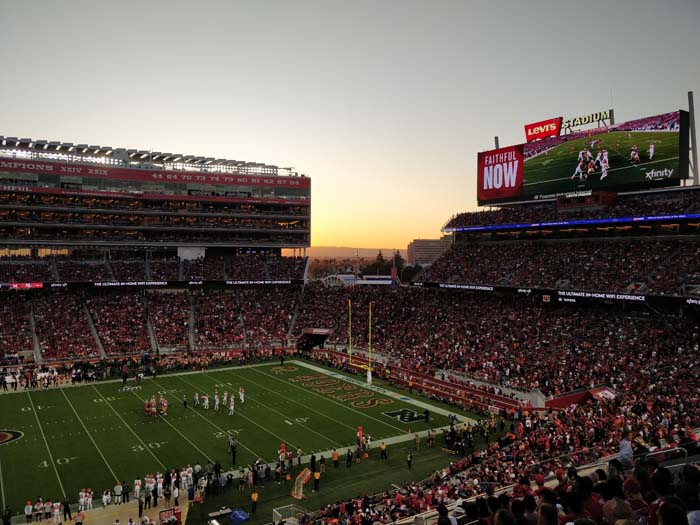 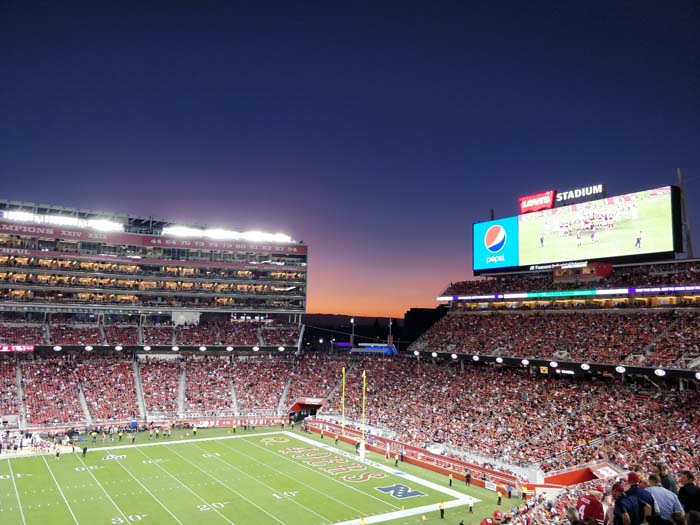 The Team is Looking Good

I have a great seat and view, and Levi’s is as full as I’ve ever seen it. That’s what a 3-0 start to the season will do for you. The 49ers good form continues when they stop the Cleveland Browns opening drive. Our first drive results in an 86 yard touchdown run by Matt Breida, which is followed by another stop of the Browns offense. Then we score again and it’s 14-0. Way to go!

The 49ers are playing great football on both sides of the ball. By half-time it should have been game over and 28-0 but some missed opportunities mean it’s only 21-3. 🙁

With the increased attendance the beer queues at half-time are very long. So I have to wait until the end to grab a beer before going back outside. The 49ers carry on where they left off. This team is looking good, and we eventually win, beating the Browns 31-3. It was a great performance.

At the end of the third quarter I went to get something else to eat. I had a distinctly underwhelming hot-dog on my earlier visit to the 501 Club when I sussed out my seat before the concourse walk-around. There aren’t many food options though, and having taken offence at the price earlier, this time I do buy a Beef Brisket Roll for $18. Eighteen f****** dollars! It is very nice though, but even still – $18!!! For a sandwich.

I’ll go back to the United Club next year I think, or maybe eat on the concourse where there is now a wide variety of food options. It’s still expensive but at least there’s more choice.

Game over and I’ve finally seen the 49ers win at Levi’s Stadium. Hallelujah! In honour of this event, I decide it’s finally time to retire my nearly 30 year old 49ers polo shirt. I bought it in 1992 and it is not red anymore, more a faded dark pink colour. I’ve wondered since I started coming to games, and wearing it, whether anyone would comment on such a retro jersey. And today, for the first time, the bar guy at Empire Row said to me, “That’s an old jersey.” “Bought in 1992” I replied. “Yeah, that’s about when I remember it from.” Kudos. 🙂 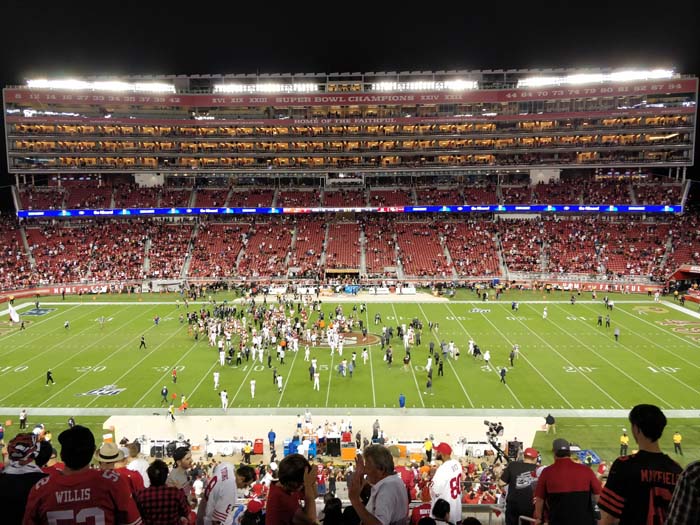 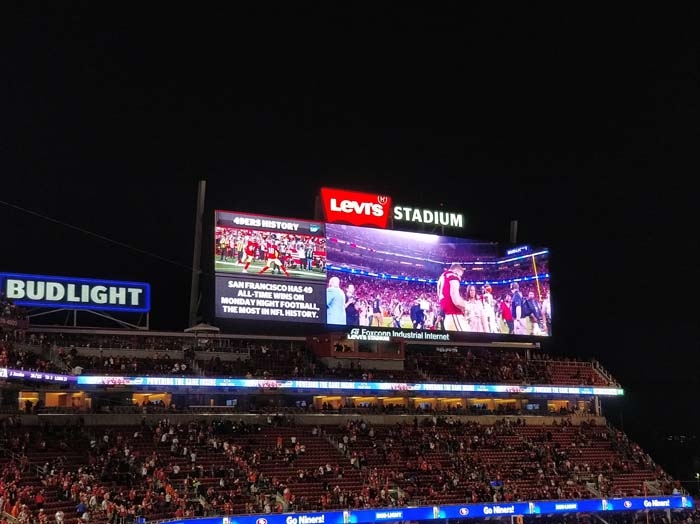 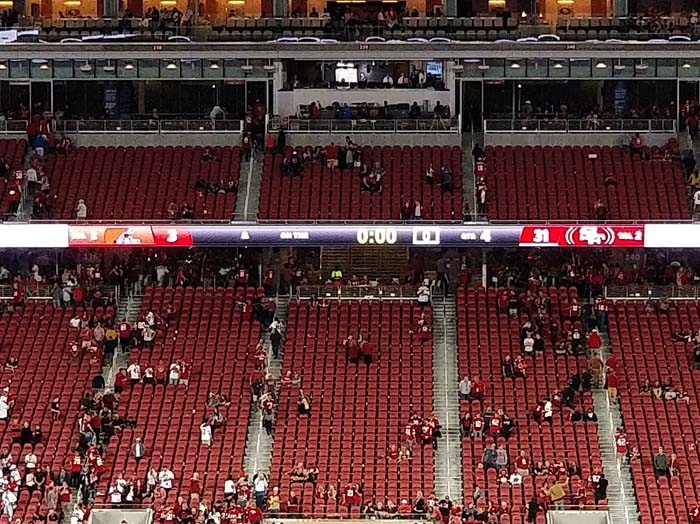 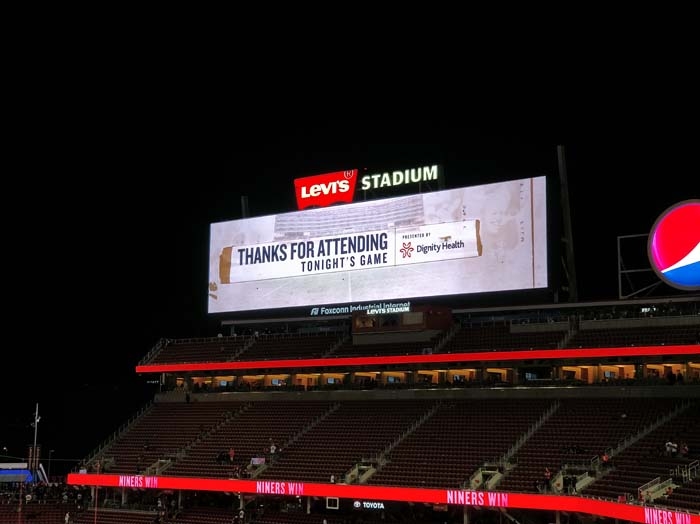 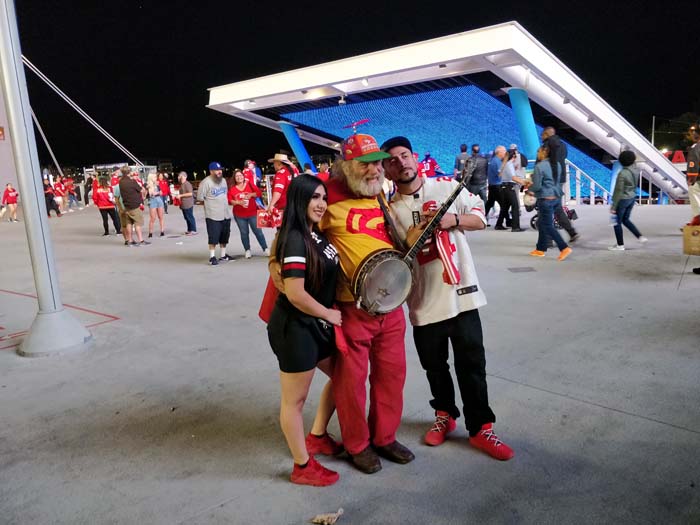 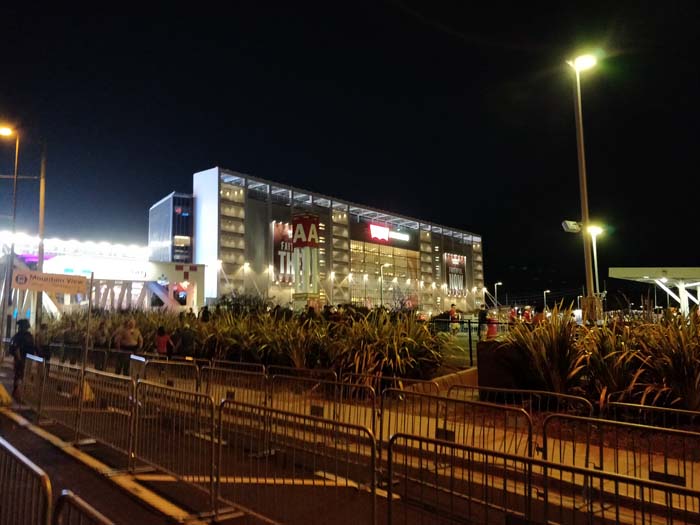 As it was an evening game, I went into the Team Store before kick-off this year to see if there were any polo shirts I liked. Store visits in previous years had not found anything. I found a couple I quite liked but one was $120! They didn’t have my size to try and tempt me thankfully. The other was good but I wasn’t sure about the material. I wanted cotton but they haven’t had cotton polo shirts in years. This one is ‘only’ $55 but that seems good value when many other shirts are $80-plus.

So post-game I head back to the Store and buy it. Hopefully it will serve me as well as my current one. The return to Downtown San Jose is not as quick as previous years. An hour after the game and there is still a queue for trains. The consequence of a successful team I guess.

But it’s only about a 10 minute wait before a train turns up. Luckily I have a choice of two lines, staying Downtown as I do. I get off at San Carlos South and walk back up Santa Clara St and I’m soon in O’Flaherty’s Irish Pub. It’s very busy for a Monday night but it doesn’t seem like a football crowd. And it’s not. Sadly, it’s karaoke night…

Everyone is immersed with their own friends so I sit at the bar and reflect on a great day. This small area of San Jose, San Pedro Market, has got lots of good and varied bars. This could be my future base I think, but the Hotel De Anza is very expensive. I work out later back home that with taxes the average over two nights is nearly $300 a night! And that’s without breakfast or parking. The din of the karaoke starts to grate and eventually overcomes me after a beer or two, so I decide to leave. Back at the hotel, a bit of diary then it’s lights out. Great day!