It’s my longest drive of the trip today from Bakersfield to Sacramento, about 280 miles, so I’m on the road by 10.20 am. Breakfast in the hotel was included in the room rate and was the usual US hotel type stuff such as cereals, waffles, bread etc., but it was good. I’ve only had two “7-11” breakfasts so far, both in Dana Point. The Holiday Inn Express & Suites here has been good and it was a good rate when I booked direct on their website before I left the UK.

It had rained recently overnight – the ground was still wet – and it’s overcast as I drive off. And it’s cool! Only 67º F, a welcome respite. The road is still a 3 lane freeway at this point and the road is quiet, but it is a Sunday morning. This is farming country, mostly crops from what I can see but also cows for milk and beef. There are lots of roadside signs put up by the farmers saying they need water to grow food, which is all to do with the current California drought. I see some mega-trains for the first time this trip and various large grain silos, warehouses and processing plants. The only crops I can discern are olive trees – a number of side roads are named Olive Avenue and Olive Road – and I see signs promoting this, as well as citrus images on buildings. Nuts also appear to be a big crop as I continue to drive up Hwy 99, almonds and pistachios are frequently referenced. I think I see vines and they like grape jelly in the US so it’s possible but they don’t look like proper vineyards or wineries.

Around the towns I see the usual malls or just gas and food places, and then I’m out in the country again, and this pattern repeats as I head north. Hwy 99 keeps out of the towns though, always bypassing them, so there’s not much to see other than the farming fields and their infrastructure. I pull off Hwy 99 near Merced and find a Burger King for lunch but it’s the worst run place I’ve ever been in for that franchise. There’s a really long wait for my food, there’s no food in the hot waiting lines, loads of customers are standing around as order numbers are shouted out, one family has their order completely forgotten, the toilets smell, there’s no clean paper towels but there are dirty ones all over the floor – this place should be shut down, it’s disgraceful. The burger was, eventually, OK though.

From here to Sacramento it’s more of the same, two or three lanes each way, pleasant views, bypassing towns and malls, then fields again – and the sun’s come out, with blue skies and fluffy white clouds and a temperature that’s climbed to 78º. It’s been a nice drive to just get in the car and just go, observe what’s around, but there weren’t any ‘wow’ moments around every corner. Not that there were any corners as Hwy 99 is for the most part as straight as an arrow. Yet again though, it was a different day’s drive from every day so far, and none the worse for that. It’s not a drive I’d want to do every day on a road trip, but it’s all part of the trip and today I just needed to get from A to B. 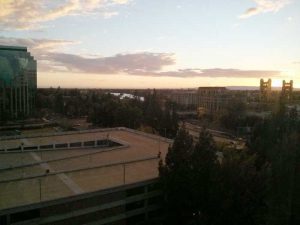 The view from my hotel room overlooking downtown Sacramento at sunset

I find my hotel, the Holiday Inn Sacramento Downtown – Arena, in downtown Sacramento but there’s no breakfast in my rate so I go back out for supplies after checking-in. I discover a proper 7-11 (Dana Point was just a random supermarket) down the street and stock up for tomorrow morning.

I’d asked the car valets earlier about Old Sacramento and they told me that it shuts down early on Sunday evening so I should go out around 5 or 6 pm if I want to eat there. This sounds surprising to me but I guess they should know? Well, I decide to leave the hotel at 7 pm and take my chances. The old town is just under an underpass about 5 minutes away and when I get there I immediately spot see the Sports Corner Cafe, and whilst there aren’t many people on the street, the place is open. I ask the barman about the early closing and he tells me it’s a load of bollocks, they’re open until late and serving food until 10 pm. Just goers to show local guys don’t necessarily know anything. They’ve probably never even been to Old Sac! Anyhow, the bar’s quite empty and I’m sitting on my own at the bar so I just watch football and baseball on the TV. I eat some good wings and fries. The barman is friendly but after a long-ish drive I go back to the hotel around 9 pm to relax in my room for a while before lights out.

PS. The Café closed a couple of years ago but as of March 2021 it appears it might get a new lease of life.