Arrival In The Rust Belt

You are here: Home1 / Ohio, Nashville & Texas2 / Arrival In The Rust Belt

To The Shores Of Lake Erie

I’m on an earlier flight than last year’s trip – leaving the UK at 11.30 am – which means an 8.30 am taxi from home. But the traffic is light and I arrive at Heathrow Terminal 3 by 9.15 am. It’s been a few years since I flew out of Terminal 3 but I don’t notice much change. I’m flying with Virgin Atlantic this year, as they were cheaper than BA plus given all of BA’s troubles over the past year I thought I’d give them a miss.

The plane boards early and we’re on time, and it’s an uneventful flight as we near JFK – the best kind. But then we get hit by air traffic delays and start circling over Long Island. We eventually land 30 minutes late. It’s not Virgin’s fault but the pilot is very apologetic. Immigration is OK and I find the gate for my connecting flight to Cleveland. And discover there’s a 1 hour delay. Great. Which gets even longer and we finally take off 1¾ hours late. 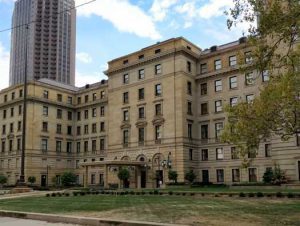 On landing I thankfully collect my rental car quite quickly and am soon on the road to downtown Cleveland in the pitch dark at 10.45 pm local time. On the Interstate however the car feels a bit weird, very skittish when I change lanes, almost unstable at times. But there’s nothing I can do now other than just get to the hotel. On arriving outside the Drury Plaza Hotel Cleveland Downtown the security guard at the front door advises me to park in a public garage across the street for $10, rather than use the hotel’s valet parking “deal” of $24. So I check-in, return back outside and go and park the car. The garage is fine – a couple of minutes walk if that – and I get back into the hotel at 11.40 pm and head to the bar.

A Drink At The Bar

I asked the barman on my way out what time he closed and he said midnight. So I’m in plenty of time I think, so ask for a drink – whereupon the self same barman tells me he called last orders 10 minutes ago and he’s closing up. WTF? He was talking to two young ladies at the bar as I entered but after telling me he’s closing he then does actually walk towards me and ask me what I want. A beer is ordered and I ask to sign it to my room. “No”, is the reply. No explanation is offered. “Why?” I ask. “Can’t do it” he replies. Huh? The next thing I know one of the ladies says “Don’t worry, I’ll get it” and swiftly gives the barman a $10 bill! I’m so taken aback that before I know it she’s been given her change and I’m thanking her profusely.

I’ve no idea why she did it, but it was very generous of her. Maybe she heard my accent and took pity on me… I ask if I can sit with them and we then start to chat, me mostly to her friend because I was on the other side to my ‘buyer’, about all sorts of stuff. It turned out to be the friend’s birthday and they leave at 11.55 pm because my benefactor wanted to give her best mate a present on the stroke of midnight. Sweet…

So I finish up my drink after they’ve gone and head up to bed after a very long day. I’ve been up for 22 hours in total by the time I switch the lights out. But I’m back in America and the next road trip and adventure has begun!