A Trip Around Lake Tahoe

I wander down to check out the food options for breakfast as the receptionist had said the American Café served a good one. Well it might have been but it was expensive, $4 for a fruit juice, $3 for tea and I could see it ending up around $20 for not a lot. So I decide to have my “International Breakfast” that is part of the room rate. The inclusion of this was a special and did not entitle me to go in a restaurant, it’s a continental-type breakfast that I can only have it in my room via room service. Last night on check-in when it was explained to me it sounded a bit cheap and smallish, but on reflection this morning I decided I maybe wasn’t that hungry so would give it a go.

So I go back to my room and order it at 9.40 am and it arrives 10 minutes later – not bad! And it’s just right in fact: juice, fresh bowl of fruit, muffin and coffee, all larger than I really need so it fills me up.

In deciding the route to South Lake Tahoe & Stateline yesterday one of the Rangers had said that Hwy 50 might be closed so to check it out beforehand. I found the CalTrans website last night with mountain road conditions listed and it said Hwy 50 was open but that Hwy 89 was closed in two places. And one of these was on the round trip around Lake Tahoe I had planned for today. So no round trip today then, as the website says it’s still closed this morning. The status said “Due to storm” and I assumed it meant snow but whatever it was didn’t matter, and I have to re-plan my route. I decide I’ll have to go around the Lake the ‘other way’ as far as I can and then re-trace my route, doubling back. Not the best but as before, you just need to get on with it.

I plan to drive to Tahoe City and resolve to call in the Tourist Office just down the street before setting off to see if they think this is a good idea. The lady in there was very helpful, thinks it’s good, and so we agree on that. She also tells me it’s not snow that caused the Hwy 89 closure but the storm caused a fire and they’re clearing it up. She thinks it might be open tomorrow when I enquire, so fingers crossed. On the positive side there’s a bright blue sky outside with a few clouds, but no rain. 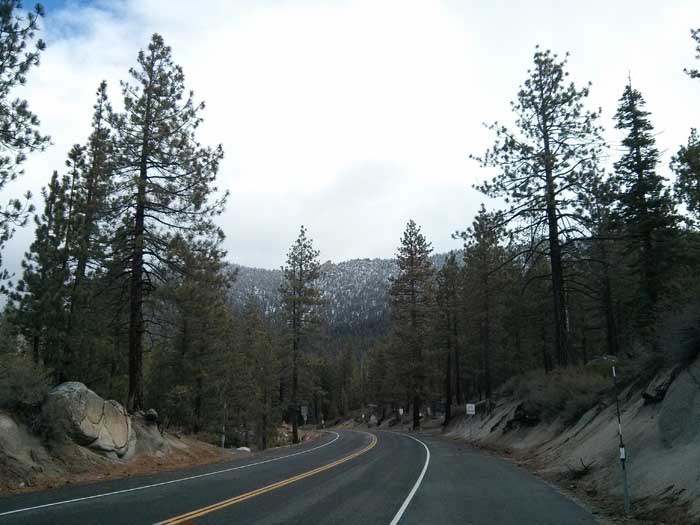 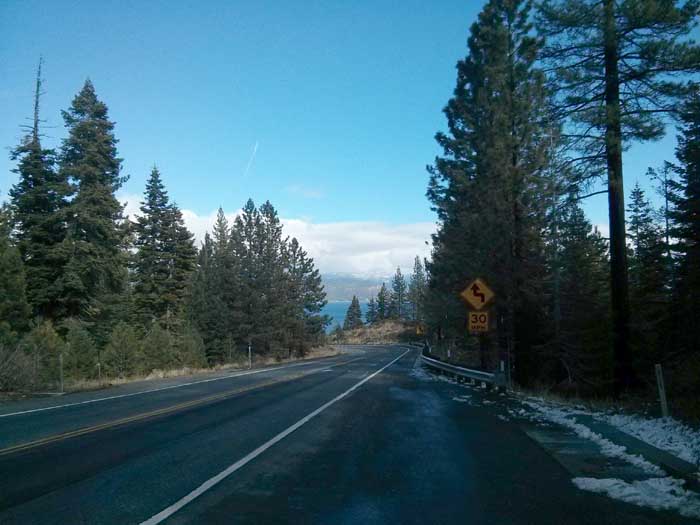 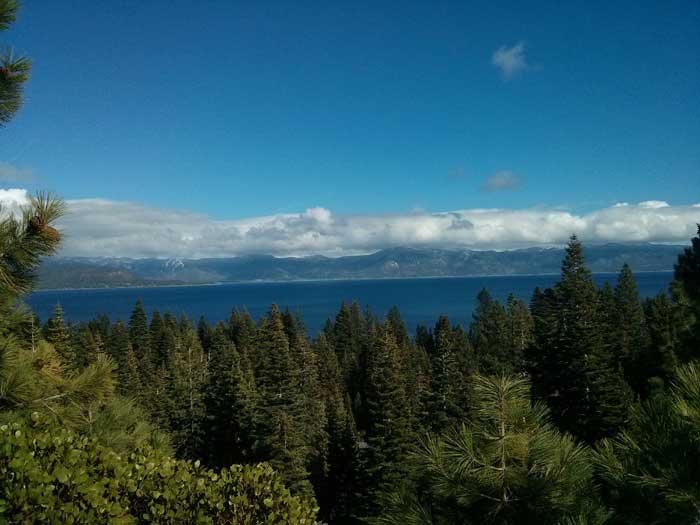 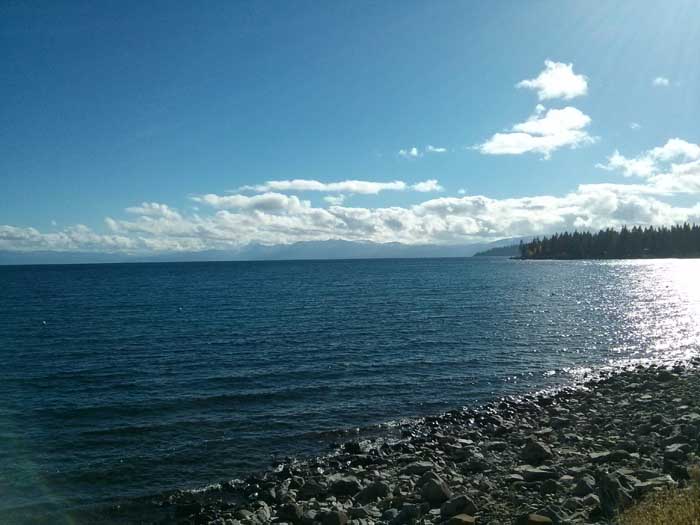 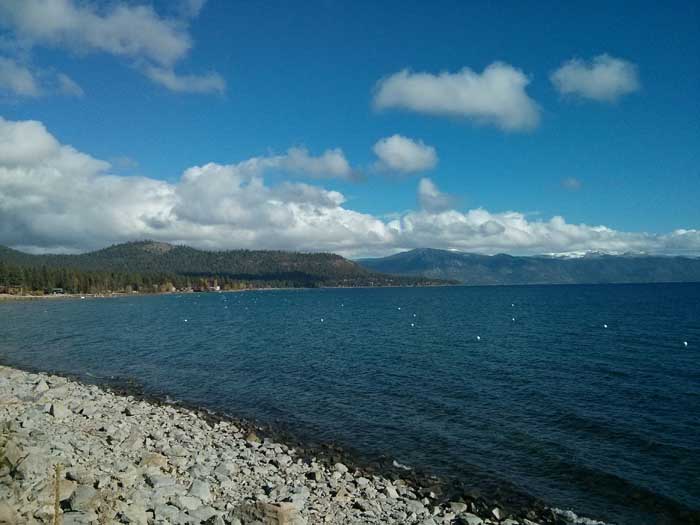 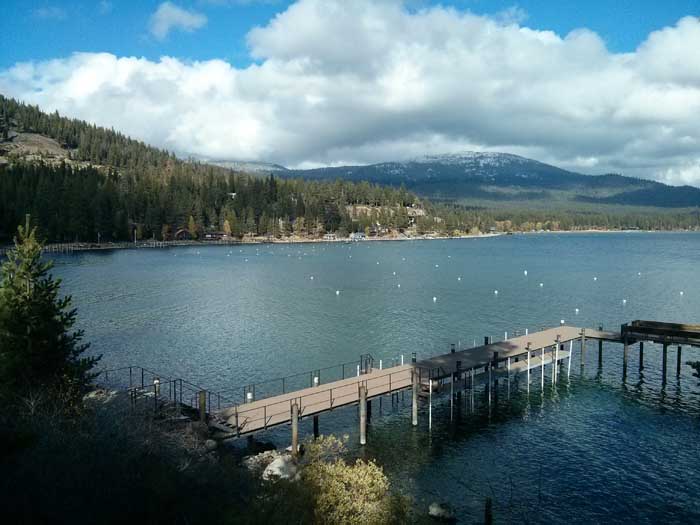 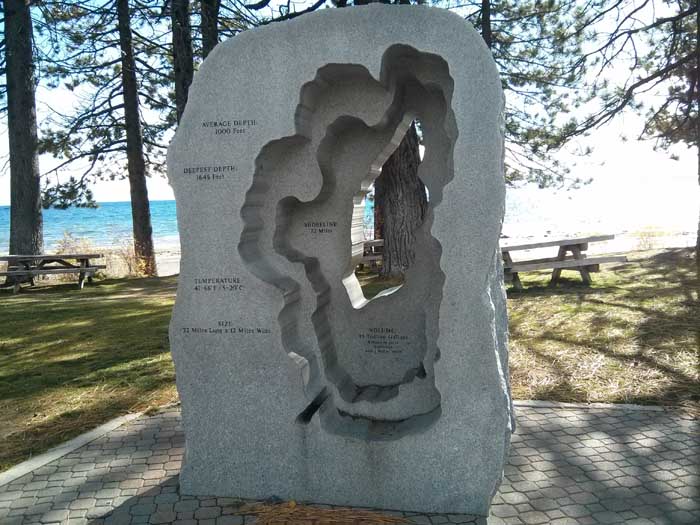 I arrive at Tahoe City at the top of Lake Tahoe but decide to carry on around a bit further as I’ve got plenty of time to spare. I left the hotel around 11 am and it’s still only around midday now. So I carry on driving and end up going a bit further than intended and I realise I can’t be that far from the other end of the closed section, so I turn around and start to head back. This section of the road is in the forest so I can’t see much of the Lake, so it’s OK in places as a drive but not brilliant. I can see hundreds of huge pine cones on the forest floor as I’m driving along so I stop by the roadside to pick up two to take back home. They’re that big though I’m not sure how I will get them in my luggage!

Arriving back in Tahoe City I visit the Gatekeeper’s Museum, which has some history of characters involved in Tahoe’s past. It’s a small place but reasonably interesting. I have a walk around outside across the Lake’s outlet and sluice gates that controls the water outflow. It was fascinating to learn the how and why involved with this from the various info boards placed around. I then walk up into the town itself to browse and take a few photos. It’s quite a cute little town. Then I head back to the car and drive a short distance up the road to stop at a Safeway to buy some lunch, and then eat it in the car park.

After that, and back on the road again, it’s drive-stop-drive as photo opportunities arise every few miles. I pause a bit longer at King’s Beach to walk on the sand and up to the water’s edge. After this there’s a couple of signposted vista and outlook points to stop at, plus I do my usual ‘bandit’ stops in turnouts. The weather has thankfully turned out nice and it’s still blue skies with a bit of white cloud but quite chilly at 47 degrees F. 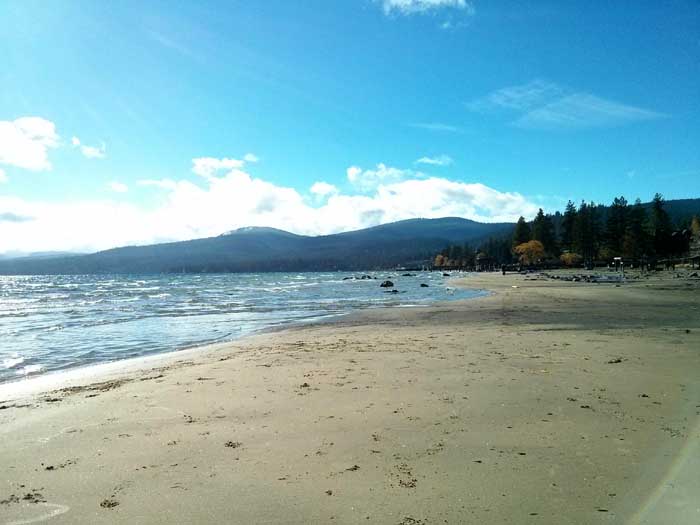 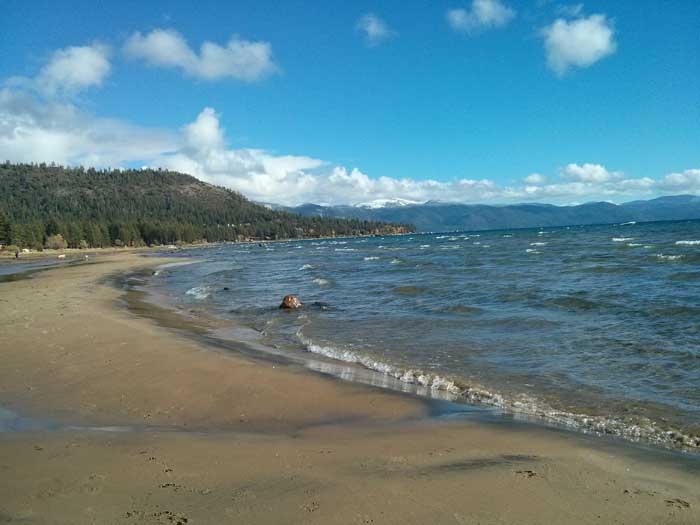 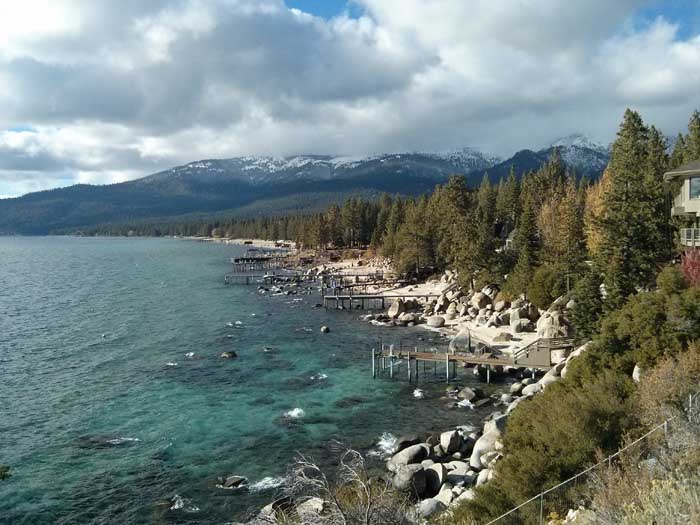 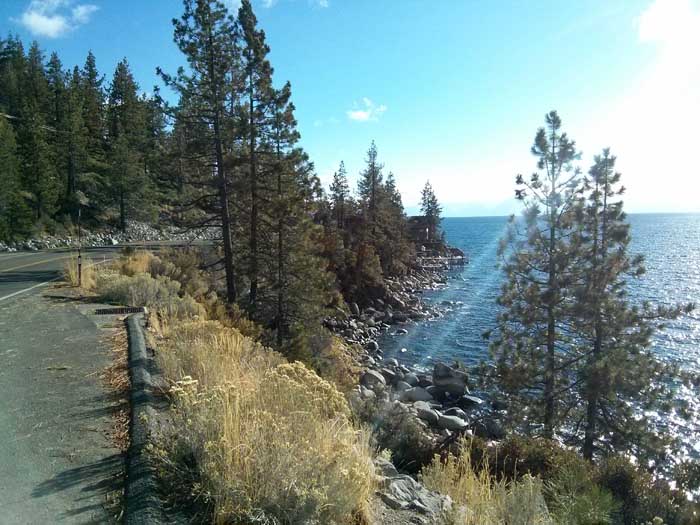 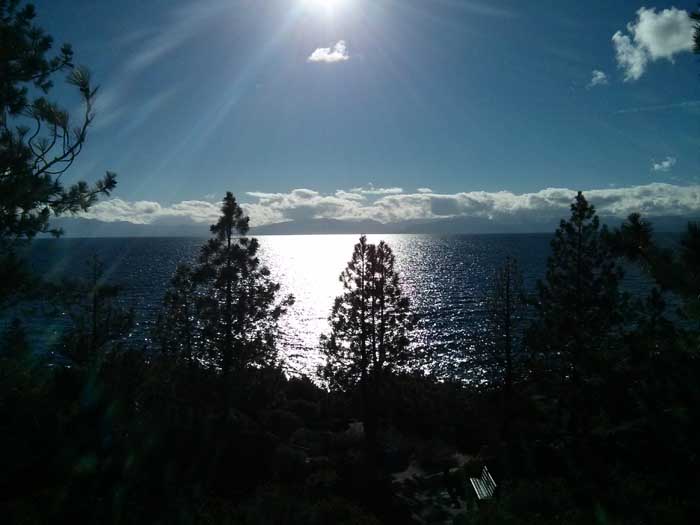 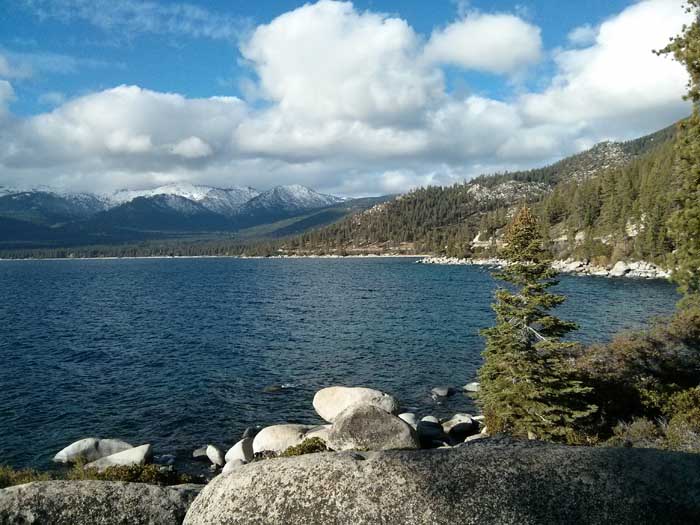 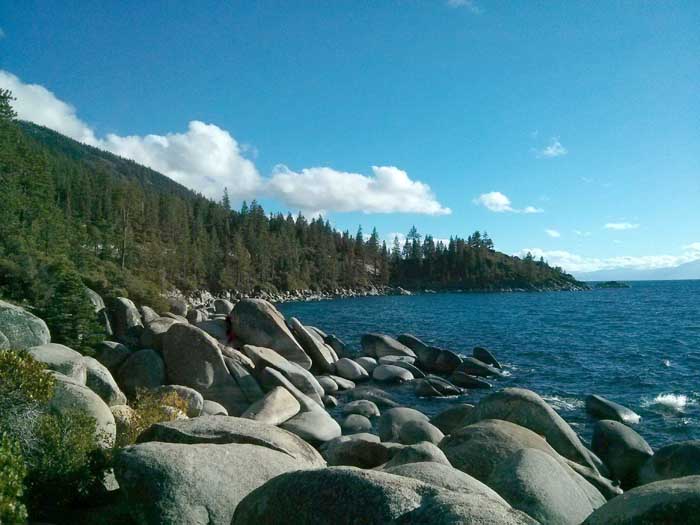 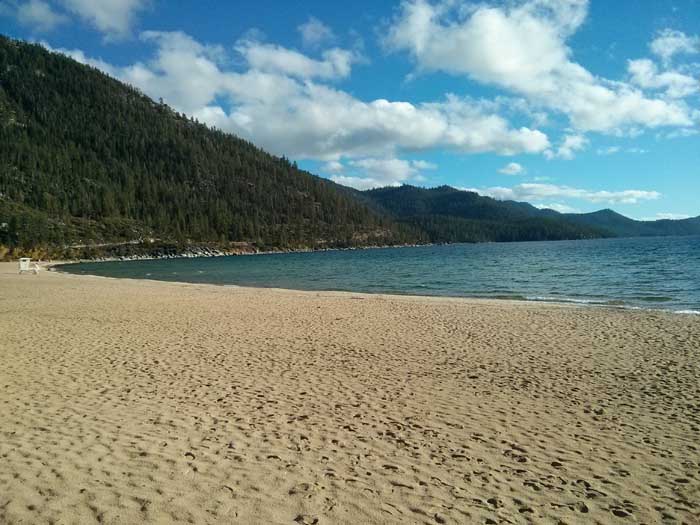 And the drive? In places it’s stunning, in others just OK and average. The closed-off section didn’t bother me once I got on the road so I can’t comment on what a proper round trip would be like. But it’s certainly a great drive overall and there are some beautiful sections and views. Plus the road is challenging in places, with good concentration always required. It’s well worth a visit. And just like the Pacific Coast Highway there’s no safety barriers on many sections. So this kept me focused on not plunging 300 feet into the Lake. 🙂

There’s not a lot to do around the Lake – unless you’re on vacation for the water activities or beaches of course – other than enjoy the scenery. The museum was about the only ‘place of interest’ I found to visit other than shops and restaurants, which was a bit of a surprise. Anyway, given the previous few days, it’s good, despite the closed section of Hwy 89, to actually get some good driving in, in good weather.

Back at the hotel I assess my dinner options and decide on the Lucky Beaver Bar & Burger next door. It supposedly has great burgers, so it’s worth a try. It’s quite busy when I arrive but manage to sit at the bar, and the barman suggests some good draft beers throughout the evening. I do have a burger and it is very good, as are the fries. I then move from the bar to a table to write up my diary as the bar had a curved edge and it’s easier writing on a flat surface. Being so down about the trip over the past few days I decided not to bother with writing a diary this time. But, as my mood improved today, I picked up the pen again and now have a few pages of writing to catch up on.

After more beers and a Makers Mark nightcap, and lots of writing, it’s time for bed. There was not much banter in the bar but it’s a good place and I’d recommend it.