You are here: Home1 / Coast To Coast2 / A Town Called Chamberlain

Bright blue skies and sunshine greet me as I open the curtains. Breakfast in the hotel is average, but at least it was edible. In looking ahead to today’s drive last night, I noticed my route takes me right by Sioux Falls. This city had come up as a potential stopover or worth a visit on some of the package driving tours I researched to decide my own route. Why I then forgot about it, I don’t know. A detour into the city adds only 5 miles onto the day’s drive though. So I thought that if I made good progress, I’d go and see the Falls, have lunch there and hopefully still get to Chamberlain in good time.

Despite the blue skies it’s only 55º F as I pack the car up. I set off at 10.10 am and I-90 W is as traffic free as it was yesterday in the latter part of the journey. The speed limit here is 70 mph and almost everyone is doing 75 mph, so progress is swift. The scenery is flat, farming country. More grain silos scatter across the landscape, as do 100s of wind turbines, scarring the horizon. The road is generally as straight as an arrow and there’s not much to see. 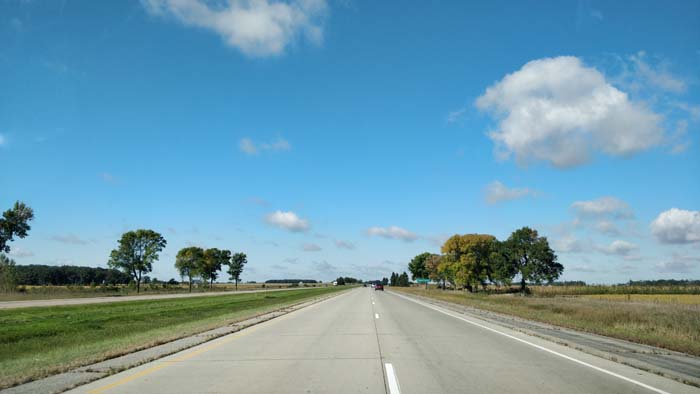 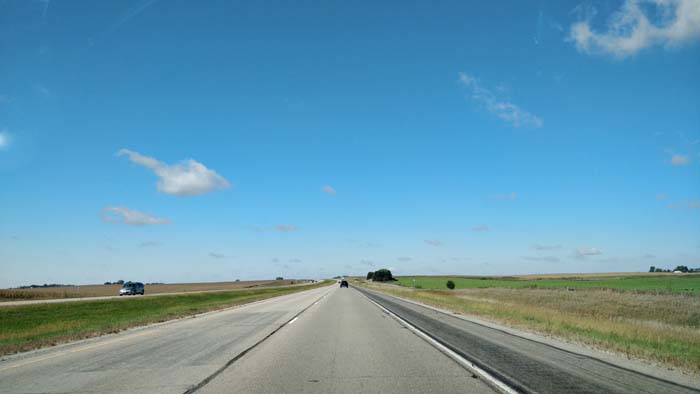 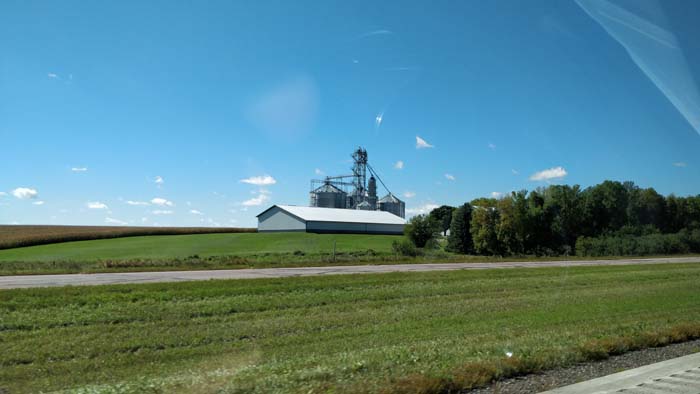 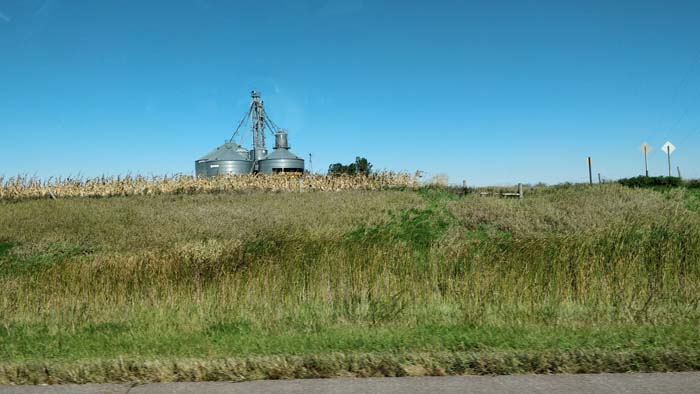 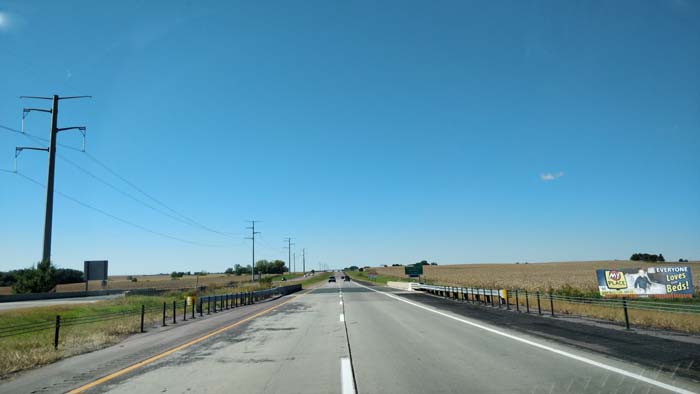 230-odd miles later, Maps guides me to Falls Park in Sioux Falls, the city, at 1.30 pm. I realised earlier in the day that, despite a full tank last night, I won’t have enough gas for the day’s journey, so I fill up again in Sioux Falls on the way to the Park.

I wander around the Park, seeing the Falls from various angles and vantage points. You’d have thought I’d had enough of waterfalls after Niagara Falls but these are very different. They are quite famous in the area and it’s a nice detour, I’m glad I saw them. I eat a ham and Swiss sandwich I got at the gas station in the Falls Park car park, overlooking the Falls. Ready to roll again, I set off at 2.40 pm, which was a bit later than I planned. But as I said, the Falls made a pleasant break on a long day at the wheel. 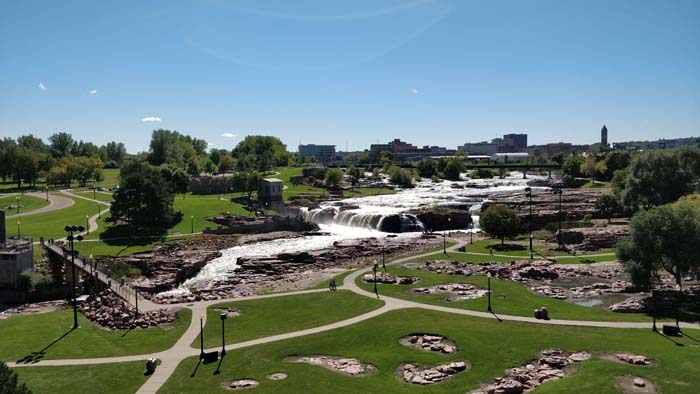 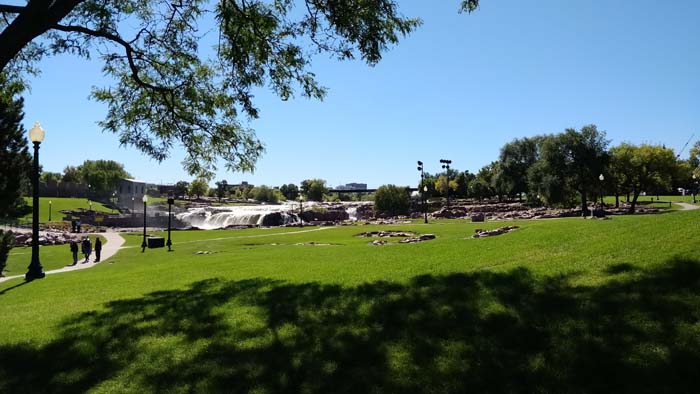 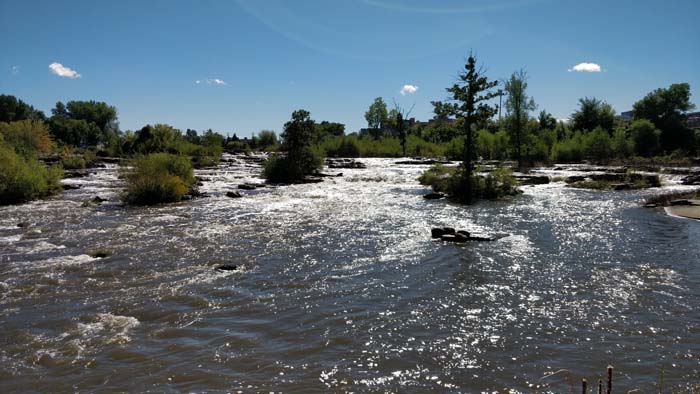 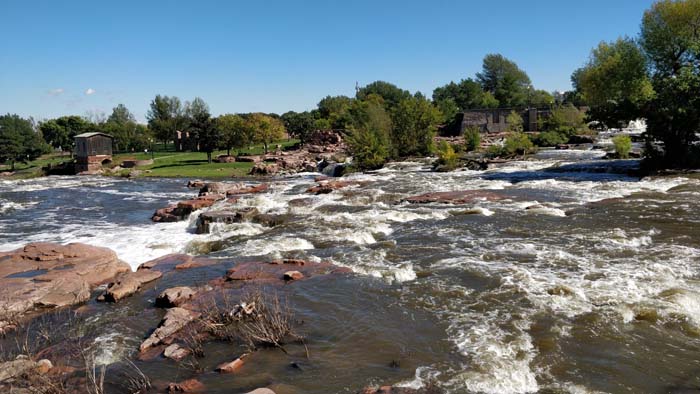 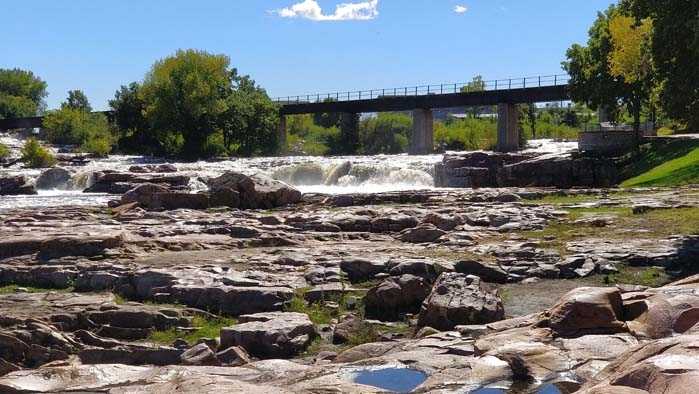 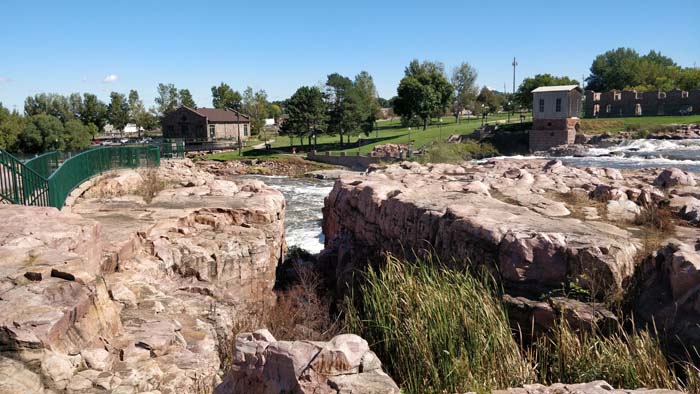 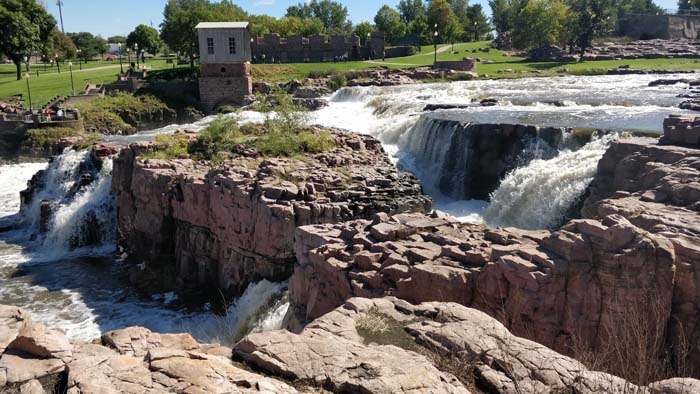 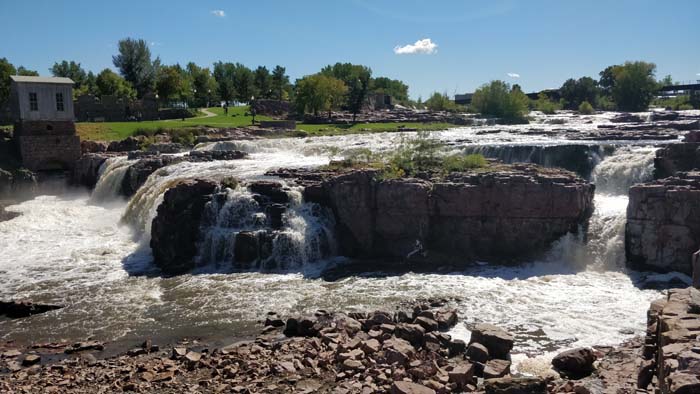 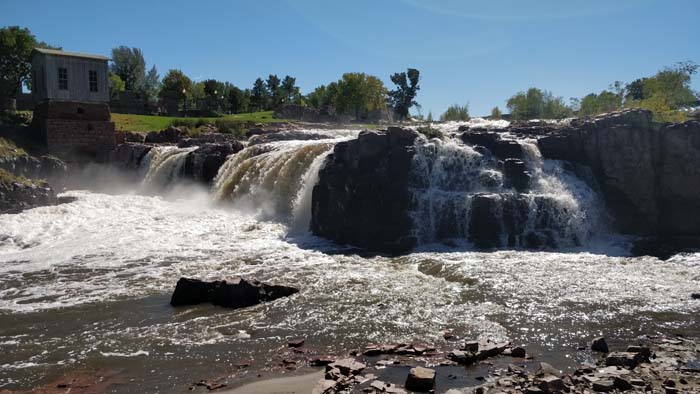 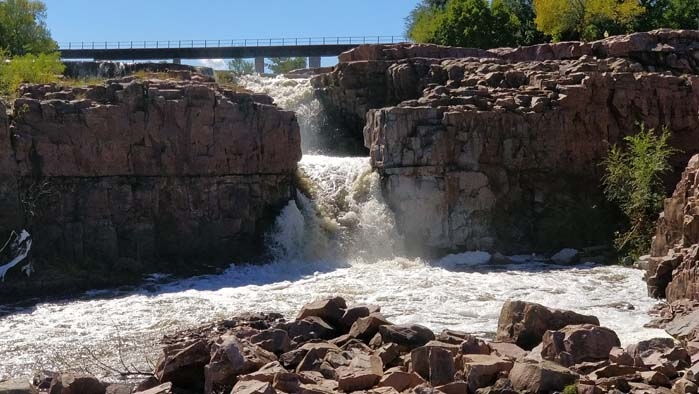 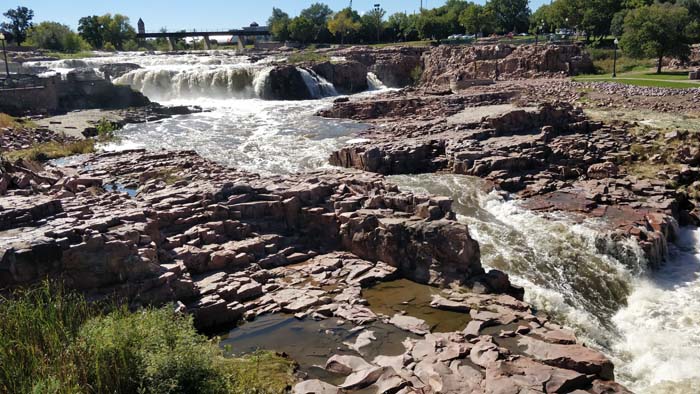 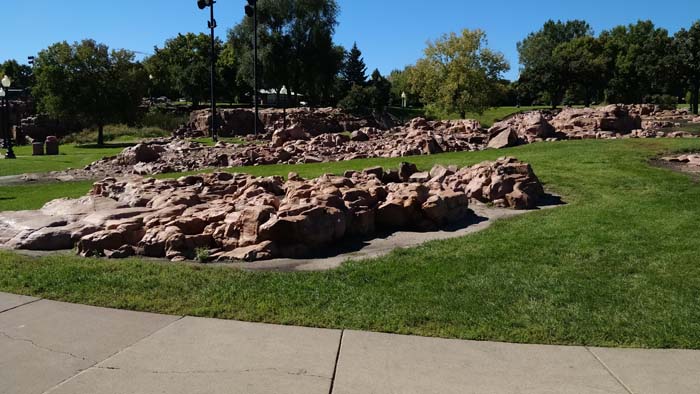 Back onto I-90 W and it’s more of the same as the morning. At least the weather is good and by lunchtime the temperature had increased as well. It was quite pleasant walking around Falls Park in the sunshine, no jacket required. As I enter Chamberlain I fill up with gas for the second time that day. Best Western Lee’s Motor Inn is at the end of the street, right by the Missouri River and the American Legion Memorial Bridge.

Chamberlain Is A Small Town

I cruise town seeing what’s there and it’s quickly and blindly obvious this is a very small town. I spot the bar I’d earmarked pre-trip and have a look through the window, but it’s very dark and looks a bit dodgy. After check-in at the motel there’s a Welcome Letter from the Manager in my room – which is good for such a reasonable room rate in a small town – and it mentions two places to eat: but not the place I chose, the Silver Dollar Bar.

I decide though to try it out later and if it doesn’t feel right just have one beer and leave. So around 8 pm I walk down Main St to the Bar. It’s very quiet inside, and a typical dive bar, but then I hear some folks playing pool in a back room. The barman is OK, not unfriendly but not very chatty. The only food on offer tonight is anything fried because their oven is broken. Which means chicken strips and to have them fried, which was about the only edible option. When they arrive they’re not bad, although I double-check the chicken is cooked thoroughly as I’m still a bit uncertain about the place.

The bar’s good I decide and opt to stay. Mistake. After finishing my food I’m about to start editing down my trip photos on my phone, when Dennis sits down next to me and orders a drink. A couple of minutes later he mentions to a passing friend that he’s been in the bar since 3.30 pm. It is now 8.40 pm. He then asks me who I am and what I’m doing. I explain.

“Oh I love English music. The British Invasion and all that. The Rolling Stones. Yardbirds. Eric Clapton. Herman’s Hermits.” he says. Eh? It is then that I realise Dennis, a 66 year old who obviously has nothing else to do, is absolutely paralytically drunk. Over the next 15 minutes he repeats every question he asks me at least three times. He similarly repeats his opinions about English music. He asks me four times what beer I’m drinking. And basically will not shut the f*** up.

He doesn’t listen to anything I say or the answers I tell him. He’s so drunk he can’t remember what he said two minutes ago. He repeatedly offers to buy me another beer and I keep hoping he’ll either fall over and pass out, or decide to go home and sleep it off. But no. He orders another drink. The barman does question him quite sternly – “Are you sure you want another?” Dennis of course replies in the affirmative. I’m surprised he understood the question.

So I’m screwed. He clearly won’t leave or move. If I move away to another seat or go to a table, it’ll be obvious I’m trying to get away from him and he might react badly. So I decide I have no choice but to leave myself, as I can’t stand listening to this drunken twat any longer. I ask for the check but when I get up and hand my money over, in my haste to leave, I forget to leave a tip. I do however at that time ask the barman for a quiet word at the end of the bar.

By the door, I explain to the barman I’m from the UK and just passing through town. And that he needs to know, if he hadn’t worked it out, that Dennis is extremely drunk. I suggest that he intervene to stop him from driving home when he leaves (given Americans drive everywhere). The barman says that I must have heard him query Dennis on the need for another drink, to which I reply yes I did. But I also add my own opinion – firmly said – that Dennis should not have anything else to drink.

The barman says he only lives a block down the street so he shouldn’t be driving. Well that’s good I say, but explain to him that I felt I had to say something about Dennis’ drunken state. I say goodnight and the barman says “Thanks for your concern. Good night.”

Indeed, but I’m really annoyed at effectively being forced out of the bar at 9 pm when I didn’t want to leave. Yes, apart from Dennis, it was quiet in there but the beer was good and other people may have arrived later. I walk home seething.

Luckily I’d stocked up on beer earlier and there was a fridge in the motel room so I had a couple while watching a 49ers vs Chiefs re-run from last Sunday on TV, then do some more diary.

I got to Chamberlain at 4.40 pm after 381 miles driving today, a new single day record for distance. But I don’t feel tired, in fact I haven’t any day so far, even with all the longer distances. Not that I think however, nearly halfway through the trip, that I’d want to drive such daily long distances again on a regular basis. But that was one reason for doing this trip – to find such things out.

Bed-time now but I’m seriously down about Dennis the Drunk. Hopefully my mood will brighten in the morning after a good sleep.

* Walking into Clarksdale by Page & Plant