I’m up reasonably early to visit Hearst Castle as all the tours have a timed start. Mine is 10.40 am for the Grand Rooms tour but there’s a 40 minute film – Building The Dream – which you can watch with some background to the Castle and it’s included in the tour price. This is also on at specific times as you would expect so I’m viewing that first then doing the tour, so hopefully my timings will work out. And what a wacky, way-out house (or mansion / castle) it turns out to be. Talk about a mix and mash-up of styles and architecture: 15th, 16th, 17th century, Spanish and Italian influences, 2000 year old marble pieces – all very weird but somehow compelling. Well worth a visit but it’s quite expensive and you don’t get to see that many rooms on each tour. There are various tours covering different parts of the castle so to see everything would cost a lot and take quite a bit of time. 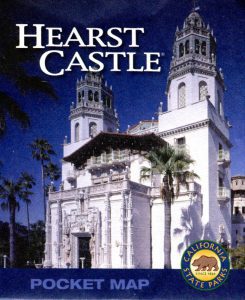 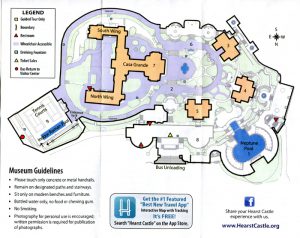 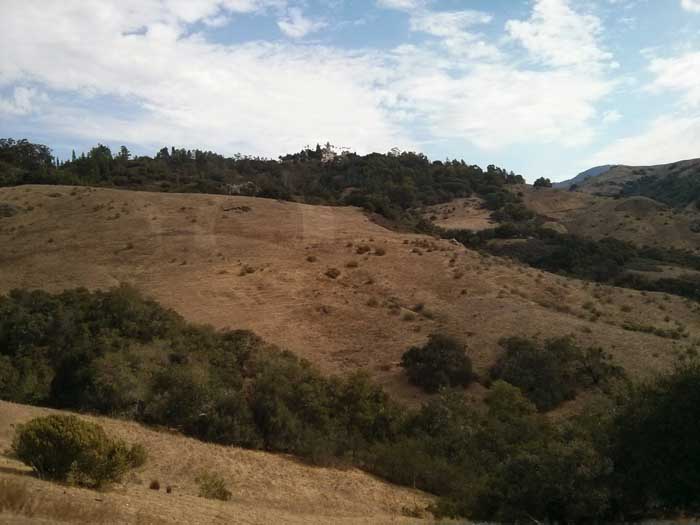 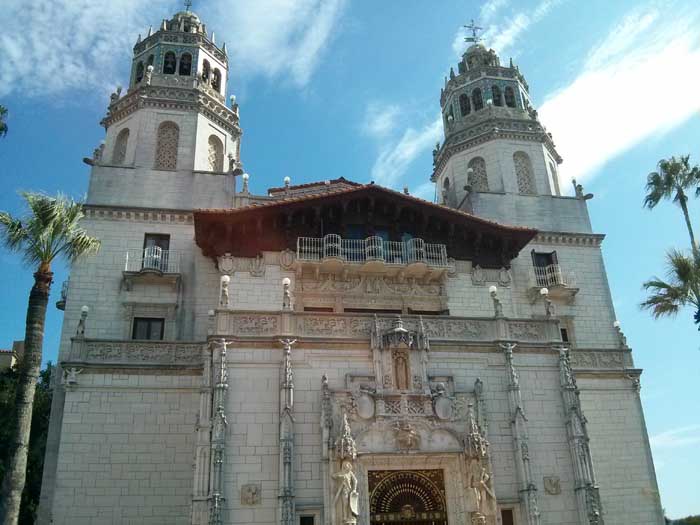 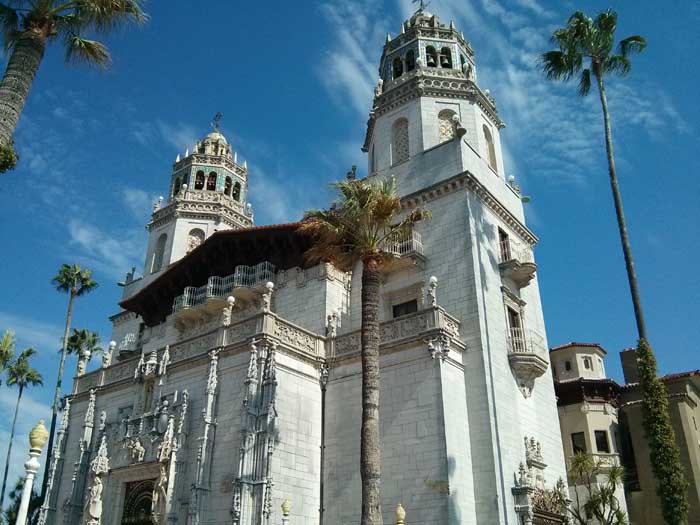 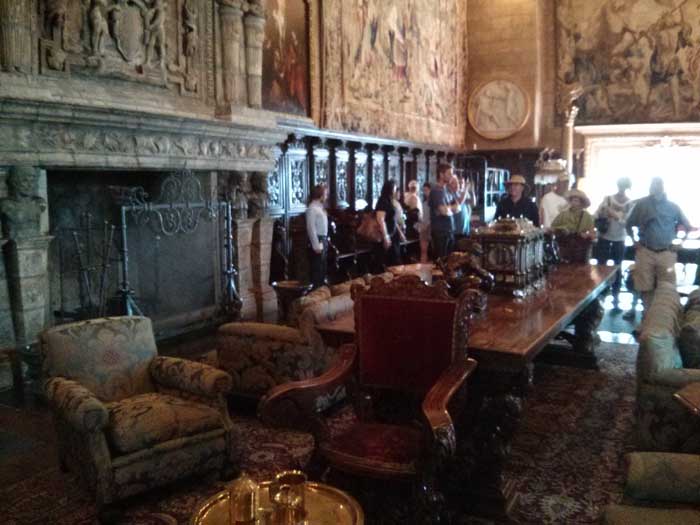 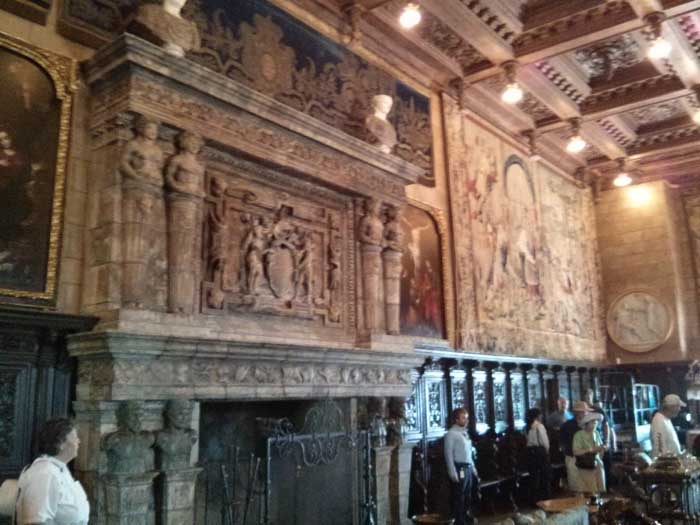 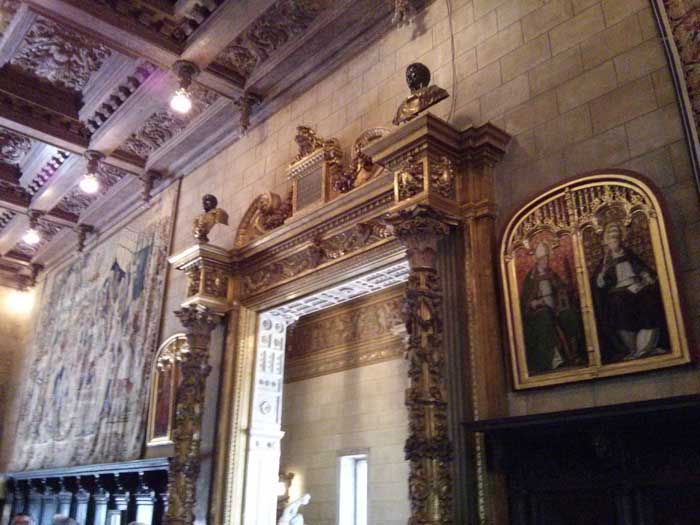 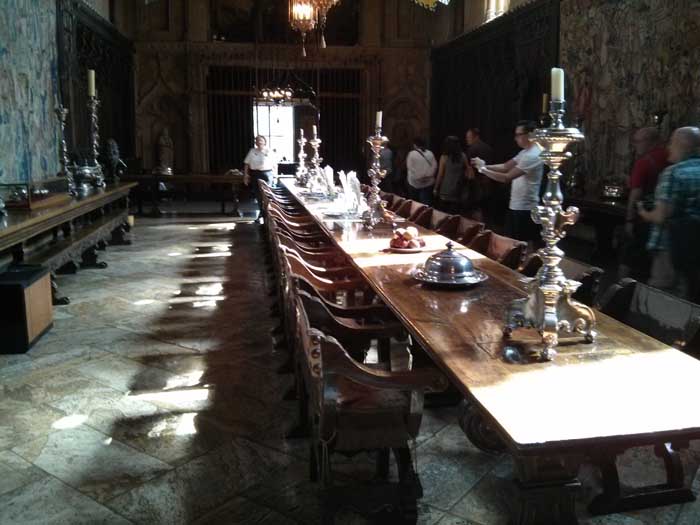 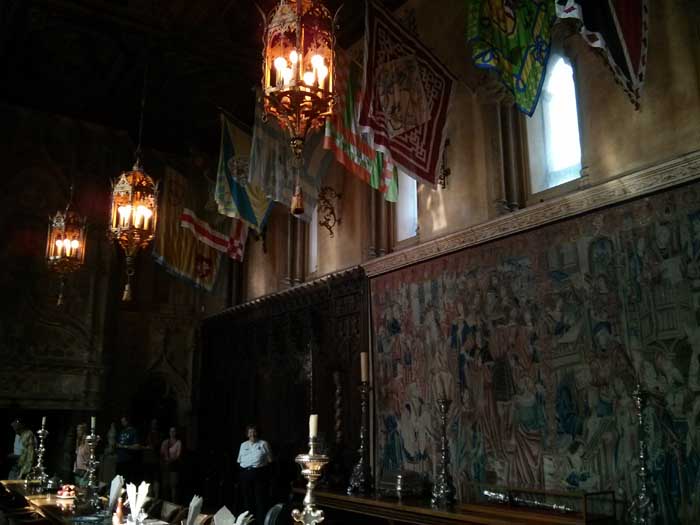 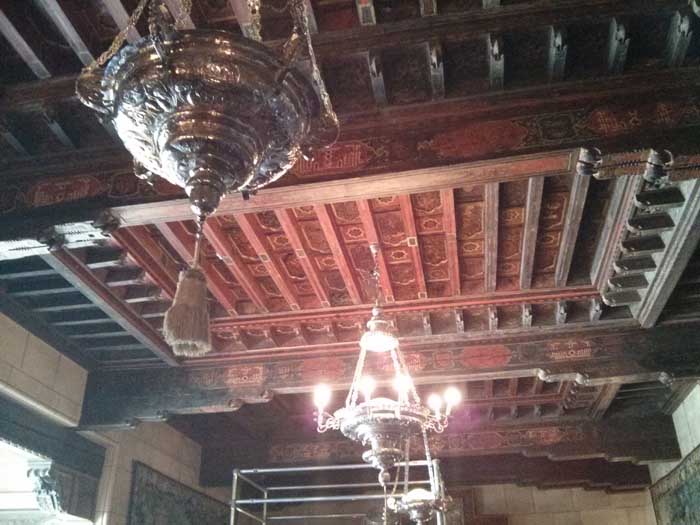 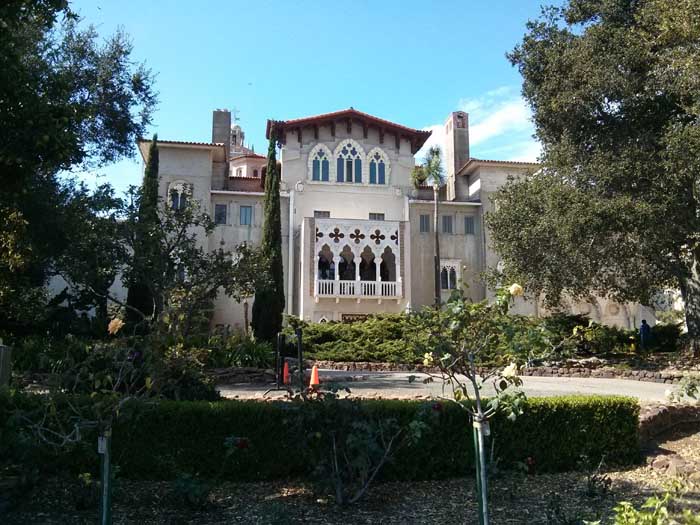 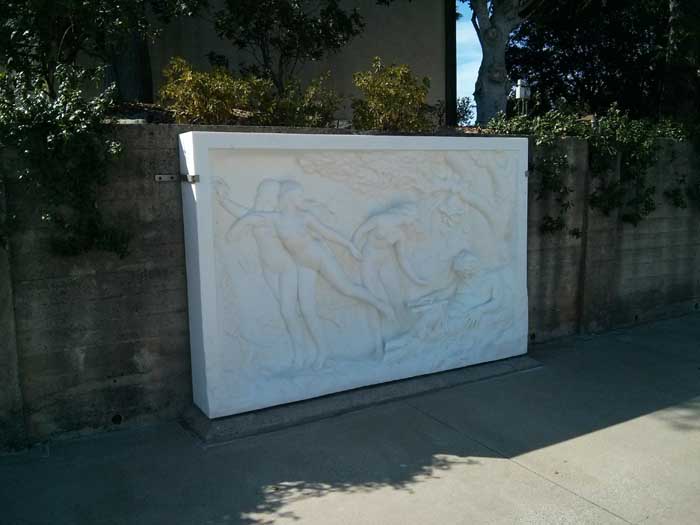 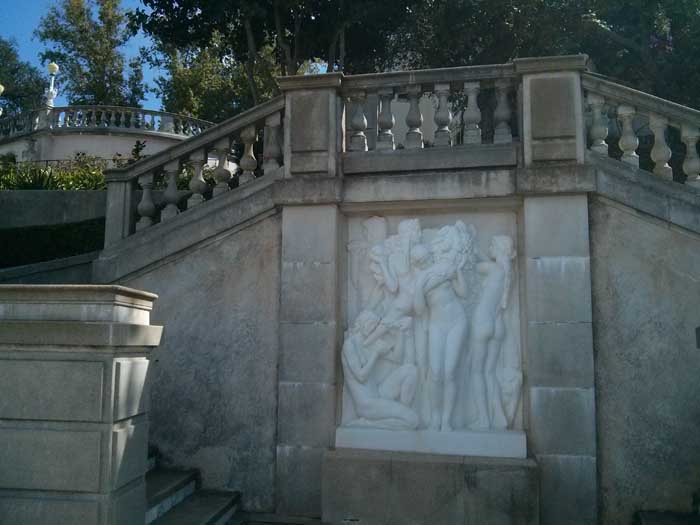 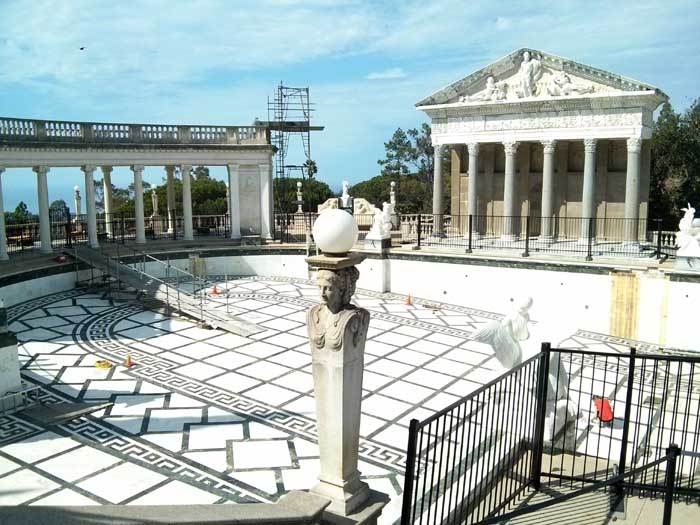 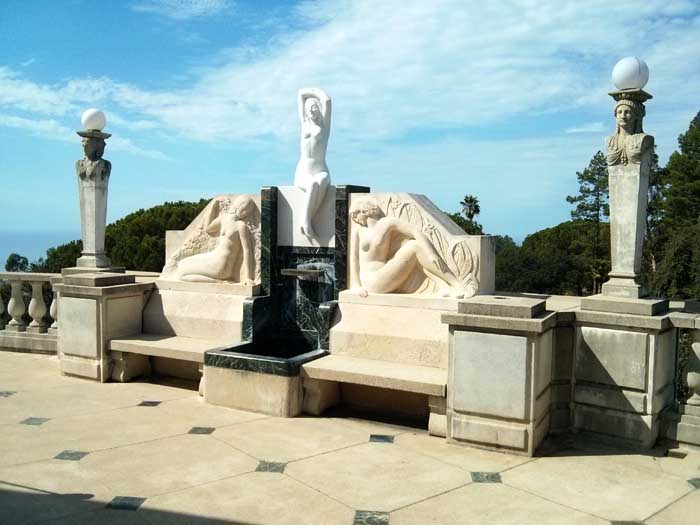 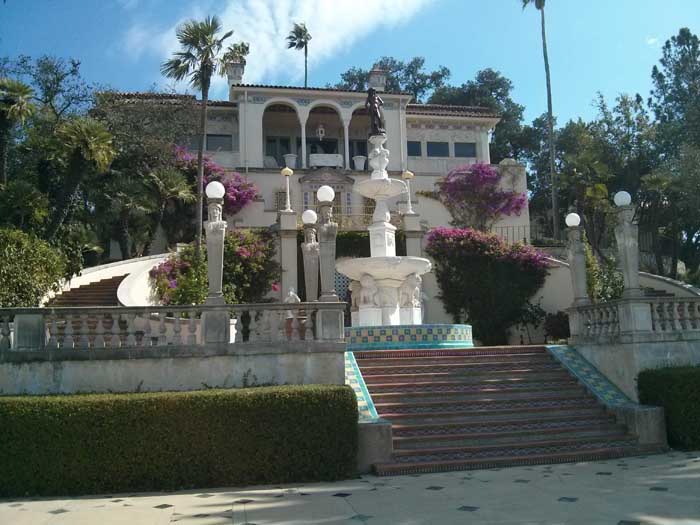 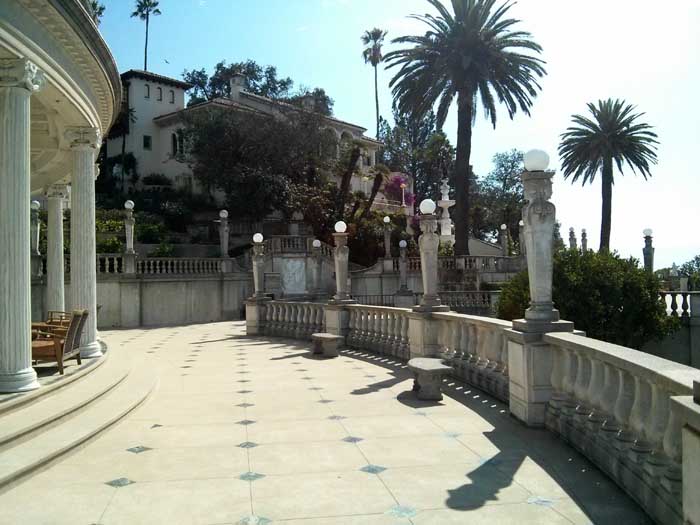 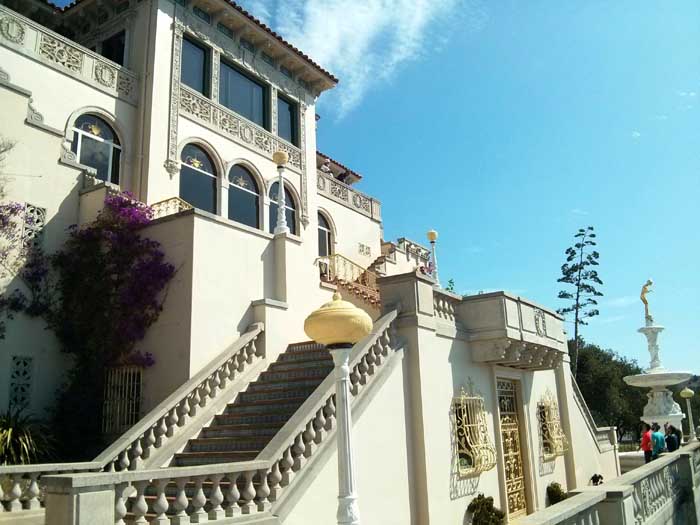 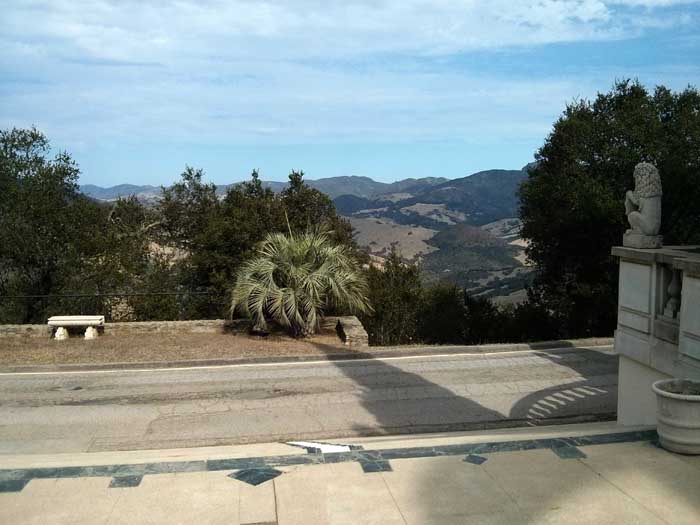 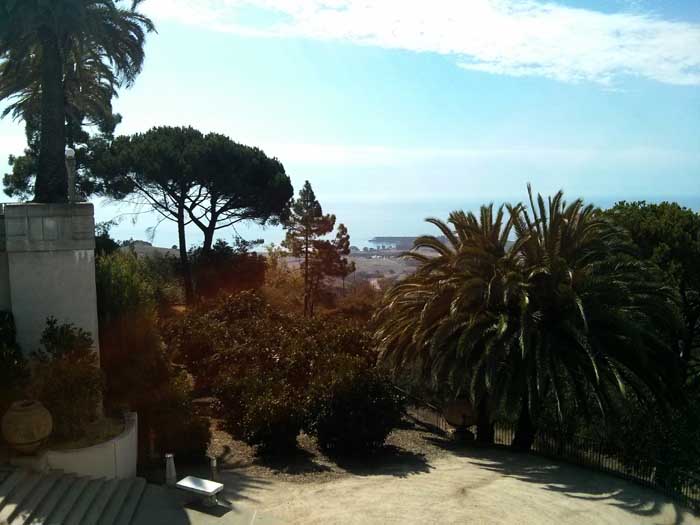 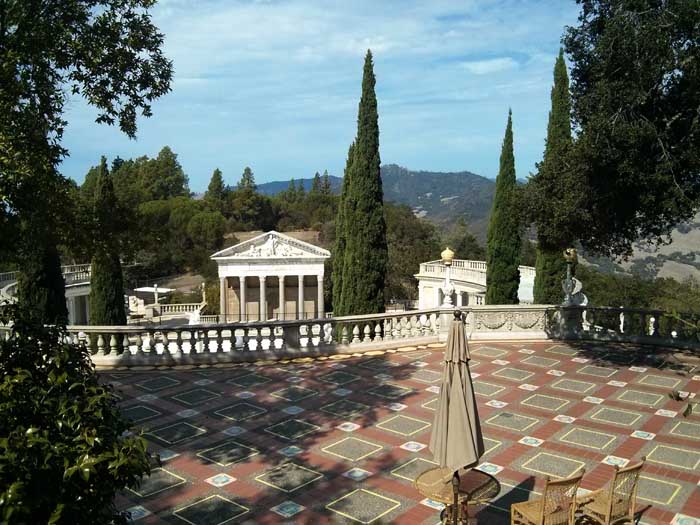 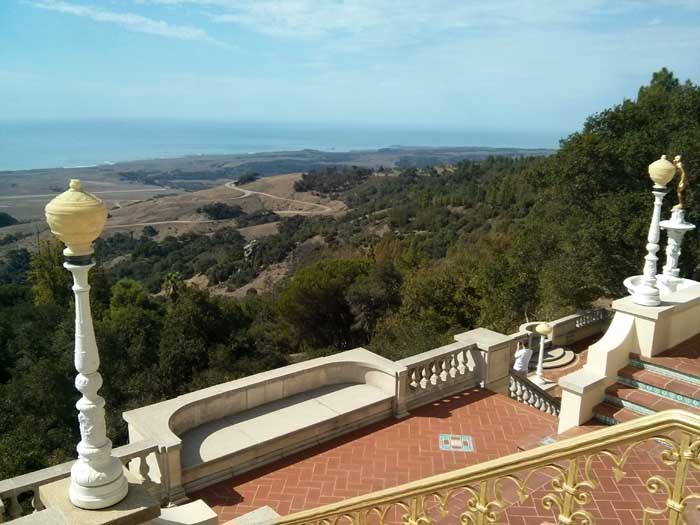 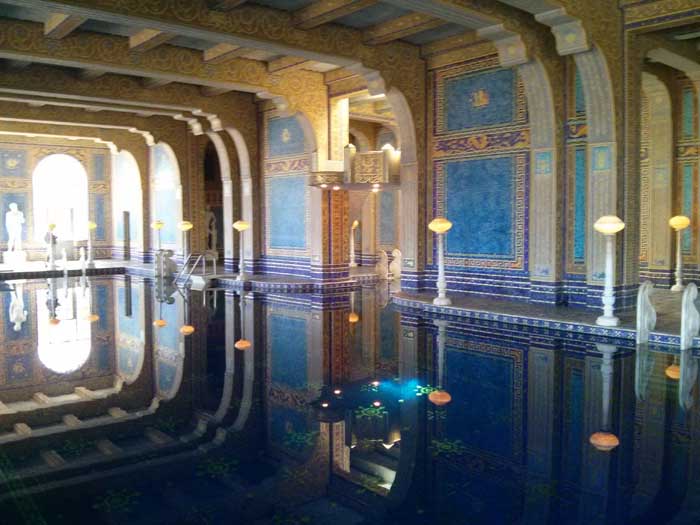 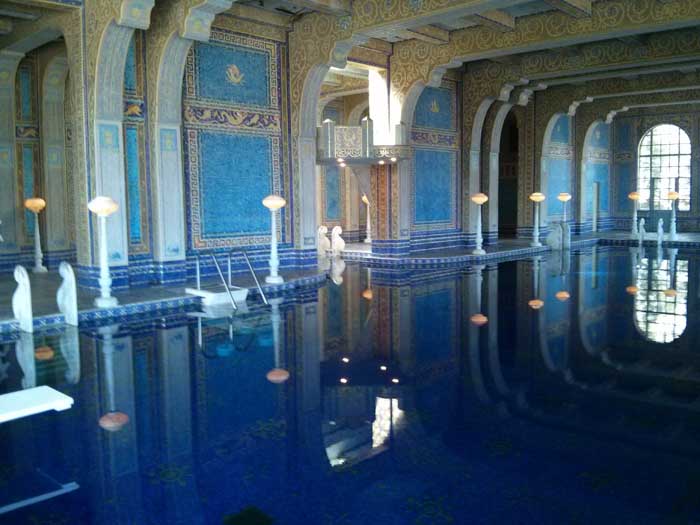 I leave the Castle at 12.45 pm and am back on Hwy 1 heading south. Today’s drive leaves and rejoins the coast at frequent intervals and there are also sections of freeway I think. I had to re-track north a few miles from Moonstone Beach this morning to get to San Simeon where Hearst Castle is, so pulling out of the Castle I’m re-tracing my steps a little. The road bypasses Cambria a few miles south and then on the way to Morro Bay. I can see the sea for the most part but after Moor Bay the map tells me it’s inland all the way to San Luis Obispo and no more sea views until around Pismo Beach.

I stop in Morro Bay by the marina for luncheon sandwich: I’d thought of staying here when planning the trip but it’s not a touch on Moonstone Beach, the latter being far more beautiful. The marina area looks a little drab and down at heel but it was only a small section of the town in what is quite a large bay, and the town seems spread out along the bay, most of which I didn’t view close up, so I may be being a little unfair on the place. Back on the road and I reach Pismo Beach which, as the PCH takes me through the heart of the town, seems a cool and funky place. There are lots of bars and surf shops, it definitely looks like a place to consider for an overnight stay if I ever do the PCH again. 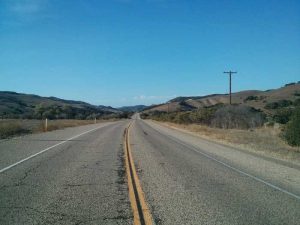 Through the town and I’m then inland again for a long stretch of road through farming country. It’s quite picturesque in places but mostly just flat, agricultural land. Just before Lompoc is the entrance to Vandenburg Air Force Base. Lompoc is a reasonable size town and once through there and towards Gaviota the road changes again and offers a great drive through rolling hills with nice views. Just before Gaviota Hwy 1 merges with Hwy 101 and I hit the coast again but now I’m on a 4 lane freeway. I can see the sea and coastline but I’m not right next to it, there’s a railway line in between, but it’s pleasant enough and the sun’s out again with blue skies. Again today in both late morning and early afternoon the sky clouded over at times, so it’s been another day of contrasting weather. 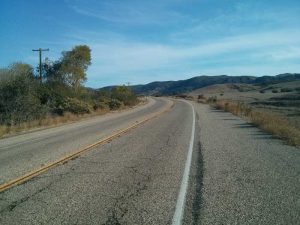 Scenery-wise it’s not a touch on the previous day – I don’t think anything ever will be, to be honest – but overall it’s been a good drive. Ditto the driving: today was another mix of contrasts and different road types and scenery: freeways in places plus 2 lane highway, some flat and straight, others twisty through hills. I did lose my way a couple of times because Hwy 1 merged with other roads and I wasn’t paying enough attention when the PCH separated off again – the road signs are designed to keep you on the major roads. For instance just before Vandenberg Air Base, Hwy 1 does a major right turn off Hwy 135. I’d merged with 135 a few miles before, but as 135 would take me all the way to Gaviota I was mistakenly focusing on the town destination, and not looking for Hwy 1, so I missed the PCH turn off 135 first time through and had to double-back. Keep alert boy! 🙂

Once the clouds came and went, it warmed up massively and it’s the hottest day so far, at one point reaching 94º F outside, with the day’s average being around 84 F. It is actually too hot and it’s not nice when outside of the car’s AC-cooled interior. 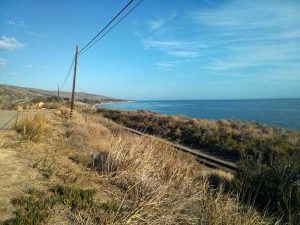 I turn off Hwy 101/1 and into the city of Santa Barbara. I arrive at the hotel’s road to find a farmer’s market has closed the street outside so I call the hotel to ask directions and I’m soon in the parking lot. The Hotel Santa Barbara seems quite decent, it’s an old hotel with character, not a modern glass and concrete construction. It’s perfectly located on State Street, where all the action is, a decision ratified when I venture out for dinner as there are bars and clubs galore, so a good choice so far. I decide on a Mexican-themed bar, Baja Sharkeez, 3 doors down from the hotel. It’s reasonably quiet inside but I sit at the bar and watch some sports on TV, have some mini tacos to eat, which are good despite sending the first batch back because they were tepid, not hot.

Afterwards I wander down State Street to the James Joyce bar where I’d seen a flyer earlier promoting live music inside. Teresa Russell is playing, a solo ‘artiste’ with an electric guitar but using an Apple Mac plus sound effects to create the sound of a full group or band. It’s difficult to tell what she’s actually playing and what the Mac is doing, but whatever she’s doing the locals in the bar love it. I’m not convinced. She’s doing covers and it appears she can actually play the guitar and sing so I wonder why she hasn’t got the balls to just play and sing on her own without the Mac. Maybe she hasn’t got the talent to do that but I can’t tell with the Mac providing the backing track. For example she does Freebird as a request and it sounds like a full band is playing, but she’s on her own just singing lead and strumming a guitar. It’s all just about OK – I mean she’s not crap by any means – but it just seems somewhat artificial to me. What is she doing and what is the Mac doing? I think to myself that it would be interesting if she stopped playing so I could hear the Mac’s backing music on its own. I begin to mischievously wonder if she’s even playing the guitar, or if it’s even plugged in. Anyway, it’s getting late, nearing midnight, so I call it a day and head back to the hotel to bed.